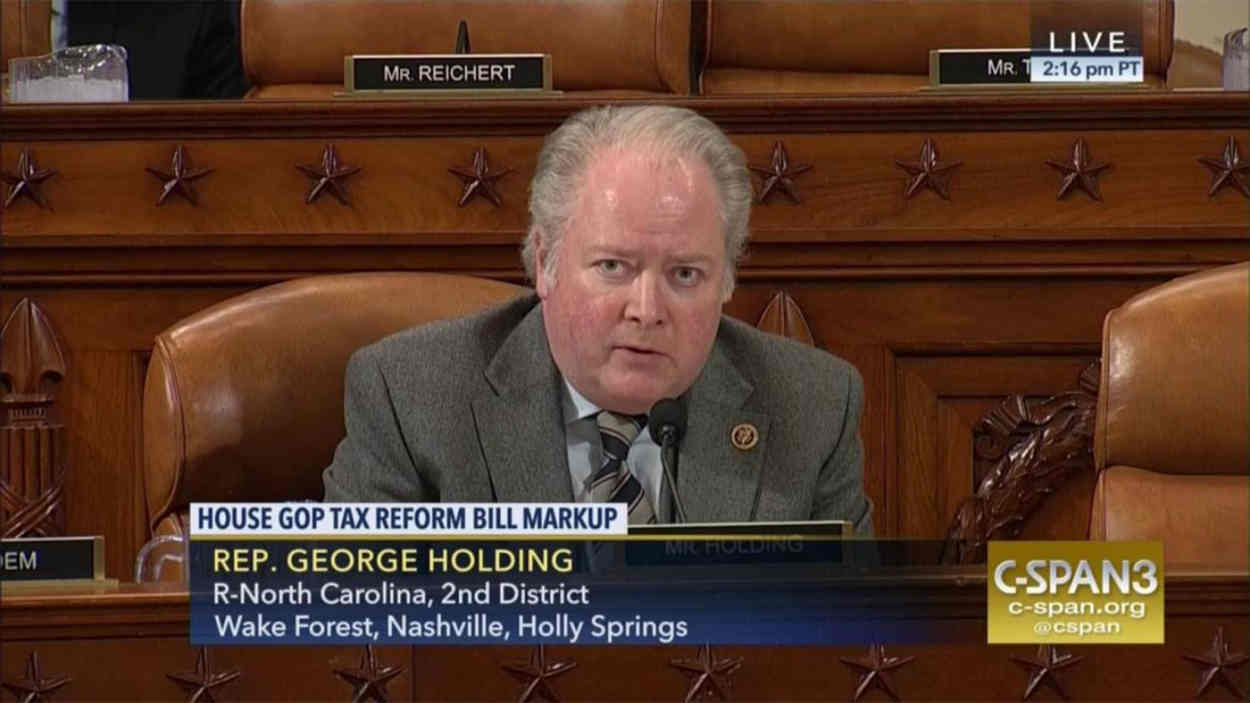 The re-election last week of House of Representatives member George Holding has revived talk about whether he will go through with his rumoured plans to introduce legislation aimed at making the U.S. tax regime less unforgiving for the millions of Americans estimated to live overseas.

Holding, a 50-year-old Republican from North Carolina, survived a challenge from a former Democratic lawmaker named Linda Coleman, who, the Raleigh News & Observer reported as recently as October 22, was running neck-and-neck with the incumbent Holding, who was seeking his fourth term in the House.

As reported, Holding has been rumoured  for months to be working on legislation that would give expatriate Americans the option of replacing the U.S.’s current citizenship-based tax (CBT) regime, as it applies to them, with a “territorial taxation for individuals” (TTFI) system. Those who would prefer to continue to be taxed under the existing CBT regime could, under this legislation, be allowed to do so.

The legislation has never been given even a working title, and failed to appear before the end of September and then October, when it had been expected to be unveiled. However, Holding, who had been involved in drafting President Trump's tax reform legislation, last December's Tax Cuts & Jobs Act – which has been strongly criticised mostly outside of the U.S. for its impact on non-U.S. resident expatriate owners of small businesses – has publicly expressed his concern about the problems expatriate Americans face as a result of the way the CBT regime affects them.

Holding's press spokesperson didn't reply to a request for comment.

However, today, Republicans Overseas chief executive and long-time anti-FATCA campaigner Solomon Yue said: "Congressman George Holding is getting his TTFI bill drafting done for this lame duck session. I am lining up as many co-sponsors for him as possible in advance, since we have only 20 working days in this session.

"The Senate is watching what kind of bipartisan support Holding is getting in the House for a TTFI companion bill to pass."

Thus far, the names of any Democratic members of the House who would be interested in co-sponsoring Holding's bill have not been made public.

Separately, a number of campaigners have stepped up their calls for Congress to take action, including lawyer and expatriate activist John Richardson, a Toronto-based dual citizen who works with American expats and dual citizens who are struggling with their citizenship-related problems, and blogs about the issues at CitizenshipSolutions.ca.

In a 4,000-word letter this week to Utah Senator Orrin Hatch, the Republican chairman of the Senate Finance Committee, and other members of that committee, Richardson urged them to "exempt [the estimated 7.6 million to 9 million U.S. citizens living outside the United States] from the "draconian taxes" they are being forced to pay, including those introduced as the "unintended consequences" of Donald Trump's Tax Cuts and Jobs Act (TCJA) last year, which he noted are "destroy[ing] the lives and retirements" of Americans around the world.

In a video clip posted last year by the American Citizens Abroad organisation, Rep. Holding is quoted as having said that he was "looking forward" to working to ensure that "American citizens" would be able to have "a level playing field around the globe as well."

Many American expatriates struggle with the U.S.'s citizenship-based tax regime because it requires them to file annual tax returns with the U.S. Internal Revenue Service for however long they remain abroad, unless they formally renounce their citizenship. They are also liable to pay U.S. tax on income that their country of residence doesn't tax, and may be subject to penalties if they fail to comply as required.

As a result, expatriates have been renouncing in growing numbers, and some so-called "accidental Americans" have been calling on the governments of the countries in which they have lived most of their lives to help them give up their citizenships more easily than is now legally possible.

"Obviously it is helpful to expats that Holding won," Richardson said last week, immediately after the results of the election had been announced.

"The simple fact is that he is a legislator who is actually trying to do something about this. He remains the 'legislative port of entry' into the legislative solution.

"On the other hand, the Democrats now control the House. That said, I believe that it has always been the objective for TTFI [Territorial Taxation for Individuals, a Republican-proposed alternative to citizenship-based taxation] to be a bi-partisan bill – meaning that it would have both a Republican and a Democratic sponsor.

"My gut feel is that it may now be easier to get TTFI enacted.

"My thinking is that if a Democratic sponsor can be found – and this is pitched as a matter of simple justice – that there may be less Democratic opposition than there might have been before, [as it would be being] introduced into a Democratic House."

Richardson added that the "best case scenario" now would be for Holding to introduce the legislation immediately, so that it could be introduced and passed in the lame duck session (the session that ends at the end of the year).

"There is certainly time to do this – whether there would be the opportunity is a different question."

Richardson said he remains "still confident that TTFI/RBT [residence-based taxation, another alternative to CBT promoted by the Democrats] will become the law. I am less sure of when."

What Holding's bill could propose

Holding, who represents North Carolina's Second Congressional District, is a member of the House Ways & Means Committee, and his role in helping to draft the recent tax reform bill (TCJA) was one of the things he called attention to during the recent campaign. (His seat had been identified as one at potential risk, according to the Ballotopedia website.)

Although details about Holding’s planned legislation have yet to be officially revealed, some – as reported here in September – have emerged, in part from individuals and advisers close to Holding and others involved in the bill’s drafting.

Among those who have shared what they know thus far has been Republicans Overseas' Yue.

Below are some of the points he and others have said that Holding’s bill would be likely to include:

• Expatriate retirees who currently benefit from receiving their Social Security payments tax-free, under the citizenship-based tax (CBT) regime, but who could face a tax on such payments under the proposed alternative tax system, based on where individuals live, would be allowed to continue to as they are.

• Individuals who own stakes in small overseas businesses would not be required to be taxed under the new regime for corporations, and to opt for a residence-based (TTFI) regime, if their total assets are below $US10m, and they meet certain other conditions as well, such as being able to show that they have been tax compliant for the past three tax years, and that their U.S. tax has not exceeded US$165,000 in any of the three years.

•  As the proposed legislation is understood to be worded now, expats would be able to elect TTFI status if they habe been in tax compliance for three years, with and/or without U.S. earned/sourced income. If they were to have only foreign earned/source income, they wouldn't, under the legislation, have to file tax returns and pay U.S. tax.

If they had both foreign earned/source income and U.S. earned/sourced income, however, their U.S. income would still be taxable, and they would have to file U.S. tax returns for this U.S. income.

Finall, if they had just U.S. earned/sourced income, they would probably, those familiar with the legislation say, be better off remaining under the citizenship-based tax regime, as noted above, because their Social Security income withholding would otherwise be taxed at 30%.

• Some means to "pay for" the bill: in other words, Congress will need to be assured that the tax income lost by granting some overseas-resident Americans TTFI status will be made up for in other ways. Exactly how the Holding bill would do this has not yet been spelled out.

Editor's note: This story has been updated twice, most recently on November 15.