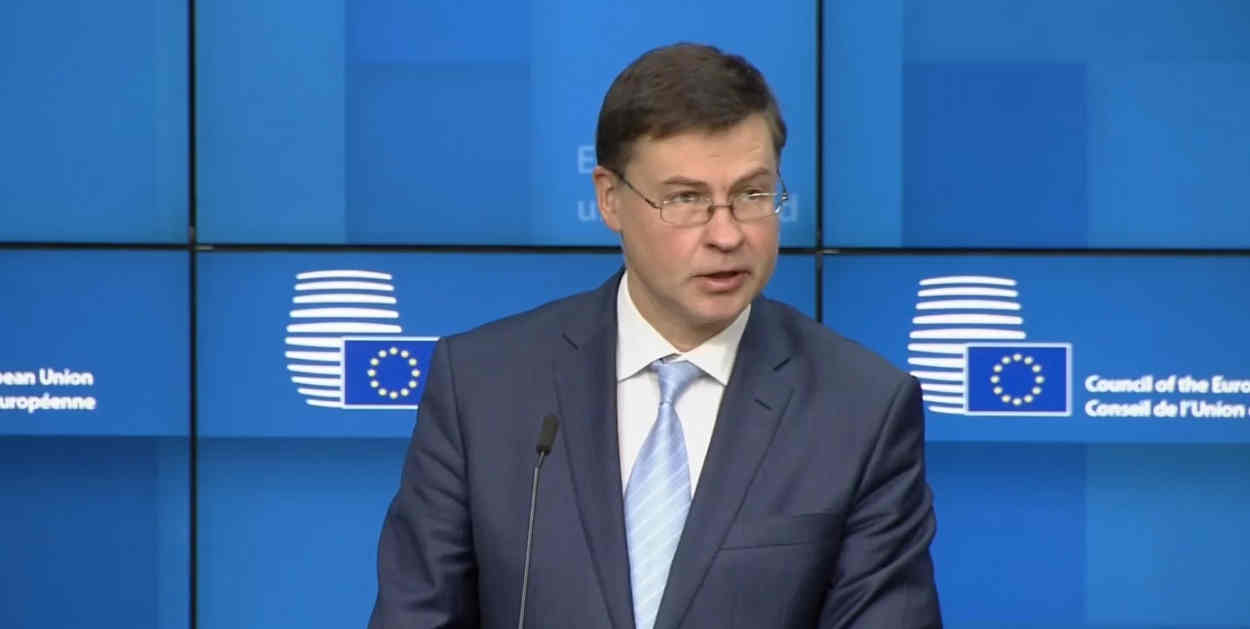 Last Tuesday's eagerly-anticipated (online) discussion of the controversial American tax law known as FATCA by the EU's Economic and Financial Affairs Council (ECOFIN) – which had been flagged up in advance by campaigners who argue that it causes a raft of problems for "accidental Americans" as well as ordinary American expats and dual U.S./EU citizens – failed to deliver any significant breakthroughs to the law's oponents, beyond ECOFIN's assurance that it stands ready to assist those member states that seek to challenge it.

In a press conference afterwards, EU Commission vice president Valdis Dombrovskis, pictured above, noted that the Commission had also "always stressed the need for the U.S. to address as soon as possible" the "many areas" about FATCA that have been raised in the past, "including reciprocity of the scope of data exchange; data protection and banking; factors impacting on individuals and financial institutions; and the lack of reciprocity, and loopholes in the data protection of EU citizens."

Dombrovskis said the Commission also "welcomed the initiative of the German Presidency" of the EU, which last December had asked the U.S. Treasury for a meeting on the topic of FATCA, and said it stood "ready to assist member states in these talks, whenever it is needed."

But after noting that the Commission "hope[s] to be able to be able to address [these issues] soon with the new Biden administration," Dombrovskis went on to point out, in answer to a journalist's question, that it was also "worth remembering that the FATCA rules are bilateral agreements between the U.S. and individual EU member states.

"Correspondingly, the Commission has no formal role in the implementation of those agreements, as long as the member states respect their obligations under the EU treaty."

As reported, Martin Kreienbaum, Director General of International Taxation and, until the end of December, the head of the German Presidency of the EU, wrote a strongly-worded letter to IRS Commissioner Charles P. Rettig" in which he said that, speaking "on behalf of the EU Member States" he wished to set up a meeting to discuss FATCA with the U.S. authorities "at the earliest convenience." The presidency of the Council of the EU rotates every six months, and is now held by Portugal.

While the FINCEN meeting may not have produced the dramatic "win" for its European opponents that some had hoped for, this didn't stop certain long-time campaigners from weighing in with their analysis of what was said – and what it all meant.

One of the first out of the block was Mishon de Reya partner and EU data protection issues expert and campaigner Filippo Noseda, who saw, in Dombrovskis' remarks, evidence that in fact there had been "long-standing talks between the [European] Commission and the U.S.," in addition to acknowledgement of "data protection issues" – as he pointed out in a letter dated Feb. 17 to Dr. Andrea Jelinek, chair of the European Data Protection Board, and copied to other EU officials.

Said Noseda: "Now that the open secret is no longer a secret, what will the Commission do to address the well-known [FATCA] data protection issues?

"The Commission has known at least since 28 November 2011 that 'our data protection experts believe that the U.S. data protection rules do not offer the same standard of protection as EU data protection laws', putting  FATCA on a clear collision course with the CJEU's judgment in Schrems II."

Schrems II" is what a European Court of Justice (ECJ) ruling last July has come to be known as, because it had its origins in a privacy law case involving a 30-something Austrian national named Maximilian Schrems, which ended in a decision that came to be known as Schrems I.

With Schrems II, the ECJ struck down the main mechanism used by the EU to protect the personal data of EU citizens when it's transferred to the U.S., the so-called "Data Protection Shield", which, as reported, in addition to its potential implications for FATCA, was seen as having major potential implications as well for social media companies like Facebook.

A few days after Noseda's letter, Fabien Lehagre, the U.S. born, France-resident 'accidental American' and head of the Paris-based Association des Américains Accidentels (AAA) wrote a letter to three EU commissioners (Valdis Dombrovskis, Didier Reynders and Paolo Gentiloni), as well as all the members of the European Parliament, in which he questioned why the European Commission was turning a blind eye to the fact that "FATCA violates [Europe's] General Data Protection Regulation (GDPR)" as well as a majority vote of the European Parliament on 5 July, 2018 that called for the human rights of those affected by FATCA to be respected.

Lehagre concludes his letter: "Why does the Commission not act in the face of the evidence?"

Cautious optimism
ahead of Feb. 16 meeting

Ahead of last week's meeting, the fact that ECOFIN was known to be planning to consider some of the issues surrounding the Foreign Account Tax Compliance Act, as FATCA is officially known, had been viewed by expat American and accidental American campaigners as potentially significant, as it seemed to suggest that European Union lawmakers could at last be beginning to acknowledge the scale of the problems FATCA causes EU citizens. 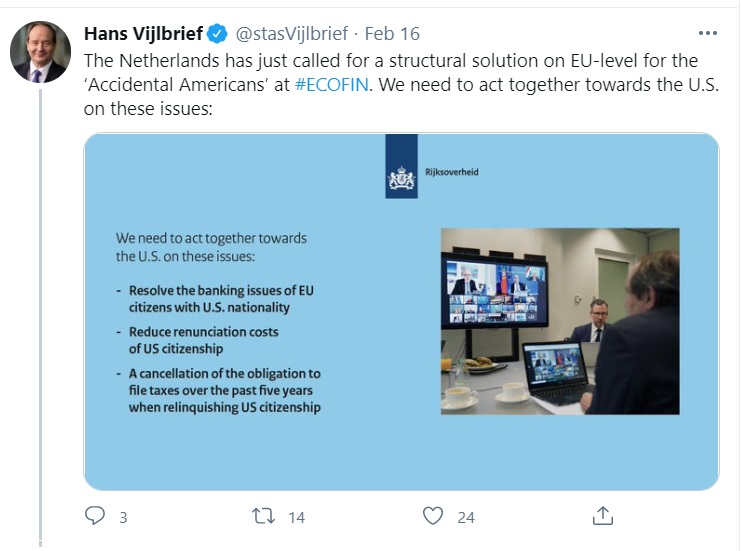 Political opposition to FATCA, particularly in France and the Netherlands (see tweet, left, of Dutch finance minister Johannes "Hans" Vijlbrief), has been growing, while a pushback at the EU level has also been seen, led by certain EU politicians, including Dutch MEP Sophie in 't Veld, and marked by such events as a European Parliament Petitions Committee (PETI) hearing in 2019 on the topic, as well as that resounding vote of the European Parliament in 2018 (470 votes to 43, with 26 abstentions).

Last November, four MEPs from four EU countries were among a series of speakers who criticized what they said was the European Commission's continued failure to address FATCA during a 36-minute hearing that was intended as a follow-up to that 2019 PETI hearing.

Among the problems FATCA has caused that accidental Americans in particular struggle with, as this and other publications have been reporting for years, include the way it makes non-U.S. banks and financial institutions extremely reluctant to have American citizens as clients, particularly if their U.S. citizenship ties are so distant that they lack such U.S. documentation as a Tax Identification Number, such as a Social Security Number.

But even ordinary American expats are often unwanted, because the  reporting involved in looking after them is costly- and time-consuming to the institutions in question, and also puts them at risk of significant financial penalties if they're found not to have fully complied with their FATCA reporting obligations.