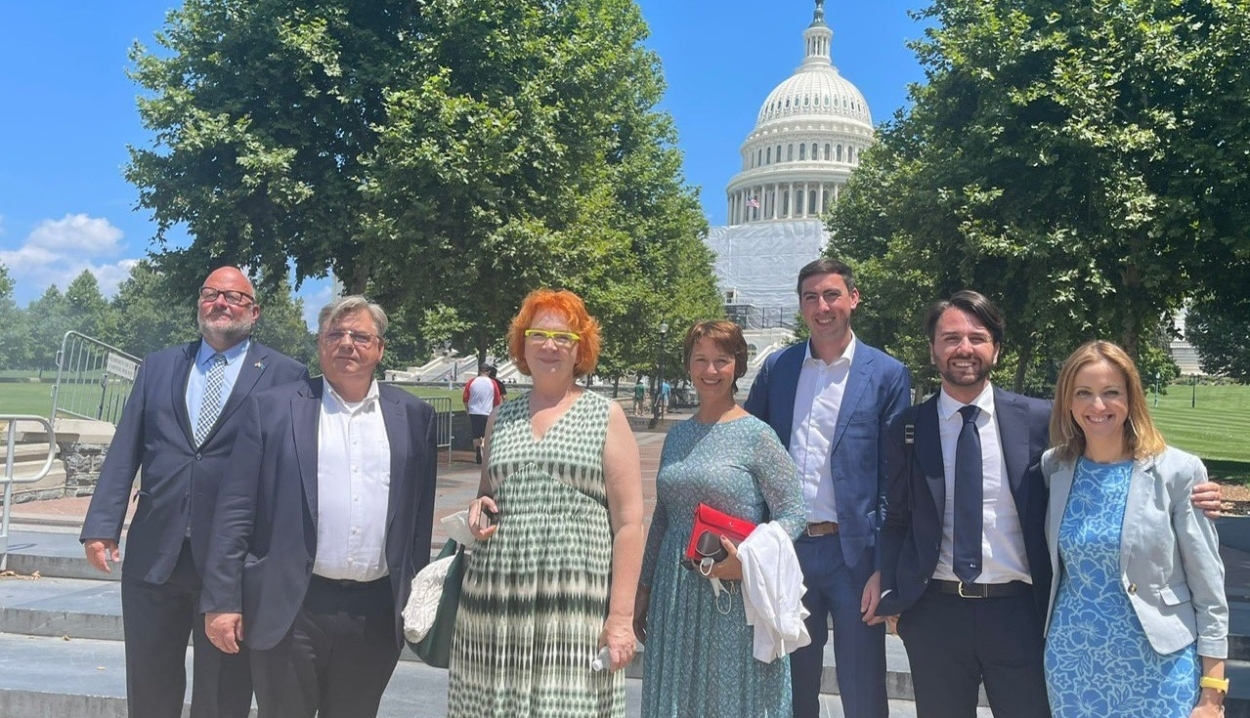 EU members of Parliament who participated in a just-ended, week-long "fact-finding mission" aimed at finding "concrete solutions" to the FATCA-related problems hundreds of thousands of EU citizens are struggling with, have described, in initial comments mostly posted on social media, how successful their visit seems to have been.

American and accidental American campaigners for fairer treatment by the U.S. tax authorities of U.S. citizens living in the European Union, however, said that they saw little reason for optimism that the mission would prove to be the much-needed catalyst for change that they had hope for. 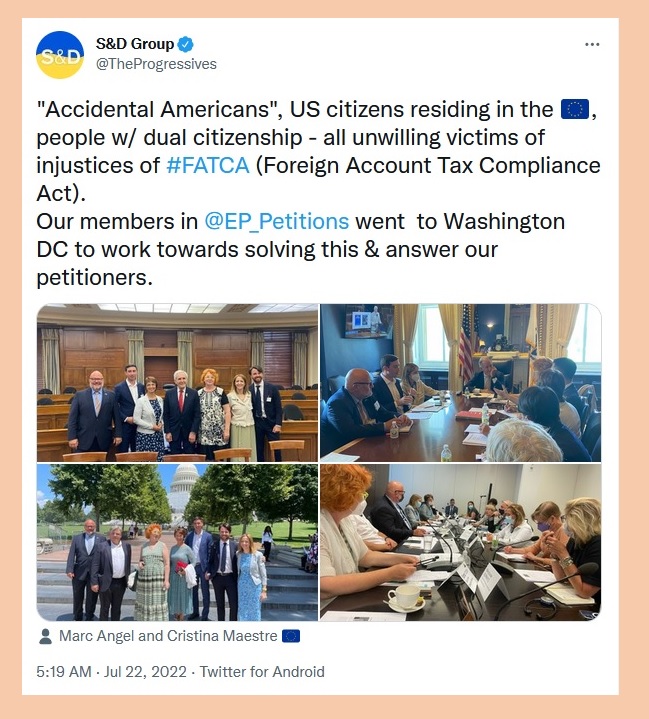 The fact that a U.S. lawmaker has submitted "a draft bill" designed to fix the "unwanted effects of FATCA," for example, they pointed out, is hardly a cause for celebration, as this and other bills have been submitted to fix FATCA (and other issues) in the past, and gotten nowhere.

And while the news that a Democratic member of the House of Representatives from Texas named Lloyd Doggett wrote a letter to Treasury Secretary Janet Yellen last month, urging that the "Treasury and IRS be willing to work with foreign governments and financial institutions to provide tailored FATCA guidance to ensure" that so-called accidental Americans might be able to continue to obtain bank accounts and banking services – even if they didn't or couldn't produce U.S. tax identification numbers – was a first for a U.S. member of Congress, as campaigners for  such accidentals pointed out, once again, such a letter, on its own, is still a long way from an actual "fix" of the problems mentioned in the letter.

As reported here last week, the EU Parliamentarians were members of the EU Parliament's Petitions Committee (PETI), which had decided to travel to Washington in an effort to engage in an "exchanges of views with tax officials, Senators and Representatives in Congress and stakeholders," and thus begin to solve the problems that a number of dual EU-U.S. national individuals, often referred to as "accidental Americans", have detailed in the petitions they've filed with PETI since 2016.

Two of the seven delegates – Marc Angel and Cristina Maestre – are members of the so-called Progressive Alliance of Socialists and Democrats (S&D), a sub-group of the Party of European Socialists (PES). Earlier today (Friday), the S&D tweeted about the PETI delegates' Washington visit in positive tones, and how their intention had been to "work towards solving" the "injustices of #FATCA", and in so doing, to "answer our petitioners". (See tweet, pictured left.) 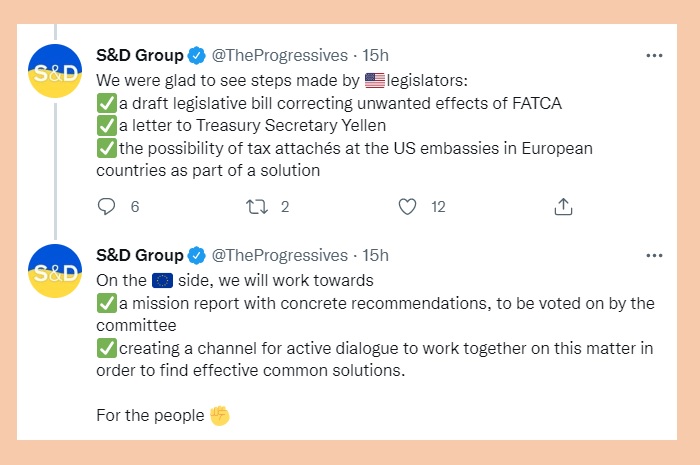 Their next two Tweets (pictured right) describe what the S&D representatives evidently saw as positive steps that have been taken in the direction of resolving the problems caused by FATCA – but which spokespeople for American expat organizations, as well a number of American expats and accidental Americans – told the AXFNJ were not only not an answer, but suggested that  some of these EU lawmakers may not have fully understood exactly how FATCA causes the problems that it does.

A number of these spokespeople declined to speak on the record, however.

"It's a delicate subject," said one anti-FATCA petitioner, while another stressed a desire to stay on good terms with the EU lawmakers, and expressed hope that this article might help to educate them about what actually is needed to fix the problems FATCA is causing.

("Assigning tax attachés to U.S. embassies located in the EU," this anti-FATCA campaigner added, "or anywhere, for that matter, as the S&D Group describes in its tweet as a positive development, in fact would not be. It would just enable American expats who are attempting to file their U.S. tax returns to do so the possibility that they might be able to do so more easily, in theory at least.")

Still another petitioner who requested anonymity told the AXFNJ that the PETI trip to Washington revealed, if nothing else, "the extent to which they have failed to understand our petition on the subject of FATCA, which we filed in 2021. 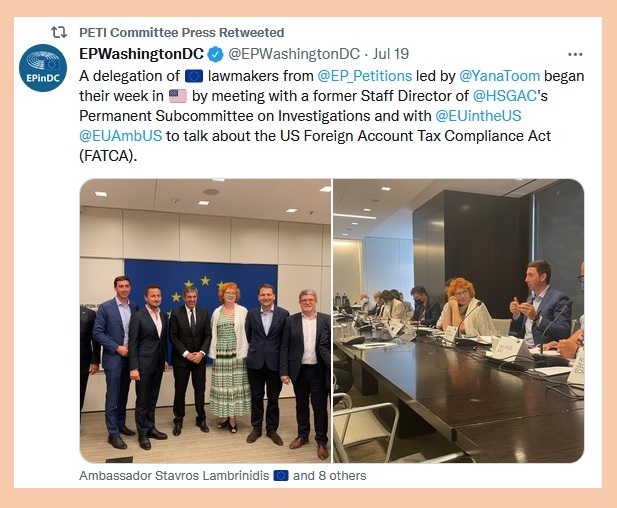 “As we see it, they are clearly failing to understand how it is not just the bank accounts of ‘accidentals’ being closed that is the problem, but how FATCA also enables us to be discriminated against in our mutual fund investments, in breach of both the Charter of Fundamental Rights and the TFEU."

"Throughout our petition – which required three years of intense research for us to pull together, mostly in the areas of EU and U.S. law -- we warned the European Parliament, ad nauseam, against conveniently laying the blame for our problems on the U.S.’s doorstep (as it always does, to avoid having to take responsibility for coming up with a fix themselves)," the PETI petitioner went on.

"For the purposes of our petition, we even created a website, comprised of some 1,300 relevant documents in an open-source format, for anyone to see, which included examples of some of the discriminatory prospectuses that were being produced at that time.

"But all of this has been met [in Brussels] by nothing more than a deafening silence."

'Move to a residence-based tax regime'

One advocate for American expats who was willing to speak on the record was Toronto-based citizenship lawyer John Richardson, who has never made a secret of his belief that almost all of the tax and other financial problems currently afflicting American expats would be solved by the U.S. moving to a residence-based tax regime, like  every other country in the world has, with the exception of Eritrea.

Richardson had been among a group of individuals who participated in the Washington event, in his role as a member of the expat advocacy group known as Stop Extraterritorial American Taxation (SEAT).

"I've not seen any of the PETI committee tweets mentioning this [RBT] as a possible fix, but they need to understand it, at least, because it would immediately remove expat Americans and accidental Americans from the need to file U.S. tax returns, or pay U.S. tax on any income they made outside of the U.S., on the understanding that they are already paying taxes in the countries in which they now live," he says.

In one fell swoop, Richardson adds, this would also remove the main reason non-U.S. banks and financial institutions are increasingly refusing to have American expats as clients, because they would no longer be obliged to enforce America's extra-territorial tax regime, even though the U.S. would still be able to rely on FATCA to monitor the overseas accounts of those U.S.-resident Americans who have overseas financial accounts – thus removing from wealthy Homelanders the ability to hide assets overseas.

It was the discovery of the relatively widespread use of non-U.S. banks for such a purpose, particularly in such places as Switzerland, that originally led to FATCA's introduction in the first place, in 2010.

As this and other publications have been reporting for years, FATCA has been causing issues for American expats and accidental Americans ever since it was signed into law, which was four years before it came into force around the world. A measure of the scale of the problem, as has been formally acknowledged by U.S. officials, has been the way American expats and accidentals have been giving up their citizenships since 2010,with more than 6,000 having renounced in 2020, compared with just 743 in 2009.

In spite of this, U.S. lawmakers have done almost nothing to address the problems attributed to the law in the 12 years-plus that it has existed.

In Europe, Dutch and French lawmakers have tended to be the most outspoken on the matter, but have struggled to win over enough of their colleagues to mount a challenge that would have a chance of getting the U.S. to change its approach.

The case for EU officials to get involved would seem strong, but here too, opinions vary, with some arguing that because FATCA is implemented through intergovernmental agreements (IGAs) signed between the individual EU member countries and the U.S., any formal challenge to FATCA should be left up to the individual countries themselves to carry out.

Another FATCA challenge has taken place in the European Court of Justice (CJEU), where, as reported, the main mechanism used by the EU to protect the personal data of EU citizens when it's transferred to the U.S. under FATCA was struck down in July of 2020.

Beginning in 2016, frustrated European citizens began taking matters into their own hands by submitting petitions on the subject of FATCA to the European Parliament's Petition Committee, evidently because of its willingness to listen to and represent individual EU citizens.

PETI has held a number of hearings on the subject, beginning in 2017; this was followed up with a major hearing in November of 2019. An online hearing took place in September of last year, at which some of those who most recently had their petitions on FATCA-related issues accepted by the Petitions Committee were able to testify.

Meanwhile, as a report posted on the Dutch news website NRC.nl on Tuesday noted, the clock continues to tick for "unintentional Americans" (a Dutch term for accidentals) in the Netherlands, as those banks that have been willing to continue to accept such individuals as account-holders until now have warned that they cannot continue to do so after Sept. 1, a date that was apparently agreed to by U.S. officials when it was announced last year.

NRC.nl, which is part of the NRC Handelsblad media group, has been closely following the issue of those Dutch citizens with "unintentional" American citizenship for the last several years. In its report on Tuesday, it noted that although talks between Dutch government officials and their U.S. counterparts have been ongoing, they have "not led to any results" as of yet, and the deadline is only a little more than a month away.

"The Dutch government, together with the French, among others, has proposed that the Americans make an exception for those [dual U.S./European citizens] who have European passport, pay taxes in an EU country, and who have very limited ties with the U.S.," an English translation of the article notes.

"If that is not possible, [Dutch] Secretary of State Marnix van Rij hopes to hear from the IRS whether a bank can avoid being fined [if found to have an American citizen account-holder whose Tax Identification Number or Certificate of Loss of Nationality it has failed to produce] if it can demonstrate that it has done enough to obtain a TIN or CLN from the customer. Then there would be less pressure for banks to close accounts.

"The Secretary of State also hopes that it will be much cheaper to relinquish American citizenship.

"He wants to report on further progress before 1 September."

The NRC.nl article concludes by noting that the U.S. "does very little with the [American overseas bank account] information that it receives from around the world," citing comments made by IRS Commissioner Charles Rettig earlier this year, to the effect that the IRS lacks the money "to dig through all the data and further investigate possible tax evasion".

Editor's note: This story is still evolving and may change, as fresh information comes in. Participants in the PETI "fact-finding mission" have been invited to comment, but thus far, have limited themselves to social media outlets such as Twitter and Facebook.