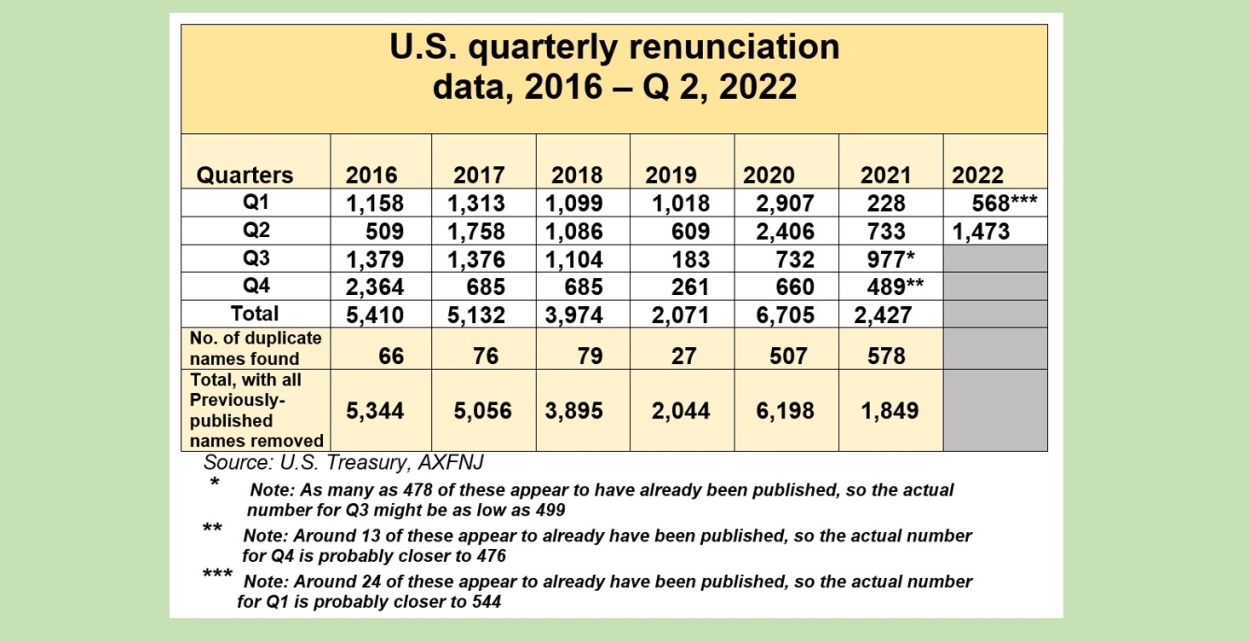 The number of Americans who formally gave up their U.S. citizenships during the second quarter of 2022 was the fifth-highest ever, based on the latest quarterly list of names published in the Federal Register.

According to this list, some 1,473 Americans gave up their U.S. citizenship in the second three months of this year, more than twice as many as in the first quarter, and the most since the second quarter of 2020, when 2,406 names were published (see tables, above and below).

Renunciation-list watchers said the larger number reflected the fact that more "Loss of Nationality" offices in U.S. embassies and consulates around the world have at last re-opened, after having been closed for almost two years in some cases in response to the Covid pandemic, and are beginning to deal with what is said to be a significant backlog of applications to renounce. (The AXFNJ has made a request to our source on this matter, and will update this story if we receive a response.)

Among the names that were not on the latest list – which may be viewed on the Federal Register's website by clicking here – was that of Billie Joe Armstrong, the lead vocalist and guitarist of the Green Day rock band, who made headlines in June during a concert in London with his vow to "f**king renounc[e] my citizenship!", citing the then-just announced U.S. Supreme Court decision to overturn Roe v. Wade, and thus eliminate the constitutional right of American women to have an abortion.

Last month, an English-language online publication in Switzerland called TheLocal.ch reported that some 600 U.S. citizens were said to be "waiting in line to renounce their citizenship" in Switzerland alone, quoting as its source an "American reader named Sean" who, in turn, cited a letter he had received from the U.S. Embassy in Bern.

According to this source, the letter read: "Please note that we have a waiting list of well over 600 customers and are scheduling appointments in the order in which we receive the requests. At the moment we are scheduling customers who contacted us in May 2021.

It may yet be some time until we will be able to offer an appointment to you, we anticipate a waiting time of roughly 12 months."

Only known source of renunciation data

As regular AXFNJ readers know, in the absence of other publicly-available data from the government, the Federal Register's quarterly lists of renunciants' names are closely monitored by many citizenship advisers and others in the American expat community, as well as by many of those who are currently in the process of renouncing, for whom the publication of their names is seen as proof that the process has at last been completed.

However, there's long been a consensus that the Federal Register's lists are far from perfect – almost to the point of irrelevance, not only because some of the names have appeared before, but because it's said not all the names appear on these lists, but on other ones, although this has never been confirmed.

Whether or not the names of Green Card holders – who are not technically U.S. citizens but citizens of other countries who have been given “long-term resident” tax status in the U.S., which requires them to formally apply to be released from this – are included on the Federal Register’s quarterly lists has, meanwhile, been a matter of some debate, although though the introduction to this list says that it does.

Unlike those seeking to give up their citizenships, who are obliged to appear in person at a U.S. renunciation-processing facility at least once in the process, Green Card holders are able to complete the handing-back process by mail. (This is why some observers said that the Federal Register's Covid lockdown lists would most likely have consisted mostly of Green Card holders' names, at least once a names backlog long believed to exist had begun to have been worked through.) 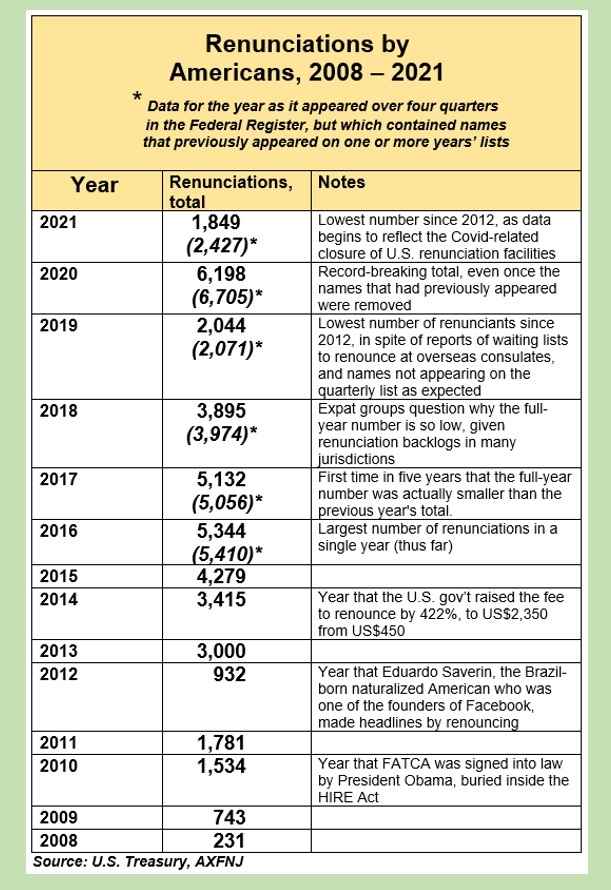 These lists of names of those who have formally renounced their U.S. citizenships dates back to the 1990s, when the process was introduced during the Clinton administration, at a time of heightened concerns about certain wealthy individuals giving up their U.S. citizenships. It was formally introduced in April, 1995 by a Florida member of the House of Representatives named Sam Gibbons, who was the senior ranking Democrat on the Ways and Means Committee at the time, according to contemporary reports of the list's origins.

According to these reports, the thought was that the publication of the names of those renouncing their citizenships would serve as a disincentive to those who were considering expatriating.

It was only after the Foreign Account Tax Compliance Act (FATCA) was signed in 2010, and began to affect expats by making it more difficult for them to find banks and investment companies that would continue to have them as clients, that renunciations began to soar, (see table, left).

The publication of the latest list of renunciants' names came as media organizations around the world were reporting a noticeable spike in the numbers of Americans who have been heading abroad to live.

Last month, for example, in a story headlined "Americans Who Can't Afford Homes are Moving to Europe Instead", Bloomberg reported that "prohibitive housing prices [in the U.S.], a strong dollar and political rancor [at home] have contributed to a wave of Americans relocating to Europe".

According to Bloomberg, "Italy, Portugal, Spain, Greece and France are among the most popular destinations. Sotheby’s International Realty said requests from Americans looking to move to Greece rose 40% in the April-to-June period, compared to a year earlier.

"In France and Italy, U.S. demand is the highest it’s been in at least three years, according to Knight Frank real estate specialist Jack Harris.

"And Americans made up 12% of Sotheby’s Italian revenue in the first quarter, compared to just 5% in the same period a year ago."

On the other side of the planet, meanwhile, locals in Mexico are reportedly becoming increasingly fed up with the waves of "digital nomads" and other categories of Americans, a Los Angeles Times article reported last month.

The article, headed "Californians and other Americans are flooding Mexico City. Some locals want them to go home" described how the influx of Americans had "accelerated since the onset of the Covid-19 pandemic" and was seen as "likely to continue as inflation rises", and in the process "is transforming some of the city’s most treasured neighborhoods into expat enclaves."

The flood of Americans was made easier, the article pointed out, by the fact that Americans "have long been able to stay here up to six months without a visa," and the country is also well-known for having more American citizens living there than any other country beside the U.S. itself – around 1.6 million, according to the U.S. State Department.

While few of this new wave of remote workers are likely to be considering giving up their U.S. citizenships yet, if the issues that have led thousands of American expats to head for the exits since FATCA came into force continue not to be fixed, it is likely many of those who stay on in Mexico will also begin looking into their renunciation options – in spite of what the LA Times article says is a growing push-back from the increasingly fed-up chilangos.