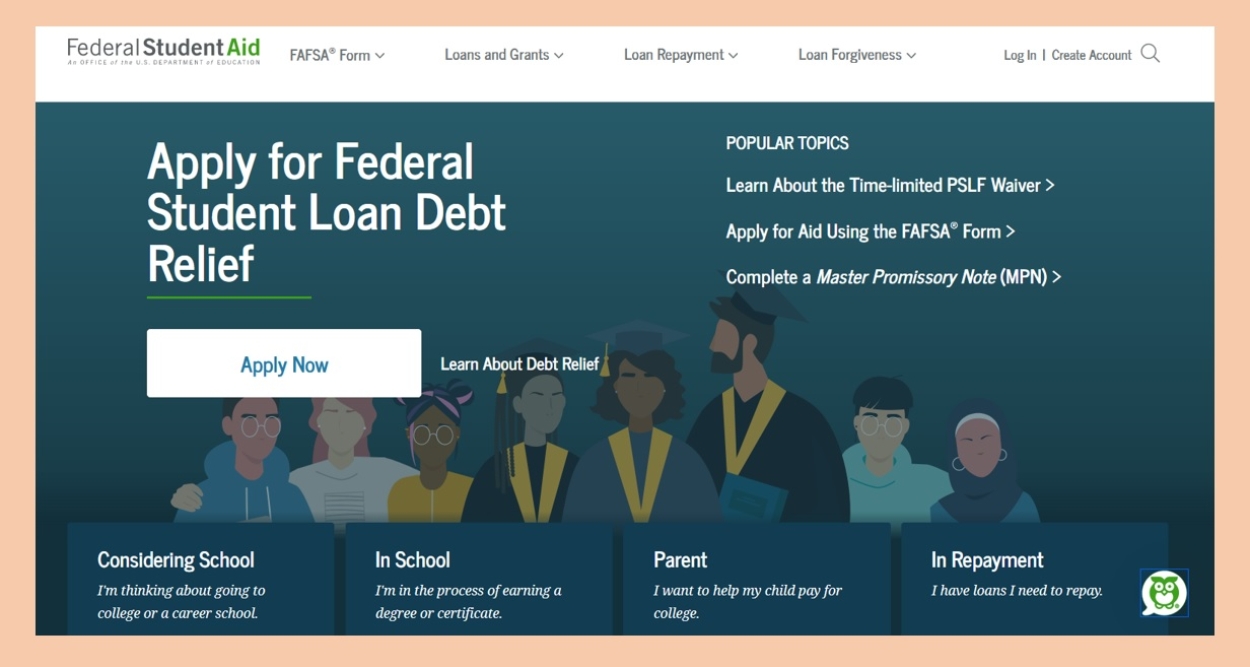 Technical problems that were preventing U.S. expats from being able to access online forms that would enable them to apply for help with their outstanding student loans, under a recently-launched government program, have apparently been resolved, according to Democrats Abroad spokespeople, who had been calling on U.S. Department of Education officials to address the matter.

For now, however, as reported here last week, Federal Student Aid department officials are temporarily blocked from processing such applications, owing to a federal appeals court decision until such time as the St. Louis, Missouri-based court had had a chance to rule on what media reports described as "an emergency request by [six] Republican-led states to block" the new aid program, which had been issued on Oct. 21 by the 8th Circuit Court of Appeals.

Officials stressed last week that the temporary order would not prevent holders of the types of student loans in question from applying for student debt relief under the new scheme, nor bar the Biden administration from reviewing such applications and preparing them for transmission to their respective loan servicers.

It isn't known how widespread the problem expats were having in seeking to access the new Biden student loan relief program was, as it emerged mainly on social media websites, such as Twitter.

Now, though, anyone in London – and, we are told, elsewhere in the world as well – who types " https://studentaid.gov/ " into their computer will see the image shown above, with the words "Apply for Federal Student Loan Debt Relief" in white letters, above a stylized image of eight eye-less, mouth-less students.

By clicking on a white box that says "Apply Now" (beneath the white letters) they're given what is apparently the application form in question, with a note at the top about the fact that although applications are being accepted, "as a result of a court order, we are temporarily blocked from processing debt discharges". 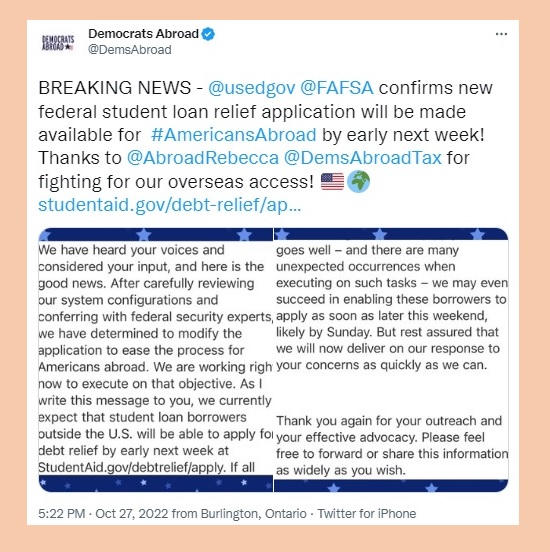 News that the problem was being addressed and would soon be fixed emerged on Twitter on Thursday evening, in the form of an announcement (see tweet, left). On Sunday evening (Oct. 30), Democrats Abroad Taxation Task Force chair Rebecca Lammers posted an "update" in which she said that the online application form for the new student loan relief program was "now available", adding that if expats living abroad were "STILL getting an error message when trying to access the form" that there were certain "troubleshooting steps" to try.

(These may be seen on the Democrats Abroad's website by clicking here.)

Providing direct help to the estimated 43 million Americans who reportedly struggle with their student loan obligations was among President Biden's campaign promises when he ran for election in 2020, but it took him and his staff until August of this year to bring it into being.

According to the Democrats Abroad, the plan provides for debt cancellation of up to US$10,000 for student loan-holders who currently make less than US$125,000 a year, "with recipients of Pell Grants qualifying for up to US$20,000." Pell Grants are a form of Federal subsidy that's offered to certain eligible students who wouldn't be able to attend college without it.

One of the less-well-known provisions of the Student Loan Relief program is that going forward, monthly federal student loan payments will be capped at 5% of a borrower’s discretionary income (down from 10%), and institutions of higher education are to be held to "new standards of accountability for rising tuition costs", according to the Democrats Abroad.

Editor's note: This story has been updated since it was first posted, to include input from the Democrats Abroad. In the meantime, if you're an expat who has attempted to access the new Federal Student Loan Debt Relief application form from abroad, were you able to do so? Or are you still having problems? Do let us know!

Please email This email address is being protected from spambots. You need JavaScript enabled to view it., and tell us how it worked – or didn't work – for you...