As regular readers of the American Expat Financial News Journal may recall, a story about U.S. Social Security benefits that we ran in October highlighted the fact that many expats are surprised to discover, when they formally apply to begin receiving their Social Security payments, that they are line to receive significantly less than they say they had been led to believe they'd be getting.

As reported, this "Expat Retirement Surprise" is due to the effects of something known as the Windfall Elimination Provision, or WEP, which was introduced by the U.S. government in 1983, to, in the Social Security Administration's words, "prevent workers who receive non-covered pensions from receiving higher Social Security benefits, as if they were long-time, low-wage earners"...

From that point onwards, the government began to apply a formula to individuals' Social Security pension pots that took into consideration retirement income that the U.S. government knew this individual was also receiving, or destined to receive from other sources – the so-called "windfall" that the WEP was designed to eliminate.

According to the Social Security Administration, the WEP applied to just 3% of all Social Security beneficiaries, or 1.95 million out of a total of 64.85 million recipients of SS benefits, in 2020.

Although the WEP was mainly aimed at those U.S.-resident, Social Security-eligible individuals whom the U.S. knew to be eligible also to receive additional pension income from, for example, a state or local government or other public sector job, it soon emerged that the Social Security pots of many U.S. expats were also deemed to be natural WEP targets.

This is because, as often happens when they leave the U.S. to work, expats’ years abroad often see them contributing to a non-U.S. government pension with Social Security-like benefits, instead of to the U.S. government's SS pot.

A survey carried out by the Democrats Abroad in 2019 suggested the possible scale of this problem, with one in six of those surveyed who were already receiving Social Security benefits saying that their benefits had been reduced by WEP, in some cases by as much as 40%

While many expatriate Americans not yet of pension age may still say that they are unaware of the WEP, or the effects it would have on their pension income – which in some cases, as we noted in our story last month, has meant hundreds of dollars less per monthly SS payment for them – until they sat down to apply to have the payments begin, the Social Security Administration says that this information is, in fact, readily available to them at any time. (See the detailed explanation provided to us by the SSA, below.)

In the meantime, below please find what the SSA told us, in some detail, about where and how expats can go about finding information about their Social Security accounts – including how much they're due to receive – so they can have all the information they need to best prepare for their retirement...

In order to inform people early about the potential effects of WEP-GPO (Windfall Elimination Provision – Government Pension Offset) on their benefits, the Social Security administration (SSA) publishes this information in a document it calls The Statement, which is available to anyone who has ever worked under the Social Security program, and thus, contributed to a personal SS pot.

The Statement  might be described as "every Social Security beneficiary's window into their account."  This is because it provides them with all the information they're considered likely to need about their reported earnings while working in a job covered by Social Security, as well as estimates of the tax contributions they and their employers paid, and estimates of personal benefits they and their families may apply for, based on those earnings.

According to the SSA, this Statement is personalized, so it includes what one Social Security spokesperson referred to as "variable language" that would be relevant, where applicable, to each individual's specific situation.

All Statements, the SSA says, have at least some WEP-GPO information, again depending on the individual in question's circumstances.

For people who have three or more years of "non-covered earnings" – earnings they received for which no Social Security contributions were made – the SSA provides a version of The Statement that has an expanded section on WEP-GPO. ("Both versions of The Statement include this information in the top right column of page two," the SSA told the AXFNJ.)

Annual statement by mail for those 60+

The Social Security Administration says it normally sends those who have contributed to the Social Security system in the past, and who are now aged 60 or older, but who don't have an online account nor yet receive any Social Security benefits, a statement in the mail each year, until they apply for benefits.

Mailed Statements are also available to anyone who requests one, by mail, using Form SSA-7004. This may be found by clicking here.

'You Have Earnings Not Covered By Social Security' 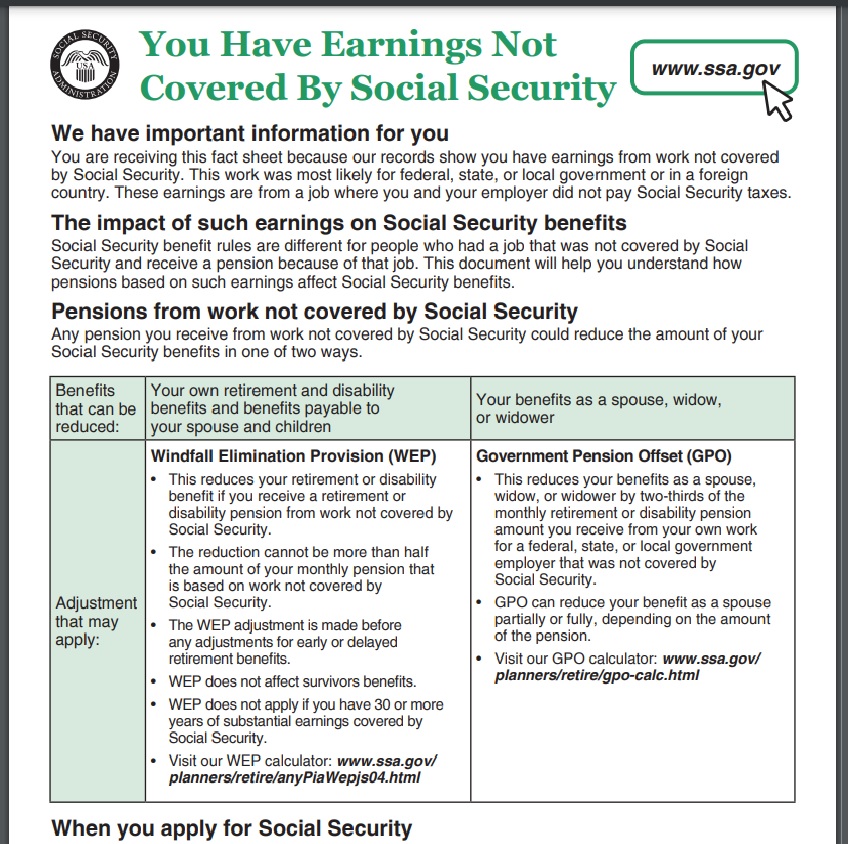 As for those individuals who have at least some history of non-covered earnings in their past, the Social Security Administration says it recommends looking at a "supplemental fact sheet" that offers two pages of WEP-GPO information thought to be of likely use to them.

The name of the fact sheet (as the screengrab to the left indicates) is You Have Earnings Not covered By Social Security, and it may be viewed in full and downloaded  by clicking here.

The SSA has a number of websites aimed at helping those who've been paying into the system to access information about their accounts. This, for example, is an example of The Statement as it would look to most those who don't have noncovered earnings on their records:

This is similar, but it's for those with noncovered earnings on record: 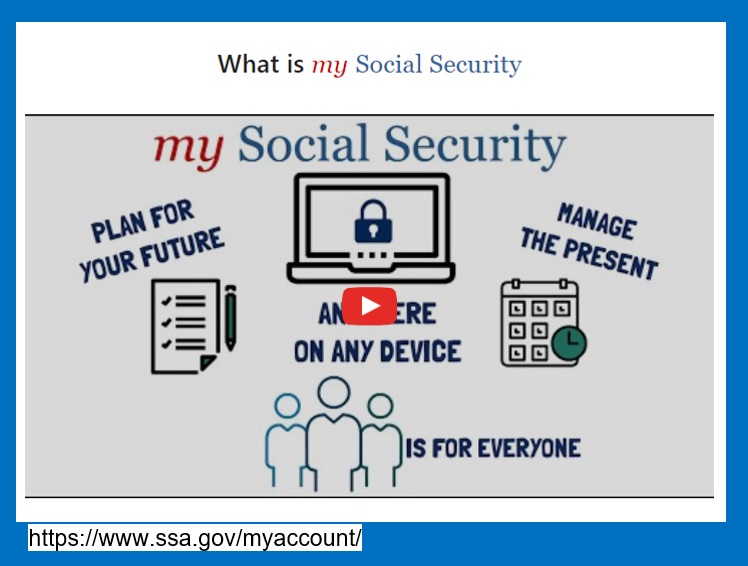 Such statements and fact sheets, the SSA says, are available online "to anyone using a "my Social Security" account.

To learn more about what a "my Social Security account is, and to view a video explaining this (pictured right), click here.

A general page for searching for answers about Social Security can be found by clicking here , while WEP-related information, including a WEP calculator, can be found on the Social Security Administration's website at: https://www.ssa.gov/benefits/retirement/planner/wep.html.

And when those with Social Security accounts reach the point when they're ready to begin receiving their payments – usually sometime around the age of 66 – and initiate the claims-filing process, certain new questions tend to arise, the SSA says.

At this point, applicants are asked if they are receiving another pension, or are expecting to receive one. And if they answer "yes" to this question, the SSA will ask them to provide the date when this pension is expected to begin being paid, or since when it has been.

If they already are in receipt of another pension, "documents [having to do with] that pension must be provided, and the WEP is applied," the SSA says.

One group of expats that get an "Expat Retirement Surprise" of a positive kind, meanwhile -- if they were AXFNJ readers, for example, and therefore knew to be bracing themselves to be hit by the WEP -- is that comprised of those who have 30 or more years of Social Security coverage. Anyone with 30 or more years of having paid into the Social Security system will not have to worry about WEP, the SSA says.

Last but not least, we have those who have a "Totalization" structure in place. Such individuals also will not have the WEP applied to their Social Security pot, according to the SSA.

Totalization is a term that applies to a complext type of agreement between the U.S. and the governments of certain other countries, which sets out a regime whereby the benefit rights of U.S. expats who divide their careers between the two countries are protected.

This is done "by permitting each country to count periods of social security coverage earned in the other country, as needed, to establish benefit entitlement," according to a Social Security Administration page on the topic.

"Periods of coverage are combined only for people who have a certain minimum amount of coverage, but not enough to meet the ordinary requirements for benefit entitlement."

Foreign workers are also covered by these agreements, although they tend to fare better than their American expat counterparts, the SSA page on Totalization notes, explaining: "If a foreign employer sends a worker to the United States to continue employment, the employer and the worker will often have to pay double social security taxes, unless that country and the United States have a totalization agreement in force.

"[But] this problem is particularly acute for U.S. workers, because the Federal Insurance Contributions Act (FICA) and the Self-Employment Contributions Act (SECA) mandate more extensive coverage for U.S. residents working abroad than do the comparable social insurance programs of most other countries.

"Although most countries tax their own nationals only for work performed in their own territory, the United States levies taxes on a broad range of economic activity performed by U.S. nationals and permanent residents outside [the] U.S.

"Further exacerbating this problem, the countries to which most U.S. workers are transferred tend to levy high payroll taxes to finance relatively generous social insurance programs. In some countries, the combined employee and employer share of those taxes can approach or exceed 50 percent of payroll."
______________________________________________________
The U.S. Social Security Administration was established by the Social Security Act of 1935, and administers the U.S. government's program of retirement, disability and survivor benefits. These are paid for by workers who pay Social Security taxes on their earnings. As reported last month, two bills aimed at reforming or repealing the Windfall Elimination Provision have been proposed by U.S. lawmakers in recent months. One of them, the so-called Social Security Fairness Act (H.R.82) – at last count had 305 co-sponsors (211 Democrats and 94 Republicans), and predictions had been, until recently, that it would make it to the House floor for a vote this fall. Neither bill mentioned the impact of the WEP on expatriate Americans.

Meanwhile, some observers have noted that concerns about the continued funding of Social Security, which is already said to be under threat, could result in neither bill being signed into law.