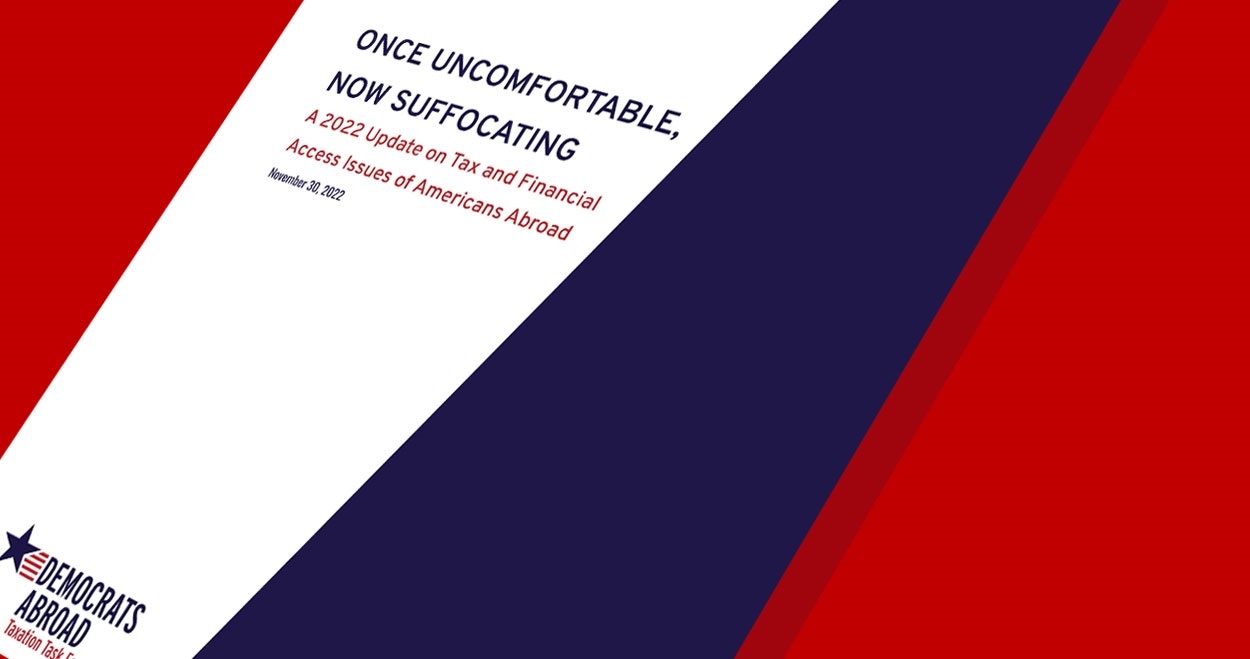 The Democrats Abroad's Taxation Task Force today is unveiling a damning report on what life is like, from a financial and tax perspective, for the millions of American citizens who live overseas.

Recent U.S. government efforts to catch and deter tax evaders, money launderers and the like have had little impact on those engaged in such illegal practices, the report notes, but have made the financial side of American expats' lives more complex and costly "with each modifcation to the tax code," while at the same time making it  increasingly difficult for them to open even a basic bank account for their routine household needs.

("Because U.S. law is enforced globally, foreign countries and their banking systems [now, since the introduction of such tax evasion-prevention laws as FATCA], react negatively toward U.S. citizens.")

The U.S. government's "punitive taxation of many forms of 'foreign' financial products," meanwhile, "renders Americans abroad unable to responsibly save and invest for their future, while American small-business owners abroad are unable to compete in local markets, due to being treated the same as multinational corporations under the [U.S.] tax code," the report points out.

Entitled Once Uncomfortable, Now Suffocating: A 2022 Update on Tax and Financial Access Issues of Americans Abroad, the 36-page report was almost two years in the making, and represents the work of more than 40 individuals, according to a DATTF spokesperson.

Many of its findings were derived from an online survey conducted earlier this year of almost 7,000 expats, which, the authors say, "was intended to be – and we believe, succeeded in being – non-partisan," owing to efforts aimed at reaching respondents outside of the Democratic Party network. (According to the report, 85% of those surveyed said they were Democrats Abroad members.)

The report, which the Dems Abroad Taxation Task Force is urging all expats (ie., not just Democrats) to share with their members of Congress (because they're "the ones with the power to change the tax laws") may be viewed and downloaded by clicking here.

The Democrats Abroad is the official organization for Democratic Party members who live overseas, and enjoys state-level recognition by the Democratic National Committee, where it has eight seats.

However, although it is invited to send a voting delegation to the party's national convention every four years, to participate in chosing the party's presidential candidate, as reported here in 2020, it typically struggles to get elected Democrats in Washington to formally take expat issues onboard.

For this reason, DATTF officials, like other expat advocates, such as the American Citizens Abroad (ACA), frequently urge Americans abroad to regularly and forcefully make their views on key issues affecting expats known to their elected representatives (as the DATTF's call for expats to share its report with their members of Congress, mentioned above, indicates).

As the ACA and other expat advocacy groups have been saying for years, many of the financial and tax problems American expats struggle with come down to the fact that the U.S. is one of the only countries in the world – and the only major nation – that taxes its citizens on the basis of their citizenship rather than residency. The tax problems for most American expats only really began to arise, though, after the Foreign Account Tax Compliance Act (FATCA) was signed into law in 2010, although it didn't come into force in 2014.

Most recently the focus of advocacy groups seems to be moving more and more in the direction of calling for the U.S. to move to join the rest of the world with a residence-based tax regime; in January of 2021, for example, a group of organizations and companies in the American expat space joined forces to launch what they called the Residence-Based Taxation Coalition, which had, and still has as its mission the persuading of U.S. lawmakers to move the U.S. to an RBT-based regime. The Democrats Abroad joined the group in October of 2021, and is still a member, according to the RBTC's website.

The new DATTF report, however, doesn't include much on the subject of CBT vrs. RBT until the last page. Here, under the heading "Conclusions" it notes that "a system that taxes based on residency and source – similar to that of nearly every other country in the world – can be a solution.

A bit later, it adds, "Democrats Abroad will continue working to advocate for Congress to legislate a change in the tax code to tax based on residency and source, but Americans abroad should also contact their Members of Congress and tell them about the tax and financial-access problems they experience abroad, and – if they’re not sympathetic – vote for [candidates] who will be."

To read some of the other key points covered in the Democrats Abroad's report, click "next" in the green box below...