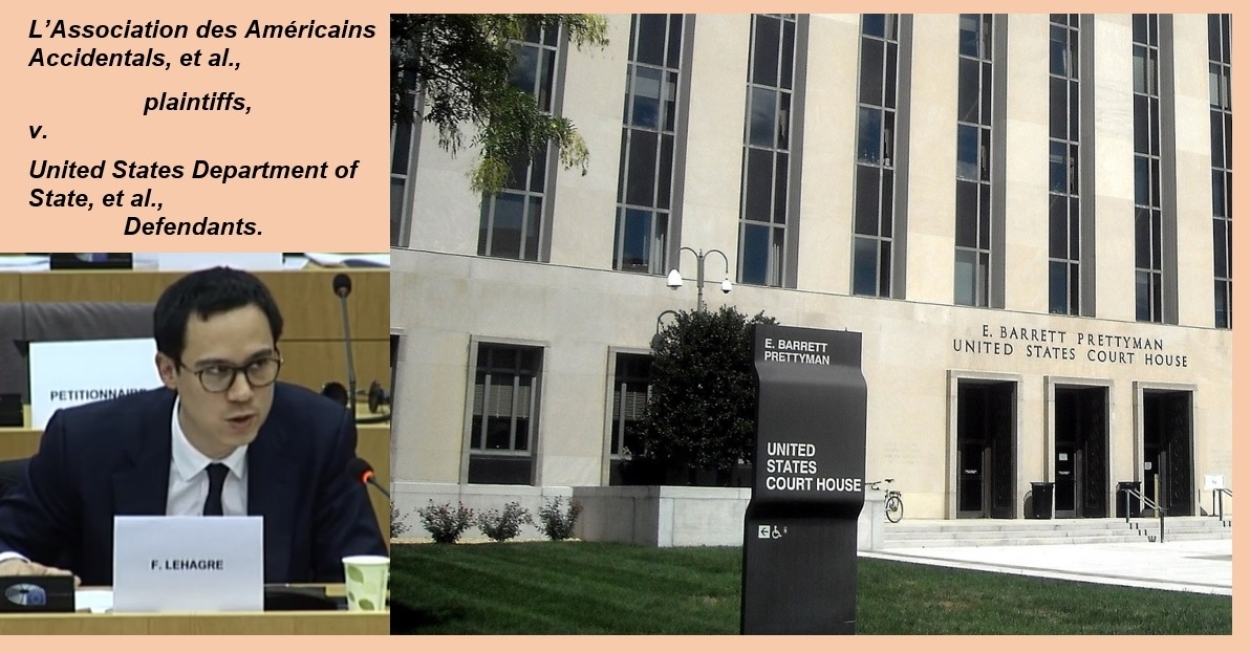 In one of the most potentially significant moves thus far by the U.S. government aimed at helping so-called "accidental Americans" and other expats who have been struggling since 2010 with their tax reporting obligations, the U.S. State Department has announced its "intent" to reduce the fee it charges those seeking to renounce their citizenships to US$450, from its current US$2,350.

The announcement of this proposed reduction in the much-criticized fee came on Friday, ahead of a hearing scheduled for this coming Monday, when a U.S. district court judge in Washington, DC had been scheduled to hear oral arguments in a long-running challenge over the U.S. government's citizenship renunciation regime, including its fee, by the Paris-based Association of Accidental Americans and 13 "accidental American" co-plaintiffs from around the world.

As this article went live (on Saturday, Jan.7), it wasn't known whether Monday's hearing would still go ahead. It's understood that the State Department has proposed that it not take place, and that all further proceedings "addressing [the] plaintiffs' procedural and substantive challenge to the current rule" be deferred, while the AAA says that it and its co-plaintiffs would rather proceed with Monday's hearing as scheduled.

Editor's note: On Monday, January 9, the court said the oral argument would proceed as scheduled, beginning at 2:30pm local time, at the E. Barrett Prettyman U.S. District Courthouse (pictured above), 333 Constitution Ave. N.W., in Washington, DC. The hearing is open to the public and to the press.

A two-page statement filed on Friday in the U.S. District Court for the District of Columbia, issued on behalf of the State Department by Justice Department officials Brian M. Boynton, Anthony J. Coppolino and Laurel H. Lum, announced that the "Defendants" in the case brought by the Accidental Americans "wish[ed] to alert the court of the Department of State's intent to...reduce the fee for processing" what are known as Certificates of Loss of Nationality of the United States, or CLNs, "from the current amount of US$2,350 to the prior amount of $450."

The statement, which can be seen on the website of the Association of Accidental Americans (l'Association des Américains Accidentals) by clicking here (and scrolling down), is accompanied by another document, "Exhibit A," which consists of a four-paragraph statement by U.S. Assistant Secretary for Consular Affairs Rena Bitter, in which she states the Bureau of Consular Affairs's intention "to pursue rulemaking to reduce the fee for processing CLN requests" by the amount mentioned above, which she points out would restore the rate first set on June 28, 2010.  (Prior to this, the U.S. didn't charge a fee for processing renunciation requests.)

The establishment of the US$450 fee in 2010 came less than four months after the U.S. tax evasion-prevention law known as FATCA (Foreign Account Tax Compliance Act) was signed into law by President Obama. FATCA is widely regarded – even by U.S. government officials – as having resulted in a major increase in the number of U.S. citizenship renunciations being processed every year.

(There were 6,705 renunciations in 2020, according to unofficial counts of renunciants' names posted on the Federal Register, compared with just 743 in 2009, although as the AXFNJ reported last year, some 507 of the names that were posted on the four quarterly 2020 Federal Register lists had appeared previously.)

Either way, 2020 remains the year when the largest number of renunciants' names were published, in part, those seeking to renounce and experts who help such individuals renounce say, due to the fact that many U.S. embassies and consulates around the world have been closed or offering reduced services since the Covid pandemic began, in early 2020.

Fabien Lehagre, the U.S.-born, Paris-based founder and president of the Association of Accidental Americans, noted that the State Department's announcement of its intent to reduce the renunciation fee by four-fifths was not just "extremely encouraging," but that it also could be seen as a "tacit acknowledg[ment]" that the legal challenge being brought by his organization and its fellow plaintiffs "has and will accomplish what it set out to do."

He added: "By lowering the fee to US$450, the U.S. government is showing that the right of voluntary expatriation is not to be trifled with, and deserves the utmost protection.

"Time will tell how the government will formulate and develop the new fee, and my organization intends to continue to campaign against any fee, or restriction on this sacred right of renunciation."

In a statement issued on Tues., Jan. 10  (and posted on LinkedIn), he added: "We continue to maintain that the US$450 fee infringes upon [our] constitutional rights, and that the government should and must reassess whether this amount is justified under the circumstances.

"During the oral arguments on Jan. 9, Judge Tanya Chutkan seriously considered [our] constitutional and statutory claims. Mr. Zell, our lawyer, argued that the right to voluntarily expatriate is a natural and fundamental right, subject to strict scrutiny.

"He explained that unless the government can explain how the fee is 'necessary' to further a 'compelling' government interest, the fee must be declared unconstitutional.

"[Judge Chutkan] was puzzled by the government's recent shift in policy, and asked the government's attorney how the fee can [have] been considered a compelling interest if, now, it suddenly changes the [fee] back [to what it was previously]."

Lehagre's organization and its co-plaintiffs first launched their challenge to the way the U.S. handles citizenship renunciation requests in 2020. They claim that the current US$2,350 fee "is the highest by far charged by any nation for the voluntary renunciation of citizenship", adding that "many countries charge nothing for the right to expatriate, which was [also] the case in the United States for over 200 years."

The legal action is one of several that the AAA has brought, individually or alongside other plaintiffs as in this case, since it was founded in 2017 by Lehagre, a California-born "accidental" whose French father brought him back to France at the age of 18 months. It now has around 1,400 members.

The Netherlands Association of Accidental Americans (NLAAA) has also been campaigning on behalf of accidental Americans living in that country. Today, a spokesperson for that organization, Jet Barendregt, said the news "from our French fellow-suffers" was "positive," and added: "How nice it would be if the cost of relinquishing one's U.S. citizenship were indeed reduced from US$2,350 to US$450."

She noted that the NLAAA was awaiting "official confirmation" that the fee would, in fact, be reduced (a comment expressed by other observers on Saturday, upon hearing the news that such a reduction was the State Department's "intent").

When the government raised the basic renunciation fee in 2015 to its current rate, from US$450, the argument for doing so was that it was needed to cover the costs involved in processing such applications, which normally involve an in-person meeting at a U.S. consulate or embassy.

For this reason, London-based EY Frank Hirth partner Michael Lewis noted, reducing the fee "might have some unintended consequences," in the form of still longer delays than have already become the norm, in the wake of the Covid pandemic that saw U.S. embassies and consulates around the world stop processing expatriation requests altogether for, in some cases, more than two years, according to sources familiar with the situation.

"When the rules were modified so that U.S. embassies/consulates were able to keep for themselves the renunciation fee for the cases they processed, we saw a dramatic drop in waiting times, as more resources were directed at this," Lewis said.

"So while lower costs for clients is always welcome, this might have some unintended consequences, in the form of a huge increase in waiting times, which still have yet to recover from the backlog due to Covid."

In addition to still being able to still receive US$450 from every passport and Green Card handed in, however, the government would still, it is thought, continue to receive what is unofficially called an "exit tax" that the U.S. levies on what it deems to be wealthy expats, who tick certain boxes that the IRS details in a document on its website, the most basic of which is having a net worth of US$2 million or more on the date of their "expatriation or termination of residency." (Expatriates who fall into the category of having to pay this tax are called "covered expatriates.")

Friday's State Department announcement of an intent to reduce the renunciation fee to US$450 did not refer to this extra tax on wealthier individuals, which is seen as being intended to discourage rich expats from leaving the U.S. tax system without making a significant contribution on the way out.

Who are 'accidental Americans'

Accidental Americans is a relatively new term that is used to refer to persons deemed to be U.S. citizens because they happened to have been born in the U.S., but otherwise lived the rest of their lives elsewhere, as citizens of other countries. Some "accidentals" were born abroad but to at least one American parent, and are therefore considered to be American, even though they have may never have set foot in the States.

The term began to be used in the wake of the 2010 introduction of FATCA, which began to come into force in 2014. Long before most American expats and even many financial services industry people had heard of it, expats began hearing from their banks and other financial businesses that they would need to take their accounts elsewhere, as these businesses weren't interested in taking on the added burden and risks of complying with the law's requirements.

At issue, as many American expat critics of FATCA are quick to point out, is the fact that the U.S.'s citizenship-based tax regime – famously unique in the world, apart from Eritrea  –  obliges anyone born in the U.S. to file tax returns every year, and potentially to pay U.S. taxes and even penalties for failing to file such documents as Foreign Bank Account Reports, even if they have never lived in the U.S., or earned money there.

FATCA obliges non-U.S. banks and financial services businesses to provide the U.S. with key information about any "U.S. persons" whom they provide accounts to, including these individuals' "U.S. Tax Identification Number" (TIN), which is normally a U.S. Social Security number.

As this and other publications have been reporting for years, many "accidental Americans" are reluctant to enter into the U.S. tax system, as they're obliged to do in order to obtain such TINs, yet without them, they are even less able find non-U.S. banks willing to have them as clients, especially in certain countries.

Organizations like Lehagre's have been challenging FATCA and the way the U.S. comes after accidental Americans in particular for years, but they have struggled to obtain sufficient support in their home countries to bring about the relief they have been seeking.

Enabling such individuals, and other expats who have no plans to return to the U.S., to renounce their citizenships, therefore, could make a significant difference, depending on how the existing renunciation regime is ultimately rewritten.

Related podcast:  In December of 2020, just after the Association of Accidental Americans and its co-plantiffs launched their court case against the way the U.S. handles citizenship renunciation requests, the AXFNJ's podcast interviewer, Toronto lawyer John Richardson, discussed the case with Zell. That podcast may be viewed by clicking here.

Editor's note: This is a breaking news story, and may be updated as further developments come our way.