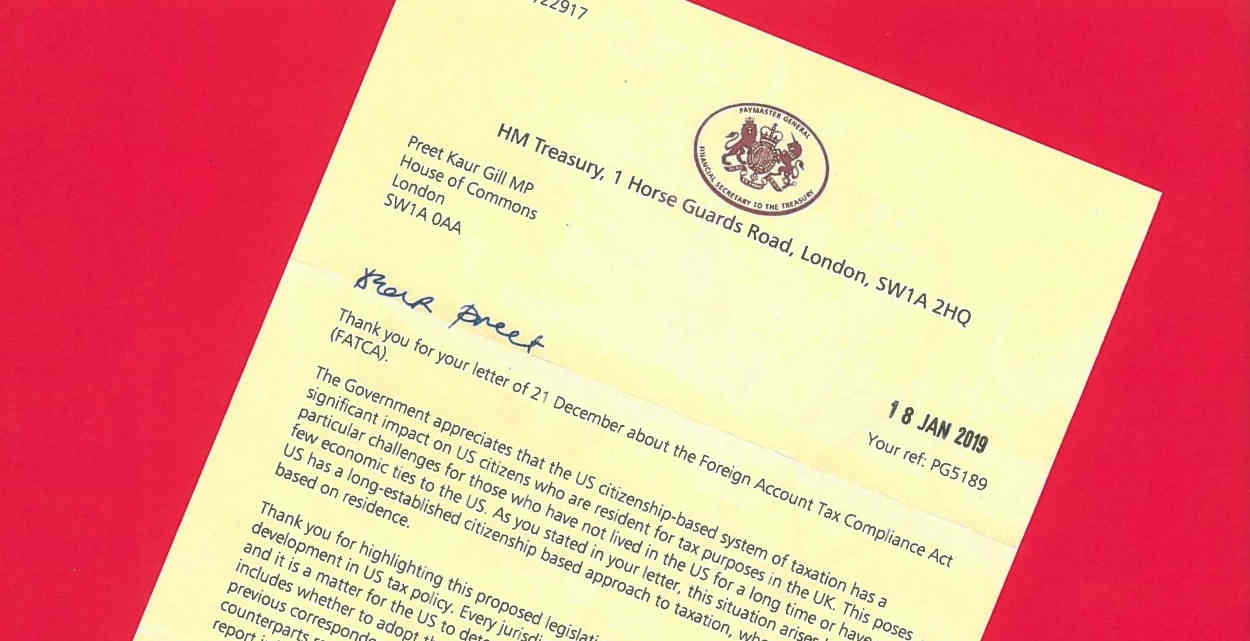 For the second time in two months, it has been revealed, a Labour Party member of Britain's Parliament received a formulaic and non-committal response to specific questions she had asked the U.K. government on behalf of some of its citizens – who also happen to be regarded by the U.S. as Americans, and therefore face considerable hardship as a result of the way the U.S. taxes such "accidental Americans."

Accidental Americans and spokespersons for organizations representing their interests expressed dismay, and even some surprise, at the response to Gill's latest letter, with some saying it seemed to accept the U.S. government's claim on these accidentals as "U.S. citizens," when in fact they were British citizens, typically didn't carry or even ever have an American passport, and had lived most of their lives in the U.K. What's more, they said, "accidentals" themselves don't normally regard themselves as American, which is one of the reasons for their seeking the help of lawmakers like Gill.

As reported,  Preet Kaur Gill, an MP from the greater Birmingham area, said in January that she planned to continue asking questions on behalf of the U.K.'s "accidentals", after having been alerted to the situation they're in by a constituent, but having made little headway convincing fellow U.K. lawmakers of the issues.

This constituent of hers had been born in the U.S., but had been moved to the U.K. with his parents just 10 weeks after he was born, she said. Yet despite this, like thousands of other accidentals in the UK and elsewhere, he had been hit with unexpected and significant tax obligations from the U.S., as a result of his automatic citizenship, Gill said.

Gill's initial Dec 10 letter to UK Chancellor Philip Hammond had been responded to by Conservative MP Mel Stride on Dec 18, and didn’t address her concerns so much as clarify the way such "accidental Americans" were “created” by the signing into law of the Foreign Account Tax Compliance Act in 2010, which enabled the U.S. tax authorities to discover all those with "foreign" bank accounts who had been born in the U.S., since the law required banks to tell the authorities.

Vowing to continue speaking out on behalf of accidental Americans living in Britain, Gill followed up with another letter on Dec 28, which Stride evidently responded to (pictured above), on 18 Jan, although news of this response has only just come to light.

In his response, Stride thanked Gill for again "taking the trouble to make us aware of these concerns," but noted that it was "a matter for the U.S. to determine how U.S. tax obligations are calculated."

Thus, he said, it remained up to the U.S. to decide whether to adopt the Tax Fairness for Americans Abroad Act, a piece of legislation proposed at the end of last year by Republican Sen George Holding, which, as reported, contains an option for American citizens who are living abroad to elect to be taxed on the basis of their residency, rather than their citizenship.

Stride didn't address the question many accidental Americans, who have had British passports or the passports of other countries from the time they were infants, typically ask, which is why the country these individuals have grown up thinking they were citizens of, and carry the passports of and pay taxes to, seem willing to hand over to the U.S. tax authorities.

Whether Gill intends to continue to pursue the matter with the Chancellor or Stride isn't known, as no one from her office was available for comment.

'British citizens are being persecuted by extra-territorial U.S.'

Accidental Americans who read Stride's response to Gill said that he didn't seem to grasp that those "accidentals" living in Britain were actually and fully British citizens, and regarded themselves as such – and that, as they saw it, it was only down to a technicality that the U.S. alone recognized that enabled the U.S. to pursue long-departed individuals like them for bank account details, tax returns and tax.

A number of British politicians are known to have been born abroad, and one, Boris Johnson – who, like Stride is a member of the Conservative Party – renounced his American citizenship in 2016, after objecting publicly to having to pay capital gains tax on his half of the profit from the sale of his and his wife's London home.

Greg Hands, a Conservative member of Parliament for Chelsea and Fulham, is a still dual U.S. and UK citizen, having grown up in the UK after being born in New York.

"Above all, British citizens are being persecuted by the extraterritoriality of American legislation, and it is not normal for the British government not to defend its citizens," said Fabien Lehagre, president of the Paris-based Accidental Americans Association, which he, an "accidental" himself, founded in 2015, and which has helped to mobilise other accidental Americans not only in France but across the European Union, of whom there are estimated to be more than 300,000.

Lehagre also questioned Stride's understanding of the Tax Fairness for Americans Abroad Act, which he said was not intended to address the accidental Americans' issues, but those of American expats generally.

"The British government should join forces with the governments of France, Belgium and the Netherlands, and adopt a common approach with the United States, with respect to the way it treats their citizens," Lehagre added.

"The Dutch finance minister announced last week before the Tweede Kamer [Dutch house of representatives] that he would go to Washington personally to discuss the subject of the accidental Americans, with a view to finding a solution. Perhaps Mel Stride should go with him."

"She would be able to explain to him some detail the actions the European Parliament is taking to defend the rights of accidental Americans," Lehagre said.

As reported, the European Parliament on July 5 last year unanimously approved a resolution supporting the idea that Americans who have spent most if not all of their lives living outside of the U.S., and who have been longtime citizens of EU countries, deserved EU support in their efforts to be allowed to walk away from their U.S. citizenships, and related tax obligations, more easily than they can now. The vote, a resounding 470 votes to 43, with 26 abstentions, came in response to efforts by Lehagre and other accidentals to rally the politicians in the countries in which they now live.

Among other things that resolution called on EU member states as well as the European Commission to re-open negotiations with the U.S. over FATCA.

No one knows exactly how many Americans currently live in Europe, or even the U.K., let alone how many are dual U.S./U.K. citizens, which most "accidentals" living in Britain would be likely to be.

Last year the UK’s Office for National Statistics estimated the number of “American citizens” (as opposed to “US-born” individuals) resident in the UK in the year ending in June 2017 as being “in the range of 121,000 to 157,000."

Some experts say the actual number is higher, however, as it would include students and others who don't appear in most official counts.

It is generally thought that most Americans resident in the U.K. live in or near London and the Southeast. In Gill's constituency of Edgbaston, a major local enterprise is the University of Birmingham, which among other things is known for having a particularly successful and well-established American football program, led by the university's Birmingham Lions team.

Renouncing one's American citizenship is currently an expensive and time-consuming process, and many accidentals are concerned that if they go ahead with it, the U.S. may at some later date prevent their return to the U.S., where many have relatives.

Below, some of the more than 150 Accidental Americans Association demonstrated last November in front of a Statue of Liberty replica on the Île aux Cygnes (Isle of Swans) in Paris, to call the attention of U.S. president Trump to their plight, during his visit to the city.