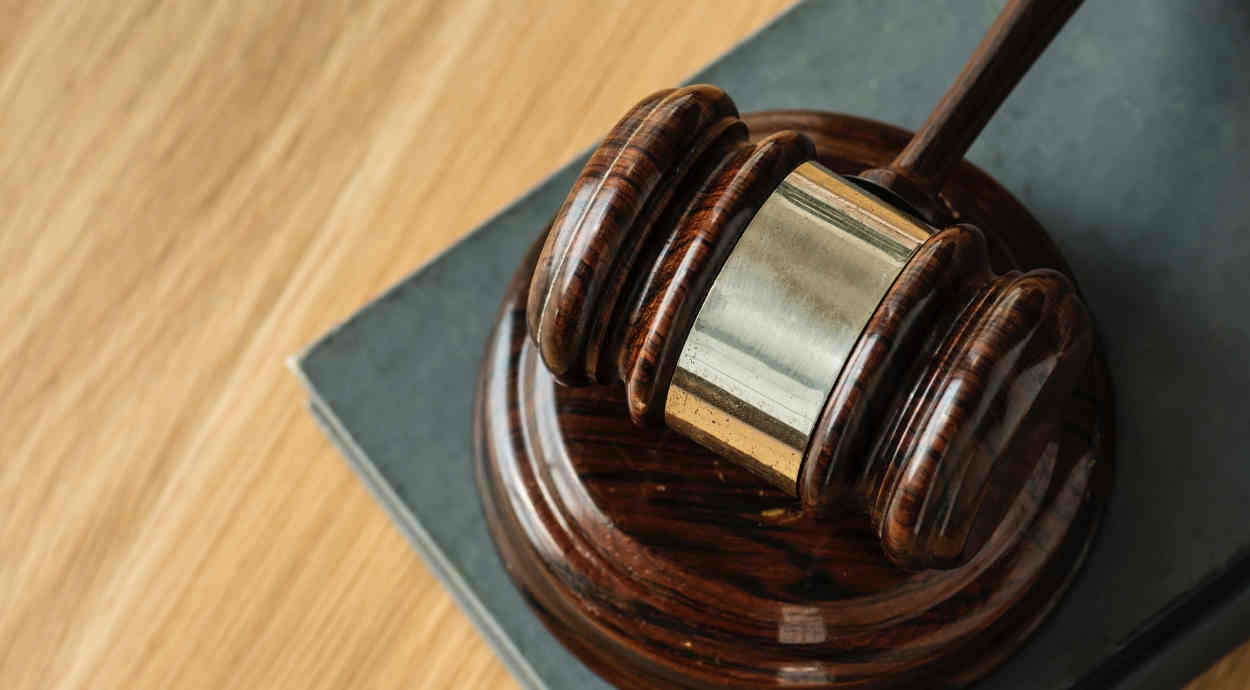 Last month's trial over the constitutionality of the Canadian government's enforcement of America’s FATCA legislation was, of course, hugely important for American expats around the world, all of whom are waiting, or perhaps should be, to hear how the court ultimately rules. For some, though, it was also a chance to study the gavel habits of a country other than the United States, and then sit back and wait for the gavel imagery that almost inevitably follows such events.

This is because, as is normally the case in courtrooms located in Commonwealth countries, or former British colonies, gavels have never been used, even though photographs of them are often used to illustrate news media images of whatever proceedings have taken place in them.

(For the record, no gavels were spotted in that courtroom in Vancouver, although disappointingly, we are also unaware of any news coverage of the hearings that featured a photograph of a gavel.)  And an @igavel contributor in December confirmed that like the UK, Canada is a gavel-free zone.

"Canadian judges don't use gavels & we avoid using them in order to symbolize the differences between our justice system & that of the U.S.," the @igavel contributor noted, and provided a link to a Provincial Court of British Columbia document explaining this fact.

Explains the UK judiciary's own website, www.judiciary.uk: "Although they’re often seen in cartoons and TV programs and mentioned in almost everything else involving judges, the one place you won’t see a gavel is an English or Welsh courtroom – they are not used there, and have never been used in the criminal courts."

And as a result, although it is still less well known, perhaps, than train-spotting and plane-spotting (and probably likely to remain so), "gavel-spotting" has, with the help of Twitter, become one of those games that evidently gives enormous pleasure to those to play it, mainly in the U.K., in part because they do it under the oblivious noses of friends, colleagues and relatives. 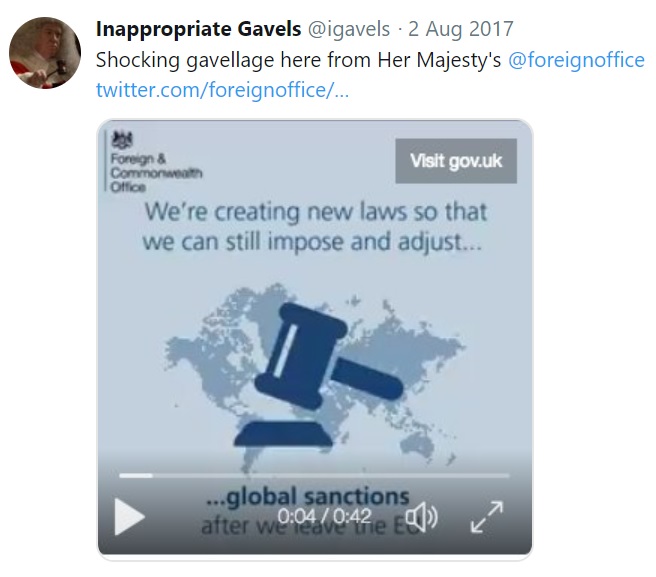 The game consists of spotting images of gavels in the media to illustrate court cases and similar situations in which no gavels ever would have appeared, and posting them on a Twitter site that exists just for such, well, offenses: @igavels (for "inappropriate gavels").

Some seem to revel in the @igavels game as a chance to call-out American "cultural imperialism" as it is happening in the UK, the way someone might call attention to people who refer to chips as "french fries" or lifts as "elevators."  But most seem to take delight at simply spotting and outing a glaring mistake that few others see, particularly if they can build a clever play on words into their tweet while they're at it.

The @igavel game has also spawned its own language and humor – there are references to "fellow gavellers," for example, puns involving "banging," "banging on", "knock it on the head" and the like, and the phrase, "no gavels, please, we're British."

The individual behind the site is disinclined to discuss it, we have discovered, but it is thought to be a journalist named Callum May, who, it was reported in 2015, followed on from another journalist named Marcel Berlins, "who used to bang on about [gavels] in his Guardian column nearly a decade ago."

The @igavels site was apparently launched in 2014, and currently has 6,076 followers. Its activities have occasionally been written up by media outlets, such as The Independent in 2016 and The Guardian in 2015, but the inappropriate gavel offense continues to be committed by everyone from trade publications like Citywire and The Grocer, and major UK publications like London's Times newspaper, to the BBC, big-budget costume dramas on television, and even government departments.

Above, for example, is an @igavels posting from 2017, which shows the UK's own Foreign & Commonwealth Office committing a gavel error (or "shocking gavellage," as the contributor puts it).

The photograph of a white-wigged judge banging a gavel in the upper left-hand corner, meanwhile, is the @igavel trademark image, which comes from a 2015 BBC period drama, The Scandalous Lady W.

Where gavels are okay in the UK, it seems, is in its auction houses, a point often noted by the gavellers who gleefully share photos of their finds on @igavels.

Meanwhile, an @igavel poster earlier this month noted that a U.S. lawyer she knew, "a litigator," was "a little baffled [by] the gavel annoyance, as he said that most courts in the U.S. don't use them either," suggesting that even in the U.S., "[television] exaggerates their use."

In the interests of furthering journalistic accuracy, therefore, the American Expat Financial News Journal would like to announce to its readers today that as FATCA, the Transition Tax and other major issues facing Americans living abroad find their way into the world's courts, in addition to reporting on the substance of the proceedings, we would welcome your contributions to @igavels, and will share them ourselves, if you give us a heads-up whenever you tweet.

More in this category: « Criticism for second understated response to U.K. lawmaker’s championing of 'accidentals' plight Return to UK for first-ever finance exec convicted under FATCA »