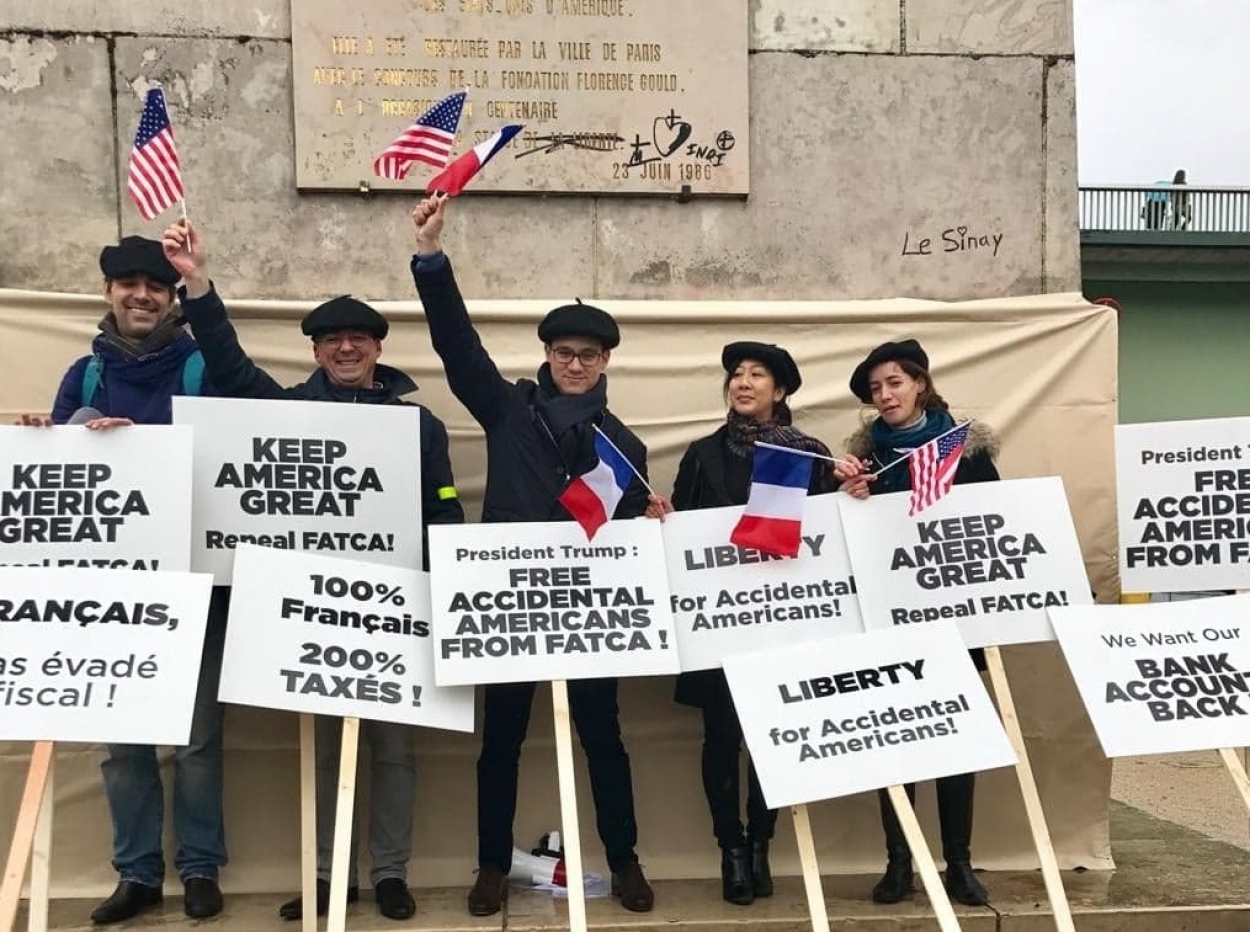 Above, Some of the more than 150 members of the Association of Accidental Americans who demonstrated on the Île aux Cygnes in Paris last November

The Paris-based Accidental Americans Association filed a legal complaint yesterday against a number of French banks, alleging that the banks are actively discriminating against French citizens who also happen to have American citizenship, in violation of European banking laws.

The complaint, filed with the Paris Public Prosecutor "against several online banks," represents the latest development in an ongoing battle over the 2010 U.S. law known as the Foreign Account Tax Compliance Act (FATCA), which has been taking place in the European banking sector – which  has itself been attempting to convince the U.S. government to make it easier for its members to comply with the unpopular, Obama-era tax avoidance rules.

L’Association des Américains Accidentels, or AAA, as the organization is known in France, has retained a law firm, Dupond-Moretti & Vey, to represent its case in the matter.

According to a press statement issued by the law firm, the plaintiffs say the banks are refusing to allow them to open bank accounts because of their American citizenship. The statement notes that the banks named in the AAA’s complaint include Boursorama and ING Direct. A copy of the complaint wasn't immediately available.

At issue is a requirement that Europe’s banks must provide banking services to European nationals – yet to do so, if these nationals also happen to be American citizens, can put the banks at risk of falling foul of FATCA’s enforcement rules, for which the penalties are severe.

(Non-compliant banks face a 30% withholding tax on all of their financial flows coming in to them from the U.S.)

As reported here earlier this month, the head of the Brussels-based European Banking Federation, which represents some 3,500 banks across Europe, formally warned U.S. Treasury officials in a letter dated Feb. 22 that American expats may continue to struggle to get and keep bank accounts if something isn't done to address the problems his organization's members are facing in their efforts to implement FATCA.

Key EBF officials – including its chief executive, Wim Mijs – also visited Washington earlier this month to discuss the matter with U.S. Treasury officials. It is not known how those meetings went, or what if any agreements may have been made.

In his letter in February, Mijs cited the difficulty FATCA presents to non-U.S. banks because of the law's insistence that non-U.S. banks provide the U.S. with the so-called U.S. Tax Information Number (TIN) of all of their clients who have American citizenship. Few European “accidental Americans” – who are considered to be American because they were born there, typically years ago, or have at least one American parent, but who have grown up and reside in Europe, and are legal citizens of one of the EU’s 28 member states – have such numbers, the AAA says.

EU banks in race against clock 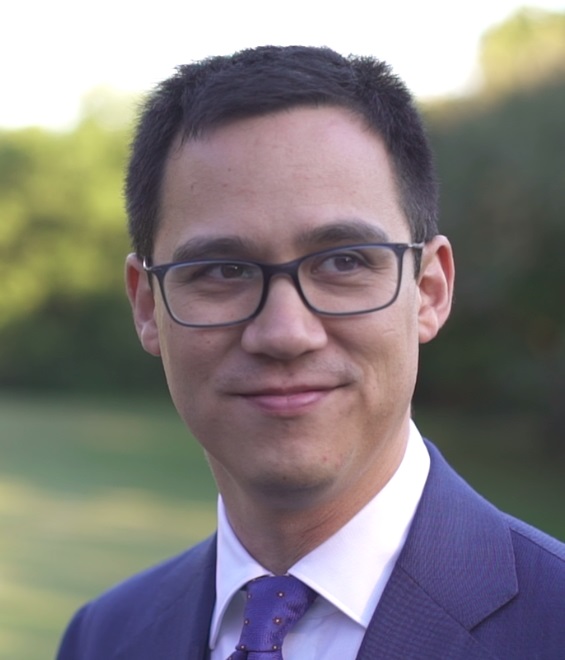 Fabien Lehagre, pictured left, president and founder of the AAA, says he is not without sympathy for the banks, as he says the FATCA regulations place these institutions in a no-win situation, particularly after the end of this year. That’s because a moratorium that currently exempts European banks from having to report their American clients’ TINs is due to expire on 31 December, he notes.

“But even if a solution were found for the banks, the problems for accidental Americans would persist,” Lehagre adds.

“This is why we continue to press the U.S. Congress to switch to residence-based taxation, like the rest of the world practices; repeal FATCA; and permit those ‘accidental Americans’ who wish to renounce their American citizenship to do so, through a simple, cost-free procedure.”

Of yesterday’s legal action, Lehagre said it was “part of the AAA’s global strategy to maintain pressure on the public authorities and banking institutions.”

“Our next important deadline will be the judgment of our appeal by the Council of State," he added.

Lehagre is referring here to another case, currently pending in France's administrative Supreme Court, which argues that FATCA is unconstitutional under French law, owing to the fact that the French constitution requires treaties to be reciprocal, and that FATCA violates French and European data protection laws.

Efforts to challenge the constitutionality of FATCA in the U.S. Canada  and even Israel have not been successful, although some of those behind such lawsuits have yet to admit defeat.

In the U.S., the Supreme Court last April declined to hear a legal challenge to FATCA that had been brought by a group of American expatriates and led by Kentucky Senator Rand Paul, on grounds that the claimants lacked the standing to sue, and that the harms they claimed to have suffered as a result of the law had not, in fact, been directly caused by it. Similarly, the Israeli Supreme Court in 2018 formally rejected a petition that had sought to challenge the constitutionality of the Israeli legislation that enabled Israeli financial institutions to participate in FATCA.

In addition to the problems FATCA creates for accidental Americans and other Americans resident outside of the U.S., some countries are increasingly questioning why the legislation isn't fully reciprocal, that is, why they don't receive information from the U.S. on accounts in the U.S. held by their taxpayers, including those who reside in their home countries. The U.S. is one of the few countries that haven't signed up to the Common Reporting Standard, an automatic financial information exchange regime that has recently been brought into existance by the Organisation for Economic Cooperation and Development, which is widely seen as a global version of FATCA.

Meanwhile, in February, the European Data Protection Board announced that it would "pay due attention to the call made to it [by the European Parliament] to review the existing data protection safeguards under the legislation authorizing the transfer of personal data to the U.S. IRS for the purposes of the US Foreign Account Tax Compliance Act."

It added that the EDBP had "initiated work on the preparation of guidelines … which should be adopted by the EDPB before the end of 2019” and which it said would be “a useful tool...for the evaluation of intergovernmental agreements signed between [EU] member states and the U.S. government on FATCA, to ensure their compliance with the GDPR.”

The problems Americans living outside of the U.S. have in obtaining bank accounts as well as such things as loans, mortgages and other financial products have existed almost from the day FATCA was signed into law by President Obama.

This is why the American Citizens Abroad, a Washington, D.C.-based organization which represents American expatriates around the world, in 2016 joined forces with the U.S. State Department Federal Credit Union to provide a range of banking options for expats who can’t otherwise obtain them in the countries where they live.

As reported here last July, one of the biggest boosts accidental Americans around the world have enjoyed since FATCA was signed into law came last July, when the European Parliament unanimously approved a resolution supporting the EU "accidentals" in their quest to be allowed to cast off their American citizenship (and thus their taxation by the U.S.) more easily and cheaply than is currently possible under U.S. law.

Among other things the resolution, approved by a  resounding 470 votes to 43, with 26 abstentions, called on EU member states as well as the European Commission to re-open negotiations with the U.S. over FATCA.

Many of those close to the cause attribute the movement's recent success to Lehagre, an accidental American himself, who founded the AAA two years ago, and who has been a tireless campaigner for the cause. The AAA now has more than 770 members, a visible presence on Facebook and Twitter, and chapters in a number of other EU countries, including the UK.

One of Lehagre's most attention-getting efforts thus far involved inviting President Trump to meet with him and his fellow AAA members when the president was due to visit France last November. Although Trump didn't respond to his invitation, Lehagre and 150 of his fellow 'accidentals' held a gathering anyway, beneath a replica of the Statue of Liberty on the Île aux Cygnes (Isle of Swans) in Paris (see photo above, and below), which was widely covered by the world's media.

Altogether the AAA estimates there are more than 10,000 'accidentals' in France, and as many as 300,000 across Europe.