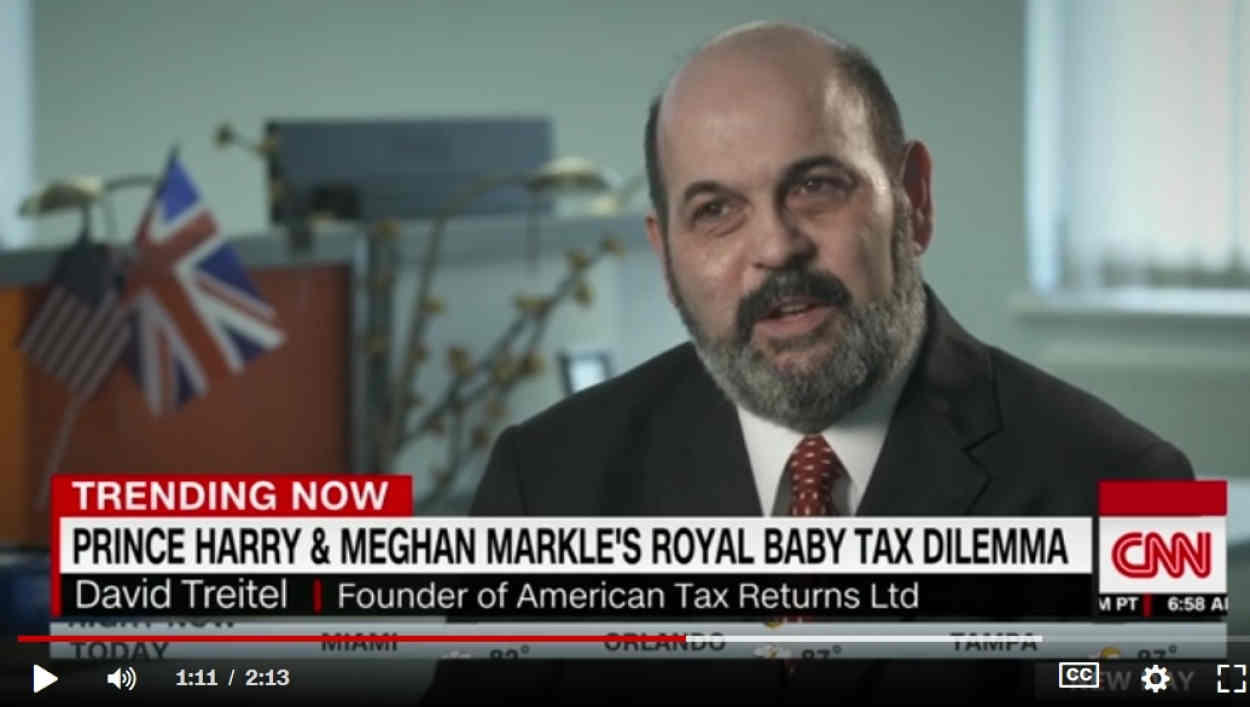 With Meghan Markle and Prince Harry's baby said to be due any day now, the stories about the "royal baby" and its American tax issues have become almost impossible to avoid, even in the tabloid press.

The latest  major media organization to weigh in on the subject is the U.S.-based, global television network CNN, which features excerpts from an interview with London-based U.S. tax expert David Treitel, pictured above, on the subject of the soon-to-be-born infant and its tax obligations.

The CNN coverage, published today, includes both video and online written versions of the same general story, summarized in the headline, "The US tax dilemma facing Meghan, Harry and the Royal Baby."

Both versions of the story note that both Meghan, now officially known as the Duchess of Sussex, and her baby, "who will be seventh in line to the British throne," will be liable to pay U.S. taxes, which could "potentially open up the notoriously private royal accounts to the Internal Revenue Service."

"The baby is being born to a United States citizen and that baby, little boy or girl, who comes along in the next few weeks, will automatically be a citizen of the United States simply because her mother is," Treitel is quoted as telling CNN.

"There is no other precedent of anybody else in the Royal Family who's been American. So nobody else has ever faced this circumstance before."

Treitel is quoted as describing how the Queen and her tax advisers might go about weighing up the potential tax consequences of lending Meghan such royal treasures as tiaras, or letting her soon-to-be-born infant have the use of a silver rattle that might have been used by Queen Victoria as a baby: "how much is that worth, what’s the value of it, how much has to be reported to the States? It’s a tough question. It’s not easy.”

What's more, the report continues, not only will Meghan have to declare all gifts she receives to the IRS, "but if she considers selling any of them, she would be taxed on any rise in their value – and with her name attached to them, the jump in value is likely to be great."

As a US citizen, regardless of where she lives, Meghan will be obliged to file a US tax return and to report any foreign accounts, assets over $200,000 and gifts valued more than $15,797 "regardless of whether it is actually in your possession," according to the IRS, the CNN article notes. And the only way for her to end this reporting requirement "would be to renounce her U.S. citizenship once she becomes a British citizen," the article and video report point out.

"However, even if she does so, the couple's baby will still be liable for US taxes until the age of 18.

"That means that throughout the child's life, he or she will also have their assets and income exposed to US taxes – including any "unearned income" over $2,100 – until they are 18 years old, and have the opportunity to renounce their citizenship, if they choose to do so."

The bottom line, the CNN reports conclude, is that "the minefield of the U.S. tax system means Harry and Meghan's baby will likely create a lot of paperwork for the Royal Family's accountants."

To see the video version of the CNN report, click here.

The CNN report was picked up within hours by the UK's Express newspaper, which extracted key quotes from Treitel and came up with its own interpretation of the matter, headlined "Meghan Markle puts Queen in AWKWARD situation over passport - shock reason REVEALED." To read this, click here.

More in this category: « Brown Advisory opens Singapore outpost as it looks to expand across Asia Boeing China VP to speak at AmCham China Women's Summit this week »