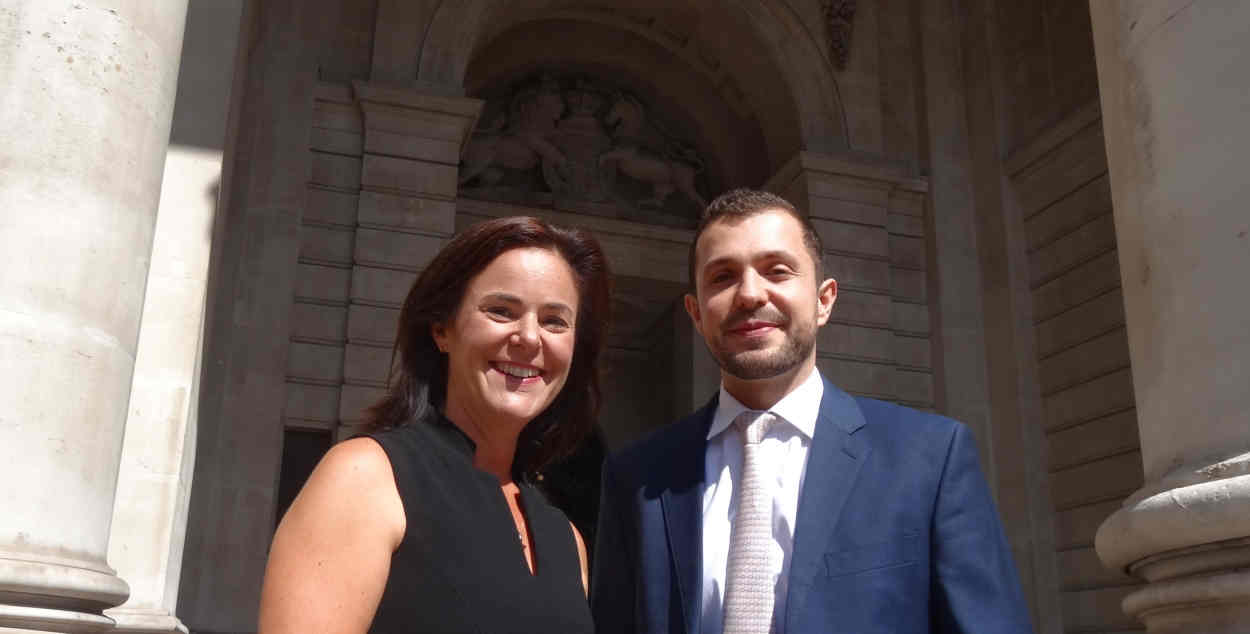 Seven Investment Management, the London-based asset management firm known to many as the operational base of the famously red-braced and outspoken Justin Urquhart Stewart, has begun offering an investment product designed specifically for American expatriates living in the U.K.

The product is actually a choice of model portfolios, in either a U.S. dollar or sterling version, which is structured to be fully compliant for U.S. investors living in the UK.

The product range was originally planned and drafted by 7IM chief executive and co-founder Tom Sheridan, who recently retired from the firm, after 17 years at its helm. Sheridan is himself American and, after years of living in the UK, was – as he put it in an interview a few weeks before announcing his departure – therefore only too familiar with “the plight of Americans living outside the United States, for whom doing very basic things in the financial services world, for yourself and your family, is sometimes hard.”

Oversight of the new product range and its delivery to clients now falls to 7IM business development manager Jordan Gillies and 7IM private client manager Olivia West (pictured above), who helped Sheridan in the development and launch of the US Investor Service, as it's called.

Neither is American, but both are immersed in the intricacies of American expatriate financial needs, having worked closely with Sheridan for a number of years, a company spokesperson said.

‘More than just comply’ with regs

Thieir familiarity with the minutiae of American expat investment issues may also be due in part to the fact that the new 7IM US Investor Service has been designed to do more than just comply with the U.S. Internal Revenue Service’s very specific requirements governing the structure of such products.

For a start, reflecting Sheridan’s heightened awareness of the complex tax reporting issues faced by Americans abroad, the product has not just been designed to ensure that it won’t be considered a “PFIC” (passive foreign investment company) and subject to a potentially high rate of tax. In addition, it has been designed to its investors with a complete set of income and capital gains tax reports, ready for them to deliver to Uncle Sam alongside their U.K. tax returns, as required every year, according to 7IM executives. 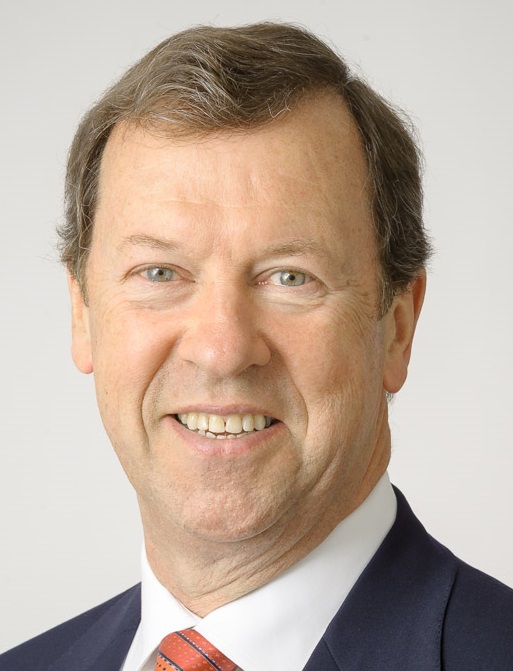 This offering, Sheridan, pictured left,  explained in his interview ahead of the launch, would be “difficult if not impossible” to find in any other comparable investment product currently on the market, which he admits reflects his personal input in developing it.

“I did it because I understand the problems, because I file my own tax returns every year,” he said.

“I got to the point where I said, ‘You know what? Before I die, I’m gonna fix that!’

USP: Fully bespoke tax
info for both IRS and HMRC

Seven Investment Management intends to market its new US Investor Service range – which will be available in a choice of Moderately Cautious, Balanced and Moderately Adventurous strategies, consisting of around 12 to 15 investments per strategy – to UK-based American tax specialists as well as to individuals and their wealth managers.

This is because they believe tax experts, possibly more than anyone, will appreciate the 7IM US Investor Service's value.

“Very few [other investment product providers] in the UK at the moment can provide income and capital gains reports on their clients’ holdings that are compliant with both U.S. and UK tax law,” Sheridan said.

“Here in the UK, most UK firms and platforms will provide their clients with the UK income and capital gains tax reports – the so-called ‘composite tax voucher’ and CGT – on their investments, so they can use them when they file their UK tax returns. That’s quite normal.

“But to get the same UK institution to also provide a client with IRS-compliant income and capital gains reports is, at the moment, almost impossible.

“For a start, the two systems have different tax years; the U.S. being on a calendar year, the UK tax year beginning in April.

“Difference No. 2, which is even worse, is that to be IRS compliant, all of your transactions during the year have to be captured in dollar equivalents – and that’s the dollar as it is on the day, not at some other point in time.

“Then you’ve got the fact that in the United States, they have the concept of short-term capital gains and long-term capital gains; this doesn’t exist here. This means, for example, that if you hold a security for less than 12 months, it is taxed as income; longer than that, it is seen as a capital gain.

“Then there’s the fact that the accounting methodology in the U.S. is FIFO [first in first out], while in the UK, it’s LIFO [last in first out]. Where this starts to matter is when, say, you’ve purchased the same security on multiple occasions, and then ultimately sell it, you have to say whether you sold the first one you bought, or the last one, as the tax rules are opposite in the U.S. and the UK.”

What 7IM has done, Sheridan said, is to develop the technology “to capture all these differences as they happen, and produce both sets of income and capital gains tax reports for the investor.”

For now, at least, the reports are only available to U.S. persons resident in the UK, but if there’s demand, 7IM could expand the offering to other jurisdictions, according to Sheridan.

Also important to note, he adds, is that the product may be used not only by individual “U.S. persons” resident in the UK, but also by but for mixed-nationality couples who invest – and file their taxes – jointly; U.K. trusts that have American trustees; and charities that have a legal presence in both the U.S. and U.K.

Number of
Americans in UK

Estimates as to how many Americans are living in the UK at present vary. The British Office for National Statistics said in 2018 that it estimated there were between 120,000 and 156,000, but couldn't give any details as to who these Americans were, which states they were from, or under what circumstances they were resident in the UK. Some financial industry advisers believe this figure is low, and say it may be closer to 250,000 or more. Globally the American expat population is said to range somewhere between a little more than 5 million and 9 million.

Seven Investment Management was founded in 2002 by Sheridan and Urquhart Stewart, who say they did so because, as investors themselves, they “couldn’t find an investment management service we’d be happy to use.”

The company they founded was owned for a time by two insurance companies, Zurich and Aegon, before they sold out to Caledonia plc, an investment trust owned by the Cayzer family, and today looks after more than £13.4bn of clients’ and Sheridan and Urquhart Stewart family members’ investments.

More information, including product fact sheets, is available from 7IM by contacting Jordan Gillies or Olivia West at 7IM, either via the website or by emailing This email address is being protected from spambots. You need JavaScript enabled to view it..

The company’s offices are located in London’s financial district, near Liverpool Street Station. 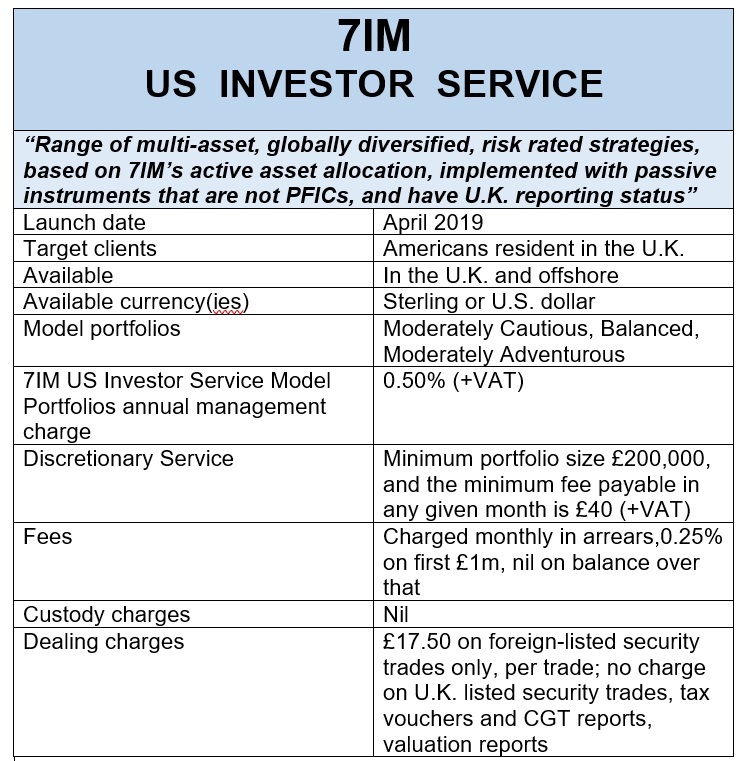