More than one in five U.S. expatriates surveyed by Greenback Expat Tax Services, a major provider of U.S. expat-focused tax services, say they are "seriously considering renouncing their citizenship."

And almost four in 10 of those saying they are considering renouncing cited the tax burdens they face as a result of being an expat, the Greenback survey results reveal.

As reported, the survey was carried out earlier this year, with Greenback spokespeople saying they were hoping to receive more responses this year than they did in 2018, when more than 3,800 individuals participated. In the end, more than 3,100 U.S. expats sharing their thoughts on the U.S. tax system generally, tax reform, citizenship-based taxation, Foreign Bank Account Reports, citizenship renunciation and related topics.

In a summary of this year's findings, Greenback said that U.S. expats generally believe their "taxation requirements should be simplified or lifted altogether, that they are subject to unfair treatment, and that their interests are ignored by the government [that] their taxes continue to support."

While 49% of the survey's respondents gave the repeal of the current citizenship-based tax regime as the "No. 1 issue the U.S. government can do to help Americans living abroad," 74% said they were not aware of certain potential changes that could be brought in by the proposed Tax Fairness for Americans Abroad Act of 2018, which, as reported, would exempt foreign income earned by US expats from taxation.

The Greenback Expat Tax Services findings came less than two months after the U.S. government published its quarterly listing of the names of those who most recently gave up their U.S. citizenship, which has become a closely-watched listing in recent years as the number of those renouncing is seen as a measure of expatriate unhappiness. According to this document, some 1,018 U.S. citizens formally renounced their citizenship between Jan. 1 and March 31. Last year some 3,983 renounced, down from 5,133 the previous year, and 5,411 in 2016, which thus far remains the peak renunciation year.

Among the other key findings of this year's report:

In an executive summary of this year's findings, Greenback Expat Tax Services noted that its data, for the fourth year in a row, suggested that "the vast majority of U.S. expats do not feel that their interests are fairly represented by the U.S. government."

It added: "Many voiced their desire to have a political leader represent them as a collective group, similar to other countries with representatives for those who live outside the country.

"Within the survey, expats voiced that they feel they are being punished for living outside the U.S., do not believe that their tax money benefits them, and find the effort and money that it takes to file each year to be a burden.

"The trend of expat dissatisfaction with U.S. government representation continues, and though many expats remain politically engaged, they also feel that they are subject to unfair treatment and that their interests are ignored by the government their taxes continue to support.

"Government leaders should be weighing the interests of all Americans, regardless of where they’re currently living and working, not just because it’s the right thing to do, but because the expat voice is strong enough to sway an election."

To read more about the Greenback Expat Tax survey on the company's website – from which the below diagram is taken – click here. 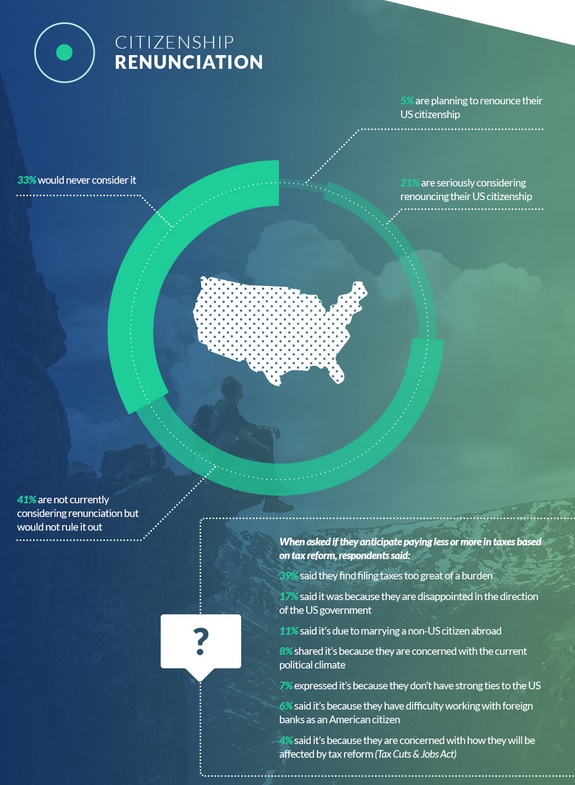