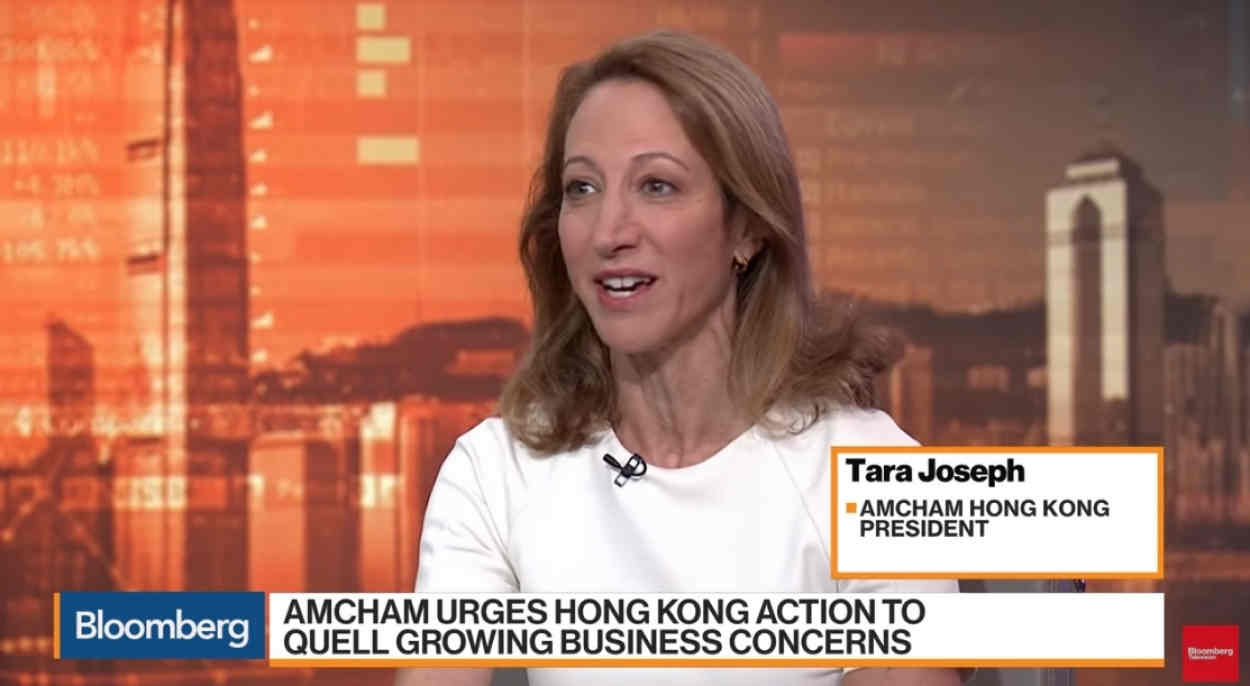 The American Chamber of Commerce in Hong Kong has called on Hong Kong's government to "take immediate and tangible actions to address the root causes of recent demonstrations and restore confidence in the city’s status as Asia’s preeminent international business and financial center," citing a recent poll of its members.

The organization's call for measures to restore business confidence, in a statement issued on Monday  which was accompanied by interviews of and personal appearances by AmCham president Tara Joseph, was widely covered in local and international media, including Bloomberg television  (from which the photo, above, was taken), the Financial Times and the South China Morning Post.

The poll of AmCham members cited in the statement was carried out between July 23 and July 25.

The demonstrations have now been taking place for some eight weeks, as they morphed from a protest over the extradition bill – which would have enabled extraditions of suspects in custody in Hong Kong to mainland China – into a more general pro-democracy movement.

The SCMP has described the American Chamber of Commerce in Hong Kong as the city's "most influential American commerce group" and the city's largest international business chamber, with some 1,400 members. Around 12% of them participated in the survey.

Among its key findings is that the AmCham membership would like to see the government convene an "internationally credible independent inquiry into all aspects of  [the] recent unrest over the [now-suspended] bill," as well as to "[remove] any room for continued public doubt by formally and completely withdrawing" the extradition legislation.

In the AmCham Hong Kong statement, Joseph is quoted as saying that her organization "urges the government to stem any further damage and show clear leadership in meeting the expectations of Hong Kong people, and in restoring the city’s international reputation for effective governance under the ‘one country, two systems’ framework.”

She added: “A clear majority of our membership surveyed over the past week said the government needs to address the underlying causes of the protests, and not simply to paper over the cracks of social instability with a short-term law-and-order fix."

'Primary beneficiary of Hong Kong's
decline will be Singapore'

Among the AmCham Hong Kong's survey results many Hong Kong business executives will find most concerning was a finding that Singapore is seen as the likely prime beneficiary of their city's recent unrest.

Businesses are "already reporting serious consequences from the disruption caused by weeks of mass demonstrations, political paralysis and outbreaks of violence and destructive acts in a city that [previously had enjoyed] an enviable reputation as one of the world’s safest places," AmCham Hong Kong noted, in a summary of its survey findings.

"These range from an immediate hit to revenue caused by disruption to supply chains and consumption, to longer term doubts over cancelled events and shelved investments.

"Respondents also reported a deepening perception within their companies and among overseas customers that Hong Kong has become less safe and a riskier place in which to conduct business.

"While members made clear Hong Kong’s many unique competitive advantages remain largely intact, they voiced concern that a failure to address the instability and worsening perceptions toward the city now may lead to irreparable damage over the long term."

'No ambition to become a political organization'

AmCham stressed in its comments that it "is not, and has no ambition to become, a political organization."

However, it added, "the feedback from members underscores the crucial intersection between good governance, political inclusion and social stability that provide the essential ingredients for economic prosperity and sustainable business performance."