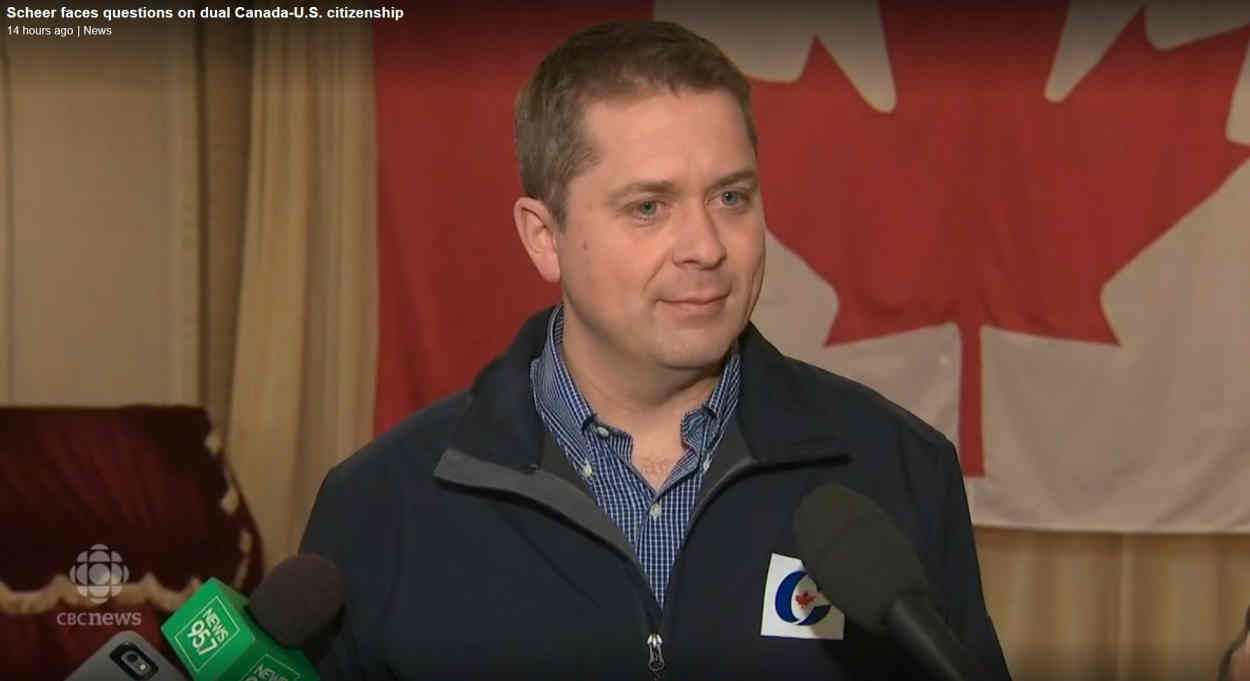 Andrew Scheer, the leader of Canada's Conservative Party, acknowledged on Thursday that he has dual Canadian-U.S. citizenship, but added that he is in the process of renouncing the American one.

Speaking at a campaign event in Halifax, Scheer, who is seen as Prime Minister Justin Trudeau's main challenger, told reporters that although he'd been born in Canada, he had acquired his U.S. citizenship from his father, who himself had been born in the United States.

Scheer's announcement has received widespread media coverage in Canada as well as abroad, including by the CBC News group, from which the above photograph of Scheer, pictured during a press conference at which he announced his dual citizenship, was taken.

According to to The New York Times, Scheer didn't disclose his dual citizenship until The Globe and Mail, a Toronto newspaper, revealed it yesterday.

In being forced to address his dual citizenship in the full glare of publicity, Scheer joins a growing list of non-U.S. politicians that have recently been caught out by the fact of having an American citizenship. As reported here yesterday, for example, a dual American-Kenyan citizen is fighting to be allowed to keep her American passport while still being permitted to represent Kenya as its ambassador in South Korea.

During the summer, Somalia president Mohamed Abdullahi Mohamed (also known as Mohamed Abdullahi Farmajo) officially announced that he had voluntarily renounced his U.S. citizenship, as part of what was seen at the time in Somalia as an effort on his part to ensure that his loyalty to the country couldn't be questioned by his political opponents.

Perhaps the best-known recent political renunciant is British prime minister Boris Johnson, who had been born in New York but who spent most of the rest of his life in the UK, and renounced his U.S. citizenship in 2016.

Dual citizens 'not barred from office'

Media organizations noted that dual citizens aren't barred from holding political office in Canada, which also doesn't impose any restrictions on holding other citizenships, as some countries do. But the fact that Scheer never mentioned his American citizenship before is being seen by some as something of an oversight, although he has maintained that "no one ever asked me before" and for this reason, he never felt that he needed to mention it.

"Like millions of Canadians, one of my parents [was] born in another country,” he said.

"I met with representatives from the [U.S.] embassy in August and announced I was renouncing my citizenship, and submitted the paperwork to start that process."

Among those political opponents who have remained critical was Zita Astravas, a spokeswoman for Canada's Liberal Party, media sources noted.

"Over a million Canadians hold dual citizenship – it's part of what makes Canada great," Astravas was quoted as saying in a statement, according to The New York Times.

"But none have hidden that fact when running to be prime minister."

According to Canadian and U.S. media reports, the dual citizenships of other Canadian politicians have come up as an issue in the past, including some who held dual Canadian-French citizenship. Elizabeth May, leader of Canada's Green Party, had been born in Connecticut but had her U.S. citizenship "revoked in 1978 when she became a Canadian citizen, per the rules at the time," according to CTVNew.ca – which said she added, in a statement, that she would have renounced her American citizenship anyway.

Scheer said he had filed American tax returns, as American expats are required to do, even if they have other citizenships and reside outside the U.S., The New York Times reported. It added that his campaign team had said separately that Scheer had "never voted in an American election and had let his American passport lapse long ago."

More in this category: « European Parliament said to plan hearing next month into FATCA and its 'extra-territorial impact' Would-be litigant 'Jenny' closing in on funds for FATCA challenge in UK »