A new French television advertisement featuring the American film star Brad Pitt, which shows him appearing to make use of a Boursorama Banque card while going about the streets of New York City, has drawn criticism from the Paris-based Association of Accidental Americans. In real life, the AAA points out, the bank wouldn't accept Pitt as a customer because of the fact that he's a U.S. citizen.

In fact, l’Association des Américains Accidentels (Accidental Americans Association) pointed out on Wednesday, Boursorama was one of a number of online banks it named in a lawsuit earlier this year, which claimed that French-U.S. dual nationals were being discriminated against because of their American citizenship.

Also named in their lawsuit, filed with the Paris prosecutor on March 27 on behalf of some 306 so-called "accidental Americans," according to a Bloomberg report, were such other online banking entities as a French unit of ING Groep NV.

It was yet another development in the ongoing saga of individuals who for all practical purposes are French, but who, typically because they happened to have been born in the U.S. before their parents returned to France or other countries, are struggling to keep bank accounts because of the 2010 U.S. law known as the Foreign Account Tax Compliance Act. FATCA of course, regards such dual citizens as Americans, and in addition to expecting them to file U.S. tax returns every year, also obliges their banks to report to the U.S. authorities on their account details, including such U.S. tax information as Social Security numbers – numbers that many of them typically don't have, and, thinking of themselves as French, don't want to have to get.

The advertisement in question may be seen on YouTube by clicking here,

On the surface of it, having a major Hollywood star like Pitt in one of its ads would seem to be something of a coup for Boursorama, a 24-year-old online-only banking division of Société Générale, a major French financial services group.

That's because Boursorama targets a budget-conscious client who is willing to manage without banking branches and other trappings of traditional banks in exchange for low charges, while Pitt is at a career high at the moment, as a result of his leading roles in two just-released films, Quentin Tarantino's Once Upon a Time in Hollywood and James Gray's Ad Astra.

But Fabien Lehagre, president of l’Association des Américains Accidentels, said it was "ironic" of Boursorama "to have an American actor promoting [itself]" when the bank "doesn't accept Americans, or those with American indicia, as clients."

Lehagre added, in comments in an article on the cbanque.com website – a French online consumer banking information website currently in the process of re-branding as MoneyVox.fr – that Boursorama had spent "more than 6 million euros to afford this advertising with Brad Pitt, even as [it] justifies its refusal to open accounts to people of American nationality because of the costs of managing such clients would be too high."

The AAA is considering whether to seek a legal means of stopping the ad from being shown, he added.

Officials from Boursorama Banque didn't immediately respond to requests by the American Expat Financial News Journal for comment on Wednesday, while queries sent to Société Générale were said to have been forwarded to Boursorama. Representatives from the agency behind the ad and Pitt's spokespeople also didn't immediately comment.

However, a French banking industry source, who is familiar with the matter but who asked to remain anonymous, said the bank is understood to have regarded Pitt's citizenship as irrelevant with respect to the message the advertisement was intended to convey, since the message was that its existing clients were its best salesmen, and that even a Hollywood star as big as Brad Pitt wasn't needed to recommend its products, because its own satisfied clients were all it needed.

For the advertisement, the source added, the bank had sought to feature a star so big that they were "known everywhere," and that Pitt was seen to fit that bill.

The source noted that many non-U.S. online banks in particular, which make a feature of the fact that they are so cost-effective for budget-conscious clients, struggle to accommodate Americans, even if they want to, because the costs involved in complying with FATCA are so prohibitive. To have French-American citizens as clients, the source said, would mean a non-U.S. online bank would have to raise its prices, and this in turn would mean these dual citizens' accounts would therefore effectively end up being subsidized by their other customers.

The Brad Pitt Boursorama Banque advertisement, which was unveiled last Sunday according to French media reports, was reported by the Paris media to be part of a campaign by the bank to increase its account-holders to 3 million, from the current number of around 2 million.

An article on the LeParisien.fr news website on Monday quoted the head and founder of Buzzman, the advertising agency responsible for the ad, as saying that the agency had initially considered George Clooney and Leonardo Di Caprio in addition to Pitt.

The ad was shot, the article added, in New York in July. At one point early on in the advertisement, the Bleecker Street subway station can clearly be seen.

The one-minute, 20-second Boursorama ad opens with a stubble-chinned Pitt, casually dressed and wearing a flat cap of a kind that's currently fashionable, walking through the Lower East Side of Manhattan, where he's greeted by locals who clearly know him well.

As he walks, Pitt appears to be addressing the camera, and talking about what appears to be his Boursorama payment device, although nothing he says is audible. The English comments of those around him can be heard, though, saying things like "morning, Brad, what's with the camera?" These are sub-titled in French.

Pitt pays for his usual order from a street vendor – addressing the camera inaudibly the whole time, now and then showing his phone and what appears to be a bank card to the camera – and then takes out some money from an ATM before hailing a taxi and getting in.

The camera then pans to a woman who is explaining something on her phone to a friend.

As this is taking place, three sentences in French appear superimposed on the action, which set out the Boursorama message.

"We don't need Brad Pitt to recommend Boursorama Bank," the first one says.

"Because no one does it better than our customers.

"Nearly half of our new customers come on the advice of a loved one."

(Below is that final line, accompanying the image of the woman explaining something to her friend.) 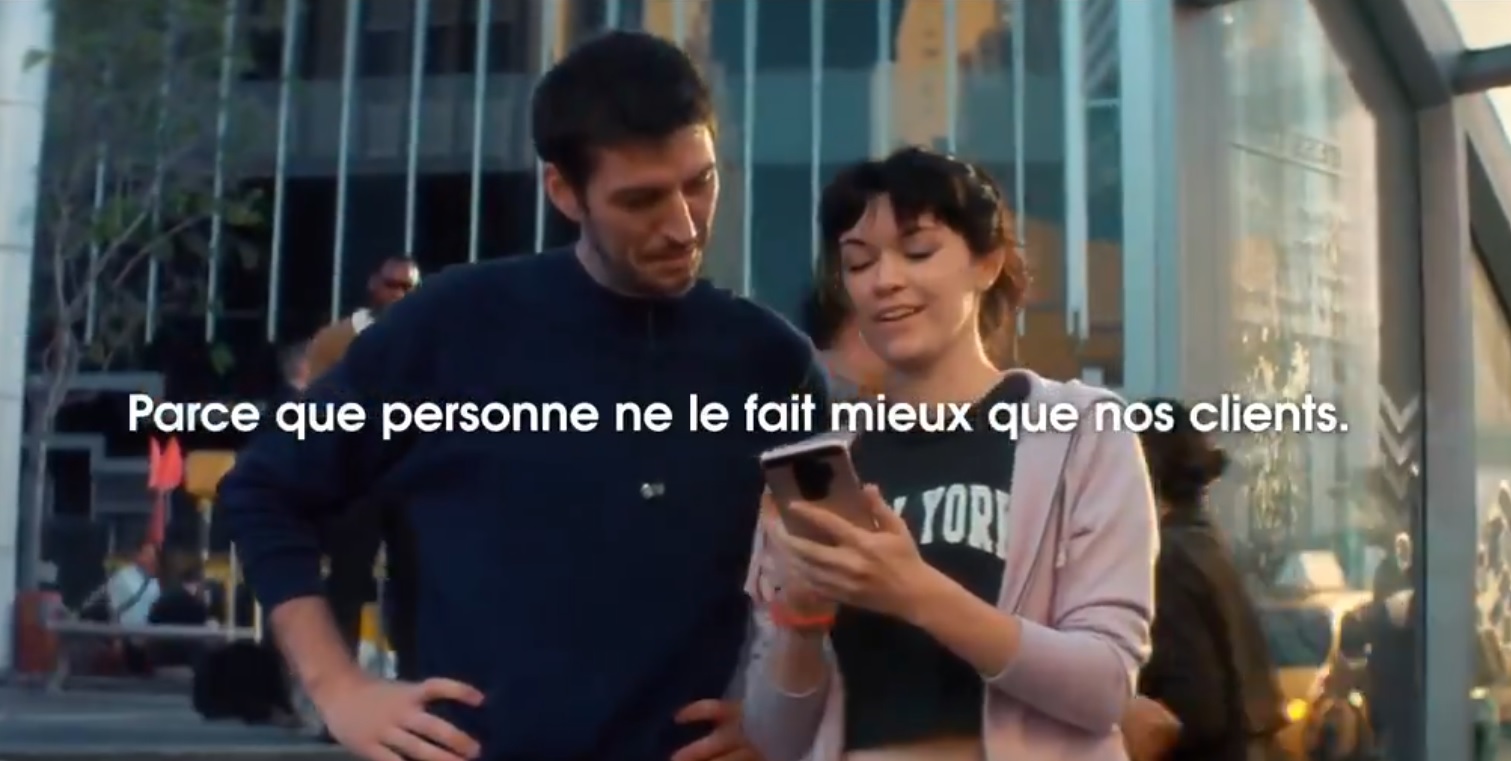 More in this category: « Would-be litigant 'Jenny' closing in on funds for FATCA challenge in UK 'Jenny' hits her £50,000 crowd-funding goal a day early »