(Updated Nov. 10, 2019, to include information about registering to attend.)  The European Parliament's Petitions Committee has published details of its hearing scheduled for Tuesday,  Nov.12, on the "extraterritorial impact on EU citizens" of America's Foreign Account Tax Compliance Act (FATCA).

The hearing will take place between 10:15 and 12:30 in room 1A002 of the Paul-Henri Spaak Building of the European Parliament's office complex in Brussels (pictured above).

In a statement on the European Parliament's website, the committee, known to EU parliamentarians as "PETI" (short for "petitions"), explains that the purpose of the hearing will be "to facilitate an exchange of views between the various stakeholders [affected by FATCA] and listen to the issues faced by EU citizens affected by FATCA".

It said the hearing would be split into two parts, comprising an initial panel discussing financial services aspects of FATCA, and the process by which tax information is exchanged with the U.S., and a second panel that would look at the "indirect effects of FATCA on EU citizens", including the potential conflicts between FATCA and Europe's data protection rules.

Dolors Montserrat, a Spanish MEP who heads up the European Parliament's Petitions Committee, which is holding the hearing, will chair the event.

Among those scheduled to attend the hearing will be someone who is identified only as "Mr J.R. (French)", whose petition to the European Parliament in 2016 on the subject of FATCA led to a series of actions that next week's hearing will be the latest example of.

Preet Kaur Gill, a British Labour party MP who has repeatedly written to British government officials with questions about FATCA and its effect on British citizens, on behalf of at least one of her constituents, is down as a possible participant in the hearing.

To see the PETI statement as well as a number of documents relating to the hearing – including the original 2016 petition – click here. 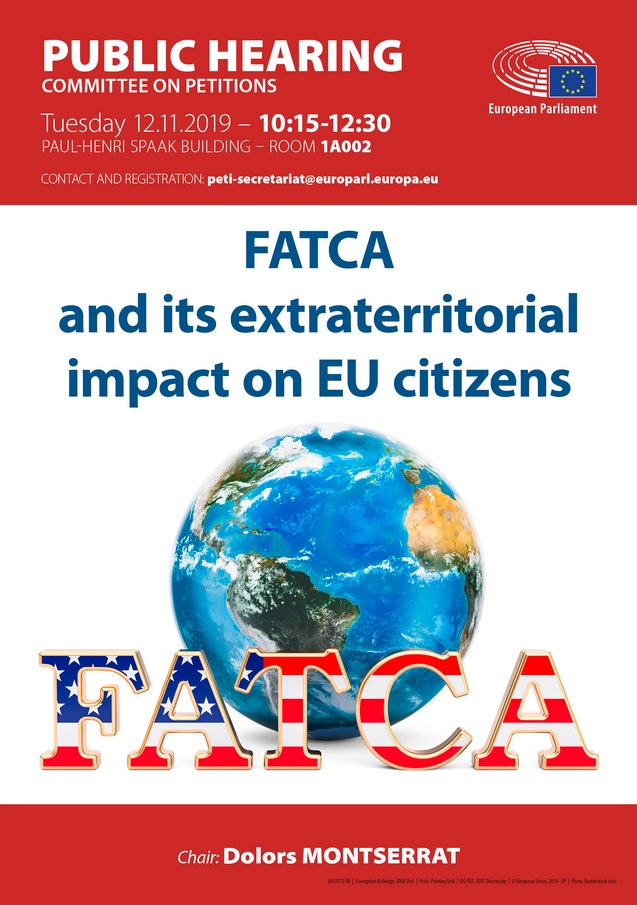 As this publication and others have been reporting, the problems thousands of European citizens are having as a result of FATCA because of mostly historical links they have to the United States have been attracting growing attention over the last few years, with the result that growing numbers of European lawmakers have been calling for the European Parliament to act.

Last year, the European Parliament unanimously approved a resolution supporting the cause of Europe's “accidental Americans” who had been campaigning to engage European government officials to back their request to be allowed to cast off their American citizenship (and thus their taxation by the U.S.) more easily and cheaply than is currently possible under U.S. law, by 470 votes to 43, with 26 abstentions.

Among other things the resolution called on EU member states as well as the European Commission to re-open negotiations with the U.S. over FATCA.

The petition filed in 2016 by "Mr J.R. (French)" is said to have prompted that resolution.

What if any further steps the European Parliament might take with respect to FATCA as a result of Tuesday's hearing is not known. Such hearings are designed to connect European citizens and the groups that represent them with EU lawmakers in a way that solutions may be found, a PETI spokesperson said on Thursday.

"The [Petitions Committee] as a whole serves as a bridge between EU citizens and EU institutions, and works to brings [these citizens'] citizens to the attention of their elected representatives," the spokesperson added.

Information on the last page of the FATCA hearing event programme, which may be seen by clicking here, indicates that the deadline for requesting a pass necessary to attend expired at noon on Nov. 4. It is not known whether the PETI Secretariat is prepared to make an exception and allow those still interested in attending to sign up, but a PETI spokesperson said anyone who was interested could send an email explaining their interest in attending to This email address is being protected from spambots. You need JavaScript enabled to view it.. Journalists with the necessary credentials will also be free to attend.

Those who are unable to attend may view the hearing online, at this address: https://www.europarl.europa.eu/ep-live/en/committees/video?event=20191112-0900-COMMITTEE-PETI

More in this category: « Charles Schwab telling clients in UK, Europe their accounts must move or be transferred by year’s end Treasury in move to scale back Obama-era regs aimed at corporate tax avoidance via offshore »