When news emerged earlier this month that Charles Schwab Corp., the major, NYSE-listed U.S. broker, bank and asset custodian, had been contacting clients in Europe to tell them that they needed to take certain actions with respect to their accounts before the end of the year, many American expat investors wondered whether other firms would soon be following Schwab’s lead...

It is, after all, a well-worn path, the one that U.S. financial product and services providers take when they prepare to make changes in their offerings for American expats. And almost always, the path leads in the direction of cutting back on the services on offer for these American clients – or, perhaps most common, announcing that they will no longer accept or maintain the accounts of any American clients at all who reside outside of the U.S.

Perhaps for this reason, Charles Schwab rival Interactive Brokers was keen the other day to stress that if anything, it was expanding its overseas presence rather than cutting back – though its main focus in Expatland is not just on American expats. 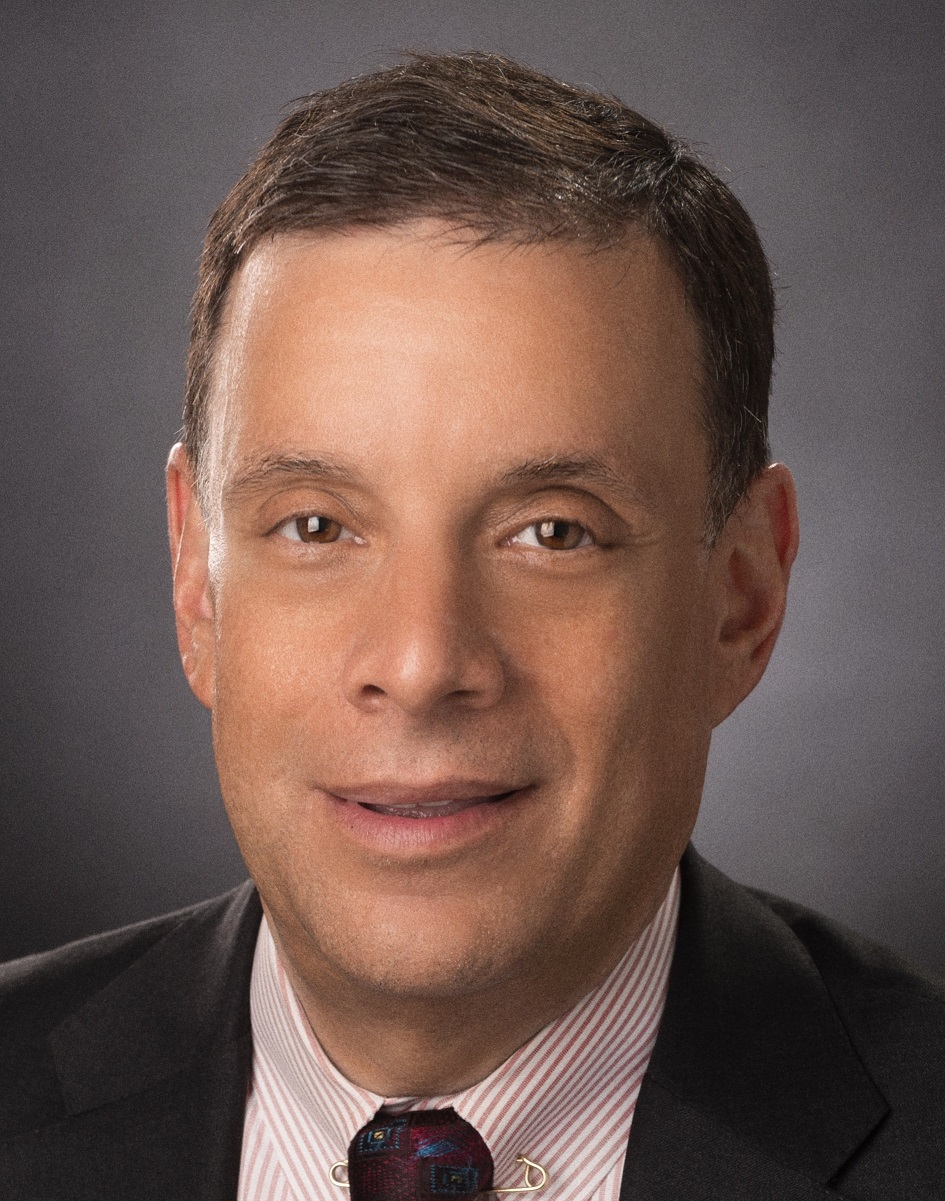 “Today we are getting around two-thirds of our new business enquiries from overseas rather than from the U.S., although the largest number of our actual clients is, for now at least, still in the States,” Steven Sanders (pictured left), executive vice president of marketing and product development for Interactive Brokers, said, in a telephone interview with the American Expat Financial News Journal last week.

“This comes after we made a significant investment in recent years in automating and building systems that would enable us to take clients from all around the world, in spite of the regulations, compliance and tax reporting requirements.

“As a result, we are fully committed to the UK, the European Union, and Asia, and to our clients in 225 countries around the world.”

In March of this year, around 40% of IBKR's accounts, by number, were held by investors and investment entities in Canada and the U.S., down from 47% at the same point two years earlier. Asian accounts during this time rose to 35% from 27%, while European and African accounts remained about the same. (See table, below right.)

In terms of client equity held on behalf of its clients, though, the U.S. and Canada still represent around 59% of the total, although this is down from 65% in 2017.

As reported here last week, Charles Schwab has been informing those of its clients in Italy and France who don't custody their accounts through a U.S.-based adviser, by letter,  that they must “transfer your assets to another financial services firm as soon as possible” or close or sell their positions, by year-end.

Other direct Schwab clients in Europe are being told they may remain with Schwab if they are comfortable with the fact that their accounts will move to Charles Schwab & Co Inc., the firm's U.S. operation, and that they will begin to deal with its U.S. based “Global Services” team, rather than with UK-based Schwab staff.

The company said the reason for these changes had to do with a “change [in] its business model…mostly due to the UK’s decision to leave the EU”. 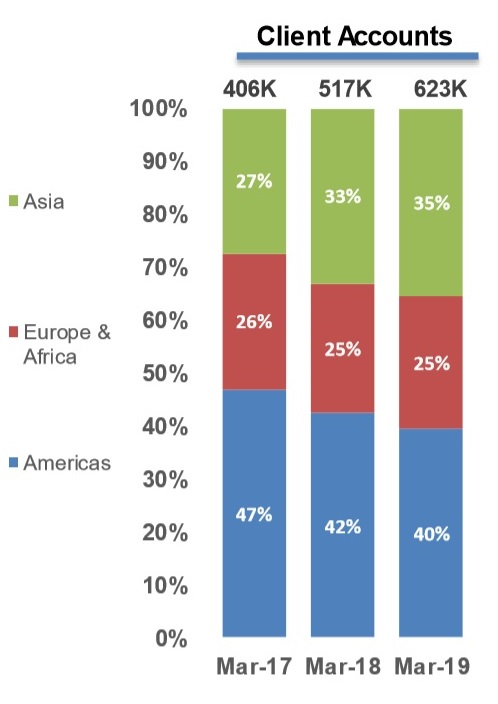 As the AXFNJ and other media organizations have been reporting, the business of keeping American expat clients in overseas markets is a growing challenge for banks, brokerages and other financial services companies.

Competition and increased product transparency have driven margins down to practically nothing, and this has taken place at the same time that a raft of mind-numbingly complex regulations, some affecting American expats only, have come into force over the past decade.

And if all that weren’t enough, for companies looking to service clients in Europe, as Schwab noted in its explanation for its recent changes in the EU market, there’s also Britain’s planned departure from the European Union.

Brexit, as this departure is called, will mean that the UK will no longer be able to participate in the bloc’s financial services “passporting” facility.

Both Schwab and Interactive Brokers have relied for years on their London outposts to service their European businesses until now, though IBKR also currently has offices in Estonia and Hungary, both of which are also in the EU, in addition to offices in eight other jurisdictions and is in the process of opening a 12th non-U.S. office in Singapore. One of these other offices is a major IBKR facility in Zug, Switzerland.

(Interactive Brokers' London offices are located in the Heron Building on Bishopsgate, pictured above, one of London's most-recognizable new towers.)

Sanders admits that Interactive Brokers (IBKR) is “looking at the options” with respect to opening another EU office, but says he can’t discuss the matter in any detail for now, as such talk would be frowned on by the regulators in question.

“But it’s worth noting that we’re just in the process of getting our licence in Singapore, and that this will give us 12 offices outside the U.S.,” he notes.

‘Gateway to the world’s markets’

While IBKR may be looking to grow its business outside of the U.S., initially its USP was the other way around: to bring the world to U.S. investors, in the form of the ability to trade stocks and other assets on dozens of stock exchanges, from major ones like the London Stock Exchange and Euronext to such less-well-known ones as the Tel Aviv Stock Exchange and Moscow Exchange (both of which IBKR added to its stable earlier this year).

“For years our slogan has been ‘The professional’s gateway to the world’s markets’,” Sanders says, adding that the motto is emblazoned on the company website’s homepage (which it is). As of the end of March of this year, roughly half of its 623,000 brokerage accounts were held by individual traders and investors (see pie chart, below). 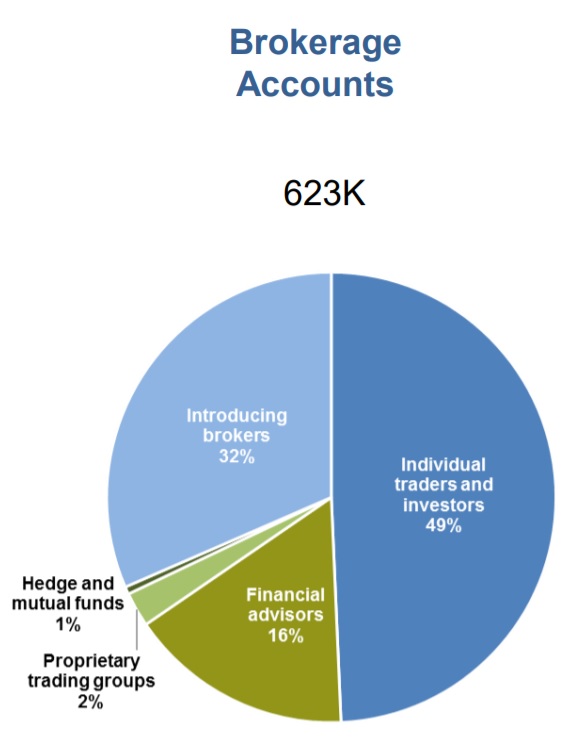 “We offer trading on more than 125 markets, in 31 countries, in 22 currencies. We’re on every exchange, and with our Universal Account clients can trade stocks, options, futures, forex, bonds and funds, all around the world, from one online account.”

Despite such numbers, Interactive Brokers is still seen back in the States as the upstart challenger to the country’s “big four”: Fidelity, Pershing, TD Ameritrade and, largest of all, Schwab.

The company was founded by Thomas Peterffy in 1977, when he bought a seat on the American Stock Exchange and began trading as an individual market maker in equity options.

Through the 1980s, Peterffy and a handful of colleagues began to build a business that sought to use computers to give them an edge on the trading floor, a concept that at that point was in its infancy.

Originally doing business as the Timber Hill Group, the company changed its name to Interactive Brokers Group LLC in 2001, at which point its combined electronic brokerage and market making volume was exceeding 200,000 trades a day.

Sanders is reluctant to comment in detail on Schwab’s recent announcements with respect to its clients in Europe, though he notes that Schwab also recently revealed it was closing its Singapore operation as well, after only two years in operation, and that “they certainly aren’t having Brexit in Singapore too”.

But he says IBKR would “certainly welcome” any of Schwab’s European clients who wanted to move over to its platform.

“We’d be very happy to partner with Schwab, in any way, to make it easier for their clients,” he added.

Advisers who look after American clients outside the U.S., and typically help them with their brokerage and custodial accounts, said they were relieved to hear that Interactive Brokers was intending to continue looking after clients in Europe – though said they believed it would need to open an office in Dublin, Paris or Frankfurt rather than relying on its Hungarian or Estonian outposts to look after its cross-border European business, once the UK is no longer part of the EU's passporting network.

(One adviser sent a link to an Interactive Brokers FAQ page which, in addressing a question about the company's plans "to continue servicing clients in Europe", noted that "IBKR is in the process of opening a new entity in a European jurisdiction that could potentially allow you to continue your operations through us uninterrupted, regardless of the Brexit outcome. We are working with regulators on the final details and we hope to prepare a formal announcement soon.")

With respect to Charles Schwab, another adviser said it was worth noting that Schwab's business model is significantly different from IBKR's, given that in addition to its trading and custodial facilities for investors, it is "a bank, which offers checking accounts and various types of banking products", thus enabling its clients, at least those in the U.S., to take advantage of certain benefits and discounts across the range of services that being a client might offer.

Tom Zachystal, president of Menlo Park, California-based International Asset Management, which has clients who are also IBKR clients, said his only observation was that although Interactive Brokers "makes it seem like it's a seamless global business, the fact is that when their clients move from one country to another, they may need to open a new account with a new IB entity.

"For example, an IB client living in Australia moves to Switzerland – they cannot simply change the address on their IB account, they have to open a new account with IB UK, and then request a manual transfer of assets from the old Australian IB account to the new IB UK account.

"This manual process can take a month for Interactive Brokers to complete. I know this because we have just lived through it with one of our clients.

"I would add, though, that at least they do get it done, whereas other U.S. custodians might not even touch this kind of a transfer at all." 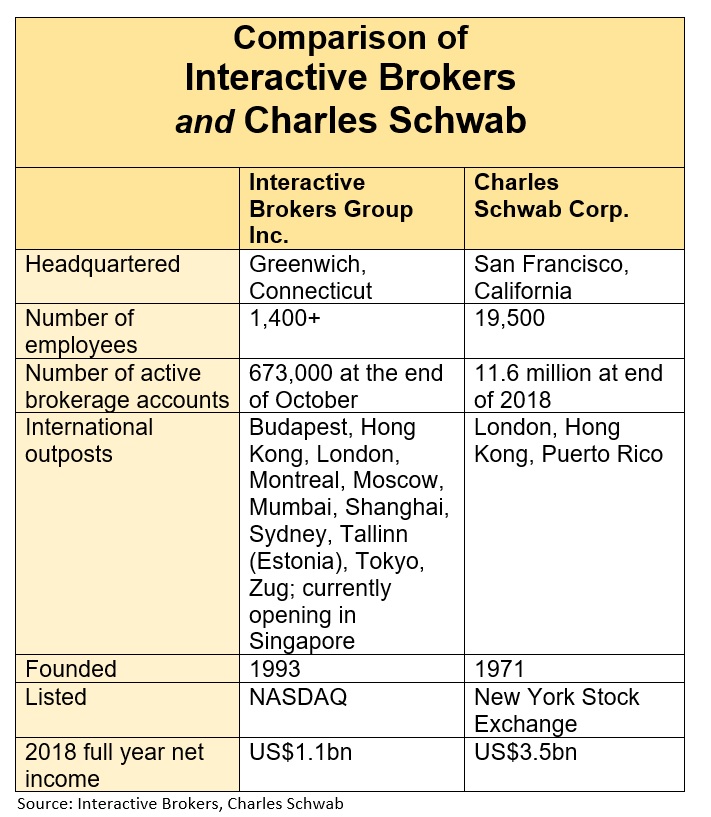