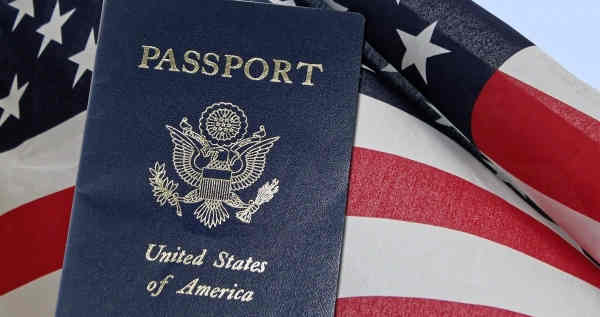 Once again the latest quarterly renunciation data from the U.S. Treasury Department shows what appears to be a significant plunge in the number of individuals who officially renounced their U.S. citizenships in the most recent three-month period. However, Treasury spokesmen and even some citizenship renunciation experts are urging expats not to read too much into the numbers.

According to the latest "Quarterly Publication of Individuals Who Have Chosen to Expatriate", which the Treasury Department publishes four times a year on the website of the Federal Register, just 183 people formally renounced in the three months to the end of September. This is down from 1,104 in the same period in 2018.

Combined with the previous two quarters' data, this brings the total number of renunciants' names published thus far this year to just 1,810, which is 2,164 names short of last year's full-year total of 3,974.

This year's Q3 names filled only four PDF pages on the Federal Register's website, compared with the 16 PDF pages required for the Q3 renunciants' names in 2018.

As reported here in March,  last year's total for the year was 22% lower than 2017's  5,133 renunciations, which was itself the first time in five years that the full-year number was actually smaller than the previous year's total.

The year with the most renunciations ever was 2016, when the names of some 5,411 individuals were published on the Federal Register.

All of these numbers are low when compared with the number of Americans said to live outside the U.S. The State Department has put this number at around 9 million, but others, such as the American Citizens Abroad, believe it's probably closer to 5.1 million.

Among the names that were not on the most recent list of renunciants was that of former Sri Lankan presidential candidate – and as of two days ago, Sri Lankan president – Gotabaya Rajapaksa. As reported, the failure of his name to appear on the Federal Register's Q2 2019 list of expatriated individuals made news in Sri Lanka earlier this year, because, according to The Sri Lanka Guardian, the country has a law that prohibits someone from seeking the office of president of the country or serving as president "if they are a citizen of any country other than Sri Lanka".

Since that time, a Sri Lankan court overruled a legal challenge to Rajapaksa's Sri Lankan citizenship that had been based on his American citizenship, and thus enabled him to stand for the presidency and be elected.

Also not on the list, as Canadian media organizations pointed out in the last few days, was the name of  Canadian Prime Minister Justin Trudeau's main challenger of the moment, Andrew Scheer. Scheer, who is the leader of Canada's Conservative Party, acknowledged last month that he had dual Canadian-U.S. citizenship, but added that he is in the process of renouncing the American one.

As in the past, a  spokesperson for the Internal Revenue Service today played down the significance of the quarter-to-quarter fluctuations in the renunciation data, standing by a previous IRS statement that "we cannot publish the names in the Federal Register until we receive the information needed to make a determination of the expatriation".

“We do not publish names of former citizens until we receive a CLN [Certificate of Loss of Nationality] from the State Department, and we do not publish names for former long-term permanent residents until we have both the information from USCIS [U.S. Citizenship and Immigration Service]  and the 8854 from the individual expatriate," the IRS statement continued.

It added that the Federal Register list is compiled from information "provided by the State Department and the Department of Homeland Security, as well as the Forms 8854 filed with the IRS," which "many, but not all, affected individuals are required to file."

The IRS spokesperson didn't say whether the closing of all but seven of the USCIS's 23 outposts around the world, which is currently under way, might be contributing to a delay in the data being assembled, but at least one industry observer suggested this could be a contributing factor to a deadline that was already proving challenging to meet every three months.

Earlier this year, the USCIS announced it would keep open only those of its offices in Beijing and Guangzhou, China; Nairobi, Kenya; New Delhi, India; Guatemala City, Guatamala; Mexico City, Mexico; and San Salvador, El Salvador. Since then, a number of offices have closed, and others are winding down their operations. 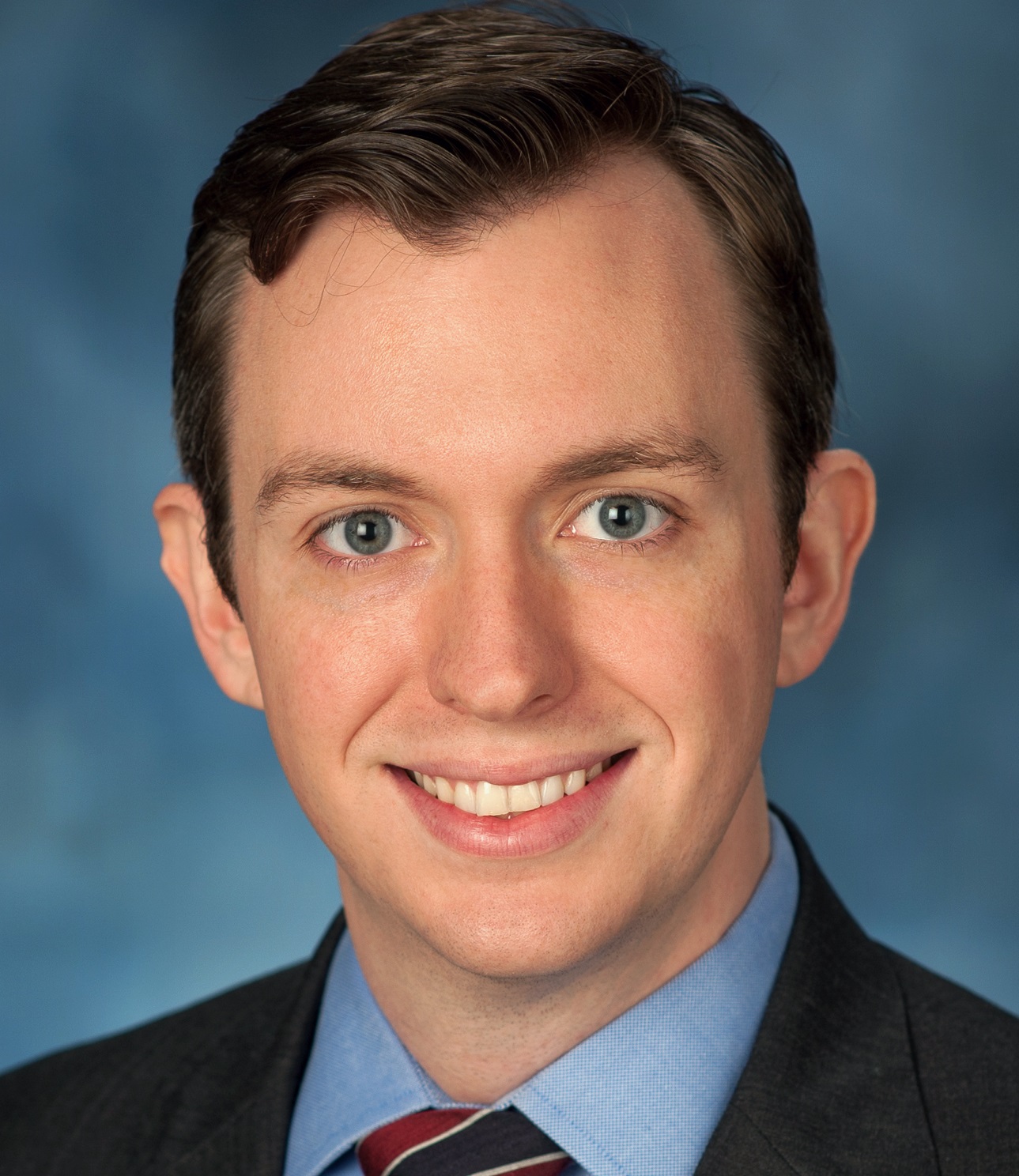 The U.S.-headquartered law firm Butler Snow LLP, with offices in Europe and Asia as well as the U.S., says it has helped many Americans expatriate over the years. Asked today about the fall in the reported number of renunciants in the most recent quarter, and what some say seems to be a trend for renunciant numbers to be falling that runs counter to interest in renunciation on the part of expats, London-based Butler Snow lawyer John Wood, pictured left, cautioned against reading too much into the Federal Register data.

"The Federal Register has never been an accurate snapshot of expatriates," he said.

"Some individuals' names never show up [on that list] and some, or even most, appear later than would be expected.

"I have always said that it is impossible to draw conclusions from the Federal Register reports, because the information is incomplete and even potentially inaccurate."

Wood went on to note that a glance at Butler Snow's own client records revealed a consistent lack of consistency between when its clients formally had expatriated, and when their names appeared on the Federal Register list.

A review of these records indicated that individuals' names often appeared months or even a year after their expatriation date, he said.

As for consumer demand for help with expatriation, meanwhile, Wood said Butler Snow has seen little change in the call for such services.

"It has been generally consistent over the years. I certainly don't think that there has been a reduction in the [need for help by] individuals [looking] to give up their citizenship."

However, he added, "there have been upticks, such as when the law was changed in 2008, and recently, as the awareness about 'accidental Americans' has become more mainstream." 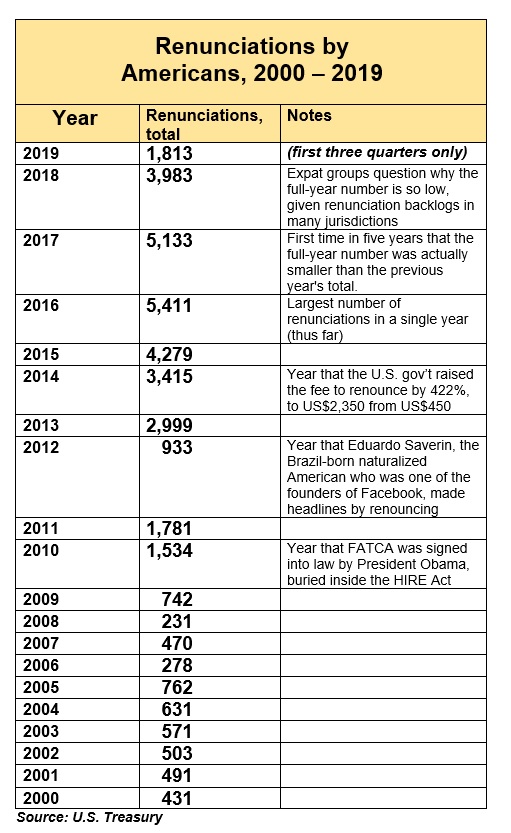 Along similar lines, one recent citizenship renunciant, who requested anonymity, told the American Expat Financial News Journal today that she has been keeping an eye out for her name on the Federal Register for almost a year now, but that it had yet to appear. “In two weeks’ time, it’ll be a year since I officially renounced.”

She added: “The ‘summary’ at the top of each list in the Federal Register clearly says: ‘This listing contains the name of each individual losing United States citizenship (within the meaning of section 877(a) or 877A) with respect to whom the Secretary received information during the quarter ending’, followed by a specific date.

“I’ve always thought it was bad enough that they even publish renunciants’ names in the first place, as this makes public what is for most people a sensitive and ideally private decision to give up their citizenship. The least they could do is publish our names accurately within the time period they are meant to.”

Until President Obama signed the Foreign Account Tax Compliance Act into law in 2010, the number of Americans who went through the formal process of renouncing their citizenships was a relatively un-noticed phenomenon. After FATCA came into force, however, and the U.S. began to penalize expats who had been failing to file tax returns and/or so-called foreign bank account reports (FBARs), among other transgressions, renunciations began to rise (see table, left).

But contrary to what some observers realize, it seems that Federal Register-watchers have been claiming to detect under-reporting of renunciant names as far back as 2015. That was the year that a comment piece on the International Tax Blog website noted that the IRS appeared to be "missing a significant number of names from its quarterly publication of expatriates".

"First, based on data recently released by the State Department and the FBI, the estimated number of Certificates of Loss of Nationality  applied for or issued during the fiscal year ending September 30, 2015 is roughly 6,000," the comment piece, submitted by an American law firm, went on.

"However, for the first three quarters of the 2015 fiscal year, the IRS has only published 2,857 names."

The comment piece ended with the observation that the reasons that the IRS numbers "come out lower than anticipated" weren't clear, and that, "over time, it appears that the FBI data is similar to the IRS data."