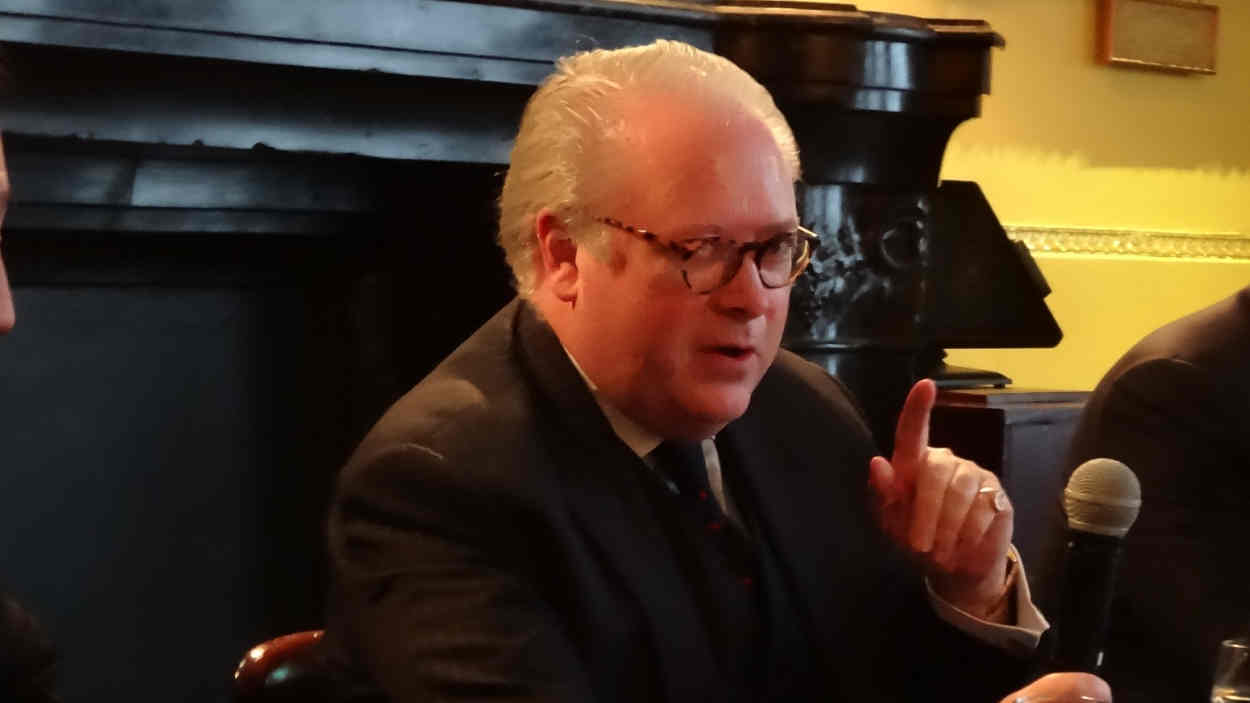 Rep. George Holding, at an event in London in April

The Tax Fairness for Americans Abroad Act, a bill introduced into the U.S. House of Representatives at the end of last December by Republican Congressman George Holding that was  met with enthusiastic support by many American expats around the world, now seems unlikely ever to become law, some observers and supporters of the proposed law say.

As reported, Rep. Holding formally unveiled his at-that-point-much-anticipated bill, HR 7358, last Dec. 20, with just hours to go before most of the U.S. was due to close down for the Christmas holiday.

In May, representatives from the Democrats Abroad, the official organization of the Democratic Party for American citizens living permanently or temporarily outside of the U.S., said that they were in discussions  with Virginia Rep. Don Beyer on a range of issues of concern to American expats. At the time, this announcement seemed potentially significant, as Rep. Beyer is a former U.S. ambassador to Switzerland and Liechtenstein, a 2013 recipient of an American Citizens Abroad (ACA) award for services to American expatriates, a member of the House Americans Abroad Caucus and, perhaps most crucially, a member of the House Ways & Means Committee, and for these reasons, seemed the obvious Democratic co-sponsor for HR 7358 that Rep. Holding said his bill needed to progress.

Thus far, however, Rep. Beyer has yet to formally express support for Holding's bill.

On June 18, the ACA posted on its website a webcast that featured Holding's aid Matt Stross, on the subject of the legislation, and speculating on its chances of finding a sponsor and being re-introduced before the 2020 election. At that point Stross mentioned upcoming talks with Rep. Beyer's staff.

By late summer, however, talk of the TFFAAA began to fade. In September, the ACA launched a major online campaign  it said was aimed at encouraging U.S. lawmakers to hold hearings this fall on the “wide range of tax compliance issues” currently affecting Americans resident overseas – including the Tax Fairness for Americans Abroad Act. But even as it did, the Republicans Overseas, a Republican party affiliate, seemed to go quiet on the matter, and its normally-outspoken vice chairman and chief executive, Solomon Yue, shifted his focus to lobbying on behalf of Hong Kong's democracy protesters, an issue that, as a naturalized American from mainland China, he feels passionately about.

Also in September, Democratic Congresswoman Carolyn Maloney, who represents a New York City district and who heads up the Americans Abroad Caucus in Congress, announced she was re-introducing two bills aimed at helping American expats, with Rep. Beyer named as her co-sponsor.

A spokesperson for her office said at the time that she couldn't co-sponsor Rep. Holding's bill because she's not on the House Ways & Means Committee, and he had said that this was what he needed.

Rep. Maloney's bills consisted of a bill similar to the "Same Country Exemption" that the American Citizens Abroad has been calling for since 2015, and  the so-called Commission on Americans Living Abroad Act of 2019 (H.R. 4363), which provided for the creation of an "Executive Commission" that would be comprised of a 10-member bipartisan panel, which would be tasked with "examin[ing] the concerns of U.S. citizens living and working abroad."

Most recently, Rep. Holding's options for remaining in Washington appeared to be in some doubt after it emerged that the voting district in North Carolina that he represents – and which he won by a margin of 51.3% to 45.8% in 2018 – has been redrawn, with the result that he is now representing what the Raleigh News & Observer said yesterday is a "Democratic-leaning" district. And Rep. Holding, the report added, said he was disinclined to challenge another Republican merely to stay in office.

"The districts around me are very ably represented. I wouldn't run against a colleague in one of my neighboring districts," the News & Observer quoted Holding as saying, in an online article with the headline "George Holding, whose district now leans Democratic, won't run vs. GOP incumbent".

As written last December, when Rep. Holding submitted it, H.R. 7358 calls for the U.S. to transition to a system that would provide "territoriality for individuals," a form of a residence-based taxation. American citizens resident abroad would be able to elect to be taxed on the basis of their residency, rather than their citizenship. However, those who wished to continue to be taxed as U.S. citizens would be allowed to do so.

Those supportive of the legislation, including the Congressman himself, said it would enable Americans to become more competitive in the international job market, and freer than they are now to pursue opportunities outside of the U.S.

Some observers said there was still a chance that Rep. Holding's bill could be resubmitted and signed into law before he left Congress, if in fact that were even inevitable; and even if it were, another member of Congress might be found to sponsor it in his place.

"I don't understand this to mean that he isn't running for Congress again, or that his career in politics is over," said Toronto-based lawyer and expat tax campaigner John Richardson.

"I read it narrowly – that he has no intention of challenging a fellow Republican in 2020.  That doesn't mean he couldn't run in 2022, or even run for a Senate seat instead.

"So, although this may not sound like ideal news for Americans abroad, I don't think it should be seen as the end of the road for the Tax Fairness for Americans Abroad Act either.

"On the other hand, it remains unclear why the Democrats refuse to go public in their support for this."

On Thursday, most of those asked to comment on this matter declined, including Rep. Holding's office, Rep. Beyer's office, the Democrats Abroad and the American Citizens Abroad.

However, on Friday, Republicans Overseas chairman and chief executive Yue indicated the "Plan B" was that Rep. Holding would re-introduce his bill in 2020, even if he had to do so without Rep. Beyer as co-sponsor.

"It's very sad to see that speaker [of the House of Representatives Nancy] Pelosi  was recently able to pass the Hong Kong Human Rights and Democracy Act, on a 417–1 bipartisan vote,  for 7.4 million Hong Kongers, while 9 million overseas Americans can't even get a single Democrat Congressional representative to co-sponsor Congressman Holding's Tax Fairness For Americans Abroad Act," he added.

According to its website, the American Citizens Abroad is still encouraging Americans overseas who are interested in "Tax Fairness for Americans Abroad," as it calls its campaign launched in September, to contact their Congressional representatives to urge them to hold hearings on the tax issues facing American expats, and to call for residence-based taxation to replace the current citizenship-based regime. More information on this can be found by clicking  here.

Editor's note: This article was updated on Friday, Dec. 12, to include comments from Republicans Overseas chairman and CEO Solomon Yue.