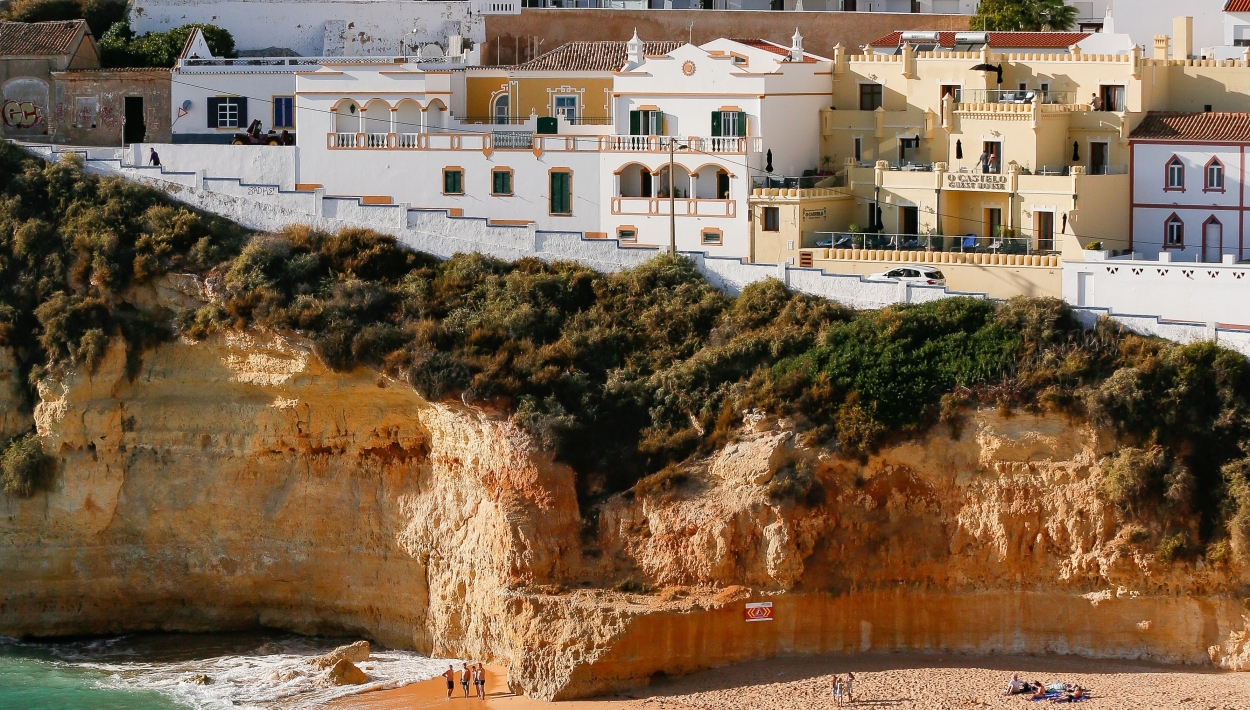 Portugal has leapt six places to top International Living's annual Global Retirement Index, which ranks countries around the world on their suitability for individuals who are looking to retire in a country other than the one in which they currently live.

The next five jurisdictions in order are in Latin America, possibly reflecting an American perspective, since these countries – Panama, Costa Rico, Mexico, Columbia and Ecuador – happen to be popular with American retirees, many of whom would have emigrated to the U.S. from these countries originally, or otherwise have family links.

English is not the official language in any of the top ten countries on the Retirement Index this year, nor was it last year. Anyone with a good grasp of Spanish, though, will have a number of jurisdictions to choose from in which they will find it easier to get around than those who've never studied or spoken the language.

International Living is a magazine and news website for expatriates that was founded in 1979, and today based in Ireland. It says its Retirement Index "is the most comprehensive and in-depth survey of its kind", and that it is based on a "vast amount of hard data"distilled by its internationally-based team of editors and correspondents, with the methodology constantly being refined.

As this and other media organizations have reported over the past 12 months, Americans are retiring abroad in rapidly-growing numbers, as the costs of remaining in the U.S. for what can end up being thirty or more years of retirement become increasingly prohibitive, particularly with respect to healthcare costs.

In September,  a CBS News report cited Social Security data sowing that the numbers of Americans retiring overseas "leapt by 40% between 2007 and 2017", and quoted experts as pointing to the fact that growing numbers of Baby Boomers are discovering they didn't save enough to maintain their standard of living at home.

Although the median amount Americans hitting age 65 currently have set aside for their retirements is US$152,000 – "the highest of any working generation" – "one in five say they haven't yet recovered from the recession" and might never do so, the Transamerica Center for Retirement Studies has said.

Currently some 413,000 Americans are drawing their Social Security benefits from outside the U.S., which is still a relatively small fraction of the nation's 42 million retirees.

Americans aren't the only ones increasingly retiring abroad, though, notes Nigel Danzelman, an executive with an Isle of Man-based financial services provider, RL360, whose end-use clients are largely expats of other nationalities. "While hard numbers are difficult to come by, we are clearly seeing a trend for more and more people in developed countries to retire abroad," he says.

"The Baby Boomers are the most well-travelled generation to reach retirement age, so it is less of a leap for them to take the decision to move overseas for a new adventure once they stop working.

"But it also reflects that we are living longer, and our retirement pot will need to fund us for longer. By moving overseas to a location where the cost of living is lower, your savings will buy you a much better lifestyle than you might afford in your home country.”

Detailing some of the reasons that Portugal scores so highly, International Living's Portugal correspondent, Tricia Pimental, cites the obvious atractions of its value for money ("Portugal is the second least-expensive country in Europe, after Bulgaria; my husband Keith and I find we spend about a third of what we did to live in the States"). Nor can you ignore, she says, its "bustling capital, brilliant sun, tantalizing beaches, and verdant valleys", nor the fact that it's "rated the third-safest country in the world [by] the 2019 Global Peace Index", and still "beautiful".

"But truthfully, for me the number one reason is more ephemeral: it’s the overarching sense of well-being we experience here," Pimental adds.

"The country’s natural geographical beauty blends with its architecture of various eras, dating back millennia, to evoke a sense of permanence and timeless tradition.

"When you add to that the kindness and gentility of the Portuguese people, it is a winning combination."

Where she lives, she continues, a comfortable if not extravagant lifestyle can be had for about US$2,500 a month, though this would be closer to US$3,000 in such places as Porto in the north, the country’s capital of Lisbon, or in the expat beach havens of Cascais or the Algarve.

Dan Prescher, senior editor at International Living, says that the "main takeaway" for him of the 2020 Global Retirement Index is that it highlights the fact that "the world isn't a static place... things change all the time, everwhere".

"Economies, political situations, climates, even tastes and trends change, and that gets reflected in the index," he continues, "because we use not only numbers and facts but the reports and subjective opinions of our correspondents, editors and writers, who actually live the expat life."

At the same time, the index is unavoidably influenced by such factors as the introduction of or changes to countries' resident visa programs, the way health care is provided to non-citizen residents and even simply "a buzz from the expat community that attracts attention", he notes. Such was the case last year in Portugal, where growing numbers of North American retirees and near-retirees had been observed to be getting excited about the European country's "combination of affordability, European culture, easy access and [the fact that it has] seasons", which many Americans prefer to having the same weather all year 'round.

Similar elements came into play with the move into this year's Top 10 of France and Vietnam, Prescher reports, where there were "more and more reports from correspondents" detailing the quality of life available at a price in both.

That said, "most of the countries International Living seriously considers as good places for expats to retire or settle are places that are pretty stable in the long run," even if some occasionally experience "bumps in the road" now and then.

Below is this year's International Living Global Retirement Index Top 10, and next to it, last year's.

To see a comprehensive report on this year's International Living Global Retirement Index, including, towards the end, an "interactive table" that enables you to view and compare 24 popular retirement jurisdictions on the basis of various characteristics, including lifestyle, governance and financial matters, click here. 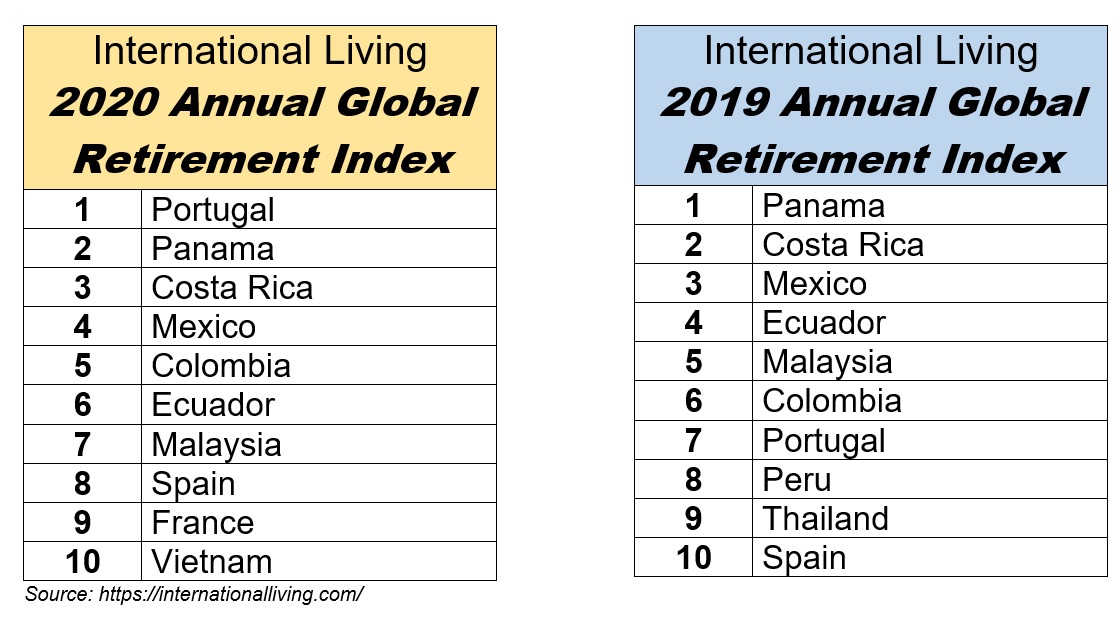