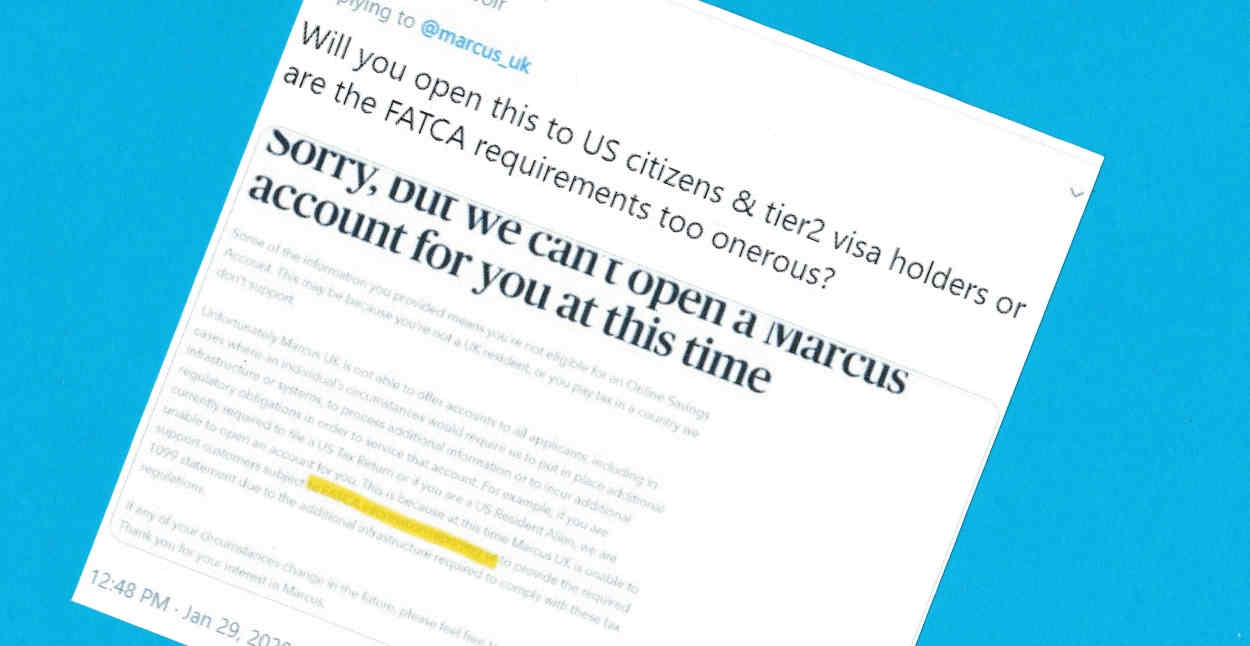 Goldman Sachs, the giant New York-based investment bank that in recent years has been moving into the individual wealth management sector, has confirmed that for the time being, at least, it is unable to offer its Marcus-branded services to Americans resident outside of the U.S., owing to FATCA concerns.

A Goldman spokesperson confirmed on Friday that this was in fact the case, in response to questions prompted by at least one tweet that was making the rounds over the last few days.

In that tweet (pictured above), someone named "Matthew" posted an excerpt from a Marcus document which stated that "Unfortunately, Marcus UK is not able to offer accounts to all applicants...

"At this time Marcus UK is unable to support customers subject to FATCA information reporting or to provide the required 1099 statement due to the additional infrastructure required to comply with these tax regulations."

In a statement, the spokesperson said that outside of the U.S., "Marcus by Goldman Sachs is subject to the Foreign Account Tax Compliance Act (FATCA). At present, we do not have infrastructure to support compliance with FATCA for people who are subject to or potentially subject to US tax rules."

Goldman Sachs first unveiled Marcus's UK banking services to its UK staff in August, 2018, and since then has been adding to its UK offering, including with an instant access savings acount aimed at ordinary – as opposed to high-net-worth – clients.

"There are people in the world who think this is okay," observed one of those who re-tweeted Matthew's tweet, pointedly making sure to address it to the Twitter accounts of such individuals as American presidential candidate Elizabeth Warren, and including such hashtag words as fatca and citizide.

In shunning American clients, particularly with a product aimed at ordinary investors – where low costs and the highest interest rates possible on savings accounts will be seen to matter – the American company is not alone.

As reported here in October, for example, Paris-based Boursorama Banque, an online-only banking division of Société Générale, the French banking group, drew the ire of the Paris-based Association of Accidental Americans because it also would not allow American expats to have accounts, even though it had begun running advertisements for the brand that featured the American actor, Brad Pitt.

And as this publication has been reporting for the last few weeks, banks in the Netherlands as well as, reportedly, other countries in Europe have begun "freezing" the bank accounts of some of their American account-holders whose "Tax Information Numbers", usually Social Security numbers, these account-holders had failed to provide, despite repeated requests that they do so. Many of those who have refused are understood to be citizens of the countries in which they now live who are reluctant to enter the U.S. citizenship net because they don't consider themselves to be American.

Meanwhile, whether Americans resident in the UK will be able to take advantage of a just-announced Vanguard advice offering also remains unclear. As the Financial Times reported on Jan. 9,  the U.S. ETF specialist Vanguard has been given "the go-ahead" by the UK's Financial Conduct Authority to launch a new "retail investment guidance" business in Britain, which development the FT said "[signaled] the arrival of an aggressive new competitor in Britain's wealth management sector" that would "turn up the heat on the fee models operated by UK wealth managers".

However, a spokesperson for Vanguard told the American Expat Financial News Journal this week that it was "a bit early to speculate" as to whether American expats would be able to take advantage of the new UK advice offering.

"We really are at an early point," he added, noting that the FCA approvals had only just come through at the end of December, and the Vanguard team was still "thinking through what the proposition will offer and to whom".

Signed into law in 2010 by President Obama and brought into force, through the use of Intergovernmental Agreements with individual countries, in 2014, FATCA was intended to address the use by U.S.-resident Americans of overseas bank accounts to avoid their U.S. tax obligations. It has made life increasingly difficult for expat Americans, however, many of whom have been driven to renounce their citizenships in an effort to find peace, even though this is an expensive and for many, a painful process to undergo.

The numbers of renunciants has soared in recent years, by most accounts as a result.

One of the aspects of the problems FATCA is causing for American expats that isn't always acknowledged is that it's often the least-wealthy who suffer the most. That's because financial institutions don't want to have them as clients, as the costs of complying with FATCA eat up a much larger percentage of whatever income they might make from these individuals' accounts than would be the case with a high-net-worth client – as the Marcus example suggests.

Such individuals are also more likely to suffer when they're hit with IRS penalties that typically start at US$10,000, which, again, is not as much of a problem for wealthier clients, who probably are less likely to get hit with such penalties in the first place because they will be getting their taxes done for them by top tax preparers.