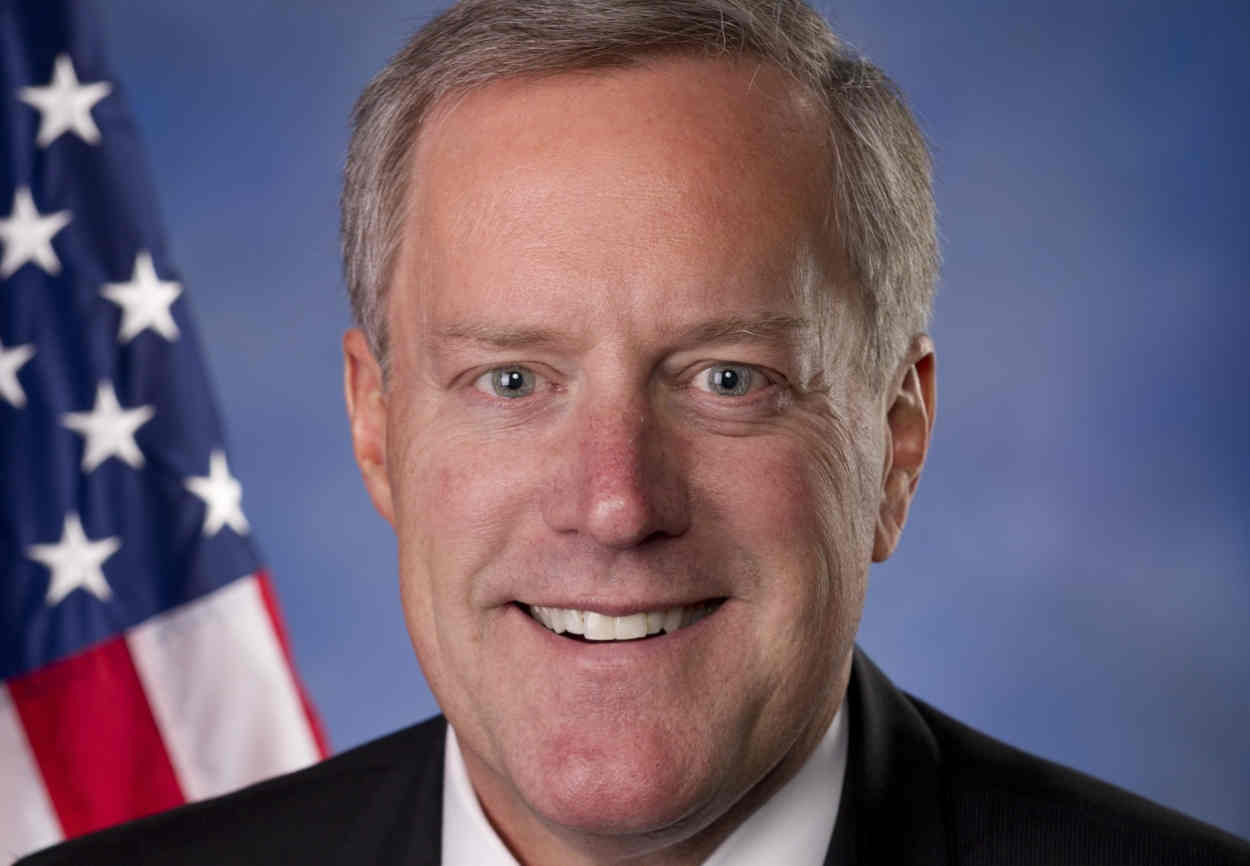 Mark Meadows, a Republican Party stalwart who introduced a bill aimed at repealing key elements of the Foreign Account Tax Compliance Act (FATCA) in September, 2016, has been named to replace Mick Mulvaney as chief of staff in President Trump's administration.

The news was immediately greeted by Republican expatriates as a sign that their voices might be heard more clearly by Republican policy-makers in the lead-up to this November's presidential election.

Meadows, who represented North Carolina in the House of Representatives, had announced that he would not run for re-election to his seat. He will become Trump's fourth chief of staff in 38 months, the most that any U.S. president has had in such a short time, according to U.S. press reports. 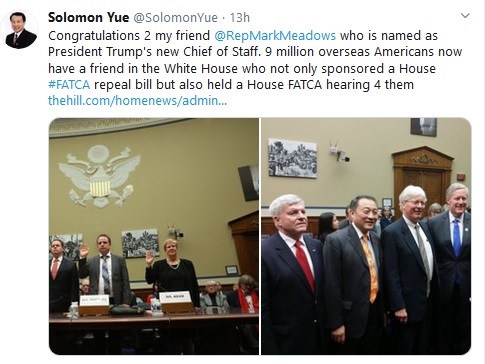 Meadows is also co-chair of the Americans Abroad Caucus, alongside New York Democratic House of Representatives member Carolyn Maloney. According to his profile on the American Citizens Abroad's Americans Abroad Caucus page, he was "born at a United States Army hospital in Verdun, France, where his father was serving in the Army, and his mother worked as a civilian nurse."

Said Solomon Yue, Republicans Overseas vice chairman and chief executive, in a tweet (pictured left): “Congratulations 2 my friend @RepMarkMeadows who is named as President Trump’s new Chief of Staff. 9 million overseas Americans now have a friend in the White House who not only sponsored a House #FATCA repeal bill but also held a House FATCA hearing 4 them thehill.com/news/admin…"

Fabien Lehagre, president and founder of the Association des Américains Accidentels (Association of Accidental Americans), also welcomed Meadows's appointment, as he believes Meadows is likely to be "sensitive to the problem of accidental Americans because he was born in France".

"Fortunately for him, the French legislation is not [like that] that of the United States, otherwise he would be an 'accidental French'," Lehagre added, a reference to the fact that French citizens like him, who were born in the U.S., have life-long tax obligations to the States because they are viewed as American citizens, even though they don't consider themselves to be and have lived only briefly, if ever, in the U.S.

Less optimistic was Keith Redmond, a Paris-based campaigner on behalf of American expat and citizenship issues. "Please note that the FATCA hearing was in April 2017," he said, in a comment on Twitter.

"That was a good thing."

But it it is now March, 2020, Redmond went on, and there is "no bipartisan support" for issues like FATCA in Washington.

A 'state-mate' of Rep. Holding

Americans abroad who have been eager to see Washington lawmakers make changes to the way the U.S. treats its expats will note the fact that Meadows hails from the same southeastern U.S. state as George Holding, the Republican congressman who introduced what he called his Tax Fairness for Americans Abroad Act"  in the closing hours of 2018.

As reported, Holding has said that he also doesn't intend to seek re-election this year, and will leave his seat at the end of 2020, but a Republican Overseas official told the American Expat Financial News Journal in December that Holding would try to reintroduce the bill before he leaves office.

Meadow's 2016 bill, H.R. 5935, would have "repealed "provisions of the Foreign Account Tax Compliance Act, included as part of the 2010 HIRE Act, that were originally designed to prevent tax evasion by increasing U.S. Government access to foreign bank accounts held by US citizens”, according to a press release on Rep. Meadows's website in 2016, on grounds that FATCA violated Americans’ Fourth Amendment privacy rights.

Like a number of other legislative and legal efforts aimed at killing off FATCA, which, as a U.S. Government Accountability Office report last April noted, has caused major problems for American expatriates in particular and contributed to a "nearly 178%" increase in the rate of citizenship renunciations between 2011 and 2016, Meadows's bill failed to make its way into law.

FATCA was introduced by President Obama in 2010, buried inside a domestic jobs bill known as the HIRE Act, and came into force around the world in 2014. It was and continues to be facilitated on a jurisdiction-by-jurisdiction basis by means of intergovernmental agreements (IGAs) agreed between the U.S. and each individual country.

It was conceived in response to the revelation that a number of non-U.S. banks had been enabling American taxpayers to avoid their tax obligations by stashing money in offshore accounts, but it caused immediate and continuing difficulties for Americans resident abroad.