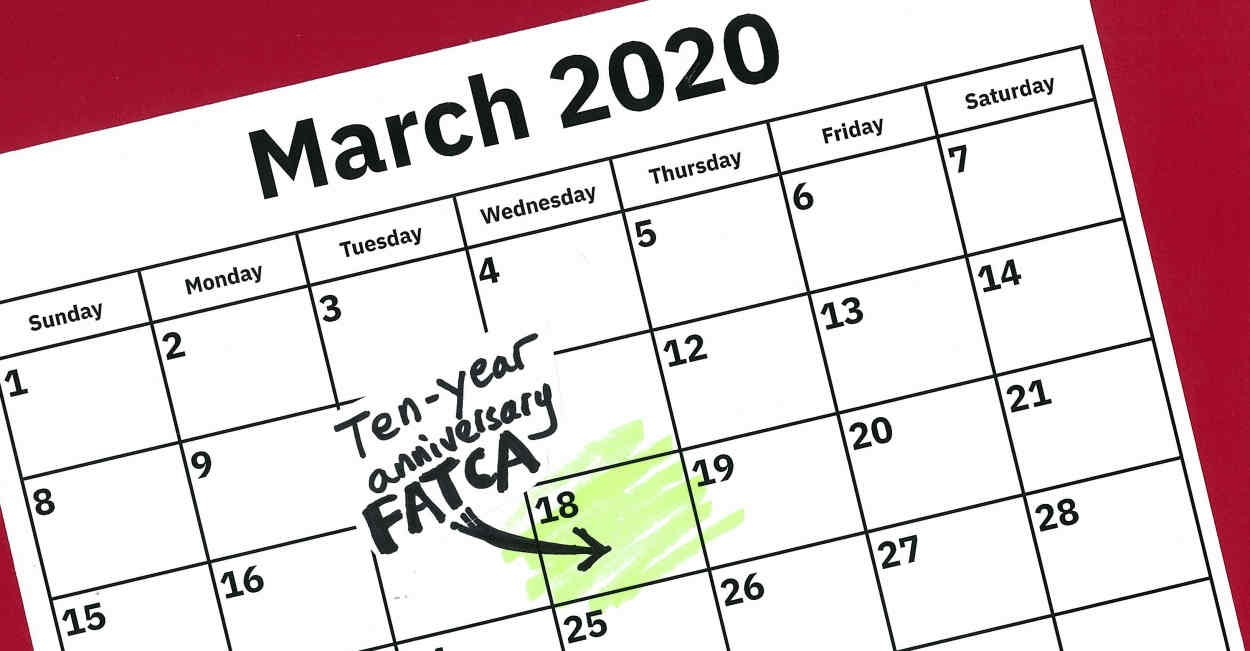 Ten years ago today, in the Rose Garden of the White House, President Obama signed the Foreign Account Tax Compliance Act into law.  But surprising as it might now seem to some, the fact went virtually unnoticed by the world's media, as the legislation was buried deep inside a domestic jobs bill known as The HIRE Act, and wasn't even mentioned in the press materials, which focused instead on what the HIRE Act would mean for U.S. workers.

"Obama Calls Jobs Bill a First Step" was the headline of the New York Times  website article that day, accompanied by a photograph of the left-handed president signing a document at a desk, surrounded by onlookers gazing smilingly at the page in front of him.

One of the few organizations to sound the alarm at the time was Withers, the London-based, international law group with outposts in 17 cities around the world, including London, Geneva, New York and Hong Kong.

In a message to clients before the bill became law, Withers noted that the un-talked-about provisions having to do with the overseas bank accounts of Americans – essentially an entire earlier piece of legislation known as the Foreign Account Tax Compliance Act, which in turn evolved out of the Stop Tax Haven Abuse Act of 2007, that had been subsumed into the Hiring Incentives to Restore Employment (HIRE) Act of 2010 in order to provide funding for it – would "dramatically affect most non-U.S. financial institutions, funds and collective investment structures as well as many trustees and family offices investing through these entities”.

How right an observation this proved to be, we now realize.

But it was weeks and in many cases, months, before most of the rest of the world began to realize the enormity of what that hidden element of the HIRE Act would soon come to mean for American expats and dual citizens around the world.

Ten years on, few organizations are formally marking the occasion today, as it has ended up coinciding with an unprecedented global health emergency that among other things has seen governments everywhere ordering their citizens to remain at home if at all possible, potentially for months, depending on the country and their situation.

There will, though, be plenty of people who will be quietly aware of the date's significance  – not least many of the countless thousands of U.S. tax practitioners stateside and abroad, who have benefited from the explosion in the need for their expertise from American expats around the world over the past decade.

Many of these expats only discovered that the U.S. expected them to file a tax return every year when a bank informed them that they were regarded as "U.S. persons", even though they had spent their lives thinking they were citizens of another country, where they now live and in which they had spent most if not all of their lives.

Also conscious of today's date will be citizenship experts and lawyers who have built entire businesses around helping Americans to renounce their citizenships in the wake of the signing into law of FATCA.

The numbers of those driven to renounce by FATCA was actually a key point raised in a U.S. Government Accountability Office report into FATCA last year, which noted that the introduction of the law in 2010 had contributed to a "nearly 178%" increase in the rate of citizenship renunciations between 2011 and 2016, even though it didn't actually come into force until 2014.

2014, as these citizenship renunciation experts will be well aware, happens to have been the year that the U.S. raised the fee for renouncing one's U.S. citizenship by a whopping 422%, to US$2,350 from US$450, making it the world's highest such fee.

And yet this didn't even seem to slow the exodus. In 2016 some 5,411 Americans gave up their passports and Green Cards, compared with 1,534 the year FATCA was signed, and just 742 the year before that. The numbers have dropped off recently, but by all accounts the government isn't reporting the names of all of those who are renouncing, making the actual current numbers anyone's guess.

As for what the future holds for FATCA, it's anyone's guess.

The adoption by the rest of the world of a "global FATCA", the Organisation for Economic Co-operation and Development's Common Reporting Standard, has made FATCA's data reporting requirements seem less unreasonable than some FATCA opponents originally, and even now, have claimed them to be.

But for many it has reinforced calls for the U.S. to move to a residency-based tax regime rather than one that's based on citizenship, although convincing U.S. lawmakers that this is a change that needs to be made is seen as an uphill and potentially impossible battle.

For now, then, it seems Americans abroad have little choice but to follow the advice of John Richardson, a Toronto-based American lawyer, who is an avid observer and chronicler of the American expatriate tax and citizenship scene.

Says Richardson:  "the post-FATCA meaning of U.S. citizenship, for tax-compliant Americans abroad, is – Report early. Report often. Report everything. And keep a record of what you report."