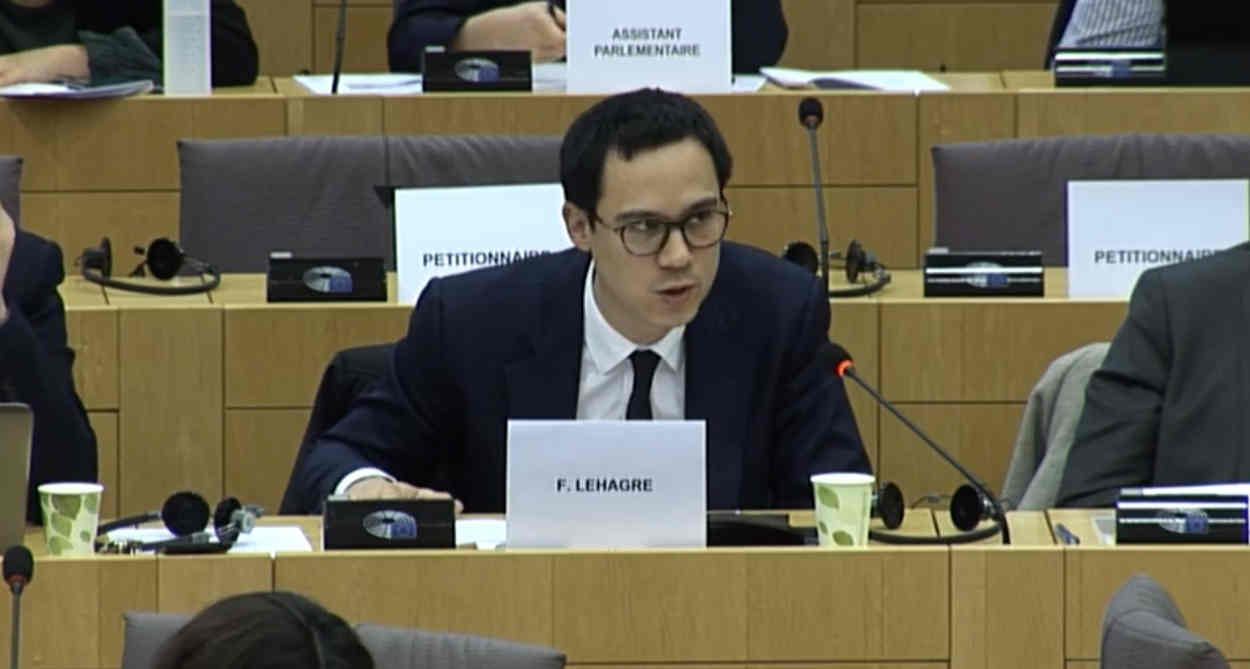 Fabien Lehagre, at a European Parliament hearing on FATCA last November in Brussels

Fabien Lehagre, the U.S.-born and France-resident president and founder of the Paris-based Accidental Americans Association, has called on U.S. Secretary of State Mike Pompeo to "drastically...reduce the costs associated with the renunciation procedure", in order that so-called accidental Americans could give up their U.S. citizenship if they wished to.

Lehagre's plea came in the form of a letter dated March 10, a little more than three months after the office of the president of the Council of the European Union wrote to Treasury Secretary Steven Mnuchin, asking him to do the same thing – a fact that Lehagre included in his own correspondence.

"Accidental Americans" is the name given to individuals who are citizens of countries other than the United States, but who are deemed also to be a U.S. citizen, by virtue of the fact that they were born there to non-American parents, but typically only discovered this fact recently, often after being informed by a bank that has declined to have them as a client because of the fact of their being a "U.S. person". Such "accidentals" often regard their American citizenship as a burden rather than something to be pleased about, as it introduces costs and complications they hadn't anticipated.

As the Council of the European Union president's office noted, Lehagre told Pompeo in his letter, the expatriation fee had been raised in 2015 from US$450 to US$2,350,  "an increase of 422%", which represented, Lehagre noted, "a real obstacle for accidental Americans who wish to renounce [their] citizenship".

Lehagre said he was addressing Pompeo now because the Internal Revenue Service had recently announced a new procedure aimed at making it marginally easier for accidental Americans to cut their ties with the U.S.

"But [this] measure ignores the high cost to Accidentals of hiring experts to find out whether they qualify for the new tax break, to help them file their tax declarations, and [to help them with] the [renunciation] procedure," Lehagre added.

"US$2,350 is an exhorbitant sum, and does not correspond at all to the real cost of the procedure," he went on.

"This is what emerges from a recent report published on 25 February 2020 by the Office of Information and Regulatory Affairs of the Executive Office of the President.

"According to [that] report, State Department calculations show the cost of the procedure is [just] $20.25 per person."

Lehagre concluded his letter by saying: "Therefore, on behalf of the accidental Americans I have been representing around the world for the past five years, I would ask you to kindly instruct your administration to reduce the costs associated with the renunciation procedure drastically, so that accidental Americans can get rid of their unwanted [American] nationality if they so wish".

Lehagre signed his letter on behalf of the Accidental Americans Association, and copied it to six high-ranking White House executives, including Treasury Secretary Mnuchin, the recently-named White House Chief of Staff Mark Meadows, and Chair of the House Oversight Committee Carolyn Maloney.

Lehagre told the American Expat Financial News Journal today that he had yet to receive a reply from Pompeo or any of the others who had been copied in to the letter.

He also pointed out that before FATCA was signed in 2010, Americans who wished to give up their citizenships were allowed to do so without having to pay any fee at all, as the US$450 fee was introduced that year.

Lehagre was born in the U.S. but came to France as a baby, and has lived there ever since. He founded the Association des Américains Accidentels (Association of Accidental Americans, or AAA) in 2014.

Although it's not known exactly how many "accidental Americans" exist outside the U.S., European Parliament data puts the number believed to reside in the EU at around 300,000, of whom around 40,000 are thought to live in France.

As reported, the European Parliament in July, 2018 voted unanimously to approve a resolution supporting the cause of Europe's accidental Americans.