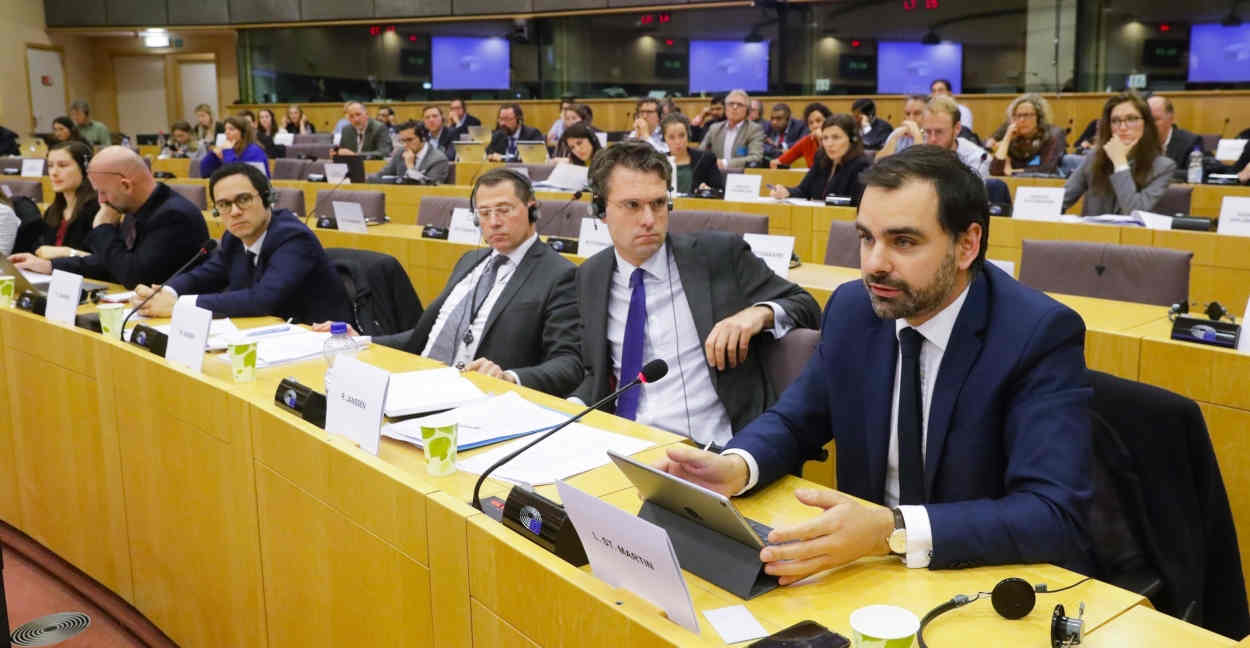 Above, a two-and-a-half-hour hearing the European Parliament held last November in Brussels on the subject of FATCA, at which a number of accidental Americans testified

Accidental Americans and other Americans resident overseas have been reacting to a top U.S. Treasury official's response to a European Union official's concerns over certain aspects of the American tax evasion-prevention law known as FATCA.

In social media postings on Twitter and Facebook, most seemed to share the opinion of Paris-based Association des Américains Accidentels (Association of Accidental Americans, or AAA) president Fabien Lehagre, who told the American Expat Financial News Journal today that the March 12 letter by Lafayette G. "Chip" Harter to the head of the EU Council's head of tax did "not in any way address the concerns of the EU member states" about the way the U.S. enforces FATCA, and seemed to regard so-called "accidental Americans" like him "as if we were slaves to the United States".

Accidental Americans – a term Lehagre noted that Harter didn't use once in his four-page letter to Terhi Järvikare – are individuals whom the U.S. considers to be American citizens, even though they are bona fide citizens of other countries and may have lived most if not all of their lives outside of the U.S., but typically were born in the States, often of non-American parents who were passing through.

Because the U.S. operates a citizenship-based rather than residence-based tax system, such individuals are expected to file tax returns and potentially pay taxes to the U.S. for their entire lives, unless they formally renounce their U.S. citizenships.

In his letter, Harter addresses Järvikare as "Mr.", even though the director general of Finland's Finance Ministry's Tax Department is a woman.

Harter starts his letter by acknowleging that the U.S. has "continued to appreciate and value our collaboration with the European Union and its member states in countering offshore tax evasion and improving international tax compliance" ever since 2012, "when we first announced Model Intergovernmental Agreements (IGAs)", which the U.S. uses to implement FATCA (the Foreign Account Tax Compliance Act, signed into law in 2010 by President Obama).

However, he  goes on to stress the importance of enforcing "those laws" that ensure that all "U.S. citizens are compliant with their U.S. tax filing obligations", including "EU residents who are U.S. citizens"  –  and that in doing so they need to "provide a taxpayer identification number (TIN) (usually a U.S. Social Security Number) on their [tax] return".

As this and other publications have been reporting, many accidental Americans don't have TINs because they have grown up outside of the U.S., unaware until recently that they were considered to be Americans, and as a result of not knowing this, have never entered the U.S. tax system and are now reluctant to do so, even though non-U.S. financial institutions are under growing pressure from the U.S. to provide this information about their U.S. account-holders.

Harter then explains that the U.S. has no plans to relax the existing legislation that is compelling the banks to report the TINs of their clients, which, as reported, has prompted some EU banks  to begin freezing the accounts of those American citizen clients of theirs who, they say, have ignored repeated requests to provide them with a TIN.

There had been some thought that the U.S. might extend a deadline, which expired at the end of December, which allowed foreign financial institutions to be considered in compliance with FATCA, even if they had American account-holders whose TINs they didn't have. In October, the IRS sought to lessen concerns by adding a new question to its FATCA FAQs page, in which it noted that any financial institution that had a client who lacked a TIN "would have at least 18 months from the date of the notification of noncompliance to correct the TIN error before the IRS took any further action".

Among the points Harter makes in his letter that were singled out by some of Harter's social media critics for criticism was his observation that, although the U.S. recognized that there were a certain number of EU residents "who were not aware until recently that they were U.S. citizens...we have received only anecdotal information about the extent of this situation".

While it is true that it's not known exactly how many "accidental Americans" live in Europe, estimates are that there may be around 300,000.

Many other American expats have lived abroad for decades, even if not as long as accidentals, and are known to resent having to file U.S. tax returns every year in addition to their local tax returns. This is said to be particularly true among those approaching and well into retirement, as their income tends to be constrained, and they are also beginning to confront such issues as how they might best leave their wealth to their loved ones, in such a way that won't end up seeing Uncle Sam as their main beneficiary.

In a statement, the Washington, D.C.area-based American Citizens Abroad noted that the issue raised by Harter's letter "and other tax reporting complications highlight the importance of the United States moving away from citizenship-based taxation and adopt residency-based taxation".

Paul Atkinson, chair of the banking committee of the Paris-based Association of Americans Resident Overseas, and a retired OECD official, agreed that CBT is the problem, not FATCA per se.

The problem with Harter’s response to the EU’s concerns specifically, and the U.S. government’s approach to enforcing FATCA more generally, is that a complete “fix” of the U.S. tax code is what is needed – not merely, for example, an extension of the just-expired “grace period” during which non-U.S. financial institutions would not be required to produce the TINs of their American clients, he told the American Expat Financial News Journal.

“That would only ever be, at best, a short-term palliative,” he added.

As he see it, the problem is not the information exchange program itself, but its combination with a citizenship-based tax regime – and the fact that foreign governments have not challenged the U.S. over this, even though it is seeing the U.S. extra-territorially tax their citizens.

“So long as non-U.S. finance ministries align themselves with the US Treasury and continue to endorse FATCA – as reflected in the continued use of the IGAs, and effective registration of 350,000 FFIs [“foreign financial institutions”] worldwide as IRS agents – rather than their own citizens, the problems will not go away.”

In fact, Atkinson added, the truth is that Järvikare’s letter on behalf of the Council of the EU last December “was probably not taken very seriously in Washington”, where officials are believed to see the EU’s overall resistance to FATCA as relatively minor.

“First and foremost, the accidentals need the support of the governments of the countries in which they now live and are taxpayers and citizens, including their Ministries of Finance, before they can hope for any joy in confronting the U.S. Treasury.”

Among those also commenting on Harter's letter to Järvikare was "USCitizenAbroad", a regular on the IsaacBrockSociety.ca website, which was founded in 2011 by a group of dual U.S./Canadian citizens who had found themselves caught up in the initial FATCA crackdown on Americans abroad.

Some expat observers said they thought that Harter's letter suggested how unaware Washington officials may be of the growing discontent among certain foreign governments about the fact that the U.S. doesn't "reciprocate" bank account information with the countries that supply it with data about its own citizens' bank accounts, and yet also doesn't participate in a global automatic information exchange that most other countries around the world have signed up to, known as the Common Reporting Standard (CRS). Widely seen as based on FATCA, this has come into force in the last couple of years under the auspices of the Organisation for Economic Cooperation and Development.

"Harter's U.S. bubble view demonstrates that he’s incapable of grasping the problem of the U.S. imposing its tax code outside the U.S., on tax residents of other countries."

Referring to a recent Tax Justice Network report that called the U.S. the world's No. 2 tax haven, behind the Cayman Islands, Redmond added: "With no FATCA reciprocation and no CRS participation,  non-Americans who reside outside the U.S. are able to freely hide money from their own countries' tax authorities in states like Delaware, and in U.S. real estate holdings.

"If you're an American, and Uncle Sam is telling you that you need to pay tax to the U.S., even though you're also paying tax in Switzerland, and you know for a fact that Swiss nationals are hiding their wealth in Delaware, how are you going to feel?"

As reported in December, Järvikare, on behalf of the Council of the EU and in a letter addressed to U.S. Treasury Secretary Steve Mnuchin, formally urged the U.S. Treasury to urgently address "the problems faced by residents, financial institutions and governments of the EU Member States in relation to FATCA".

It was this letter that Harter says he is replying to.

Among other detailed recommendations, the council urged U.S. Treasury Secretary Steve Mnuchin to "lower the cost of renunciation [of U.S. citizenship]" for Americans resident abroad, many of whom have been struggling to maintain non-U.S. bank accounts in the countries in which they now live, and of which they are, as the letter noted, citizens and taxpayers.

The AAA said in December that the Council of the EU's letter to Mnuchin was significiant because it represented the first time that the full European Union had taken such an action with respect to FATCA, which has been a growing concern in certain EU countries in particular since it came into force in 2014.

As reported, the European Parliament held a two-and-a-half hour hearing last November into FATCA, and the difficulties it was causing to many dual EU/American citizens. Among those testifying were certain key officials from the European Commission, who largely defended the EU's policy with respect to FATCA thus far. They included a representative of the European Data Protection Board, which is being called on by the accidental Americans to do more to stand up to the U.S. over its demands for their personal data, as required by FATCA, as well as a representative of the European Commission's Directorate-General for Justice and Consumers.

FATCA was aimed at cracking down on Americans who made use of overseas bank accounts to hide their wealth from the U.S. tax authorities, but because it relies on non-U.S. banks and financial institutions to provide the data on those of their account-holders who are "U.S. persons",  it has shone a spotlight on accidental Americans around the world. It is thought that some financial institutions and countries are more zealous about reporting FATCA information to the U.S. than others, although such information is not made public.

Last April, the U.S. Government Accountability Office published a report that many observers saw as highly critical of the way FATCA is being implemented. Among its findings was that the law had contributed to a "nearly 178%" increase in the rate of citizenship renunciations between 2011 and 2016.