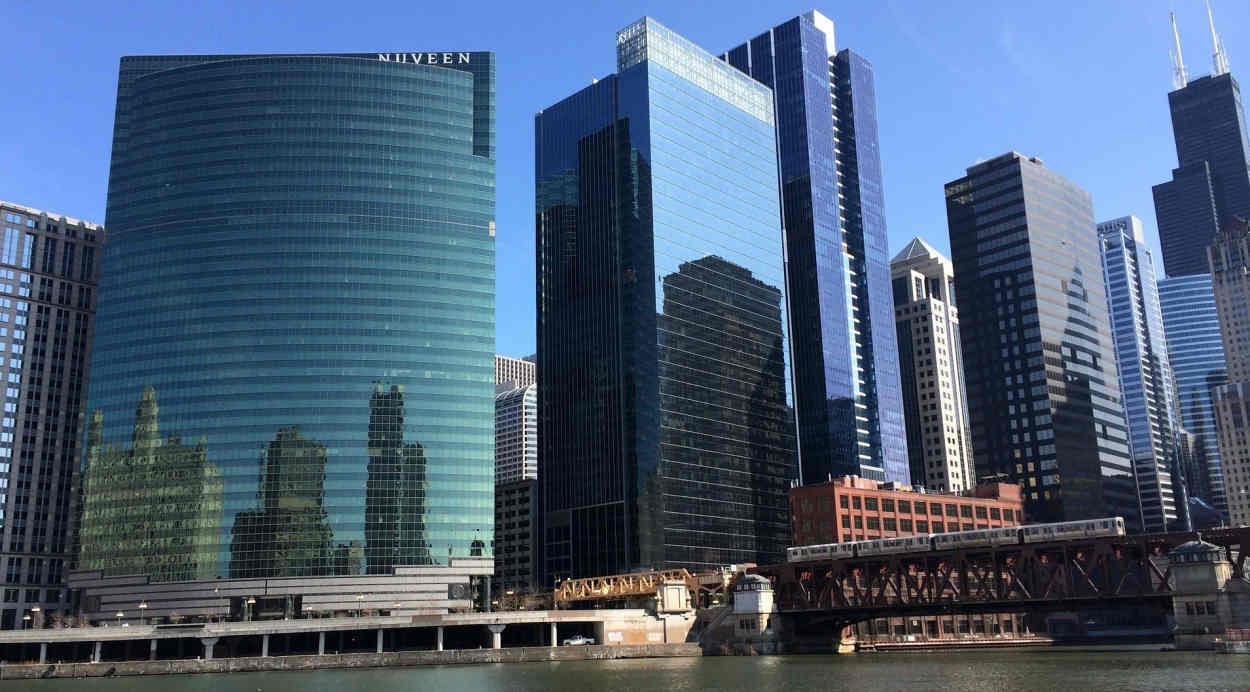 Two lawsuits were filed in the U.S. on Friday against President Trump and other key U.S. government officials over the denial to certain American taxpayers of their right to receive CARES Act "Economic Impact Payments" because they are married to non-American citizens who, though taxpayers, don't have Social Security numbers.

A third lawsuit, being brought by the Mexican American Legal Defense and Educational Fund on behalf of six American citizens who say they were denied the payments for the same reason, was filed on Tuesday, April 28, against the federal government in a Maryland court, according to an Associated Press report.

One of the Friday lawsuits was filed in the U.S. District Court for the Northern District of Illinois, Eastern Division (in Chicago, pictured above) by Blaise & Nitschke, P.C., which is alleging that these American taxpayers' civil rights are being violated, and which is demanding that the U.S. government "declare their rightful entitlements under the CARES Act, and afford them the equal protection of our country’s laws", according to a summary of the lawsuit  posted on the firm's website.

Accompanying Blaise & Nitschke in bringing the suit, on behalf of "plaintiff John Doe, individually and on behalf of the proposed class", is Khalaf & Abuzir, LLC, which specializes in immigration law. The named defendants  are Trump ("in his official capacity as president of the United States"); CARES Act sponsor and Republican Senator Mitch McConnell; and U.S. Treasury Secretary Steven Mnuchin.

In its summary of the case,Blaise & Nitschke  stresses that "the only way these citizens differ from those who are entitled to government funding is that they have chosen to marry non-citizens, which is their fundamental right as citizens of the United States.

"U.S. citizens and their U.S. citizen children, impacted by the discriminatory purpose and intent of the CARES Act’s restrictions, deserve the full protection of our laws."

The other lawsuit filed on Friday, in U.S. District Court for the Southern District of New York, is being brought by a defendant who is understood be an American woman whose husband came to the U.S. on a fiancé visa and who, though a legal immigrant, has had his Social Security Number held up by delays relating to the COVID-19 virus lockdown, according to a source familiar with the case.

As the court docket in that case shows, Jerysse Uzoegwu is bringing her case against the U.S. Internal Revenue Service, The U.S. Treasury Department, IRS Commissioner Charles Rettig, Treasury Secretary Steven Mnuchin, and "the United States of America", because, she says, she is being denied her Economic Impact Payment on the basis that her husband, despite being a legal resident, doesn't yet have his SSN, even though he is in the process of getting it.

No one knows how many Americans are married to foreigners and/or American immigrants and who are therefore in line to miss out on their CARES Act stimulus payments if they filed jointly with their spouses, according to Randall Emery, president of American Families United, which represents the interests of Americans who are married to non-U.S. citizens, although he notes that one unofficial estimate, from the Migration Policy Institute,  places the number at around 1.2 million.

"But this number would not include U.S. citizens married to somebody who is outside the U.S. who does not have a Social Security number," he notes, nor would it indicate how many of such couples filed their U.S. tax returns jointly, as a couple, rather than separately.

Emery and others say that a similar situation, in which Americans married to foreigners lacking Social Security numbers were deprived of payments others were given, occurred in 2008.

Protests of that era are why this time, couples in which at least one of the partners was employed by the U.S. military during the past year are being given the stimulus payments, which they would not have been 12 years ago.

Emery also confirms news reports that "some permanent residents will get the payments, while U.S. citizens are being left out".

At issue in all three lawsuits are one-off "stimulus payments" worth up to US$1,200 that are being provided to all American citizens and Green Card holders who qualify, based on their annual income as detailed on their most recently-filed U.S. tax returns, as a result of a US$2trn stimulus package that was signed into law by President Trump last month.

The so-called Coronavirus Aid Relief and Economic Security (CARES) Act package was conceived to help the American economy recover from the devastating effects of the global coronavirus pandemic.

However, since the program went live, in addition to spouses of immigrants and other non-Americans who lack Social Security numbers being unable to access the stimulus money, Americans at home as well abroad who are understood to be eligible  have been reporting major problems in their attempts to apply for it as well, although the IRS says it is working non-stop to address the issues.

Meanwhile, as reported, a number of Congressional lawmakers from states with large numbers of immigrants, led by California Democrat Lou Correa, earlier this month introduced a bill that would also ensure that immigrant taxpayers – and their American citizen, tax-paying spouses – would be eligible to receive the stimulus payment check under the CARES Act scheme, which is worth a maximum of US$1,200, depending on an individual's gross income, as reported on their most recent U.S. tax return.

Although Rep. Correa's Leave No Taxpayer Behind Act is seen as having "little chance of gaining bipartisan support in the Senate", it could result in "some relief for immigrants in some states," the Los Angeles Times said, in a story last Monday  on the issue of Social Security number-lacking immigrants and their U.S. citizen spouses being left out of the COVID-19 economic stimulus payments.

Emery, of the American Families United, says the bill is likely to "draw attention to the problem" in such a way that even if it isn't passed, its existence would boost awareness of the issues in Washington, with the result that future, larger coronavirus legislation would be more likely to contain fixes.

"Republicans are hearing from impacted constituents, and they are taking note," he added.

Many Americans resident overseas who are married to non-Americans tend to file separately from their spouses, so outside of the U.S., this is seen as a mainly but probably not exclusively "Homeland" issue. However, many American expats also have complicated family situations that often involve Americans married to non-Americans, so organizations that represent such expats are watching the matter playing out in Washington and, now, in two U.S. courtrooms, with interest.

What's more, Paris-based Laura Snyder, the sole international member of the IRS's voluntary Taxpayer Advocacy Panel, says it's wrong to assume mixed-nationality couples in which one of the partners is an American don't file jointly when living abroad – either because they have not been well advised, or because there are situations in which it makes sense to do so.

Married filing separately for mixed-nationality couples can be less advantageous in certain circumstances, she quotes immigration and tax experts as having pointed out, including "when a couple is preparing to move  to the United States from abroad, when it is better for them to file jointly, as a way of showing evidence of the strength of their marriage", which in turn, it's thought, would be seen as better supporting their immigration application.

"When they do jointly file, often the non-resident alien [NRA] spouse has an ITIN rather than a social security number," Snyder adds, referring to what is formally known as an Individual Taxpayer Identification Number – a nine-digit, IRS-issued tax processing number introduced in 1996 to enable those who lacked a Social Security number to file U.S. taxes. According to the IRS's website, the ITIN program is currently undergoing major changes.

The bottom line, though, is that Americans with NRA spouses who have been filing their returns as "married filing jointly" are "out of luck" with respect to the current CARES Act stimulus payment program, even if they have been faithfully filing their tax returns every year, because as the U.S. government sees it, they "both married the 'wrong' person and chose the wrong filing status".

In her opinion, Snyder adds, "there is no justification for discriminating among U.S. citizens in this manner, whoever it is they married and wherever it is they live.

"After all, given the U.S.'s citizenship-base tax regime, the fact of being married to a non-citizen does not reduce a U.S. citizen's obligations as a U.S. taxpayer, regardless of whether he or she lives inside or outside the United States."

“I am aware of the immigration debate in the U.S., and at least understand that the politics surrounding it can legitimately be built into legislation," he said.

"But targeting and penalizing American citizens, including their children, because of a spouse’s status – at least where it is perfectly legal – seems seriously unfair."

That said, he noted, as others have also pointed out, that "those who have not yet filed for 2019 should still be able to qualify for the payment, at least to themselves, by filing separately rather than jointly.”

Atkinson declined to comment on the prospects for any of the lawsuits' potential for success ("I'm not a lawyer"), but said "a legislative fix" was what was "probably" needed, at least in the short term.

Charles Bruce, legal counsel for the American Citizens Abroad and chairman of the ACA's sister organization, the ACA Global Foundation, echoed Atkinson on this point, saying that although lawsuits may call attention to issues, for things to actually change, "it would require an amendment to the law by Congress".

Bruce also noted that in itself the Social Security number requirement wasn't unreasonable for the government to expect of taxpayers, as the government needs to be careful about fraud, "and without an SSN, you don't know who to go after".

"And, if you require a number to be put on a return and someone deliberately and knowingly puts a wrong or fabricated number in there, that person has crossed the line into fraud or crime."

Longer term, both Atkinson and Bruce agree that a proposal by U.S. Democratic Representative Carolyn Maloney for the establishment of a 10-member bi-partisan “Executive Commission”,  which would “examine the concerns of U.S. citizens living and working abroad,” would seem to be “the most promising vehicle for avoiding episodes like this” going forward.

The Federation for American Immigration Reform, which advocates for the U.S. to take a more restrictive immigration policy on key policy issues,  didn't immediately reply to a request for comment on the matter of the denial of coronavirus stimulus checks to American taxpayers married to SS#-lacking immigrants.

However, a spokesperson for the organization, Ira Mehlman, was quoted in a Dallas Morning News story on the subject on April 16 as arguing, as the paper put it, that during times of dire need, the U.S. government should prioritize its own citizens before those of other countries.

Mehlman apparently had not been aware that some U.S. citizens were being barred from assistance in an attempt to carve out unauthorized immigrants from the aid, though, the paper said, noting that when informed of this fact, he added: "People who are U.S. citizens are entitled to all the benefits that they qualify for, but that should not extend to family members who are in the country illegally."

More in this category: « IRS announces 'significant enhancements' to its 'Get My Payment' tool Focus on whistleblowers in Washington, as SEC, CFTC announce latest (un-named) reward recipients »