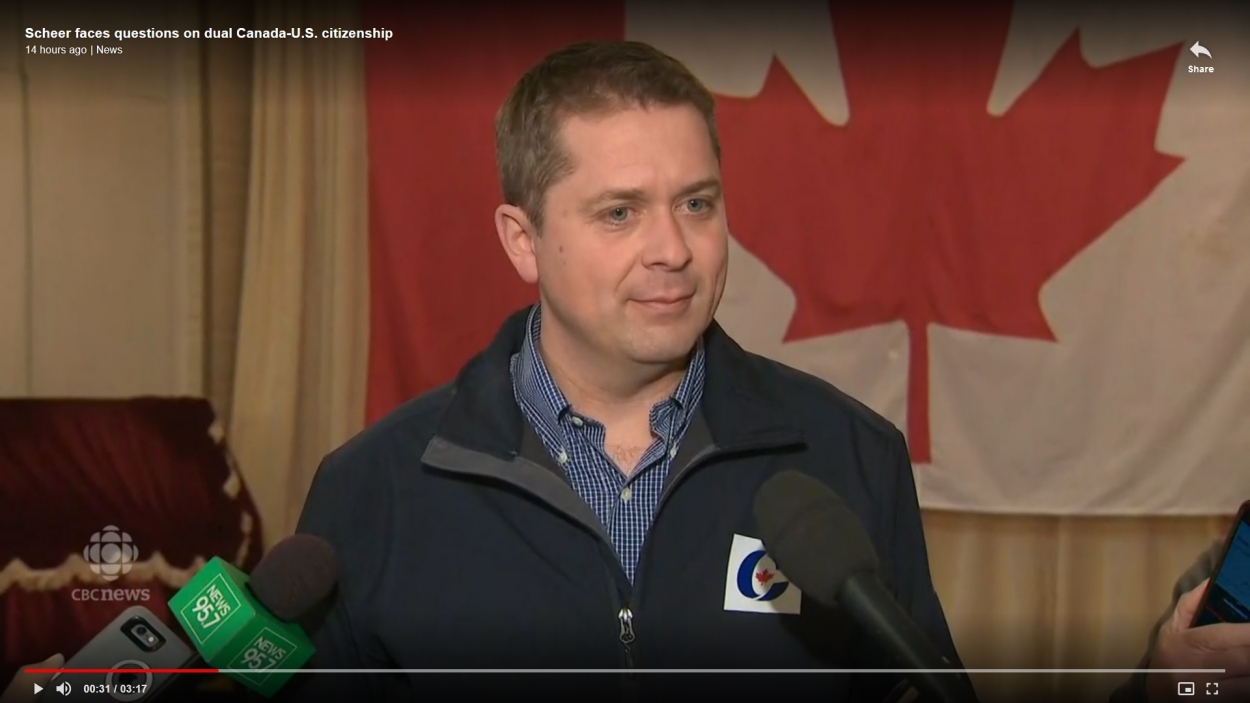 Andrew Scheer at a news conference last year, at which he disclosed his dual citizenship

Last year, while campaigning as the Canadian Conservative Party's candidate to unseat Justin Trudeau as prime minister, Andrew Scheer was revealed to have dual U.S./Canadian citizenship that he'd acquired as a result of his father having been born in the United States, but he insisted that he was in the process of renouncing it.

Seven months on, having failed to win the election and having announced plans to step aside as his party's leader, the Canada-born Scheer disclosed over the weekend that he's changed his mind, and has decided to keep that U.S. citizenship.

Scheer revealed his change of plan on a televised news show on Sunday, saying he had decided to remain a U.S. citizen for "personal reasons", Canada's Globe and Mail newspaper and other Canadian media organizations reported.

“After making the decision to step down, knowing that I won’t be prime minister, I discontinued that process," Scheer said, on CTV's Question Period, of the renunciation. He said he'd "have to go back and check" when exactly he made the decision not to go ahead with it, as he wasn't sure.

According to press reports, Scheer never disclosed his dual citizenship until The Globe and Mail revealed it on Oct.3.

As some observers, including Toronto-based citizenship lawyer John Richardson, noted at the time, even though Scheer was said to have begun renunciation proceedings a few months earlier, he never would have been able to renounce before the election, or even his subsequent swearing in, were he to win, given the time the procedure normally takes. And the reason this would be potentially problematic for Canada, Richardson added, is because unlike other countries, the U.S. extends its laws, tax requirements and threats of penalties to those of its citizens who live abroad – meaning that, had he won, at least for a time, Canada's prime minister would be in a position of facing possible U.S. sanctions.

In being forced to address his dual citizenship in the full glare of publicity, Scheer joined a growing list of non-U.S. politicians who have recently been caught out by the fact of having an American citizenship.

At the same time Scheer was addressing reporters in Canada, for example, a dual American-Kenyan citizen on the other side of the planet was fighting to be allowed to keep her American passport while still being permitted to represent Kenya as its ambassador in South Korea.

During the summer, Somalia president Mohamed Abdullahi Mohamed (also known as Mohamed Abdullahi Farmajo) officially announced that he had voluntarily renounced his U.S. citizenship, as part of what was seen at the time in Somalia as an effort on his part to ensure that his loyalty to the country couldn't be questioned by his political opponents.

Even Scheer had, in 2005, reportedly raised questions about the fact that a then-candidate for governor-general of Canada had been a dual French/Canadian citizen, ahead of her giving up her French citizenship ahead of taking office.

Probably the best-known recent political renunciant, though, is British prime minister Boris Johnson, who had been born in New York but who spent most of the rest of his life in the UK, and renounced his U.S. citizenship in 2016.

Dual citizens aren't barred from holding political office in Canada, which also doesn't impose any restrictions on holding other citizenships, as some countries do. But the fact that Scheer never mentioned his American citizenship before was seen by some as something of an oversight when the story broke last year, although Scheer maintained that he had always been "very honest about" the matter, and that he never mentioned the dual citizenship before last year because "no one ever asked me before" about it.

According to Canadian media, Scheer’s U.S. born, dual citizen father had obtained American citizenship and passports for his Andrew and his two sisters when they were born in Canada.

Scheer said he had filed American tax returns, as American expats are required to do, even if they have other citizenships and reside outside the U.S., The New York Times reported. It added that his campaign team had said separately that Scheer had "never voted in an American election and had let his American passport lapse long ago."