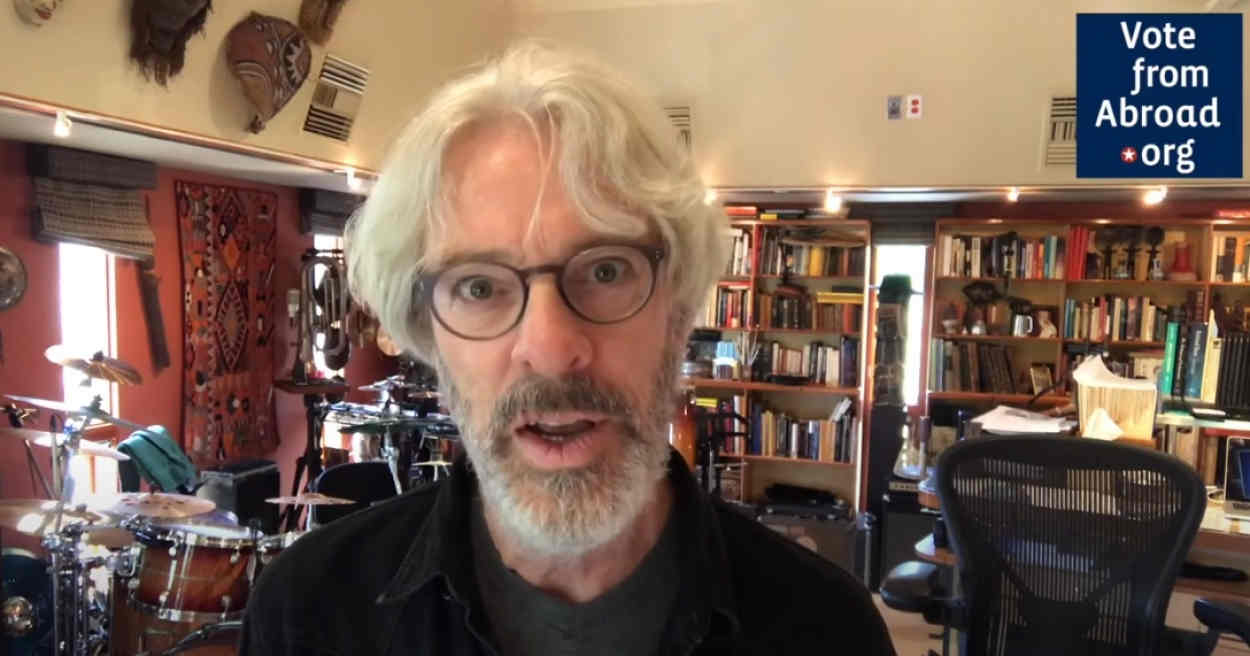 Even some who were die-hard fans, back in the day, of the globally-famous British New Wave band known as The Police, might not immediately recognize the intense, 60-something gentleman with wavy white hair and a salt-and-pepper beard, addressing the YouTube camera in a strong American accent.

A give-away might be a tangle of drums and other instruments visible behind him – particularly for those Police fans who might previously have seen Stewart Copeland’s much-photographed-over-the-years home music studio in Los Angeles, known as the Sacred Grove…

But as Copeland himself admits, many fans are stunned to discover that he not only sounds American when he speaks, but actually is American.

In fact, he spent most of his childhood and much of his early adult life abroad.

This, among other things, is one of the reasons he recently agreed to do this brief video urging American expats to vote, when asked by “an old friend from my London days” if he would.

The video, which may be viewed by clicking here, was first posted three weeks ago, and thus far has had some 1,255 hits.

“Weirdly, I’m probably more patriotic than most Americans, because I’m actually aware of being an American,” Copeland said recently, in a telephone interview from Los Angeles, where he has been hunkered down in his studio, composing and practicing, ever since the coronavirus lockdown came into force there in March.

Gigs he’d been supposed to do over the late spring and early summer have all had to be cancelled, though at the moment, a “Police Deranged for Orchestra” concert currently scheduled for August 22, in Amsterdam, is still on.

“Most other Americans don’t give much thought to being American, because so is everyone else they know,” Copeland went on.

“I, on the other hand, was ‘the American kid’ all my life, even though I hardly knew America, except from TV.”

Born in Alexandria, Virginia, to a Scottish mother and an American father who worked for the CIA, Copeland says he was “shipped over to Cairo” with his mother and three siblings at the age of two months. After that, apart from a few early years he doesn’t remember that were spent back in Virginia, he didn’t return to the States again until he was 18, when he went to college in southern California.

Most of his childhood was spent in Beirut, although he briefly attended a British boarding school in the late 1960s.

After college, it was back to Europe, where he quickly found his way into performing in live bands as a drummer, initially with the progressive rock band Curved Air, and then, beginning in 1977, The Police, which he founded that year, with Sting, and which guitarist Andy Summers joined soon after.

The rest, as they say, is history, with him returning to the U.S. for good – apart from frequent trips abroad to perform with various bands – twenty years ago (2000).

‘Thank you for your
interest in voting!’

Copeland’s Vote From Abroad message on YouTube lasts less than 60 seconds, but benefits from his forceful delivery, and is certain to go viral once it’s discovered by fans – those who are Americans living abroad as well as Homelanders and even non-Americans.

“Hello, all you Americans abroad! Thank you for your interest in voting!” Copeland begins, looking intently at his audience through round glasses (see screengrab, above).

“Because the folks back home are making decisions that affect your life – your taxes, your citizenship, and even, there are different degrees of ‘American’, it turns out, and some of you will probably find that you are less American, because you’ve lived much of your life abroad. And your children are affected as well. “So it’s very important that you exercise your vote as Americans.”

He ends his message by noting that those interested in voting from abroad who are not yet registered to do so can “accomplish this [by getting] your form from VotefromAbroad.org”.

Copeland’s reference to finding out that “you are less American, because you’ve lived much of your life abroad” comes from the heart, as it’s a fact that he says has come up repeatedly in his life.

Initially it was an advantage: had he been living in the States when he turned 18, he might have found himself drafted into the U.S. military, as the Vietnam War was then underway.

But as it turned out, “they were not drafting Americans abroad who were turning 18”, he says, so he was spared.

“The downside came some years later, when I had two sons who had been born in England, but who, to my surprise, I was told weren’t eligible for American citizenship because I hadn’t lived enough of my life in the States before the age of 18.”

Now in their 30s, Copeland’s sons are still British, although one has a Green Card and lives in the U.S., while the other still lives in the UK.

An adopted son, meanwhile, had what Copeland describes as a misunderstanding with U.S. Customs officials when arriving in the States one year ahead of the Christmas holidays, and as a result “will never be able to return, because there is apparently no mechanism or means of changing what they call his ‘undesirable’ status’”.

Three of his other four children – he has seven altogether – live in the U.S. and are Americans, while the fourth, a daughter with his second and current wife, Fiona Dent, lives in the UK. Copeland admits that this daughter, who was born in the U.S. and still has American citizenship, may feel a certain amount of parental pressure this year to “vote from abroad”.

But turning serious again, he adds that all expat Americans should vote in November, not just his daughter.

“My message to expats is this: You do have a stake in this election. Your vote matters.

“Even if you don’t earn enough money to have to pay tax to Uncle Sam, what matters is that you send a message that someone who is voting from overseas is keeping an eye on what’s going on back home.

“It really does matter. So just do it.”

For those readers who are too young to remember the Police, or aren't sure they do, their hits included Message in a Bottle, Don't Stand so Close to Me, and Every Breath you Take.

VoteFromAbroad.org is a nonpartisan voter registration tool provided as a public service by Democrats Abroad. More information may be found at www.votefromabroad.org; also see posts on Instagram @votefromabroad or @students.votefromabroad; on Twitter at @vfaglobal; and on Facebook @VotefromAbroad.

Stewart Copeland fans outside the U.S. who'd like to see him play this year can, in addition to the show scheduled for Amsterdam on August 22, also see him – Covid-19 lockdown arrangements at that time permitting – in Vancouver on Oct. 2 (venue to be announced).  In the meantime, a podcast series he's just completed, called My Father The Spy, about his CIA father's life, is set to go live next month. Information on that will be posted in due course on his website.