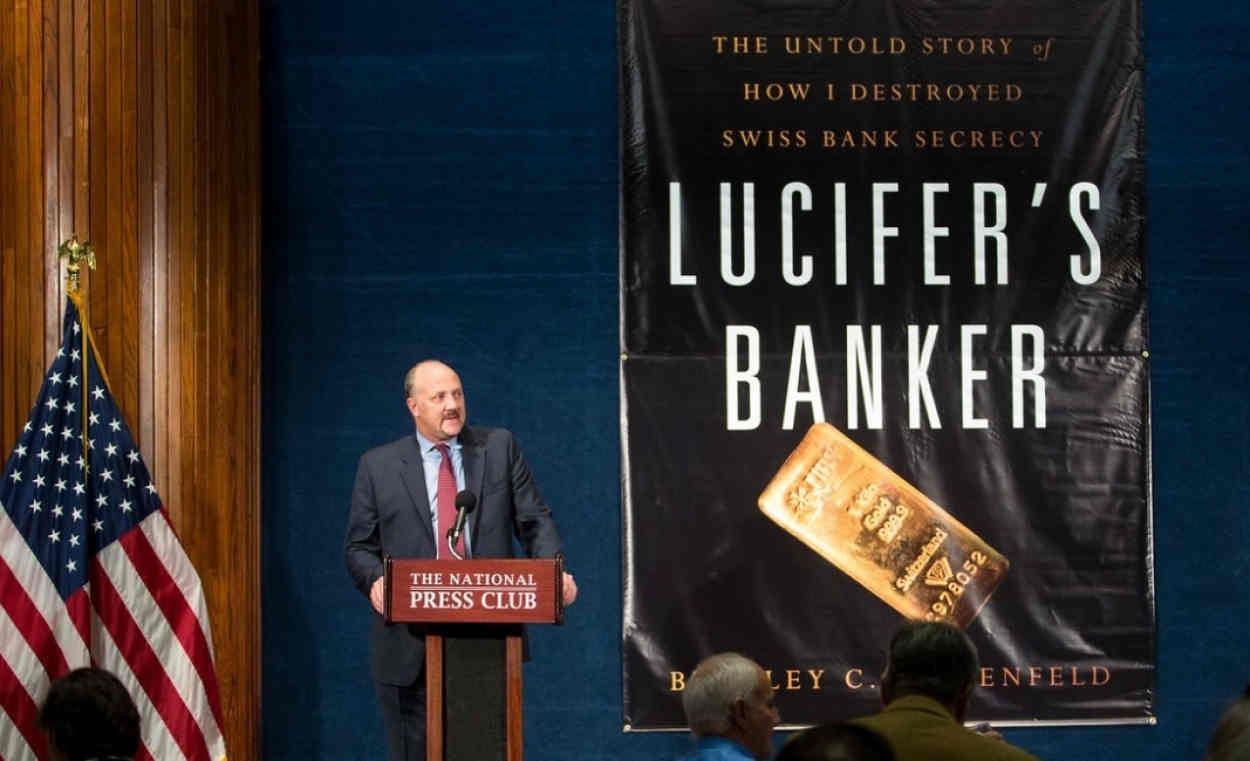 Brad Birkenfeld at the National Press Club, Washington, after the 2016 publication of Lucifer's Banker

On the last page of his best-selling, 2016 saga of his journey from Geneva-based UBS banker to U.S. government whistle-blower, federal prisoner, and finally, recipient of a record-breaking US$104 million whistle-blower award from Uncle Sam, Brad Birkenfeld hinted that he might not be heading for a low-key early retirement in some glossy, upscale gated community anytime soon. Even though he could well afford it. 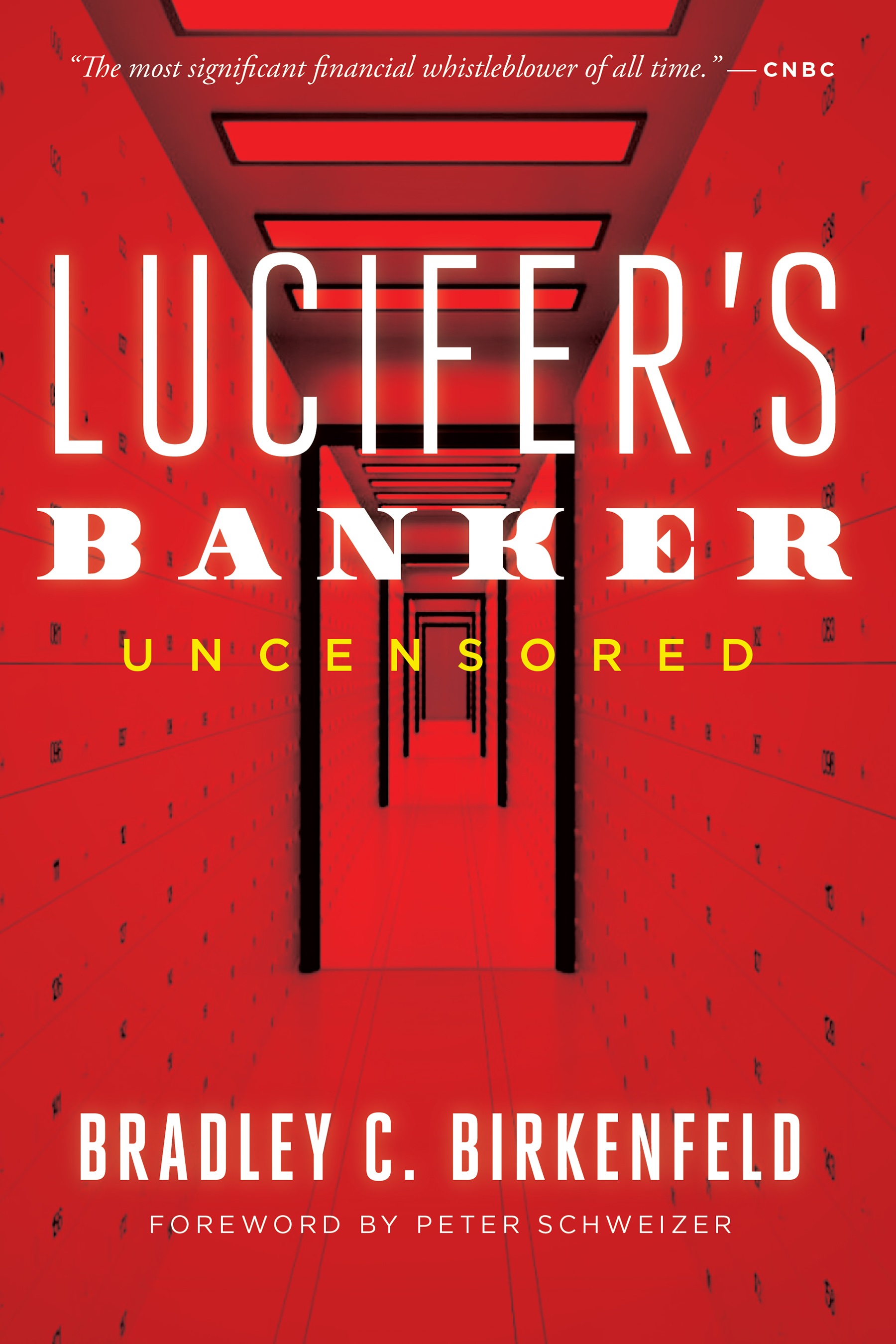 Later this month, evidence of precisely what Birkenfeld has quietly been hammering away at over the past four years will officially be revealed.

That’s because on Sept. 30, a new, updated edition of his book will detail his continuing efforts to, in his words, “further expose the web of corruption that exists at the top of most governments, notably including that of the U.S., and the way it extends into banking and other industries as well as the luxurious mansions and yachts of the super-rich of all nationalities.”

Acknowledging that Lucifer’s Banker UNCENSORED (Republic Book Publishers) is coming out just a month before a U.S. presidential election that’s too close to call, Birkenfeld admits that it could influence some voters, particularly some who are currently planning to vote for the Democratic candidate, Joe Biden.

“He represented the state of Delaware in the Senate from 1973 to 2009, when he resigned to serve as vice president, alongside Obama, for eight years,” Birkenfeld said recently, in a telephone interview.

“During all this time, nothing was done to curtail tax abuse in Delaware, which always ranks near the top of lists of global tax havens, even as the U.S. has criticized other countries for enabling its citizens to hide their wealth.”

The updated edition of Birkenfeld’s book will be unveiled as the world and its media organizations will still be digesting the findings and implications of the latest tranche of leaked documents to be published by the International Consortium of Investigative Journalists.

On Sept. 20, the ICIJ went public with thousands of documents said to reveal how trillions of U.S. dollars’ worth of wealth has been criminally  washed through the global banking system, in spite of existing money-laundering safeguards.

According to published reports carried simultaneously around the world as well as by the ICIJ itself, the revelation of potentially corrupt transactions centered on more than 2,000 “suspicious activity reports” (SARs) filed with the U.S. government’s Financial Crimes Enforcement Network (FinCEN).

The documents in question were said to suggest that a number of major banks had been providing financial services to high-risk individuals from around the world, in some cases even after they had been placed under sanctions by the U.S. government.

"Global banks defy U.S. crackdowns by serving oligarchs, criminals and terrorists" is how the ICIJ headlined its report on its findings, on its website.

From Lake Geneva
to federal penitentiary…

As most bankers and wealth managers for high-net-worth clients will already know, Birkenfeld is famous for having been one of the first whistle-blowers to expose the way certain Swiss banks had been enabling tens of thousands of wealthy clients to avoid their tax obligations in the years before 2007.

It was the exposure of several such previously-secret overseas schemes in a number of countries that led U.S. lawmakers to propose the legislation that eventually became the Foreign Account Tax Compliance Act in 2010, and the Organisation for Co-operation and Development to set up its almost-identical, but global, Common Reporting Standard in 2014, going live in 2017.

Birkenfeld’s story, as he tells it, began in 2005, when the Boston native, then in his early 40s, was working in UBS’s Geneva wealth management offices, as head of business development for the bank.

As he would later explain, he was at the time living the surreal life such bankers tended to take for granted, surrounded by the luxury trappings of their super-rich clients. (The fourth chapter of his book is entitled “Sports cars and models and yachts, oh my!” and begins, “There’s nothing quite like a 2000 Ferrari 260 Modena spider convertible, especially one in candy-apple red…”)

After a colleague pointed out to him that the way that he and his UBS colleagues were helping American clients to hide their assets was technically against the law, he sought to blow the whistle – initially within the company.

When that didn’t work, he resigned, and in 2007 approached the U.S. Justice Department.

His bombshell revelations helped the U.S. authorities to recover more than US$25 billion (and counting) in back taxes, fines and penalties from thousands of tax evaders, while the bank agreed to pay US$780 million, and agreed to turn over the names of some 4,700 of those who’d hidden their wealth in UBS.

(The fact that the names of almost three-quarters of the tax evaders have remained secret even to U.S. Justice Department officials to this day is one of the issues Birkenfeld is still doggedly pursuing, along with the fact that the 4,700 names have never been made public.)

From the day he first came forward, U.S. officials treated him with hostility rather than gratitude for his whistle-blowing, Birkenfeld says, and the next thing he knew, he had become the only person – even now – to be sent to prison in connection with what he says was a massive program of systemic tax evasion.

It was while in prison, serving what would end up being 30 months of a 40-month sentence, that he applied for, and was given, a whistle-blower award of US$104 million – as noted above, the largest such reward ever.

In 2015 he moved to the island of Malta, where he remains resident today ("for the weather, cuisine, history, boating and English language," he says), and he remains a U.S. citizen – and taxpayer. (Asked about this, he notes that as a result of the whistle-blower award he has paid "more than US$40 million in taxes" over the last few years, "in addition to helping the U.S. to recover more than US$25 billion" as a result of his whistle-blowing.)

And now for the
rest of the story…

As this article was being written, press copies of Birkenfeld’s new book weren't yet available.

However, what is known, and what Birkenfeld is freely talking about to media representatives, are some of the key elements of the new edition that weren’t able to be included in his 2016 edition – which, he notes, he'd had to publish himself, because all the mainstream publishers he'd approached feared stepping on the toes of some of the powerful individuals and companies it mentions.

Among the subjects introduced in the UNCENSORED edition are, for example, two private meetings Birkenfeld had recently in London with WikiLeaks founder Julian Assange, at which such topics as Hillary Clinton’s 2009 arranging of a legal settlement between the U.S. government and UBS – in connection with its then-ongoing tax evasion case – months after she had been named Secretary of State, were discussed; and his determined efforts in 2015 to testify  in a French investigation into whether UBS had solicited French citizens in France to open Swiss accounts, the way it had done with Americans during Birkenfeld’s time there.

Birkenfeld’s claims that actor Kevin Costner and cosmetics executive Leonard Lauder had bank accounts with UBS during his time there are also understood to be in the UNCENSORED edition of his book, after having failed to make the first publication. Both Costner and Lauder have repeatedly denied having such accounts. The latest salvo in this ongoing dispute came in April, when Birkenfeld filed suit against them in a Florida district court, seeking damages for "fraud, negligent misrepresentation and intentional interference with advantageous or business relationship". (Birkenfeld has posted a link to the court documents on his website.)

Lucifer's Banker UNCENSORED features an introduction by Peter Schweizer, an American writer who is president of the Government Accountability Institute.

The hardcover edition of Lucifer's Banker UNCENSORED will be available after Sept. 30 from Amazon in the U.S. for US$26.95, plus shipping, with the Kindle edition at US$15.19. Amazon's UK website prices it at £17.99 for the hardcover and £11.09 for the Kindle versions.

Both Amazon sites also carry used copies of the original edition of Lucifer's Banker, starting at US$49.99 and £19.33 respectively.

More information about Birkenfeld and his activities may be found at www.lucifersbanker.com.