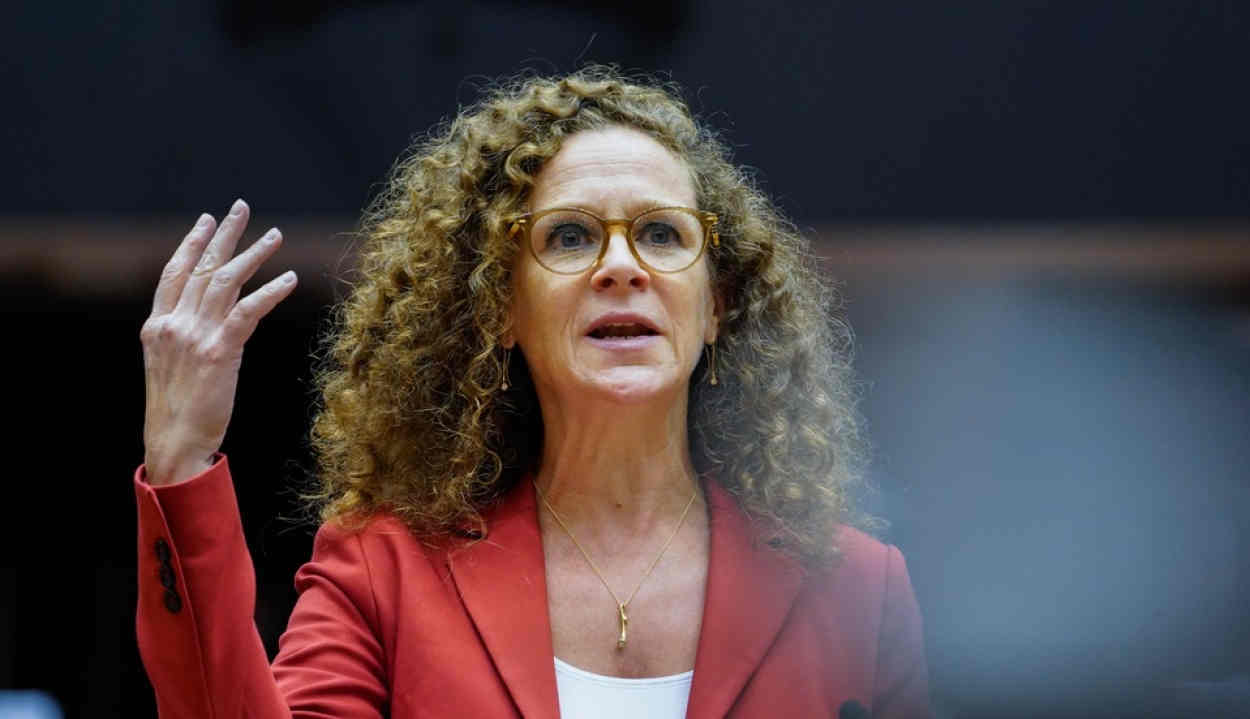 European Parliamentarian Sophie in 't Veld, a champion of Europe's accidental Americans for the last several years, has posted a written question to the European Commission, in an effort to nudge the organization into action on the matter of the difficulties Europe's "accidentals" are continuing to struggle with, particularly with respect to maintaining their bank accounts. 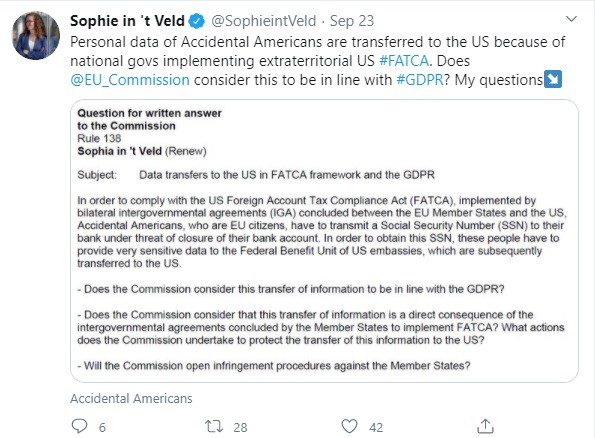 In her question, in 't Veld, who is Dutch, reiterates a question she and others have asked of EU authorities before, as to whether the way banks and other institutions are sending the personal information of EU citizens to the U.S., in order to comply with the U.S. Foreign Account Tax Compliance Act, is in line with Europe's General Data Protection Legislation (GDPR).

The GDPR is a relatively-new (2018) EU law that governs the way the personal data of EU citizens should be transferred.

"In order to comply with the U.S. Foreign Acount Tax Compliance Act (FATCA), implemented by bilateral intergovernmental agreements (IGA) concluded between the EU member states and the U.S., accidental Americans, who are EU citizens, have to transmit a Social Security Number (SSN) to their bank under threat of closure of their bank account," in 't Veld wrote in her question, which was tabled last Tuesday, according to her office.

"In order to obtain this SSN, these people have to provide very sensitive data to the Federal Benefit Unit of U.S. embassies, which are subsequently transferred to the U.S.

"Does the [European] Commission consider this transfer of information to be in line with the GDPR?"

In 't Veld concludes her question by asking whether the European Commission planned to "open infringement procedures against the member states" that are facilitating the forwarding of EU citizen data to the U.S. as part of FATCA compliance activities by banks and other entities operating within their borders.

A spokesperson for in 't Veld's office said she hadn't yet received a response, but that responses to such questions can tak "some weeks to months" to materialize.

In a prepared statement explaining the reasoning behind her written question – the most recent in a series of such questions she's asked – in 't Veld said:

"After repeated calls from [the] European Parliament to the Commission and Council, there has still not been any meaningful action to protect the rights and interests of Accidental Americans, who are EU citizens.

"Accidental Americans are increasingly threatened with closure of their bank account.

"In order to obtain the Social Security Number to provide to the bank, they have to provide very sensitive data to the U.S. embassies, which are then transferred to the U.S. I would like to know from the Commission if it considers this practice to be in line with European data protection law, and whether this practice is a consequence of the intergovernmental agreements between European countries and the U.S. to implement FATCA.

"How are these data transfers protected?

"It is high time that the European Commission and national governments put the rights and interests of EU citizens before international relations with the U.S.!"

In focusing on the data protection issues involved in complying with the U.S. Foreign Account Tax Compliance Act (FATCA), in 't Veld is referencing a July European Court of Justice (ECJ) ruling  that struck down the so-called Privacy Shield, the main mechanism used by the EU to protect the personal data of EU citizens when it's transferred to the U.S.

Int 't Veld has emerged as one of the most articulate and outspoken politicians anywhere, not just in Europe, on behalf of accidental Americans.

Some would say she has had to be, because Dutch banks have been among the world’s most fastidious about complying with FATCA, with the result that many Dutch accidentals have been told that they wouldn't be permitted to keep their bank accounts unless they provided the U.S. taxpayer information the banks insist they need – which some, having spent most of their lives outside of the U.S., don't have, and are reluctant to get, as it would require them to engage with the U.S. tax authorities.

Last year, for example, in 't Veld wrote to then head of the European Commission for Economic and Financial Affairs Pierre Moscovici to urge him to "[start] taking [the problems that Accidental Americans are facing in Europe because of FATCA] seriously,” and “stops hiding behind excuses". Last November, she appeared at a hearing in on "FATCA and its extraterritorial impact on EU citizens" that was sponsored by the European Parliament's Petitions Committee (PETI) in Brussels. Even though she wasn't one of the official speakers at the event, she spoke passionately during one of two Q-and-A sessions, then went on to draw applause from the room when she referred in passing to how "the European Commission and most of the [EU] member state governments put transatlantic relations over the interests of EU citizens".

In April of this year, she fired off a letter to  Moscovici's successor, Paolo Gentiloni, in which she criticized his response to a question posed by another MEP a few months earlier, also on the subject of accidental Americans.

(As reported, Gentiloni had said in his response that, having "examined the alleged infringements" of the "accidentals'" rights to have a basic bank account – as a result of the way EU banks are obliged to treat such clients under the existing laws setting out their role in implementing a 2010 American anti-tax evasion law known as FATCA – the commission had found "no evidence of the existence of [any] infringement".)

Fabien Lehagre, a Paris-based accidental American who has probably done more to put the cause of "accidentals" on the EU's agenda than anyone, with his creation of the Accidental Americans Association (Association des Américains Accidentels, or AAA) in 2015, told the American Expat Financial News Journal that in 't Veld was right to call attention to the data security problems FATCA presents European governments.

"With the information that we accidental Americans have to provide to the U.S. tax authorities to obtain a Social Security Number, hackers have all the material to usurp our identity. So the questions put to the European Commission by the MEP are very pertinent, and I can't wait to see what the Commission's response will be."