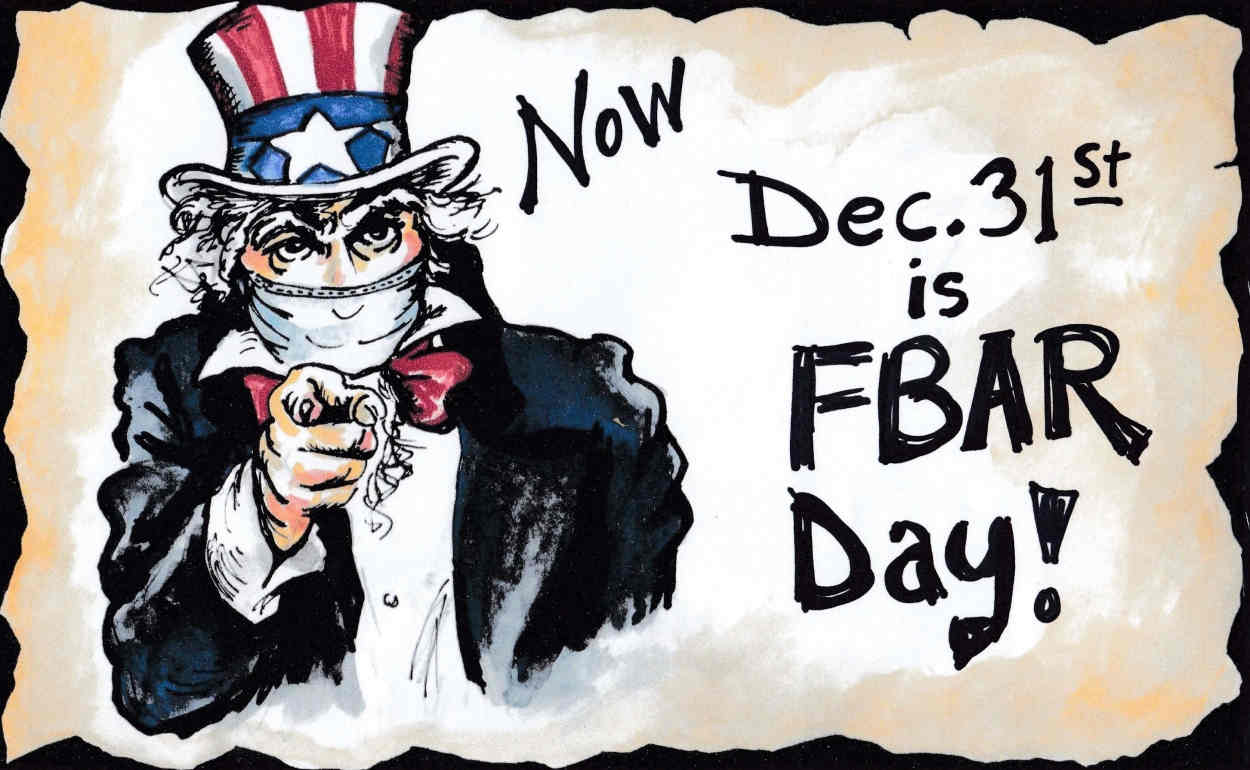 Editor's note: The news about the date when FBARs for the year ending on Dec. 31, 2019 are due has changed.
Please see our most recent report on this subject.

As of yesterday, though, FBAR Day has been pushed back to Dec. 31, 2020, according to a notice posted on the website of the Financial Crimes Enforcement Network, which oversees FBARs, (even though the IRS handles tax returns)....

What is an FBAR?

If you're an expatriate American, and you have a bank account outside of the U.S., this is something you definitely should know about, tax experts will tell you. And they will do so in no uncertain terms...

That's because the penalties for failing to file FBARs – "Foreign Bank Account Reports" – can be particularly harsh, as this publication and others have noted on occasion.

Potentially equivalent to 100% of the highest amount held in a U.S. taxpayer's foreign financial account, in fact, if they're found to have been "wilful" in their failure to comply with the rules.

As we reported here in May, for example, a U.S. taxpayer in Florida was hit with almost US$13m in FBAR penalties. The title for the largest FBAR penalty ever, though, is still believed to be held by a University of Rochester, New York professor named Dan Horsky, who was hit with a US$100m assessment in 2016, before he was sentenced in February 2017 to seven months in prison for a tax evasion scheme that was said to have relied on Swiss bank accounts.

But as FBAR penalty-watchers would tell you, a couple by the last name of Burga could well end up with the much-dreaded title soon, depending on the outcome of a court case currently underway in California. Here, the IRS is said to be seeking a record US$119.6m in FBAR penalties, having to do with money held in some 294 foreign bank accounts in various countries between 2004 and 2009, according to reports.

David Treitel, founder of the London-based American Tax Returns Ltd firm, says the recent run of eye-watering FBAR penalty stories is a “stonkingly scary” reminder to U.S. expats not only of the importance in making sure they file FBARs every year, but of making scrupulously sure that they’re correct.

What's more, "a common misconception with FBAR filing is that a single foreign financial account has to have over US$10,000 in it before it should be reported," says Katelynn Minnott, managing CPA and partner of Bright!Tax, an online provider of U.S. tax advice and services for expatriate Americans around the world.

"But in fact, the US$10,000 minimum value refers to the combined balances of all the foreign financial accounts of the taxpayer, including any accounts that they have signatory authority over even if they're not registered in their own name, such as a business bank account."

Officially FBARs are due on April 15, to coincide with Tax Day in the U.S. (Expats, of course, have until June 15 to file their tax returns.)

Expats who miss that April 15 date have an automatic extension until Oct. 15 to file their FBARS. (In other words, until this Thursday...except, of course, now it's Dec. 15.)

For an extension to file their tax returns, on the other hand, Minnott says, expats  would have had "to apply for an extension until October 15th, by filing a Form 4868".

Important to remember is that if a taxpayer is likely to owe tax when they do finally file, that tax would need to be paid by April 15 – even if it's an estimated amount –otherwise interest will be due.  (There are no taxes connected with FBARs, as it's not a reporting of income, but of bank account totals; the trick is to avoid getting hit with the penalities that are slapped on taxpayers found to have failed to report.)

Further advice typically given by tax experts to expats is to make sure that in addition to telling Uncle Sam about their non-U.S. bank accounts, they report on all of their "worldwide income", including from non-U.S. bank accounts, trusts, etc., usually on a "Schedule B" that taxpayers attach to their tax returns, as well as a Form 8938 ("Statement of Specified Foreign Financial Assets").

The reason FBARs are also known as FinCEN Report 114s, by the way, is because, as mentioned above, they're filed with the Financial Crimes Enforcement Network, aka "FinCEN", and the forms required are numbered "114".

The Foreign Bank Account Report was formally created by Congress and signed into law by President Richard Nixon in 1970, as part of the so-called Bank Secrecy Act, which was aimed at detecting and preventing money-laundering. It was thus one of the first in a series of U.S. laws that Congress has introduced in recent years, in an effort to crack down on the use by American individuals and companies of non-U.S. financial institutions to hide their wealth, and thus avoid their U.S. tax obligations.

Many expats weren't aware of their FBAR obligations, however, until sometime after 2010, when the Foreign Account Tax Compliance Act was signed into law, and began compelling non-U.S. banks and institutions to tell the IRS about any accounts they held on behalf of American citizens and Green Card holders.

The ignorance of expatriate Americans about their FBAR-filing requirements is due to the fact that they typically aren't aware of them, or if they are, they don't realize that the local banks they're using for their day-to-day banking activities are considered to be the kind that they're supposed to report, according to John Richardson, a Toronto-based lawyer who specializes in expatriate issues.

Many of the Homeland Americans who are getting hit with massive FBAR penalties, meanwhile, are elderly, he adds.

"These are often not sophisticated people," he explains, noting that some would have inherited the overseas acounts they hold from foreign or foreign-resident relatives, and that for this reason, it ought to be obvious that they weren't trying actively to hide them.

According to Richardson, a little-recognized feature of the FBAR is that the minimum required to trigger an FBAR filing obligation when the law was introduced fifty years ago – US$10,000 – is significantly less, as a result of inflation, today. As a result, "it's safe to say that almost all expats have an FBAR filing obligation, or at least, if they're not sure, they need to check," he says.

Meanwhile – and eyebrow-raisingly, some would say, even though the minimum amount required to trigger an FBAR-filing requirement hasn't been raised at all over the past 50 years in response to inflation – the penalties levied against those who are found to have failed to file such FBAR reports have been increased, Richardson points out. What's more, as he noted in a blog a few years back, inflation was the reason lawmakers cited for doing it.

It happened as a result of the 2015 “Bipartisan Budget Act”, when a “mandatory increase in federal penalties…to be tied to inflation” was deemed an acceptable way for the government to obtain revenue it needed to balance the Federal budget, according to Richardson.

He, though, regards this selective way of adjusting the then-45-year-old law to account for inflation as "a classic example of how Congress views its expat population, in addition to reflecting the increasingly persecutory aspect of America’s regulatory culture".

On June 29, in  a case that's being seen as setting a new precedent, the U.S. District Court for the Eastern District of Texas ruled that the penalty for so-called "non-willful" FBAR violations should be calculated on a "per-FBAR," rather than per account, basis.

As reported, the fact that this clarification had never been made previously, given that FBARs have been around for 50 years, seemed surprising to some, but it was nonetheless welcomed by tax practitioners and their clients. What it means is that, going forward, "non-willful FBAR violations" will be seen to relate to each FBAR form "not timely or properly filed" rather than to every foreign financial account maintained but not reported" in a timely or proper manner, to paraphrase the defendant's contention in the matter (United States v. Alexandru Bittner).

"A major win for taxpayers," is how Frank Agostino, founder and president of Agostino & Associates PC, of Hackensack, New Jersey – and a former IRS attorney himself – characterized the ruling.

Not enough FBARs being filed

While the amount required to trigger an FBAR filing requirement may be relatively low compared with what it was in 1970, meanwhile, one of the concerns of many tax industry experts today is not just the size of FBAR penalties that are coming before the courts, but the fact that a significant number of Americans are apparently not filing FBARs, in spite of such potentially ruinous penalties.

According to that report –  which revealed a range of issues resulting from the 2010 law known formally as the Foreign Account Tax Compliance Act, and which was seen to have contributed to a “nearly 178% increase in the rate of citizenship renunciations between 2011 and 2016" – only some 949,510 individuals filed FBARS in 2016.

Size of awards leading
to questions about
8th Amendment rights

The vast size of recent FBAR awards has seen a growing number of observers, including prominent tax industry practitioners and commentators, to question whether such large penalties are in fact unconstitutional, on grounds that they violate the Eighth Amendment to the U.S. Constitution, which prohibits the federal government from imposing excessively large fines or other punishments.

Some tax experts think this is a disingenuous argument by those who attempt to use it, noting that those with the huge penalties tend to be, as one U.S. tax expert put it, "the bad actors with pretty egregious cases", who attempted to "play" but failed to win "the audit lottery".

Isac Schwarzenbaum, as the Florida taxpayer who was hit with US$13m FBAR penalty earlier this year is known as, himself had in fact tried to argue in his defense that he was being expected to pay an “unconstitutionally” large fine. The court, however, ruled that the FBAR penalty in question wasn’t a penalty at all, but in fact had a “remedial” purpose, which was necessary to compensate the government for its costs in policing the FBAR universe.

Treitel believes this way of thinking, on the part of the U.S. authorities, is only likely to increase.

“It seems inevitable that we’ll see the IRS starting to use more of the data it's collecting through FATCA to find more and more undisclosed offshore accounts, and assessing ever-larger penalties when it does,” he noted.

Ross McGill, the founder and chairman of Hampshire, England-based tax and regulatory specialists TConsult – and an author of ten books on regulatory compliance, anti-tax evasion frameworks and related topics – agreed, adding that the "eye-watering amounts of money being spent by all governments on propping up COVID 19-hit economies" would inevitably see an "explosion in the number of such cases in the next few years, as the [Automatic Exchange of Information] and FATCA frameworks begin to bear fruit, and the moral case against tax evasion gathers strength."

Two IRS website pages worth checking out are here, and here.

To read some of the stories we've run on the topic of FBARs recently, click here.