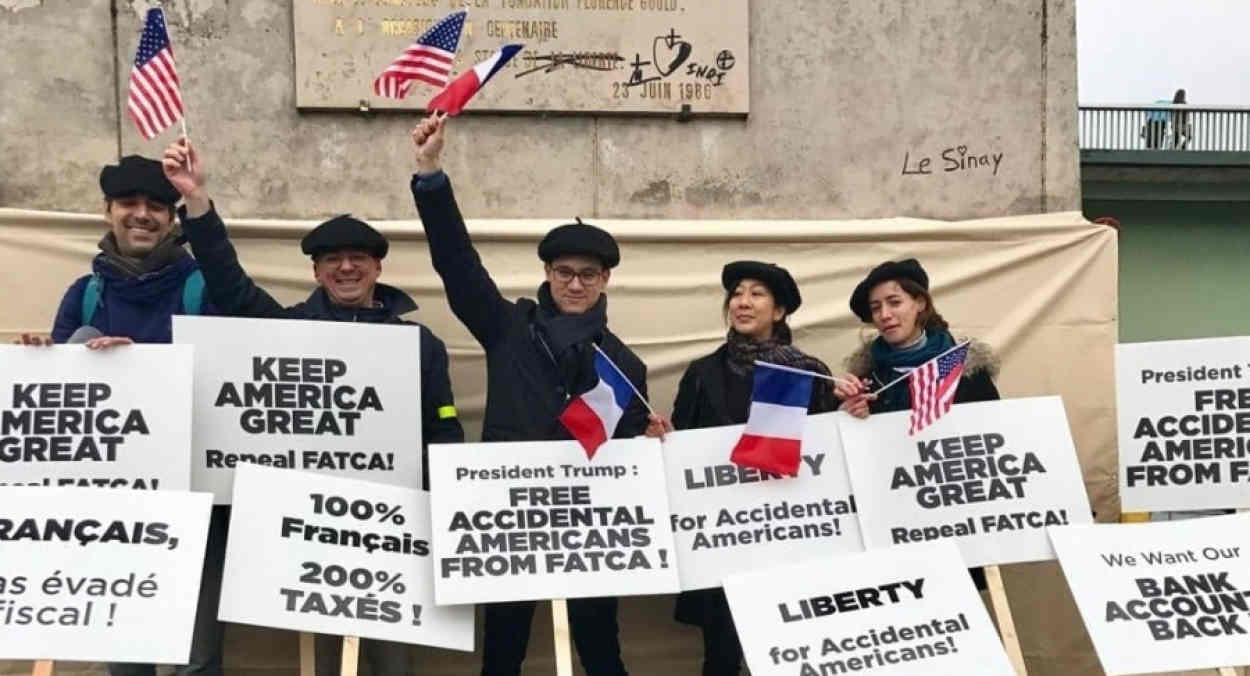 The White House said the president’s visit to the American cemetery at Belleau, outside of Paris, had been “cancelled due to scheduling and logistical difficulties caused by the weather”, and that other White House staff would attend in his place, as the event was going ahead as scheduled.

Back on the Île aux Cygnes yesterday, more than 150 members of the Paris-based Accidental Americans Association and their supporters also went ahead with their event, which had been organized to call the president's attention (and that of others, including the world's media) to the plight of an estimated 10,000 French citizens who, mainly because they had been born to French parents who had been in the U.S. only briefly many decades ago, are still deemed by the U.S. to be American citizens. As a result, because of the United States' unique "citizenship-based tax" (CBT) regime, these "accidentals" have lifelong U.S. tax reporting and potential tax payment obligations, which many object to.

Fabien Lehagre, president of the AAA (pictured above, center), had written to Trump on Sept. 30, inviting him to meet with his members on Saturday so that they could “explain [to him] more about the problems we have faced since FATCA [Foreign Account Tax Compliance Act] became law, and why it was “threatens the ability of overseas Americans to lead normal lives”.

The meeting,  Lehagre told Trump in his letter, would take place on the eleventh of November "at the foot of the Statue of Liberty" on the Isle of Swans, a reference to a scale replica of the Statue of Liberty in New York Harbor that was donated to Paris by that city's American expatriate community in the 1880s, to mark the anniversary of the French Revolution.

On Saturday, Lehagre reiterated the reasons that he and other “accidentals” should be allowed to walk away from their U.S. citizenships without going through the currently expensive and time-consuming expatriation procedure that is now required, pointing out that such accidentals “take no advantage of the benefits the U.S. offers, do not hold U.S. passports in most cases, often speak no English.”

Yet in spite of this – as well as the fact that most also had been born in the U.S. “to non-American parents, and have no intention of returning [to the U.S.]” – under the current expatriation regime these accidentals can stand to “lose their life savings in back taxes and fines before they can give up their citizenship,” Lehagre noted, in a statement detailing the AAA's views.

Lehagre, 33, has launched and supported a number of high-profile initiatives in the three years since he created the AAA, and in the process, has helped to mobilise other accidental Americans not only in France but across the European Union, of whom there are estimated to be more than 300,000.

In July, as reported, the European Parliament responded to this increasingly vocal minority by unanimously approved a resolution supporting their cause. Meeting in Strasbourg, the European lawmakers voted by a resounding 470 votes to 43, with 26 abstentions, to a resolution which supported the accidental Americans' argument that they should be allowed to cast off their American citizenship (and thus their taxation by the U.S.) more easily and cheaply than is currently possible under U.S. law.

Yesterday, Lehagre vowed that campaigning on behalf of “more [such] initiatives” would follow if the situation affecting him and his fellow accidental isn’t changed, including a planned “complaint to the French Council of State", which would allege that FATCA "violates European data protection laws and cannot be reciprocated by the U.S., under American data protection laws."

The existing FATCA regime was put into place, he noted, in spite of these “legal hitches” that meant that reciprocity on the part of the U.S. was never going to happen because the U.S. wouldn’t have permitted it, owing to these data protection laws.

If the French Council of State dismisses the AAA complaint, Lehagre says he plans to take their case to the European Court of Human Rights in Strasbourg.

Meantime, the AAA is also planning to file charges against French banks for invasion of privacy and discrimination, because of the fact that many of them refuse to open new accounts for accidental (and non-accidental) Americans, or to sell them financial products that they provide other French citizens and dual nationals.

Yesterday's AAA demonstration was covered by a number of media outlets, including BFM TV, a French news and weather channel, and the online news website of U.S. network NBC.

As reported, Lehagre, on behalf of his organization, was one of the first to welcome a vow by President Trump at the end of October that he intended to seek to terminate the automatic right to U.S. citizenship for children born in the United States to non-citizens. Trump revealed his plan in an interview with Axios, a relatively-new American news website.

While many industry and Washington observers indicated that Trump's plan was unlikely to get very far, and some immigrant advocacy groups were critical of it, Lehagre yesterday reiterated his hopes that Trump would address the issue of forcing U.S. citizenship on the children of foreigners who do not wish to be American.

"We are delighted the president has opened the debate on the acquisition of American citizenship by being born on U.S. soil," Lehagre said.

Yesterday he addressed his fellow accidentals – in French – saying: "We are more than 150 people gathered today at the foot of this replica of the Statue of Liberty.

"Why here? Well, because the original statue in New York was offered to the United States by the French people, as a sign of friendship between our two nations, to celebrate the centenary of the American Declaration of Independence.

"Today, it is up to us to demand our independence, vis-à-vis the United States, vis-à-vis FATCA and citizenship-based taxation – and the French state must help us."

Below: Another image of the AAA demonstrators on the Île aux Cygnes yesterday.