A series of speakers, including four members of the European Parliament, on Tuesday slammed what they said was the European Commission's continued failure to take serious action aimed at addressing the banking and tax problems that thousands of American/EU dual nationals have been struggling with for years – problems that they said are expected to get worse if nothing is done.

The MEPs, from four different EU countries, made their comments during a 36-minute hearing, mostly conducted remotely but overseen from an almost-empty conference room in the EU's Paul-Henri Spaak Building in Brussels (pictured above).

The hearing was a follow-up to a similar event that took place almost exactly a year earlier in Brussels, on the subject of the "extraterritorial impact on EU citizens" of America's Foreign Account Tax Compliance Act, which had been held by the European Parliament's Petitions Committee (PETI).

Like last year's hearing, Tuesday's was in response to a petition filed with the European Parliament in 2016 by a French individual known officially only as "Mr. J.R. (French)".

As was the also case during that earlier PETI hearing, Dutch MEP Sophie in 't Veld, a long-time crusader on behalf of so-called "accidental Americans", delivered one of Tuesday's most powerful testimonies. 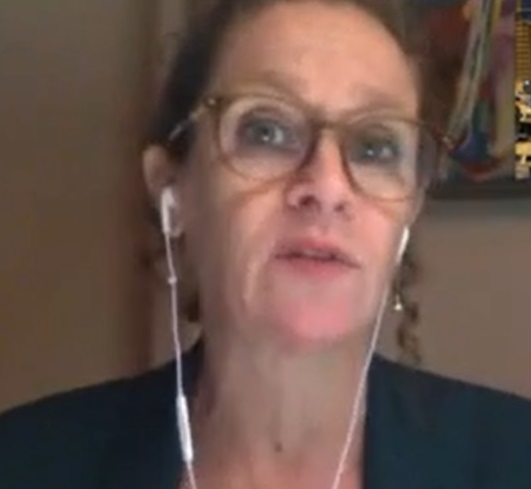 In 't Veld, pictured left, began by saying that while she was "pleased that Parliament have put this [issue] back on the agenda", she was also "actually very annoyed that we still have to talk about it".

Nor was she pleased, she went on, to have to listen "to three representatives of the European Commission basically repeating what they've been telling us for years, saying, 'we know we know, there's nothing we can do. There is no problem, we know nothing', whereas at the moment, there are about, you know, approximately 500,000 accidental Americans [across Europe] who may lose their bank accounts.

"For the time being, it's only happening in some countries, but eventually it will spread [across Europe].

And it's simply not good enough for the European Commission to say, 'You know, it's not our responsibility'."

Among the actions in 't Veld said she was keen to see taken would be the creation, by the European Commission, of a centralized  location to which those EU citizens who are struggling with U.S. informational and tax filing demands could send details of their issues, in order to enable EU lawmakers to get a better grip on the problem, and its scale.

She also called on the Commission to seek to engage incoming U.S. president Joe Biden and his administration "soon" in order to initiate talks on the matter, as well as for the member states themselves, their leaders and all the EU national governments to "mobilize...because we are talking here about EU citizens, not American citizens.

"It's about time that the European Commission stands up for [its] citizens, rather than just cozying up to the U.S. administration."

In addition to in 't Veld's comments and those of three other MEPs, testimony was also offered on Tuesday by three senior European Commission officials – Pierre Seailles, Reinhard Biebel and Alisa Vekeman – as well as petitioner J.R. himself.

Mishcon de Reya partner and European data privacy expert Filippo Noseda, who testified at last year's hearing as well, also spoke, echoing many of in 't Veld's observations, and crediting her with her work in unearthing key EU documents.

Noseda is currently representing a U.S.-born, UK-resident named Jenny in her data privacy challenge against the UK's HM Revenue & Customs, and has been determinedly fighting to keep FATCA and its various problems in the public eye, as well at the top of lists of topics EU lawmakers are obliged to confront.

As reported, he was among the first to declare that a July 16 European Court of Justice (ECJ) ruling, which struck down the main mechanism used by the EU to protect the personal data of EU citizens when it's transferred to the U.S., would prove to be a "game-changer" with respect to the way European institutions would be permitted to send personal information about their clients across the Atlantic, even though EU governments had, he noted in July, "consistently refused to intervene in the debate about FATCA".

Signed into law in 2010 by President Obama, FATCA was introduced as a means of discouraging Americans from stashing wealth in secret overseas bank accounts in order to hide it from the U.S. tax authorities. It did this by obliging all of the world's "foreign financial institutions", (or "FFIs" as it called them), to report to the IRS on any financial accounts they held on behalf of "American citizens".

Almost immediately, the law began to affect expatriate Americans, including so-called "accidentals", individuals who considered themselves to be citizens of other countries and who, in many cases, had been unaware that the fact that they had been born in the U.S. or had had a U.S. parent meant that the U.S. regarded them as citizens.

U.S. Green Card holders also found themselves swept up in the FATCA net.

For many institutions, the easiest way to deal with the new law was to refuse to accept American citizens as account-holders, a problem that has become worse lately in Europe, as the penalties for failing to comply with the law have increased, a key point in the complaint filed with the European Parliament's Petitions Committee filed by "J.R." that was at issue in Tuesday's hearing (as well as the hearing held last year).

In his testimony on Tuesday, Noseda stressed that a series of documents dating back to 2011 – the year after FATCA was signed into law – revealed that European Commission claims that it had never had any data protection concerns about the legislation, and that it had failed to document any evidence of "any breach of data protection" regulations owing to FATCA, in fact were "false".

"The [European] Commission itself raised, for nine years, issues of data protection," Noseda said, detailing his sources as he spoke, including clips of European politicians speaking on the subject from various hearings.

For his part, PETI petitioner J.R.  noted in his introductory comments that he'd been told his petition "may hold the record" for the longest-running PETI petition to still be open.

"This is not a record that gives me any pride, as in the meantime, issues that accidental Americans face have only gotten worse," he added.

If true, that record is about to be extended, as PETI committee chairperson Dolors Montserrat said, in her closing remarks, that the decision to continue to keep it open had "already been made", along with plans to "discuss this matter further with the Commission and with the German presidency".

"Although the Payment Accounts Directive entitles consumers legally residing in the [European] Union to a payment account with basic features, it does not establish the documentation that shoud be provided in relation to opening or maintaining such bank accounts," Seailles said.

"Commission Services therefore concluded that the fact that dual EU/U.S. nationals, having a bank account within the EU, or wishing to open one, are required to provide a U.S. Tax Identification Number (TIN) does not, per se, breach the Payment Accounts Directive."

He added: "We certainly don't underestimate the difficulties encountered by EU citizens holding U.S. nationality, when trying to open bank accounts in the EU. And we have raised the issue in bilateral exchanges with the U.S. authorities, in order to explore practical solutions for EU citizens and EU financial institutions."

But the U.S. has responded, he went on, by "publishing relevant FAQs on the implications for banks not reporting U.S. Tax Identification Numbers...[and introducing] a new 'procedure' that facilitates, in certain cases, [the comining into tax compliance] by dual U.S. citizens who relinquish their U.S. citizenship."

At the time these measures were introduced,FATCA critics said they could help some individuals but fell far short of what was needed, particularly as the clock ticks on a U.S. deadline for non-U.S. financial institutions to fully comply with FATCA, with the threat of significant penalties for those found not to.

To view and listen to the PETI hearing, which is on the European Parliament's website, click here. [The part of the hearing that has to do with the "extraterritorial effect of U.S. laws in the EU" is a little more than halfway through this online recording, or at around the 17:46-minute point. English-speakers may need to select that language by clicking on a box in the lower right-hand corner of the screen, which probably says "FR" rather than "EN".]

Mishcon de Reya has also posted something about Noseda's testimony on its website, which may be viewed by clicking here.