Rome, a city long loved by expats in the past for its beauty, history and culture

Once again, expats surveyed by InterNations, a Munich-based global expat organization, have included on their annual list of the "worst cities to move to" such traditional havens of expatriate lore as Rome, Paris, Hong Kong and Dublin.

Great news, in other words, for those in the business of teaching Spanish, and publishing English-Spanish dictionaries.

Or possibly not... as InterNations points out, in an 11-page summary of its latest findings, the survey was carried out in March of this year, "just before Covid-19 turned into a global pandemic". This, it noted, leaves unanswered the rather significant question, which is how, if at all, the findings would differ if the survey were to be carried out now.

A number of countries, for example, including Kuwait and the City-State of Singapore, have recently sought to address perceived social and financial imbalances by announcing new restrictions on foreigners who may come to live and work within their borders.

One of the Gulf region's main English-language publications, Arabian Business, thought this could be one of the reasons expats in Salmiya were down on the city. In an article headed "Welcome to Salmiya, the Kuwait city so unloved by its expat population", the article noted that "although the [InterNations] survey did not specify, the difficulty [expats in Salmiya say they have] in getting settled could be connected to a long-running campaign to cut the number of expats in Kuwait, culminating last month when Kuwait’s parliament unanimously approved a law giving the government a year to set in motion plans to redress the lopsided ratio between foreign residents and citizens."

The Arabian Business tops its article on the InterNations report with a photo of Salmiya, which it notes was ranked bottom of this year's InterNations list of expat-friendly cities "despite boasting an aquarium, a scientific centre, an IMAX movie theatre, shopping malls, a football stadium, medical centres and a well-equipped park", as well as a nearby Gulf Road "coveted for its amazing sea vistas".

Another common feature of some of the jurisdictions on the "Best" list is that their cost of living is relatively low, and their climate on the sunny side.

Both Rome and Paris have been regulars on the InterNations' 'Ten Worst' lists in recent years, but New York, Los Angeles and San Francisco were on last year's list but not this year's.

New to this year's Ten Worst, in addition to Dulin and Hong Kong, were Nairobi, Santiago, Johannesburg, Seoul and Salmiya.

In its summary, InterNations noted that its survey's respondents in Valencia appeared to be "particularly happy with local healthcare and the local climate", while expats in Salmiya – a relatively small (population of less than 250,000) city in Kuwait, which came in at the bottom of this year's listing of 66 world cities –  said they were "not at all happy with their quality of life and the ease of getting settled" in the jurisdiction, which overlooks the Persian Gulf.

According to InterNations, its survey is one of the most extensive surveys of its kind, with its data being compiled from more than 15,000 respondents. The number of cities covered by the survey varies from year to year, with 66 this year, compared to 82 last year. The survey asks "in-depth questions" of its respondents on five areas of expatriate life: Quality of Urban Living, Getting Settled, Urban Work Life, Finance & Housing, and Local Cost of Living.

As for why expats gave the thumbs down to Rome -- the city known for having given the world the expression "la dolce vita" (the sweet life), the InterNations report says: "Rome comes in last place worldwide in the Urban Work Life Index (66th), with only 8% of survey respondents rating their local career options positively (vs. 43% globally).

"More than three in five respondents (62%) are also concerned about the economy in the Italian capital (62% vs 16% globally), and 30% are unhappy with their work-life balance (vs. 18% globally).

“I do not like the work-life balance and may have to consider moving away from Italy for work,” one Canadian expat is quoted as saying. “On top of this, the weak
economy makes career advancements difficult.”

Paris, meanwhile, is described as having performed "especially poorly in the Finance & Housing Index (62nd)", while about three in ten of the Paris-based expats who participated in the survey (29%) said they were "dissatisfied with their [personal] financial situation", a figure that InterNations said compared with around 21% globally.

Expats living in Paris scored the city more highly in the "Urban Work Life" category, where their ranking placed it in 32nd place out of the 66 cities included in the survey.

Fifty-nine percent said they were happy with the career opportunities available to them in Paris, vs. 43% globally, while two in three of those surveyed rated the Paris economy positively, slightly above the global average of 63%.

Said one U.S. expat who participated in the survey: "My job is fantastic, and I like the employee rights, as well as the relaxed work environment, in France."

On the downside, 40% of the expats surveyed said Parisians were "not friendly", while more than half, or 56%, said it's "difficult to make new friends in Paris (vs. 33% globally).

Perhaps not surprisingly, given the recent turmoil in Hong Kong, expats who live there ranked it at what turned out to be the bottom of cities globally in terms of political stability: 69% of expats told the InterNations' pollsters that they were "worried about this" compared with just 17% on average, globally.

Hong Kong also scores poorly in terms of the "work-life balance subcategory", with "more than one in three expats in Hong Kong (34%) unhappy with their working hours, twice the global average [of] 17%", while "more than nine in ten expats (94%) find housing in Hong Kong unaffordable, vs. 41% globally".

"In fact, 80% of expats in Hong Kong are unhappy with the local cost of living, compared to just 36% of survey respondents worldwide."

To read about last year's InterNation's survey of the best and worst cities in the world for expats, click here. 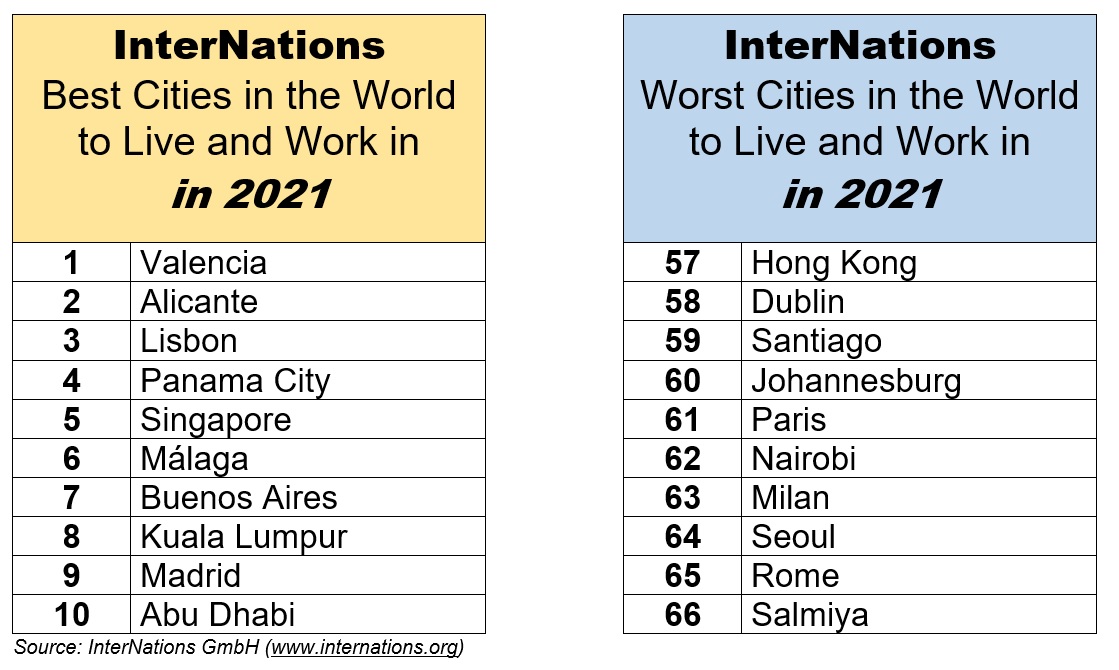