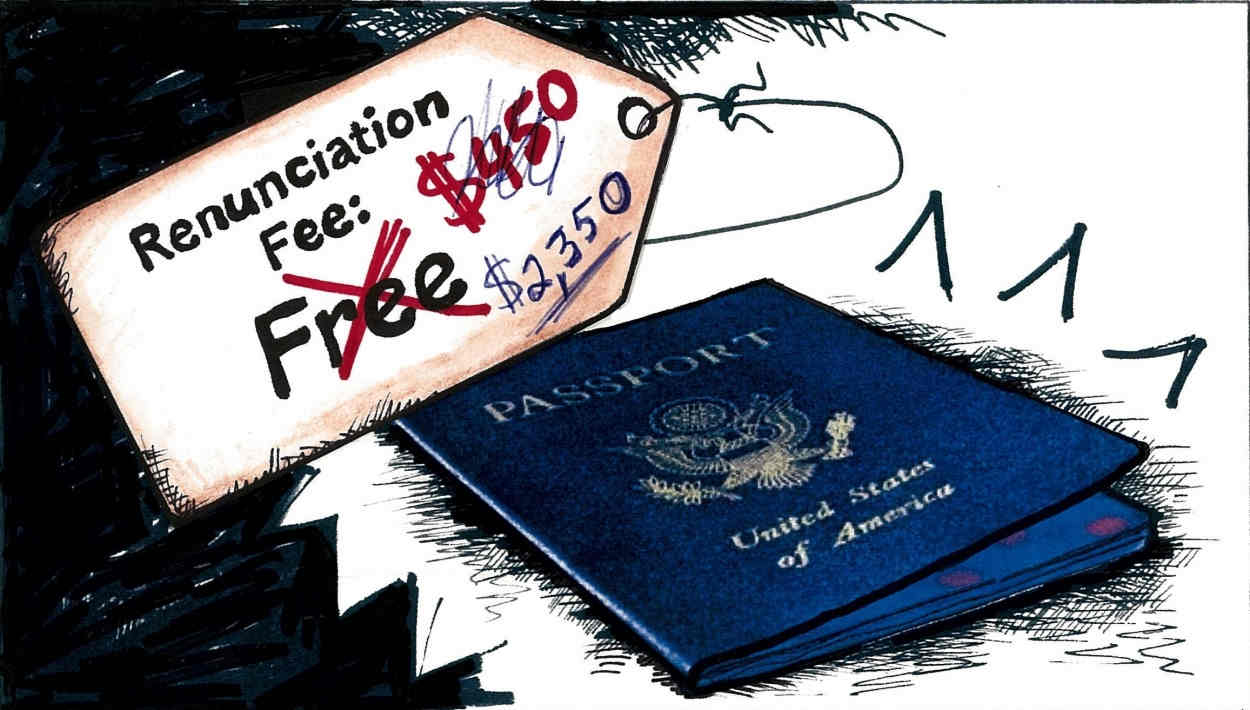 The Paris-based Association of Accidental Americans (AAA), along with 20 so-called accidental Americans of 10 different nationalities, have filed a complaint in U.S. District Court in Washington against the U.S. State Department today, in which they allege that the US$2,350 fee the U.S. currently charges those wishing to renounce their American citizenship violates the U.S. Constitution and international law.

In their complaint, the plaintiffs argue that the right of an individual to renounce their U.S. citizenship "is a fundamental, constitutional, natural and inherent right under the U.S. Constitution," according to a summary of the claim, which was released to the media this morning.

The State Department’s fee, the claim summary adds, is “essentially forcing U.S. citizens to remain U.S. citizens against their will."

"Accidental Americans" is a term widely given to individuals who may have been born in the U.S. to non-American parents who left soon afterwards, or born abroad to one or more American parents and who may therefore never set foot on American soil at all.

The U.S. didn't used to charge citizens to give up their citizenships, only introducing a fee, of US$450, in 2010. This was increased fivefold in 2014, however, to the current US$2,350 (€1,945, £1,765), which was explained at the time as being necessary to cover the increased costs of handling such renunciations.

Because this increase coincided with a significant increase in the numbers of those giving up their citizenships – as Americans permanently resident overseas began to react to increased tax filing and tax paying demands being made on them in the wake of President Obama's 2010 tax-evasion prevention law known as FATCA – the hike in the renunciation fee was viewed by some as a U.S. government strategy to extract as much as possible from those heading for the citizenship exit door.

For 200 years prior to 2010, U.S. nationals could renounce their citizenship free of charge, the plaintiffs point out, in their summary of their complaint.

Today's action against the U.S. State Department is the AAA's first legal action in the U.S., but the latest in a series of similar cases it's brought in Europe since it was founded in 2017 by Fabien Lehagre, pictured left, a California-born accidental whose French father brought him back to France at the age of 18 months. The AAA currently has some 1,180 members.

As reported, the AAA filed a complaint against France last year with the European Commission, alleging that the country was infringing European data protection and privacy law, after having filed lawsuits earlier in the year against a number of online banks in France for discriminating against Franco-American dual nationals by refusing to open bank accounts for them because of their U.S. citizenship status.

The AAA also challenged the French government's implementation of FATCA, on behalf of the U.S., violated the privacy of dual French/American citizens, but lost the case in July 2019, after France's Conseil d'Etat ruled that the law could stand and didn't need changing or to be scrapped.

Lehagre announced the AAA's plans to launch a crowd-funded legal challenge to the renunciation fee in August, and within less than a month, said the crowd-funding target of €20,000 had been met.

Since then, he has been seeking accidental Americans from as many different countries as possible to join him in the case, as co-plaintiffs, with the result that the names of 19 other accidentals from a total of 10 different countries are listed alongside his name, and that of the l’Association des Américains Accidentels, as plaintiffs.

In the press summary of their 66-page complaint, Lehagre and his fellow plaintiffs argue that the State Department's fee "violates not only the Due Process clause of the Fifth Amendment of the U.S. Constitution, but also the First Amendment, guaranteeing freedom of expression, and the Eighth Amendment, precluding excessive fines to punish individuals wishing to sever all connection with the U.S."

They also note that the fee violates the U.S. Administrative Procedure Act, as well as international law.

Summarizing the reasons accidental Americans often feel particularly agrieved, Lehagre points out that the U.S. is the only country besides Eritrea that taxes on the basis of citizenship, which is itself a fact of American expatriate life that many expats struggle with. What's more, this fact has only emerged into mainstream consciousness over the decade since FATCA was introduced – previously, American expats, particularly those who left the U.S. as children or young adults, have often been unaware that they were still regarded as American taxpayers, and expected to file tax returns every year.

This is why tens of thousands of "accidental Americans" around the world are only now learning about their U.S. tax reporting obligations, typically, since January of this year, when their banks have informed them that they will lose their bank accounts unless they are able to provide the bank with a Tax Information Number, such as a Social Security number, which few of them have.

In addition to bank accounts, such accidentals are facing the inability to take out or maintain mortgages, life insurance and start-up loans in their home countries, according to Lehagre, while potentially getting hit with financial penalties and the obligation to pay back taxes for their years of alleged non-compliance with U.S. tax laws.

The exact number of such accidentals is unknown, but there are estimated to be more than 300,000 in Europe, of which French banking industry officials have said around 40,000 are thought to live in France, and thus are at risk of losing their bank accounts.

Representing Lehagre and his fellow plaintiffs is Zell & Associates International Advocates, LLC, a law firm based in Israel.

Marc Zell, who is handling the case with his Zell & Associates colleague Noam Schreiber, said it was "unprecedented in terms of the issues raised."

He added: "There is scarce case law specifically dealing with the right of expatriation as a fundamental right protected by the U.S. Constitution.  There are, however, ample precedents, including Congressional legislation dating from the 19th century, that specifically refer to the right to expatriate as a fundamental natural right.  There is also scholarly commentary to this effect."

As the complaint notes in its introduction, Thomas Jefferson described expatriation as a "natural right which all men have," in a 1779 document entitled "A Bill Declaring Who Shall Be Deemed Citizens of This Commonwealth".

More in this category: « Webinar: Estate planning opportunities, considerations for HNW individuals in the post-election, post-coronavirus age' Bloomberg again speaks out on behalf of expats, with 'A Letter to Janet Yellen' »