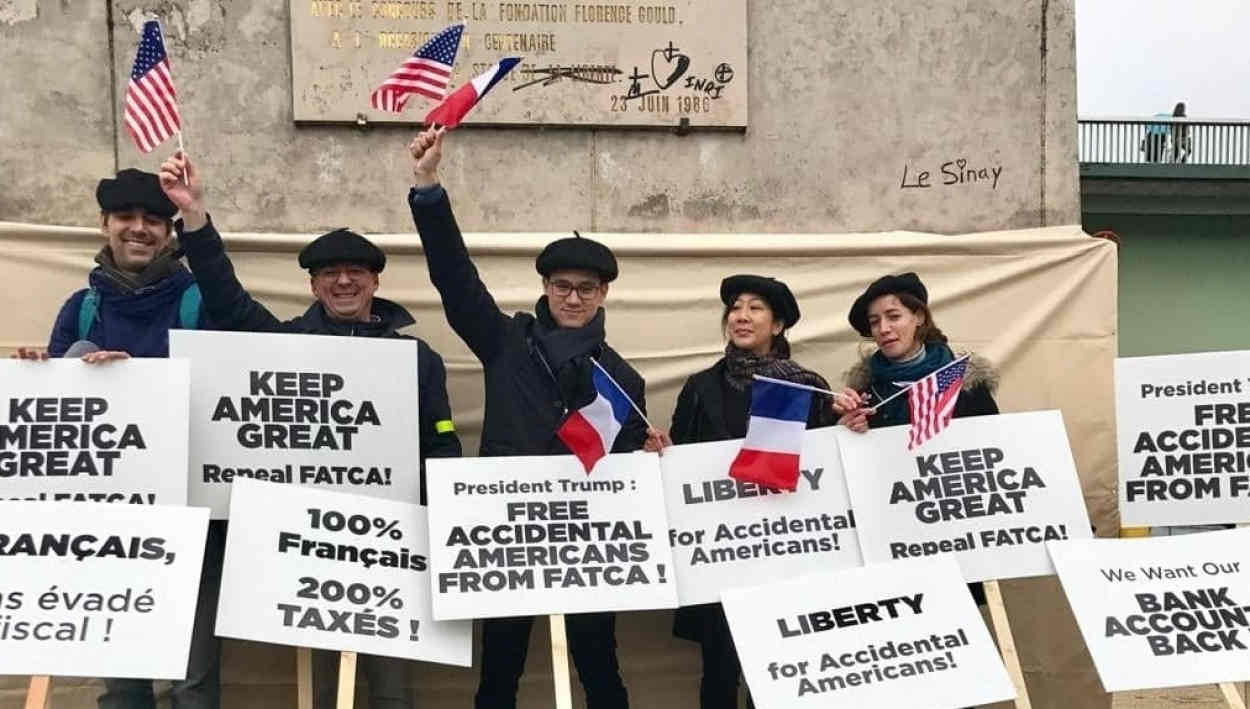 Association of Accidental Americans demonstration in Paris in 2018

The 2,000-word story is headlined "Why 'Accidental Americans' Are Desperate to Give Up Their U.S. Citizenship," above a photograph of Association of Accidental Americans' (AAA) founder and president Fabien Lehagre sitting on a sofa next to his lawyer, Patrice Spinosi, and may be viewed online by clicking here.

The Time article comes less than two weeks after Bloomberg published a strongly-worded editorial, "A Letter From 9 Million U.S. Expats to Janet Yellen" that was reprinted by a couple of U.S. news organizations, including the Washington Post. This in turn followed two other relatively recent Bloomberg opinion pieces by the same Bloomberg author, Andreas Kluth, that also forcefully called attention to American expats' plight: "Stop Treating American Expats Like Tax Cheats" on Nov. 26, 2019, a few days before Thanksgiving last year; and "U.S. Expats Can't Renouce their Citizenship Fast Enough"  on Aug. 31 of this year.

In October, the Washington Post coverted the story of the accidentals, in a story headed "How the coronavirus made it nearly impossible to renounce U.S. citizenship", which addressed the specific problem many so-called "accidentals" have been having since the end of last year, when their banks began stressing their need to provide a tax identification number (TIN), usually a Social Security number, or be able to show proof that they had begun proceedings to give up their U.S. citizenship (or had completed the process), if they didn't wish to lose their bank accounts.

In researching her story, Time journalist Vivienne Walt clearly went to considerable lengths to interview a cross-section of accidental Americans as well as lawyers in her efforts to make the complex situation currently facing thousands of "accidentals" around the world understandable.

"Accidental Americans" is, of course, the name given to citizens of other countries around the world who happen also to be considered to be U.S. citizens by the U.S. government. Typically these individuals were born in the U.S. to non-American parents, who returned to their own countries soon after their birth, and spent the rest of their lives assuming they were citizens only of the countries in which they lived.

Such "accidentals" often discovered that they were considered to be American citizens as well only recently, after their bank informed them that, because they were born in the U.S., they are deemed to be American, and therefore it would have to close their accounts within weeks if they didn't provide it with a U.S. "tax identification number," normally a U.S. Social Security number.

This is because in order to comply with FATCA (formally known as the Foreign Account Tax Compliance Act, of 2010), since Jan. 1 of this year, such banks and other non-U.S. financial institutions have been required to provide the U.S. with the "TINs" of all of their American-citizen account-holders.

As Walt explains in her article, "Other than Eritrea, the U.S. is the only country in the world with citizenship tax rules, demanding that all Americans – including anyone born in the U.S. – submit yearly tax filings to the Internal Revenue Service, no matter where they live.

"This year, the U.S. began enforcing those rules in earnest.

"Although the U.S. Treasury temporarily relaxed the rules last year, as the tales of woe mounted, the easing of the regulation ended in January, when the Treasury refused to extend a moritorium against banks that do not send their clients' data to the U.S.

"Despite please from European Union officials, the U.S. refused to reconsider, and beginning on Jan. 1, 2020, threatened to impose fines potentially up to billions of dollars, on foreign banks that do not share their U.S. clients' information."

'Accidental' may 'have to
close' hair salon due to FATCA

The Time article begins by detailing the story of a 53-year-old accidental American in Harkema, the Netherlands, who opened a hair salon there at the age of 21 in 1988, but who now says she may be forced to close it if her bank makes good on its intention of closing her account "by Jan. 1" because of her failure to provide it with a TIN.

Having left the U.S. at the age of 13 months, Annie Brouwer-Hoogsteen never obtained such a tax identification number – but is now being told that because of her U.S. birthplace, she is expected to enter into the U.S. system and file tax returns to a country she hasn't lived in for more than 50 years, and whose language she doesn't even speak, if she wishes to keep her Dutch bank account.

If she loses it, she told Walt, with her husband acting as her translator, her hair salon "cannot buy supplies, we cannot pay three hairdressers, we cannot do anything."

Walt ends her article by detailing the story of retired Dutch KLM pilot Ronald Ariës, 62, who, as reported, reluctantly took his bank (De Volksbank) to court rather than accede to its demands that he obtain a Social Security number. A decision in that case is expected imminently.

Ariës is in danger of losing his home if he fails to resolve the situation, he is quoted as telling Walt.

He added: "What kind of world are we living in?

"Maybe we will go back to the way my dad was paid, in a brown paper bag in cash."

Also quoted in the Time article are Marc Zell, the Israel-based American lawyer who is representing Lehagre's AAA in a crowd-funded lawsuit filed earlier this month in a U.S. District Court in Washington against the State Department, alleging that the US$2,350 fee that the U.S. charges those seeking to renounce their citizenships is illegal and unconstitutional; Lehagre himself; Filippo Noseda, the Mishcon de Reya lawyer who has been involved in a number of legal cases that have challenged the data protection issues allegedly raised by FATCA; and Rob Gerretsen, a  New York-born, Dutch accidental American who is a member of the Nederlandse (Dutch) Accidental Americans group (NLAAA).