Dutch Finance Minister Wopke Hoekstra told a mostly online hearing of the Dutch Parliament on Wednesday that he could once again confirm a Dutch Banking Association (NVB) assurance, revealed earlier this month, that no "accidental Americans" bank accounts in the Netherlands will be closed this year.

"If there are banks that still close accounts, he says he wants to hear of it so that he can have the situation corrected," a spokesperson for the Nederlandse Accidental Americans (NLAA), which was among the groups and individuals who tuned into the hearing, said on Thursday.

Wednesday's hearing was the latest in a series that have taken place in the "Tweede Kamer" over the past two years, as a handful of committed Dutch lawmakers seek to address the FATCA-related banking problems that thousands of Duch "accidentals" are thought to be struggling with, as a result of a combination of the fact that they're technically considered by the U.S. to be American, and thus taxpayers; but who are not yet in the U.S. tax-reporting system, as they lack Taxpayer Identification Numbers, such as Social Security Numbers, and are wary of having to allow themselves to be counted as Americans, as they don't consider themselves to be.

Also on Wednesday, Hoekstra revealed that he anticipated negotiations between the U.S. and the EU, through the EU's Economic and Financial Affairs Council (ECOFIN), aimed at getting a "structural solution" for Europe's accidental Americans, would become more intense. 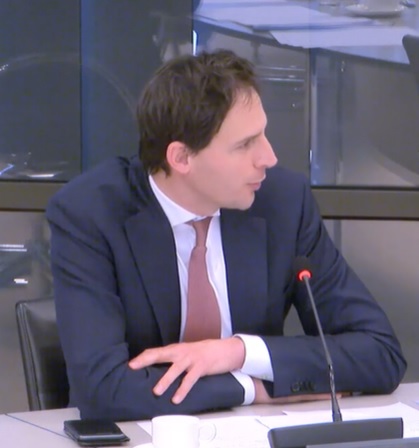 According to sources, Hoekstra, pictured left during the hearing, has a niece who is accidental American, and therefore understands better than most lawmakers the difficulties it causes, particularly with respect to bank and other financial accounts.

During the hearing – which may be viewed here – a number of questions were asked, which Hoekstra said he would reply to "within two months".

He also said he would be submitting progress reports to the Tweede Kamer "in April/May and October/November," one source added.

As reported earlier this month, Hoekstra told his fellow Tweede Kamer lawmakers that he had been assured by Dutch banks that they would not close the accounts of American clients whose valid Tax Identification or Social Security numbers they didn't have, and weren't being given in spite of requests, even though this potentially would cause them to be in violation of the U.S. Foreign Acount Tax Compliance Act.

Hoekstra's assurance, contained in a seven-page letter to Tweede Kamer, was thought to have come as a relief to the dozens of dual American/Dutch citizens who have been warned by such banks as ABN Amrobank, Rabobank and de Volksbank that their accounts would be closed if they failed to provide them with their SSNs or TINs.

The banks have said that they have needed these numbers, or certain other information such as a Certificate of Loss of Nationality (CLN), since last January, in order to comply with new requirements set out by FATCA, which took effect in January 2020.

Reports of Dutch banks suspending and/or threatening to close the accounts of Dutch accidental Americans first emerged in January of last year, following warnings towards the end of 2019 that such account freezings and closures could occur, because of the banks' need to comply with the new FATCA rules.