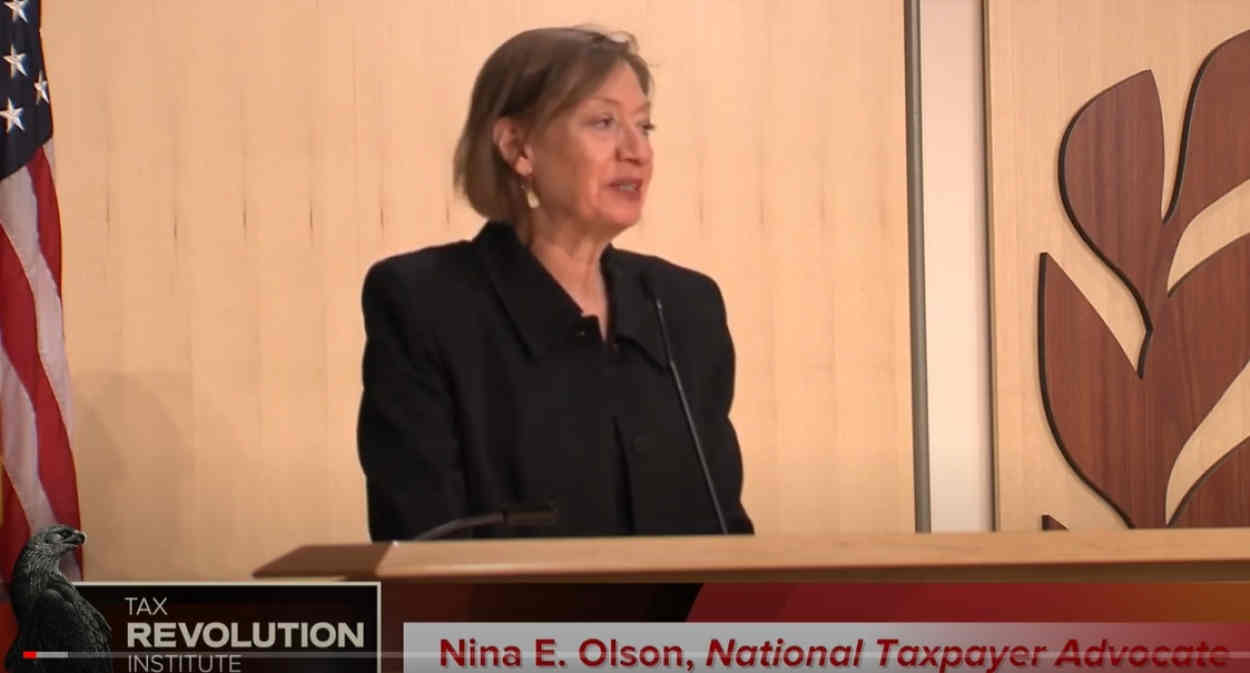 Nina E. Olson, who outspokenly served for more than 18 years as the IRS's National Taxpayer Advocate, will testify tomorrow (May 11) during a U.S. Senate Subcommittee hearing on the subject of "Closing the Tax Gap: Lost Revenue from Non-compliance, and the Role of Offshore Tax Evasion."

Because U.S. government office buildings are still not open to the public owing to ongoing Covid-19 restrictions, the hearing is being livestreamed, and will be available to view free of charge, according to the Senate Finance Committee's website.

The extent to which the hearing is expected to focus on the taxation of individuals, as opposed to corporations, isn't specified in the hearing's literature, and is likely to be determined in large part by the comments of those scheduled to speak.

In addition to Olson, the hearing's other scheduled "witnesses" include Barry Johnson, acting chief and research and analytics officer for the IRS; Doug O’Donnell, deputy commissioner of Services & Enforcement for the IRS; the Honorable J. Russell George, Treasury Inspector General For Tax Administration at the U.S. Treasury; and former IRS commissioner Charles O. Rossotti.

Since retiring from the IRS's National Taxpayer Advocate's office in 2019, Olson (pictured above at an NTA hearing in 2016 hearing), has headed up the Washington, D.C.-based Center for Taxpayer Rights, which she says she founded the day after she retired from  her almost two decades as the IRS's NTA.

As National Taxpayer Advocate, Olson often spoke out forcefully on behalf of American expatriates, particularly with respect to the difficulties they began to have not long after the Foreign Account Tax Compliance Act was signed into law in 2010.

Tomorrow's subcommittee hearing comes at a time when the new administration of President Biden is proposing a raft of tax changes aimed at getting wealthy American individuals and highly-profitable American companies to pay more taxes, in an effort to begin to address the country's huge deficits, which have grown substantially recently as a result of government programs set up in response to the Covid-19 pandemic.

The hearing is set to begin at 2:30pm Washington time (7:30pm UK time, 8:30 Central European Time). For more information and to watch a live video of the hearing, click here.

Individuals and organizations interested in sharing their views on the topic of tax revenue being lost as a result of non-compliance and tax evasion are invited by the subcommittee to submit them "in a Word document... single-spaced... not exceeding 10 pages in length." No other file type will be accepted, the subcommittee says.

Such statements would need to be received no later than two weeks after the hearing, which would be by May 25. They would need to be mailed to This email address is being protected from spambots. You need JavaScript enabled to view it., or mailed – ("not faxed") – to:

Nina Olson was interviewed last November by the American Citizens Abroad. To hear the ACA podcast on YouTube, click here.