While many Americans back home are voluntarily opting out of being vaccinated against the Covid-19 coronavirus, American expats around the world are furiously struggling to obtain the vaccine for themselves and their families. And as they're doing so, many are grumbling about the fact that being U.S. taxpayers, they should have as much right to free and available vaccines as their Homeland counterparts.

Some have been paying to fly back to the U.S. for the jabs, while others have been exploring their options at private medical facilities in the countries in which they live. As reported, the U.S. State Department made the flying-home option easier for some last week, when it said U.S. citizens currently overseas whose passports had expired "on or after Jan. 1, 2020" would be able to use them anyway, "for direct return travel to the U.S.," until the end of the year.

Yesterday, President Biden provided further details about the U.S.'s already-announced plans to "share" 80 million doses "of our vaccine supply with the world", having already "shared more than 4 million doses with Canada and Mexico." Yet again, however, the statement didn't mention any specific allocations for U.S. citizens abroad.

And in the opinion of many in Expatland, while the vaccine donations to desperate countries around the world is obviously the right thing for the U.S. to be doing, Washington's failure to provide for American expats on the vaccine front is, they say, far from acceptable, particularly given that the U.S. did go the trouble of vaccinating all of its embassy and consulate staffers around the world – showing, in other words, they say, that the U.S. government is fully capable of organizing such an undertaking. 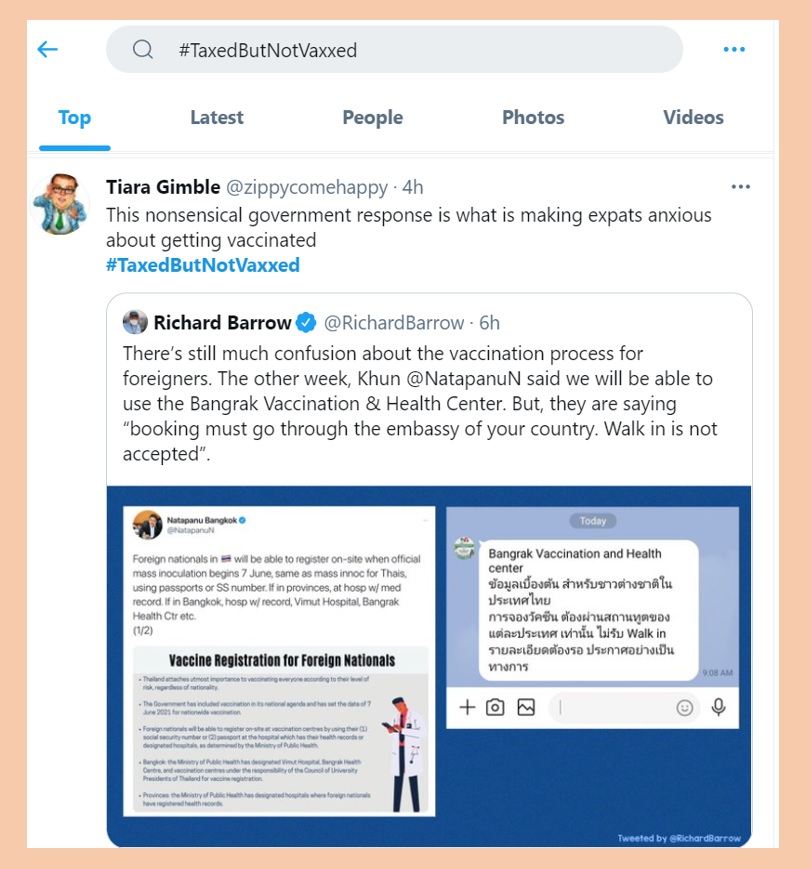 Many have taken to expressing their frustration on social media, using the #TaxedButNotVaxxed hashtag (see tweet, left).

Among those who've been less than impressed have been two former U.S. ambassadors – Michael George DeSombre, U.S. Ambassador to Thailand (2020- Jan. 2021), and Scott Brown, Ambassador to New Zealand and Samoa, (2017 - 2020) – who shared their opinion on May 27 with readers of the Wall Street Journal.

In an article headed "The Americans Who Can't Get Vaccines,"  they said: "It was the right thing for the U.S. government to prioritize vaccinating all people in America, but now that the vaccine supply exceeds demand at home, it is time for Americans abroad to be given their shots."

Picking up on the issue about American expats being taxpayers, unlike expats of most other nationalities, the two former ambassadors added: "Americans living overseas are U.S. taxpayers, and should have the same access to free vaccines funded by their tax dollars.

"There are no significant hurdles for the U.S. government to ship Covid vaccines around the world and administer them to Americans living abroad.

"The State Department confirmed on April 20 that it has sent to each U.S. embassy sufficient vaccines to administer to all American employees."

Furthermore, they went on, "for U.S. citizens, returning home to get vaccinated is difficult.

"Travelling to America, taking two shots three or four weeks apart, then spending two to three weeks in quarantine upon return to Asia could cause the whole process to take up to seven weeks, and thousands of dollars in flights and accommodation.

"That's not a realistic option if you have a full-time job, especially if you have children.

"As ambassadors, our priority was to secure the health and safety of all Americans.

"It is time for the U.S. to offer Covid-19 vaccinations to our fellow citizens living overseas."

That one of the two former ambassadors used to be based in Thailand is possibly not surprising, as the American expat/vaccine battle in that Asian country has made headlines around the world, and has even seen the local Democrats Abroad chapter join forces in the battle with its Republicans Overseas counterparts, as well as local representatives from the Veterans of Foreign Wars and the head of the American Women's Club of Thailand. 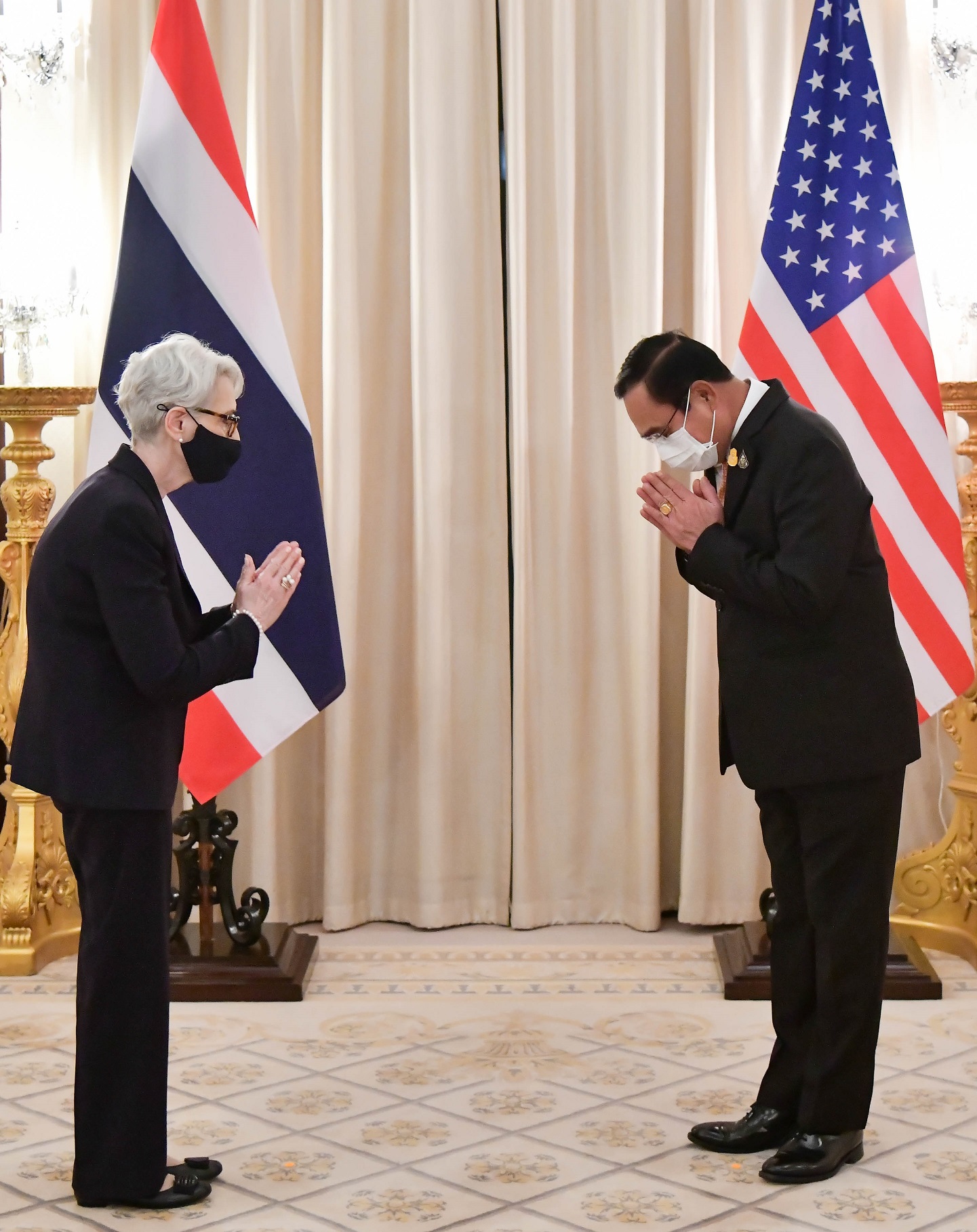 As the Bangkok Post reported earlier this week, this unlikely alliance of American expat groups submitted an open letter to then-visiting U.S. Deputy Secretary of State Wendy Sherman (pictured right, greeting Thailand's prime minister, Prayut Chan-o-cha at Government House on Wednesday), in which they referred to the fact that the U.S. is unique in requiring its citizens to pay taxes regardless of where they live. For this reason, they said, they were asking the U.S. government to get Covid-19 vaccinations to U.S. expats in Thailand ASAP – with the plea, "Don't abandon us!"

Noting that a plan for the U.S. to donate surplus coronavirus vaccine to Thailand was expected to be discussed during the deputy secretary of state's visit, the letter urged "that any agreement include enough donated vaccines to cover all American citizens resident in the Kingdom...

"The Chinese government has agreed to a similar arrangement with Thailand for its citizens, as part of its vaccine donation program."

A statement on the U.S. Embassy in Thailand's website acknowledging Sherman's visit afterwards didn't mention any plans to help American expats in the country obtain the vaccine, however, saying only that the visit represented "an opportunity for both sides to exchange views on defeating the Covid-19 pandemic, deepening security cooperation, increasing trade and investment, and expanding people-to-people ties."

This leaves Americans there – as in certain other countries – with few options, according to an American expat and long-time resident of Bangkok, who requested anonymity.

She noted that Thailand currently has one of the poorest Covid-19 vaccination rates in the world, leaving American expats like her and her husband having to think seriously about flying back to the U.S., as crazily expensive as it sounds – which, she noted, many wealthy Thais are doing. Because even Thailand's many world-class private hospitals and clinics aren't able to reliably obtain vaccines, which tend to be given out on a country-by-country basis, sources say.

The fact that Thailand chose not to join COVAX, a World Health Organization aimed at ensuring global access to Covid-19 vaccines, is seen by some as contributing to the shortage, the American expat noted.

This American expat cited a "Covid-19 Vaccine Tracker" page on the Financial Times's website which shows Thailand currently ranking 113th out of 184 countries tracked on the basis of its vaccination record thus far, with only 3.6% of its residents having had one shot and just 1.6% having had two. Just 5.2 doses of the vaccine have been administered per 100 residents in the country. (On this list, the United Arab Emirates is in first place, with 133.7 doses having been administered; the U.S. is in eleventh place, with 89.5 doses per 100 residents, and 51.4% of the population having had at least one shot.)

"My husband and I have looked into flying to the U.S. to get the vaccine," the American told the American Expat Financial News Journal. "We figure it will cost us around US$10,000, and take six to eight weeks, which means a lot of time away from the office.

"But we can't do it now, as our Thai work permit visas would expire when we were away, so we have to wait until these have been renewed before we can consider it."

Another American expat in Thailand detailed different issues arising with the fly-back-to-America option, in a letter to the New York Times yesterday.

"My husband, now 86, has underlying health conditions," wrote Loran Davidson, who is described as being a resident of Pattaya, a coastal city southeast of Bangkok that's popular with expats.

"Following a recent accident he can hardly walk. Flying to the United States for vaccination is not an option, even if the cost were not already prohibitive for a retiree living on Social Security."

Echoing the former U.S. ambassador to Thailand and other expats, Davidson added: "I urge the Biden administration to quickly make FDA-approved vaccines available to all Americans overseas. We remain subject to the U.S. tax code and we vote in federal elections, but are excluded from the protection offered Americans at home.

"We don’t deserve to be forgotten."

More in this category: « Greenback survey of American expats: Only 15% feel their voices heard 'as well as any other U.S. citizen' ‘Skybound Wealth’ is new brand in U.S. expat advisory space »