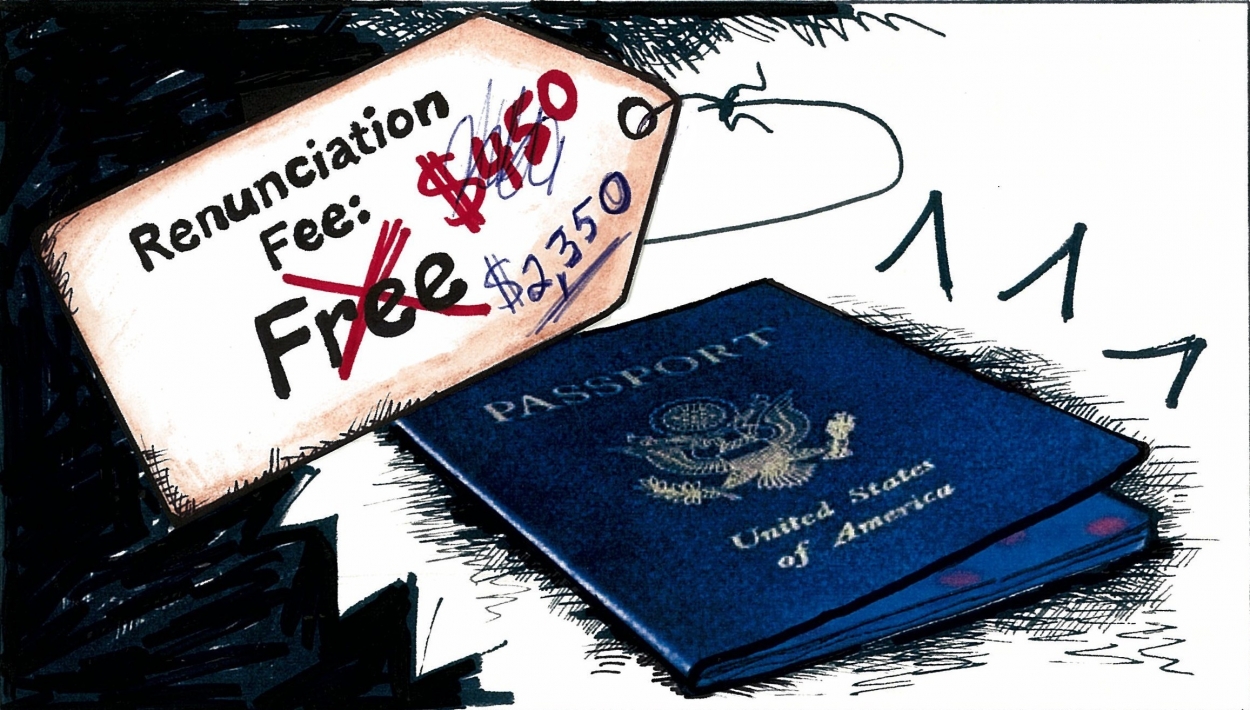 For a second time since April, the U.S. State Department has responded to a legal challenge over the fee currently charged to renounce one's American citizenship by asking the judge handling the case to dismiss it, on grounds that the group bringing the case, the Paris-based Association of Accidental Americans, had failed to demonstrate their arguments.

In a 34-page motion filed last Friday, the attorneys representing the U.S. Government in the matter responded to each of the AAA's claims, filed in June in response to the State Department's earlier Motion to Dismiss.

(All the documents in the matter, including last Friday's filing, may be found on the AAA's website, by clicking here.)

As reported, the Association of Accidental Americans, along with 20 so-called accidental Americans of 10 different nationalities, filed their complaint against the State Department last December, alleging that the US$2,350 fee that the U.S. currently charges those wishing to renounce their American citizenship violates the U.S. Constitution and international law.

In their complaint, the plaintiffs argue that the right of an individual to renounce their U.S. citizenship "is a fundamental, constitutional, natural and inherent right under the U.S. Constitution," according to a summary of the claim.

The State Department’s fee, the claim summary added, is “essentially forcing U.S. citizens to remain U.S. citizens against their will."

The legal filing by the State Department came days after a July 13 ruling by the U.S. Circuit Court of Appeals for the District of Columbia in what Association of Accidental Americans president Fabien Lehagre said was a "major decision which should prove to be very helpful in our case against the State Department."

In a statement, Lehagre added: "In Farrell v. Blinken, the appellate court adopted many of our arguments concerning the right to expatriate.

"[And] the court took a very positive approach to the plaintiff's arguments that are quite similar to our own.

"In addition, the court ruled that the State Department in that case had acted arbitrarily and capriciously in the manner that it dealt with the plaintiff's claim to renounce his citizenship."

In that case, an American named Gerald Farrell claimed that he had done what he needed to in order to obtain a "Certificate of Loss of Nationality" (CLN) from the U.S., to naturalize as a Swiss Citizen "with the intent to relinquish his United States citizenship". The State Department denied him a CLN, on the basis that he had failed to appear at a consulate abroad "in person" to fill out the necessary forms.

Farrell challenged the "in-person requirement," and the court, while saying it agreed "with the district court that the [State] Department has statutory authority to impose an in-person requirement," nevertheless found that it had "acted arbitrarily and capriciously in denying Farrell a CLN," and for this reason instructed the district court to "remand to the [State] Department" that it needed to "reconsider Farrell's request for a CLN."

Marc Zell, the Israel-based attorney who is handling the accidental Americans' case with his Zell & Associates colleague Noam Schreiber, said the U.S. Government's strategy with respect to the accidentals' claims "has been to characterize the case as a routine administrative rule-making matter, which the courts usually treat with great deference.

"Conversely, the government is attempting to divert attention from the constitutional claims.

"This latter tactic will be more difficult after the decision in Farrell v. Blinken."

He added that the accidental Americans would be responding to the government's latest brief on Aug. 20.

In its response to the Accidentals' 45-page June response to the State Department's initial call, in April, for the court to issue a summary judgment in the matter, the State Department has come back with responses to the Accidentals' "Fifth Amendment, First Amendment, Eighth Amendment" and "Customary International Law" claims, arguing that they all lacked "merit".

The renunciation fee, for example, did not violate the Eighth Amendment – which mandates that in the U.S., "excessive bail shall not be required, nor excessive fines imposed, nor cruel and unusual punishments inflicted – "because the renunciation services fee is not a fine and is therefore not subject to the Eighth Amendment's purview," the response document, entitled "Opposition to Plaintiffs' Cross-motion For Summary Judgment And Reply in Support of Defendants' Motion for Partial Dismissal and Summary Judgment", said.

As for violating the First Amendment, which is the one about how Congress should "make no law respecting an establishment of religion, or prohibiting the free exercise thereof, or abridging the freedom of speech, or of the press or the right of the people...to petition the Government for a redress of grievances," the State Department's legal team, among its arguments, quoted a Supreme Court observation from 1968 that it could "not accept the view that an apparently limitless variety ofconduct can be labeled 'speech' whenever the person engaging in the conduct intends thereby to express an idea."

The accidental Americans' "Customary International Law Claim," meanwhile, was said to "lack merit" for a range of reasons, including that "the renunciation services fee does not violate any such purported law."

The accidentals also "failed to carry their burden of demonstrating the existence of a rule of customary international law prohibiting a renunciation processing fee like the one at issue in this case," the State Department response added.

"Even assuming, for the sake of argument, that all of [the accidentals'] statements about a general right of expatriation being recognized under customary international law are accurate, which defendants do not condede, [the accidentals] point to nothing suggesting that such a right is so absolute as to be violated by the imposition of the renunciation services fee.

"Instead, [the accidentals] and their sources frame the purported right as a “right to voluntar[il]y expatriat[e].”

The reason accidental Americans object to the cost of renouncing their citizenships is because this citizenship, for them, is a burden that they typically only discovered recently that they have, as a result of having been born in the U.S. or having been born abroad to an American parent – but which, in both cases, they typically don't want or need, having grown up elsewhere, as citizens and taxpayers of another country. Many don't even speak English, or speak it only with difficulty.

Some are in their 50s, 60s or older, are now retired, and have never had any financial or other benefits as a result of their only-recently-learned-of American citizenship.

As is often noted by such accidentals, the U.S. is the only country besides Eritrea that taxes on the basis of citizenship, which is itself a fact of American expatriate life that many expats struggle with, not just the accidental Americans.

But the fact of expatriate Americans' lifelong tax reporting, and paying, obligations has only emerged into mainstream consciousness over the 11 years since the tax evasion-prevention law known as FATCA was introduced. Previously, American expats, particularly those who left the U.S. as children or young adults, rarely were aware that they were regarded as full-fledged American citizens and therefore taxpayers, and for this reason, expected to file tax returns and potentially pay taxes to the U.S. government every year, unless or until they renounced.

The exact number of such accidentals is unknown, but there are estimated to be more than 300,000 in Europe alone, of which French banking industry officials have said around 40,000 are thought to live in France, and thus are at risk of losing their bank accounts.

The State Department is being represented by Laurel H. Lum, of the U.S. Justice Department.

To hear an interview of Marc Zell by John Richardson, the well-known, Toronto-based American expatriate law expert who does occasional podcasts for the American Expat Financial News Journal, click here.