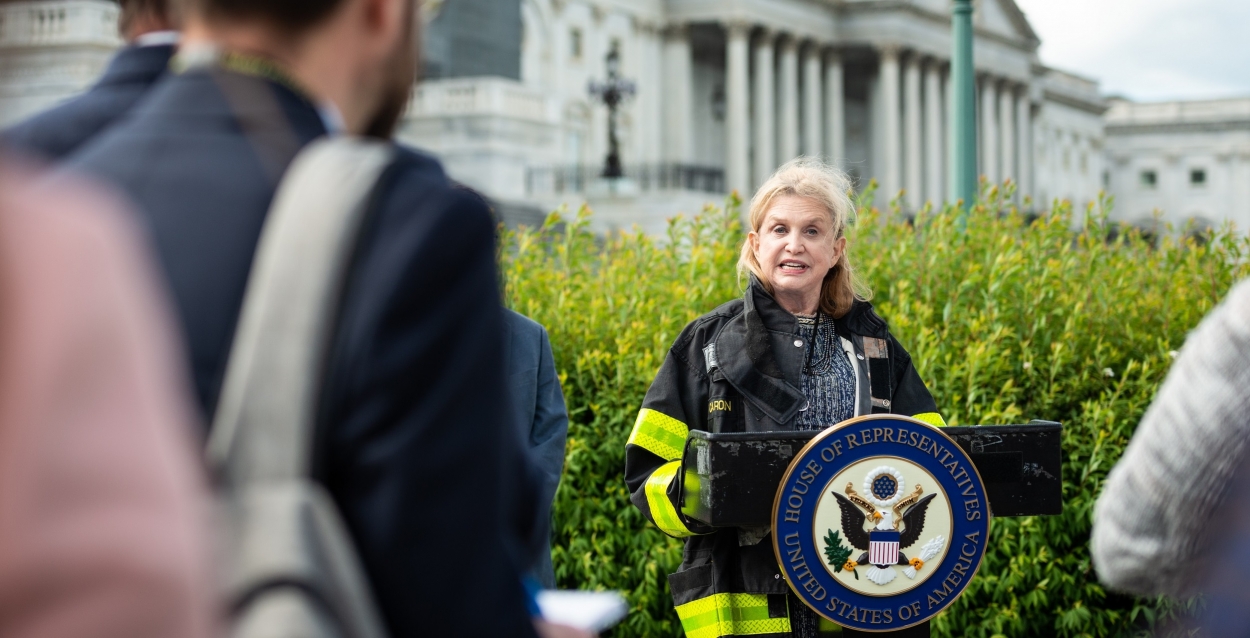 The announcement links to an online form, here, where those interested in participating in the event on Sept. 20 may sign up. (Those wishing to submit questions may do so via this form.) 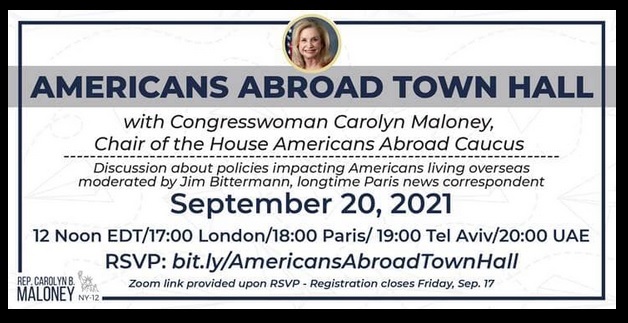 The subject of the Town Hall will be "policies impacting Americans living overseas," and the event will be moderated by Jim Bittermann, a well-known, Paris-based correspondent for one of the U.S. televison networks, according to the announcement, pictured left.

Rep. Maloney wasn't immediately available for comment, but a spokesperson said that "as co-chair of the Americans Abroad Caucus, Congresswoman Maloney is doing her due diligence to ensure that she hears from all people she represents, and is interested to hear about the issues they are most concerned about - especially [those] living abroad during Covid, and the impacts that this has had on these constituents’ lives."

On Sept. 20, the Zoom-enabled event will take place at noon Eastern Daylight Time in the U.S., which will mean 5pm for those located in the UK, 6pm for those in France and elsewhere in Western Europe, and 8pm in the United Arab Emirates.

Rep. Maloney, pictured above, has been a member of the House of Representatives since 1993, originally for New York's 14th Congressional District, then, since 2013, following a re-districting, its 12th district. (The photograph was taken in May, 2019, during a time when she used to make a point of being seen and photographed while wearing a custom-made fireman's jacket, as part of an effort on her part to promote a bill aimed at helping the families of victims of the Sept. 11, 2001 terrorist attacks.)

Together with Republican Rep. Addison Graves "Joe" Wilson of South Carolina – who is still in office – Maloney founded the bipartisan Americans Abroad Caucus in 2007, three years before the game-changing tax law known as FATCA was signed into law.

As conceived by Reps. Maloney and Wilson, the caucus was aimed at "address[ing] the concerns of several million U.S. citizens living outside the United States," according to a background document on the website of the American Citizens Abroad (ACA), a Washington, DC-based advocacy group.

Some 18 members of the U.S. House of Representatives comprise the caucus's membership, according to the ACA's profile of the organization. In addition to two members who happened to have been born abroad – Donald Beyer (D-Virginia), who was born in Trieste, Italy, and Jim Hines (D-Connecticut), born in Lima Peru) – it includes a citizen of the Northern Mariana Islands named Gregorio Kilili Camacho Sablan, who was first elected to the post in 2008.

The Northern Mariana Islands are a U.S. territory consisting of 14 islands in the North Pacific, and because of their affiliation with the U.S., they are deemed to qualify to send an elected "delegate" to Washington, to represent their citizens' interests in caucuses and on committees. Because he's not an actual member of Congress, Sablan can't vote.

He is a member of the Democratic Party, however, according to his website.

As reported here in 2019, Rep. Maloney reintroduced two pieces of legislation that year that she said were aimed at "help[ing] American citizens living abroad who are unfairly and disproportionately burdened by existing tax laws". (Co-sponsor of both bills was the Trieste-born Rep. Beyer.)

The first, known as the Overseas Americans Financial Access Act (H.R. 4362), was designed to compel the U.S. Internal Revenue Service to "exclude from Foreign Account Tax Compliance Act (FATCA) reporting [certain] financial accounts held by American citizens in countries where they are bona fide residents," a proposal likened at the time to the so-called "Same Country Exemption" that the ACA had been calling for since 2015.

Rep. Maloney's second bill, which she'd also introduced previously but unsuccessfully, was called the "Commission on Americans Living Abroad Act of 2019" (H.R. 4363), and would have provided for the creation of an "Executive Commission," comprised of a 10-member bipartisan panel, which would be tasked with "examin[ing] the concerns of U.S. citizens living and working abroad."

"The Commission would analyze, report on, and make appropriate recommendations to address the effects of activities, laws, and policies of the federal government on Americans citizens living overseas," a statement issued by Rep. Maloney's office at the time said.

Rep. Maloney's office is not believed to have said whether she intends to reintroduce either bills in this Congressional session, but it is thought that next month's "Americans Abroad Town Hall" will help her, and other Americans Abroad Caucus members, to determine what the best strategy going forward would be.