The Nederlandse Accidental Americans (NLAA), an organization that advocates on behalf of accidental Americans who are residents and citizens of the Netherlands, has joined forces with a group representing some individual European investment bankers and former bankers to file a petition calling for change in the way that the EU allows companies and governments to share the personal and financial data of so-called "accidental Americans" who happen also to be EU citizens.

The NLAA filed its petition jointly with an organization known as the Collective of Bi-National European Investment Bankers, about which not much is known, beyond that the members are Europeans with U.S. links, and that they're content to remain anonymous.

The petition is understood to be the fourth petition currently before PETI, as the European Parliament's Petitions Committee is known, and the third to be filed this year, that has its origins in major difficulties that American expats and so-called "accidental Americans" have been having ever since a a 2010 U.S. tax evasion-prevention law known as FATCA came into force.

The four petitions are seen as adding to pressure that has already been building on EU lawmakers to address such aspects of FATCA as its "extraterritorial" taxation of EU citizens, and the fact that it is causing EU citizens with legacy U.S. citizenship issues to be prevented from being able to get or maintain bank and other financial accounts.

There are also seen to be certain data protection concerns as a result of the way FATCA obliges EU banks and financial institutions to report to the U.S. on the bank accounts of all of their "American" clients, including those "accidental Americans" who are full EU citizens and taxpayers, and whose U.S. citizenship is typically the result of having been born in the U.S. to non-American parents, who returned to their home country soon afterwards.

The NLAA's petition was filed in March and accepted by PETI in July, according to a spokesperson for the NLAA. (See box, below, for instructions for viewing and signing it; these instructions may also be found online by clicking here.) 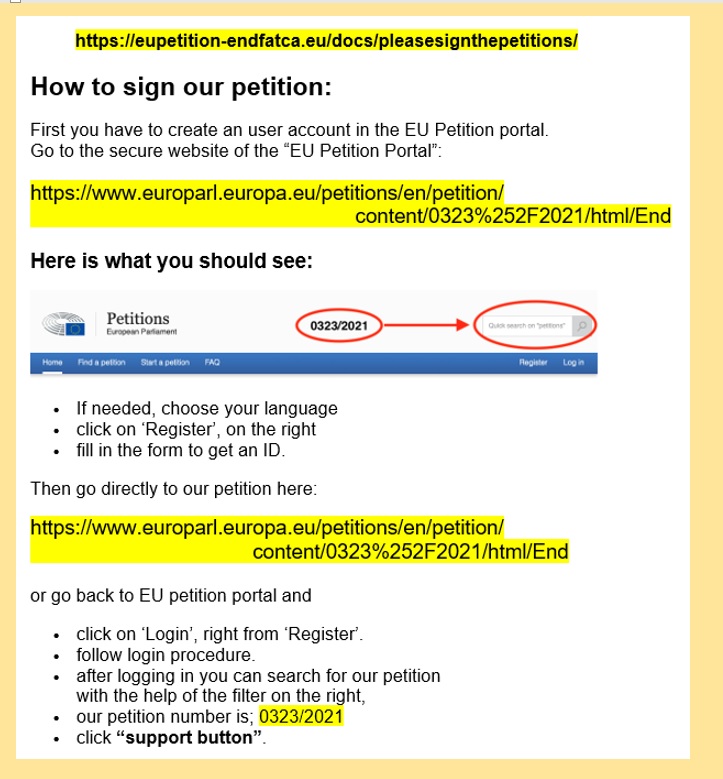 (Currently the four un-named individuals behind the NLAA's petition are requesting that their allotted five-minute slot on Sept. 2 be increased to 15 minutes.)

In their petition, No. 0323/2021, which may be viewed by clicking here, the NLAA and its fellow petitioners – referred to by PETI as a single female individual identified only as "G.L. (French)," say they are asking the European Parliament to "take action to put an end" to the way the "personal data" of "bi-national European/American citizens" is "being routinely exchanged with a non-member state" (the U.S.), in compliance with FATCA, as noted above.

They also call on the European Parliament to end the way they say "[certain] financial institutions are denying [dual EU/American citizens] access their services, or even prohibiting them from purchasing shares of mutual funds" that other European investors are able to buy, and to "mandate the European Securities and Markets Authority to [investigate] the national competent authorites that allow" this alleged discrimination.

The petition continues by noting that the situation is resulting in "discrimination based on nationality, breaching Article 18 of the TFEU [Treaty on the Functioning of the European Union], and Article 21.2 of the Charter of Fundamental Rights," but that "some national authorities in charge of financial markets have ignored this discrimination" and that, although the EU "is completely aware of the situation, it has never acted to address it."

The petition ends with a request that the European Commission "negotiate with the U.S. authorities to achieve the right for the bi-national European/American citizens to renounce [their] U.S. citizenship without facing any kind of hindrances, entering into compliance with the IRS, or paying the exit tax."

The NLAA and its fellow petitioners have set out a more detailed explanation of what they're hoping to achieve with their petition on their recently-launched campaign website, where it my be viewed by clicking here.

As this and other media outlets have been reporting, "accidental Americans" have been challenging the U.S.'s citizenship renunciation procedure, which is costly and involves their having to enter into a program, file tax returns for the last several years, and pay a minimum fee of US$2,350.

Among the additional issues they raise here is what they argue is the EU's "[discrimination] against more than 1.2 million European citizens, including accidental Americans" because of the way it has structured the marketing of a new category of bonds  – designed to help to finance the Covid-19 recovery plans in the EU's member states Member States  – so as to prohibit their sale of "U.S. persons".

Such a restriction, they argue, represents "a gross breach of the Charter of Fundamental Rights and the TFEU (Treaty on the Functioning of the European Union)."

The first person to file a petition with the European Parliament's Petitions Committee over alleged violations of EU law resulting from the implementation by EU institutions of the US law known as FATCA was a France-based accidental American, who has been known by his PETI filing name of  "Mr. J.R. (French)" since he filed his petition in 2016.

Importantly, his petition remains open, and the individual behind it has repeatedly spoken out publicly on the issues that led him to file it, including at a major European Parliament hearing on the unintended consequences of FATCA in 2019.

A follow-up, 36-minute hearing took place last November, during which, as reported, four members of the European Parliament joined other speakers in slamming what they said was the European Commission's continued failure to take serious action aimed at addressing the banking and tax problems that thousands of American/EU dal nationals in Europe were struggling with.

As reported, the second PETI petition, which is being crowd-funded, was filed in 2020 by a retired Dutch KLM pilot named Ronald Ariës, who was born in the U.S. but who  went on to grow up with his Dutch parents in the Netherlands.

The third, and last FATCA-related petition until the NLAA's, was filed recently by an American resident in the Netherlands named Nicholas Lee, whose petition addresses the difficulty "U.S. persons" who are resident in the EU have, owing to FATCA, to be able to access financial services or products that non-Americans can. He says it was accepted by PETI in mid-July.

Further details about these four PETI petitions as well as "other important initiatives against FATCA" are featured on a page of the recently-launched website of the NLAA and its co-petitioners, www.eupetition-endfatca.eu.

This page, which lists such initiatives as a 2019 legal challenge against the British tax authorities' sharing of her data with the U.S., by a UK-resident American known as "Jenny"; the long-running efforts to bring about change in the way the EU permits member states to enforce FATCA, on the part of Mishon de Reya partner Filippo Noseda; and the often-innovative efforts of Fabien Lehagre's AAA, may be found by clicking here.

Other flashing lights for
EU lawmakers over FATCA

Meanwhile, a couple of European Court of Justice (CJEU) decisions last year were also seen as putting European Union officials on notice that FATCA was in need of revisiting. They included a judgement on Oct. 6, as well as an earlier one in July, referred to as "Schrems II" as it struck down the main mechanism used by the EU to protect the personal data of EU citizens when it's transferred to the U.S., in a way similar to the way another EU arrangement known as the Safe Harbor Agreement had been struck down by the CJEU in 2015, again over personal data protection issues.

In the wake of those two CJEU cases, the European Data Protection Board in April issued a statement in which it called on all of the European Union's 27 member states to consider a "review" of their international agreements "that involve international transfers of personal data, such as those relating to taxation (e.g. to the automatic exchange of personal data for tax purposes)."

As reported, that EDPB announcement was was enthusiastically welcomed by anti-FATCA campaigners.

Below, from the NLAA/Collective of Bi-National European Investment Bankers' recently-launched website, a  reminder to their supporters to also sign the petitions of two of the other petitioners who are also currently challenging the way FATCA is being used against EU citizens, (once they've signed their own petition)...