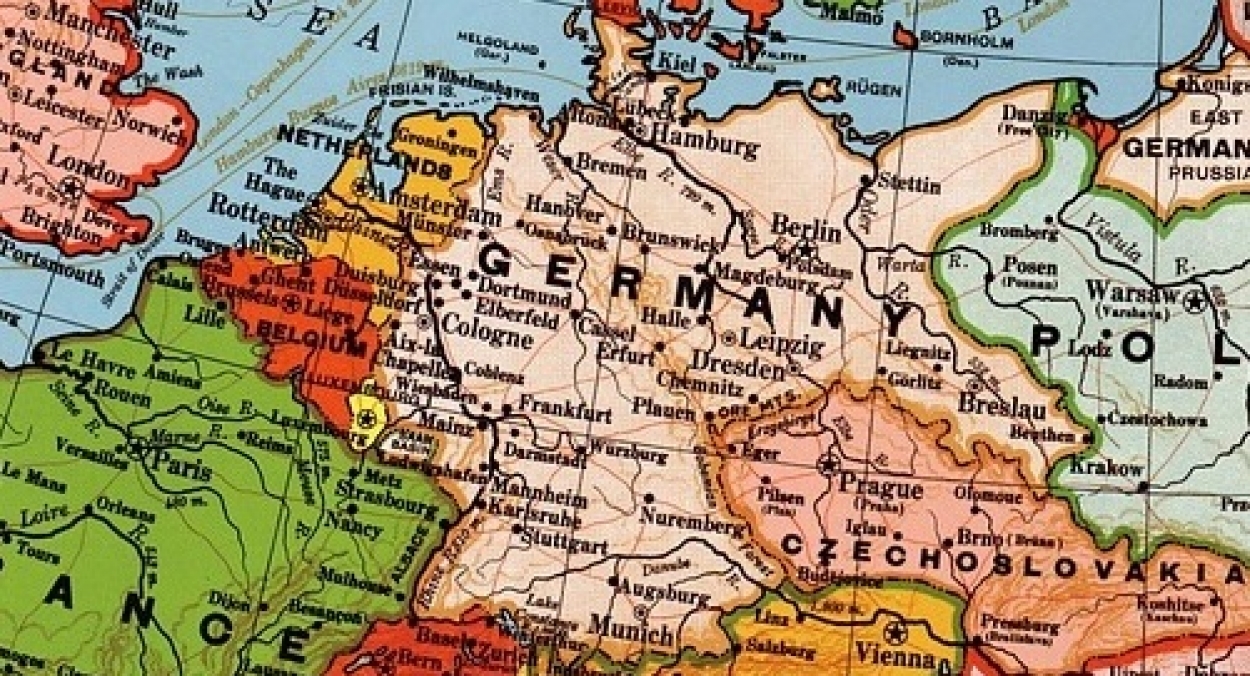 Berlin-based Solarisbank, which also does business as Kontist, has written to its American expat clients within the past two weeks to tell them that they must take their business elsewhere, because it cannot continue to look after American account-holders, according to an American expat resident in Germany, who told the American Expat Financial News Journal that they had received such a message in an email on Sept. 1. 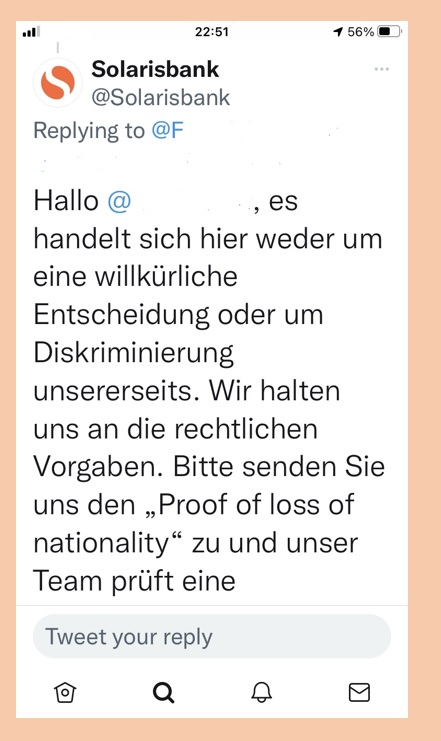 The matter has also featured on Twitter, where, in a tweet that has apparently now been removed, @Solarisbank said, in German, on Sept. 8, that it was closing a Switzerland-based individual's account in response to "legal requirements" (see left, with the names of the individuals it was addressed to removed), and that it would need to see this person's "Proof of Loss of [U.S.] Nationality" if they wished to have their account restored.

This was in response to an earlier Tweet, also no longer available, in which this Switzerland-based individual – who evidently had renounced their citizenship at sometime in the past – said that Solarisbank had "closed my prepaid credit card [account]" the previous day "because I can't change my USA birthplace after renouncing U.S. citizenship a decade ago."

"#Compliance was originally not meant to harm consumers with #discrimination" the former American added, in his Tweet.

This same individual also shared his frustration to fellow members of a closed Facebook group, and posted a copy of the Solarisbank Customer Support email he'd received, which explains that  his "business relationship" with three separate entities – Nuri GmbH (a Berlin-based fintech banking entity, known until recently as Bitwala, which works in partnership with Solarisbank); its "partner," Solarisbank AG; and Solaris Digital Assets GmbH –  was being terminated "with immediate effect," pursuant to certain terms of service.

The individual was initially told that he could continue to have access to his "Nuri apps" in accordance with certain other terms of service, while his "credit balances" would be returned to him, via a transfer to an account which he was asked to designate.

Spokespeople for Kontist and Solarisbank didn't respond to requests for comment.

Some hours after this story was initially published on Sept. 13, the former American who now lives in Switzerland reported that his accounts have now been reopened, as a result of his providing Solarisbank and Nuri with his Certificate of Loss of Nationality.

Solarisbank seen to have joined
a growing FATCA-avoiding club

In announcing that anyone who happens to be an American citizen who lives outside of the U.S. cannot open or maintain one of its accounts, Solarisbank joins countless other banks and financial institutions – including some based in the U.S. – that have taken the same action ever since the Foreign Account Tax Compliance Act was signed into law in 2010.

Because FATCA obliges them to report to the U.S. Internal Revenue Service key information about any  accounts they hold that belong to American clients, whether living in the U.S. or abroad, and provides for the implementation of significant penalties for any institution that's found to be failing to fully comply with the law's reporting obligations, many non-U.S. banks and financial institutions (and even many U.S.-based financial services businesses) would rather avoid any potetial risks and hassles altogether by simply not allowing Americans to open or maintain accounts.

One of the issues for Europe's banks is that they are required by EU law to provide bank accounts to those EU citizens who ask for one. The so-called Directive on Payment Accounts "gives people in the EU the right to a basic payment account regardless of a person's place of residence or financial situation," according to the European Commission's website.  While ordinary American expats aren't covered by this directive, most experts believe it does apply to dual U.S./EU nationals as well as accidental Americans, who, by definition, lack such details as a U.S. Tax Identification number that a U.S. bank would require.

As this and other publications have been reporting for more than two years now, banks and financial institutions began to head for the exits of the American expat banking market in earnest about two years ago, when the U.S. announced that it planned to begin enforcing FATCA at the end of 2019, after a years-long grace period.

The U.S. subsequently extended the deadline till July 2020, but as 2021 comes to an end, it seems few banks are willing to take any chances.

What's more, banking industry experts and wealth managers say, those banks and financial businesses that are attempting to attract clients on a budget are particularly keen not to have American expat clients, because the costs of maintaining them would mean they would have to raise their fees for all their clients, potentially making them less competitive with their rivals, at a time when margins are already miniscule.

Such price-conscious banks include most of the online-only providers, such as Solarisbank, although even well-established major banks are entering the online-only banking arena these days.

As reported, even New York-based banking and financial services giant Goldman Sachs has said American expats are not able to sign up to its new range of Marcus-branded products – which it began to roll out to UK clients in September, 2018 – citing FATCA.

The UK is the only country outside of the U.S. where the Marcus range is currently being marketed.

The Marcus range (which is named after one of the parent company's founders, Marcus Goldman), is positioned as a simple, accessible online banking option, and it has already received high scores in media reports for its competitive rates.

"I'll never get my head around the fact that my freelance business account is being closed solely on the basis of my American citizenship," the first American expat living in Germany mentioned above, told the AXFNJ, in an email this past week.

"The combination of a heavy-handed FATCA and current German legislation leaves me absolutely vulnerable to what is tantamount to perfectly legal discrimination, based on my nationality.

"The exact same thing could happen to my German private bank account at any time. How is this even remotely acceptable?"

The fact that the American is a freelancer isn't surprising, since Kontist sells itself as a specialist online bank for the self-employed.

A recent start-up, it first began to collaborate with Solarisbank in 2016 – which at the time was itself only getting started, according to a 2018 article on Solarisbank's website entitled "Solarisbank and Kontist: an up-close look into our collaboration.")

Says Kontist on its own website today: "All the must-haves for the self-employed. In one.

"Kontist’s mission is to make life easier for the self-employed."

It goes on to say that "10.000s of freelancers use a Kontist account."

Americans already on notice in Germany

As this and other publications have been reporting, Solarisbank isn't the first German bank to ask its "U.S. person" account-holders to take their money elsewhere. In late December, as reported,  Augsburger Aktienbank, one of the largest banks in Germany's Bavaria region, was reported to be preparing to inform its American clients that they would be having to take their accounts elsewhere by the end of March.

News of AAB's decision to close its doors to Americans was originally reported on Dec. 29 by Fonds Professionell, a German-language news magazine and website for German and Austrian investment advisers. The publication said Augsburger Aktienbank would be closing the accounts of its American clients "as of March 31, 2021," while declining to accept as customers any other "U.S. persons" going forward.

A few months earlier, a German citizen had posted a petition on the website of the Deutscher Bundestag (German Parliament) that called on the German government to intervene with respect to the difficulties many "German citizens" were allegedly struggling with as a result of FATCA, in what was seen at the time as evidence that dual American/German citizens were among those struggling to keep their bank accounts – a phenomenon that has been noted in other countries as well, as this and other media organizations have been reporting.

That petition called on the German government to "take up and implement in German law" certain key provisions that had been contained in a resolution unanimously approved by the European Parliament on July 5, 2018, which called on EU member states as well as the European Commission to re-open negotiations with the U.S. over how FATCA is enforced.

One option for Americans who are struggling to maintain their overseas bank accounts has been, since March 2016, a State Department Federal Credit Union (SDFCU) account.

These are made available through the Washington, DC-based American Citizens Abroad organisation, which said it lobbied U.S. government officials for "years" before it was able to secure these accounts, which may be used by expats who need mortgages as well as basic banking facilities.

More information on these accounts may be found on the ACA's website by clicking here.

Editor's note: This story was updated on Sept. 13 to include new information about the unidentified, Switzerland-based former American mentioned above, who was initially told that his Nuri and Solarisbank accounts were to be closed, owing to the fact of his American birth, but later informed that he could remain a client after he provided them with his Certificate of Loss of Nationality.

More in this category: « Ass'n of Accidental Americans to crowd-fund complaint over continued closure of U.S. renunciation facilities Forthcoming U.S. expat-focused tax and financial planning webinars, podcasts, and even an 'online Town Hall' »