The Association of Accidental Americans (AAA) has issued a call for volunteer plaintiffs "for the lawsuit we are going to bring against the State Department," now that it has decided to go ahead with its latest complaint over the way the U.S. currently facilitates citizenship relinquishments.

According to AAA founder and president Fabien Lehagre, the organization needs "at least one" volunteer for each of the four criteria that the complaint will address.

In other words, he says, this means:

* At least one individual who has "started the [citizenship relinquishment] process – i.e., filled out forms and sent them to the embassy, "and who lives in a country where the embassy has formally and explicitly suspended loss-of-citizenship services, such as France or Germany";

* At least one individual who wishes to renounce, but who has yet to formally commence the process, and who lives in a country in which the U.S. Embassy has formally and explicitly suspended loss-of-citizenship services, again, such as France or Germany;

* At least one individual who has started the renunciation process, but who is still on a waiting list (the AAA would need information as to the length of time they have been on the list, and how long they're expected to remain there); and finally,

*  At least one individual who has not yet begun the renunciation process, and who lives in a country where the U.S. Embassy in question hasn't formally suspended loss-of-citizenship services, but where the waiting lists are prohibitively long.

Lehagre adds that for the purposes of the AAA's planned legal case, the volunteer plaintiffs may be either individuals who wish to voluntarily renounce or relinquish their U.S. citizenship. Although often used interchangeably, the two terms differ slightly, based on several mostly out-of-date definitions, one of which holds that "renunciation" is one of seven possible acts of expatriation or relinquishment, the others having previously included "taking an oath of allegiance to a foreign country" – something which, as pretty much any accidental American would be quick to report, isn't the case today.

He also noted that none of the individuals who are already involved in an earlier case the AAA is bringing against the State Department should volunteer to be plaintiffs in the new case.

As reported, the AAA announced on Sunday evening that it had decided to go ahead with its latest complaint against the U.S. State Department after having reached its crowd-funding goal of US$25,000 "in less than 10 days," with "more than 230 people" having agreed to help fund it.

(Lehagre had announced  the crowd-funding challenge on Sept. 5.)

Anyone interested in joining Lehagre and his Paris-based AAA in the new action against the U.S. State Department is invited to email him "with details of their situation" at This email address is being protected from spambots. You need JavaScript enabled to view it.

The AAA already has an ongoing legal challenge against the State Department, filed last December, in which, along with 20 so-called accidental Americans of 10 different nationalities, it alleges that the US$2,350 fee the U.S. currently charges those wishing to renounce their American citizenship violates the U.S. Constitution and international law. 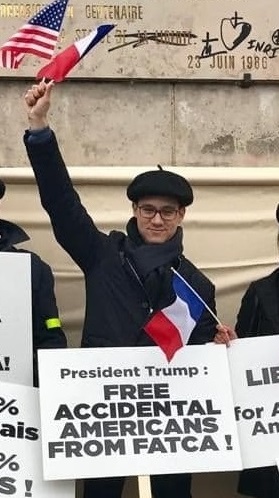 It was the organization's first legal action in the U.S., but the latest in a series of similar cases it has brought in Europe since it was founded in 2017 by Fabien Lehagre, (pictured left during a 2018 demonstration in Paris), a California-born accidental whose French father brought him back to France at the age of 18 months.

As reported,  the AAA filed a complaint in 2019 against the European Commission, alleging that the country was infringing European data protection and privacy laws, after having filed lawsuits earlier in the year against a number of online banks in France for discriminating against Franco-American dual nationals by refusing to open bank accounts for them because of their U.S. citizenship status.

It also challenged the French government's implementation of FATCA, on behalf of the U.S., violated the privacy of dual French/American citizens, but lost the case in July 2019, after France's Conseil d'Etat ruled that the law could stand and didn't need changing or to be scrapped.

Currently the AAA has some 1,180 members.

More in this category: « As AAA announces its new legal challenge to go ahead, expats echo its call for renunciation to be made easier InterNations: U.S. expats 'older than the average working expat'; more likely to go abroad 'for love, adventure' »