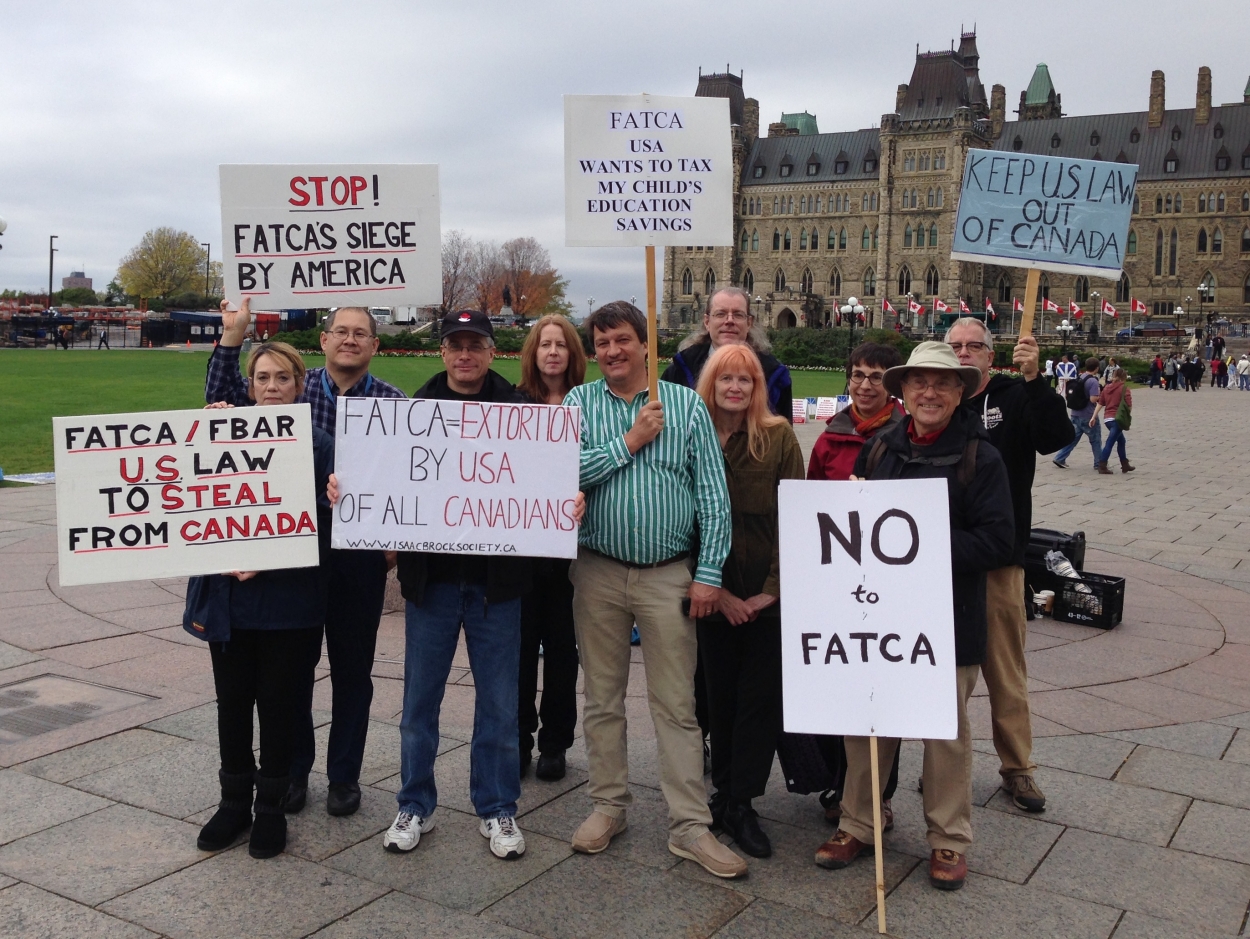 An anti-FATCA protest in October, 2013 in Toronto by members of the Isaac Brock Society campaign group

Washington may be shut down for both the Christmas/New Year holidays and as a result of President Trump’s government-wide shutdown aimed at strong-arming Congress into approving his US$5bn plans to fund a wall along America’s border with Mexico.

But this hasn’t stopped ongoing and mounting efforts in a number of countries around the world to challenge, or at least clarify, existing U.S. programs that currently provide for the taxing of Americans who live abroad.

In particular, FATCA, a 2010 law aimed at cracking down on the use of non-U.S. financial institutions by American citizens to hide their wealth, is in the crosshairs of a growing number of foreign governmental groups, after more than eight years of challenges by organizations representing expatriate Americans, including the Republicans Overseas, Democrats Abroad and American Citizens Abroad.

As reported earlier this month, reports out of Europe indicate that the European Union is planning in 2019 to update its year-old tax haven “blacklist” in such a way that the U.S. might well end up on it. This is because the U.S. has declined to join more than 100 other countries around the world – including the 28 EU member countries – in an automatic exchange of financial information program known as the Common Reporting Standard.

The Common Reporting Standard (CRS) was based on the U.S.’s FATCA (Foreign Account Tax Compliance Act), but requires all its signatories to reciprocate in the exchange of information about one another’s tax-residents’ accounts.

Although reciprocity was mentioned when the U.S. first asked other countries to sign “intergovernmental agreements” with it, as a means of creating the reporting regime needed to enforce FATCA, it has emerged that reciprocity is in fact not taking place.

What’s more, Washington insiders are now saying that Congressional approval, in the form of a vote, would be needed before the U.S. could legally reciprocate with its FATCA IGA partners, and provide them with the same type of banking details that these partner countries are now providing to the Internal Revenue Service.

This fact, combined with the U.S.’s determination to stay out of the CRS, is increasingly catching the attention of foreign governments.

Another sign of the growing dissatisfaction with the way the U.S. is making use of FATCA to serve its own tax-collecting purposes occurred some months back in Strasbourg, when the European Parliament, by a resounding vote of 470 to 43, with 26 abstentions, on July 5 approved a resolution in support of the cause of Europe-based “accidental Americans” whom FATCA has helped the IRS to identify and to come after, in some cases aggressively, for undeclared assets.

These “accidentals” argue their longstanding residency, citizenship and payment of taxes in other countries should be sufficient to free them from any obligations to the tax authorities of the U.S. – and that the governments of the countries in which these individuals now live, and pay tax, should speak out on their behalf in diplomatic circles – which, the fact of the EU Parliament resolution in July indicates, is beginning to happen. Among other things, that resolution called on EU member states as well as the European Commission to re-open negotiations with the U.S. over FATCA.

As reported, the FATCA matter has even been raised in the U.K. recently, in the form of a written question posed earlier this month to the government by a Labour party MP and shadow minister for international development, Preet Kaur Gill.

In Canada, meanwhile, a group of anti-FATCA campaigners who are members of a Canadian organization known as the Alliance for the Defence of Canadian Sovereignty (ADCS), is continuing to challenge against the Canadian government in court for its “turning over to the US Internal Revenue Service” information on all those Canadian citizens whom the US deems to be “US persons” and therefore subject to US tax. They say hearings in the matter are set to begin on Jan 28, according to a posting on the website of the Isaac Brock Society,  a Canada-based organization that has been campaigning for fairer treatment from the U.S. government on behalf of American expats since 2011.

They are continuing their challenge in spite of a major setback in April, when the U.S. Supreme Court declined to hear a legal challenge to FATCA that had been brought by a group of American expatriates and led by Kentucky Senator Rand Paul. FATCA, they argued, violated their constitutional rights.

The Supreme Court decision denying “certiorari” to the plaintiffs in that matter meant that a Sixth Circuit decision handed down the previous year, which found that they lacked the standing to sue, and that the harms they claimed to have suffered as a result of the law were not, in fact, directly caused by it, was final.

The Rand Paul case was one of a number of efforts that have sought, thus far without success, to address the problems caused by FATCA.  Certain elements in the Republican party  in particular have opposed FATCA almost since its inception.

A group known as the Republicans Overseas Israel mounted a Supreme Court challenge to the enforcement of FATCA in that country, which ultimately was also unsuccessful.