The latest Tweede Kamer hearing in the Netherlands, on the fraught subject of the U.S. tax evasion-prevention law known as FATCA, revealed that progress for those dual U.S./Dutch citizens affected by it continues to elude Dutch lawmakers, according to a number of "accidental Americans" and others who viewed the two-hour-long session online.

These observers also took issue with a package of what was presented as new data about the numbers of accidental Americans resident in the Netherlands who have been affected by FATCA, which was said to have been compiled from information obtained from the country's four largest banks.

"We are very disappointed," a spokesperson for the Netherlands Association of Accidental Americans (NLAA) said, in a statement after the hearing, on Tuesday evening in the Hague, had ended.

"The solution is still not there, and hardly anything has been done with our input [ahead of] this consultation."

The NLAA statement went on to note that "no mention" had been made during the session of what some previously have suggested might be a sensible negotiating proposal for Dutch negotiators to make to their American counterparts, which would see the Intergovernmental Agreement (IGA) that currently sets out how the U.S. FATCA law is enforced in the Netherlands being "adapted" in some way to accommodate the specific issues of accidental Americans.

Because of the various factors that make them "accidentals", these individuals typically lack U.S. Social Security numbers and/or Tax Identification Numbers (SSNs and TINs) – as they are basically Dutch citizens with only very distant or tangential links to the U.S., such as having been born in the States to Dutch parents who didn't remain there – the thought is that the U.S. might simply agree not to insist that these particular individuals obtain such numbers, thus enabling, say proponents of this approach, everyone to move on.

With respect to the Dutch government's ongoing talks with the U.S., Hoekstra said on Tuesday that the preferred strategy at the moment was to continue to work towards a solution together with the U.S., (step 1), as is now being attempted, in conjunction with France; and only then, if that still didn't work, to go ahead with Step 2 – which he didn't explain other than to suggest that it would be worked out when the time came.

The NLAA said its ongoing problems with the government's approach was that it prioritized the interests of the U.S. government and Dutch banks well ahead of those of its citizens who happened to have legacy U.S. complications, ie., its accidentals.

"They [the Dutch lawmakers] approach the problem by wanting to give comfort to the [Dutch] banks as soon as possible, and not to us, the Accidental Americans," the NLAA statement added.

"This is a fundamental point on which we differ greatly.

"[We believe] the Netherlands must protect its own citizens [first]."

Tuesday evening's hearing drew a relatively small number of Dutch House of Representatives members, according to expats who watched the event live online. (One  noted that there were certain matters taking place elsewhere in the Dutch government at that time that might explain the low turnout.) 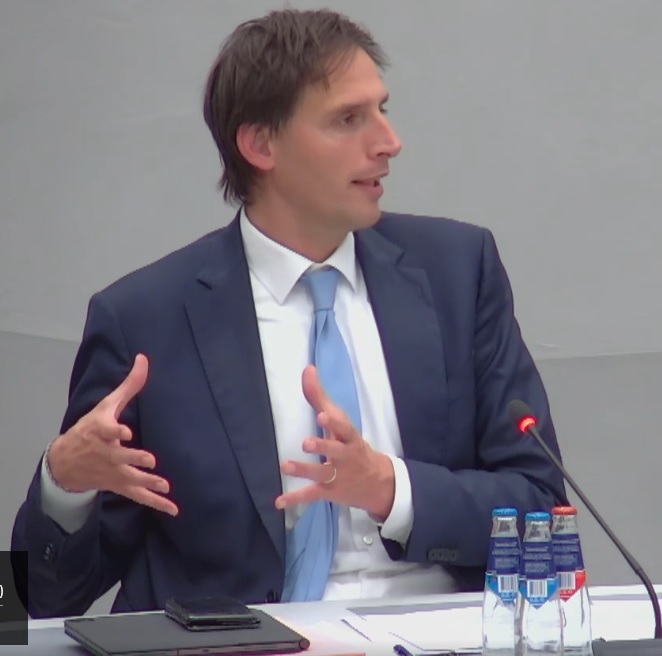 The hearing, a recording of which may be viewed here, focused mainly on two topics: the "un-banking" of those Dutch citizens with some distant U.S. links, who lack U.S. Social Security numbers and/or U.S. Tax Identification Numbers (SSNs and TINs) and who, as a result, are being told they can no longer keep their bank accounts; and the problems certain others have been having in their attempts to deposit checks in Dutch banks, particularly U.S. government-issued CARES Act stimulus checks.  As reported, this was an issue that surfaced last year and earlier this year.

Sources told the AXFNJ at the time that checks had largely become obsolete in the Netherlands years ago, owing to the country's "extremely efficient digital banking system," and the fact that checks are viewed in banking circles there as a fraud risk.

On Tuesday evening, Hoekstra effectively confirmed that this is where things still stand, because as with growing numbers of banks around the world, Dutch banks simply no longer have the facilities in place to accept paper checks, leaving Americans who receive them to have to find other options. Those who need to cash checks, he suggested, may wish to try banks over the border, in Belgium.

It was Hoekstra's delivery of what he said was new and "official" data on the numbers of various types of Americans and "accidental Americans" resident in the Netherlands -- and thus presumed in need of banking services, including basic current accounts which under EU law, EU countries are technically obliged to provide – that many of those expats watching the hearing found most in need of comment and further consideration.

The fact that the key data in question was said to have been supplied by the Netherlands' four largest banks was considered important because, some Americans resident in the Netherlands say, such larger institutions are more likely to accommodate American account-holders willingly than the country's smaller institutions.

Most controversial of Hoekstra's numbers was a figure of just 95 individuals whom these banks reportedly said lacked the necessary SSNs or TINs as well as any address in the U.S., and whom therefore appeared to be "negatively affected by FATCA". Previous estimates have been in the thousands to tens of thousands.

Among those questioning this number was the NLAA, which noted that Hoekstra "did not disclose how the banks came to this number, nor has this number been checked by an independent authority."

The NLAA added that it believed that "not all U.S. persons [who bank at these institutions] appear in their systems data," based on other data sets, and the statistics of the Centraal Bureau of Statistiek (CBS), the Netherlands' bureau of national statistics.

Two of the MPs present, Idsinga and Alkaya, questioned the numbers as well. One observer noted, however,  that the number of Americans who have been renouncing their citizenships in the Netherlands over the past few years has been high, and that this could be beginning to affect the numbers. However, other sources have suggested that more companies may be posting Americans in the Netherlands whom they had employed in the UK, as a result of Britain's recent departure from the European Union.

(As reported here in October 2019, a Netherlands-based American citizens' advisory organization called Americans Overseas had reported that some 1,700 dual American/Dutch citizens had reportedly handed back their citizenships that year, "six times as many as in 2016".)

Hoekstra also told the hearing on Tuesday that the Big Four Dutch banks were reporting their total U.S. person account-holders numbered  around 11,500, which, if true, is significantly below official Dutch government estimates of around 20,000 U.S. citizens, and around 40,000 "residents born in the U.S."

Meeting in October with Dutch banks

Hoekstra also confirmed reports that his office would be meeting with the Dutch banks again next month, at which meeting, he said, he intends to propose that an existing agreement not to close any accounts on the basis of a missing TIN be extended, until the end of 2022. He and Vijlbrief also said that talks with the U.S. were ongoing, but described them as "tough".

The cost of renouncing American citizenship also came up, with MPs saying they would like to see a cheaper option than the current US$2,350 fee, preferably replaced by no fee at all; the sharing of individuals' personal data also was mentioned, particularly with respect to the fact that it may be taking place even when the financial accounts of those in question are below the minimum required amount.

Tuesday evening's hearing was the latest in a series of such hearings that have been called over the past few years by Dutch lawmakers eager to resolve the FATCA-related banking problems their constituents say are making their lives challenging. As reported here as early as January 2020, Dutch banks have been moving to close the banks of those of their American account-holders who have failed to provide them with such information as SSNs and TINs, as the banks are obliged to provide these to the U.S. under FATCA, or else face potentially significant penalties.

Last December, a Dutch court rejected a legal attempt by a retired Dutch KLM pilot to challenge his bank's right to close his accounts on the basis that he had failed to provide it with the U.S. tax identification data it said it needed. The pilot, Ronald Ariës, is considered by the U.S. to have tax reporting obligations because he was born there, even though he's lived all but the first of his 62 years in the Netherlands.

Increasingly, say the accidental American Dutch citizens who are struggling to avoid having to enter the U.S. tax and citizenship systems in order to maintain their local (Dutch) bank accounts, the Dutch government appears to be taking the view that the problem lies with the U.S., and that there is little it can do.

The American Expat Financial News Journal would like to thank Jet Barendregt and Rob Gerretsen, on behalf of the Netherlands Association of Accidental Americans, along with a number of other individual U.S. citizens resident in the Netherlands and Dutch/American citizens who helped us to cover this hearing.