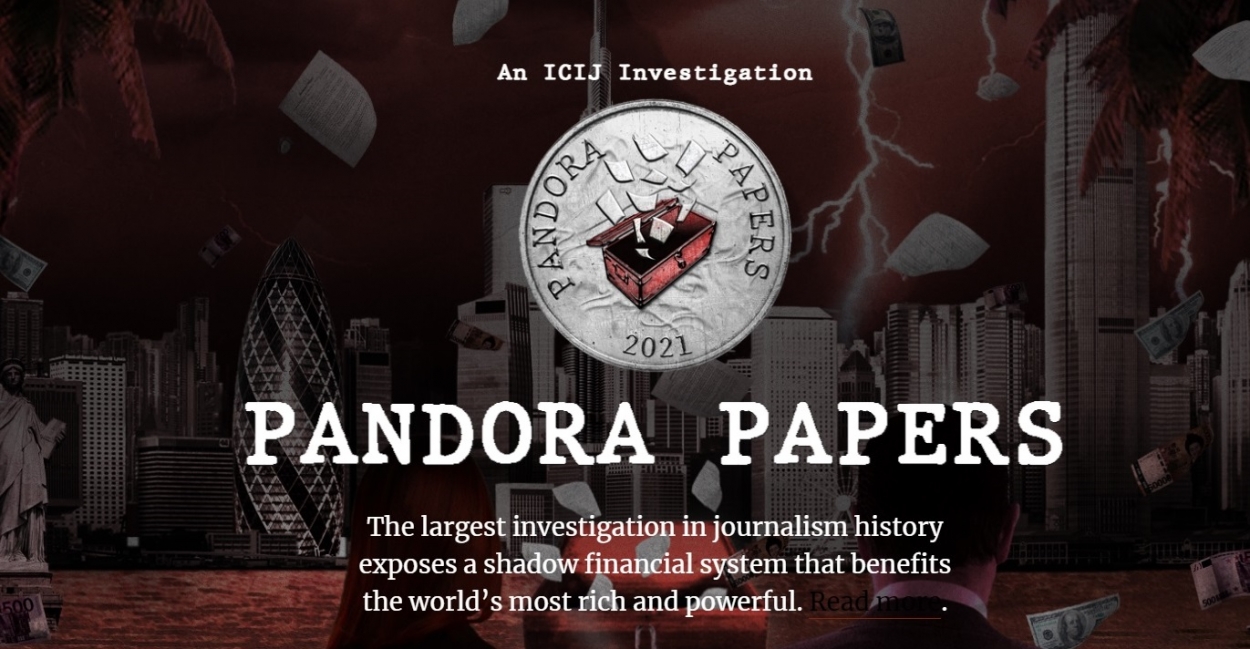 The idea that the country that introduced the Foreign Account Tax Compliance Act (FATCA) in 2010 – in order to ensure that Americans didn't use overseas accounts to avoid their U.S. tax obligations – is in the process of becoming one of the most accommodating tax havens for non-U.S. persons around the world isn't new...

But over the last few days, "tax haven U.S.A." has been given new visibility and prominence in the so-called Pandora Papers, a trove of findings based on almost 12 million leaked documents that began to make headlines on Sunday, beginning on the pages and websites of media organizations affiliated with the International Consortium of Investigative Journalists (ICIJ).

Such media organizations have included the Washington Post in the U.S., Le Monde in France, and the Guardian newspaper and the BBC's Panorama current affairs program in the United Kingdom.

The findings are expected to encourage U.S. lawmakers to proceed with proposed measures aimed at calling for the "beneficial owners" of assets to be identified, as well as a particularly controversial plan to require U.S. banks to report to the IRS on all the routine annual cash flows of their Stateside account holders "above a US$600 balance, or with more than US$600 of transactions in a year," media reports say.

To the frustration of some expatriate Americans, though, FATCA's role in helping to ensure that the U.S. holdings of non-Americans are kept secret from their homeland tax authorities – owing to its being the reason the U.S. gives for not needing to sign up to the automatic tax-relevant information exchange program used by more than 100 other countries around the world – is not being flagged up to the extent they feel it should.

As this publication and others have been reporting for years, the fact that FATCA obliges "foreign (i.e., not American) financial institutions" located in other countries to provide the U.S. with the bank account details of all their American clients, but does not offer to reciprocate with data on these countries' own citizens' U.S. financial accounts has been a source of some frustration on the part of some of these other countries, but thus far, none have yet ended their FATCA IGAs as a result of it. In France, as reported, lawmakers got as far as a vote on the matter of demanding reciprocity in the National Assembly earlier this year, but in the end, decided not to go ahead with it.

Fabien Lehagre, the founder and president of the Paris-based Association of Accidental Americans, which has been actively challenging the way the U.S. implements FATCA in France specifically and Europe and the rest of the world generally for the last few years, was among the first to respond to the Pandora Papers reports.

On Monday Lehagre posted a link to a Le Monde article headlined "'Pandora Papers': how the United States became a major tax haven" on LinkedIn, to which he added the observation that "if the United States is at the top of the ranking in terms of financial opacity, it is largely related to the non-reciprocity that the United States shows in the application of the #FATCA agreement."

The UK-based Tax Justice Network noted that after the ICIJ published its first major package of articles based on leaked documents in April 2016, which it referred to as the Panama Papers, a "public outcry" followed, which saw governments around the world moving quickly to adopt new tax transparency measures.

"But they stopped short of full transparency," the TJN added, in its formal response to the latest ICIJ tour de force, written by its chief executive, Alex Cobham.

"We need full transparency so we can hold tax abusers accountable, especially when our politicians are among them.

"U.S. President Biden must match his own rhetoric on shutting down global illicit finance, and start with the biggest offender – his own country."

Another view, meanwhile, was shared by Ross McGill, the founder and chairman of Hampshire, England-based tax and regulatory specialists TConsult, who is an expert on FATCA, and the author of some ten books on regulatory compliance, technology management, anti-tax evasion frameworks and withholding tax.

"The big question" that the ICIJ materials don't answer, McGill noted, remains "whether the financial institutions holding the accounts of those entities [named in the ICIJ materials] have already reported then under FATCA , the Common Reporting Standard, DAC6 [an EU tax data reporting program, now in its sixth version] or, in the case of a multinational enterprise, under MNE, under BEPS [base erosion and profit-shifting]?

"If [they have reported them], then all that the Pandora Papers serve is media interest – because the system would be working.

"If not, then they serve as an evidence base to enable governments to design improved rules to close more loopholes."

Among the most relevant findings contained in the Pandora Papers from the perspective of the U.S. as a "secrecy jurisdiction" was what one of the ICIJ articles said was "a burgeoning American trust industry" that it said "is increasingly sheltering the assets of international millionaires and billionaires, by promising levels of protection and secrecy that rival or surpass those offered in overseas tax havens.

"That shield, which is near-absolute, has insulated the industry from meaningful oversight and allowed it to forge new footholds in U.S. states," this article, published on Monday and written by three journalists assisted by a team of researchers, went on.

The article noted that the industry comprised of trusts held discreetly on behalf of international clients in such states as South Dakota, Alaska, Delaware, Nevada and New Hampshire began to gain a foothold before FATCA was signed into law in 2010, and came into force in 2014, but said it had grown significantly over the past decade. In South Dakota, for example, "assets in trusts more than quadrupled" over the past 10 years, to US$360bn," while one of the largest trust companies in the state reportedly now has "a roster of international clients from 54 countries."

The ICIJ article includes a response on behalf of the industry from Bret Afdahl, director of the South Dakota Division of Banking, who is quoted as saying that trust companies in that state are required to confirm the identities of all their customers, and that foreign clients and assets received additional scrutiny.

He also told the ICIJ that the state seeks to audit trust companies at least once every two years, and can penalize firms that do not meet standards.

The ICIJ cited un-named critics as saying that this oversight is "limited, regulations are vague and trust secrecy is nearly impossible to breach."

Other takes on the Pandora Papers findings

The UK's Daily Mail thought that what made the Pandora Papers interesting was the fact that "America's wealthiest" individuals, unlike the "elites" from other countries, "do NOT appear", which it suggested was "because the ultra-rich [in the U.S.] pay so little tax they don't need havens".

The article makes reference, via a Forbes report, to a report published earlier this year by ProPublica, another investigative journalism organization, that revealed how some of America's wealthiest and best-known citizens apparently managed to avoid paying almost any federal income taxes between 2014 and 2018.

"The dump of more than 11.9 million files has turned up the heat on elites from King Abdullah of Jordan to [the] alleged mistress of Russian President Vladimir Putin," the Daily Mail article notes, referring to the latest ICIJ findings.

"Experts say that's because the tax laws in the U.S. are already so generous; others suggest that this may be because other locations like Cayman are used.

"Donald Trump is mentioned, due to links to a hotel project in Panama; however, the trove does not reveal anything significant about Trump's finances." 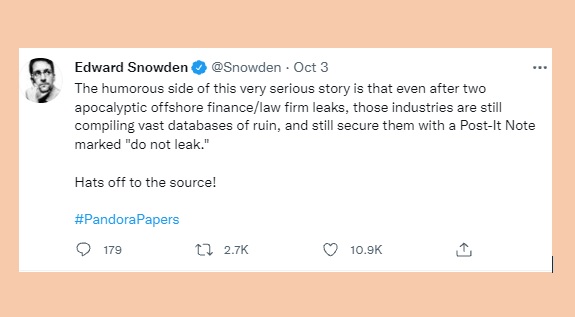 As the Daily Mail's coverage noted, Edward Snowden, the former U.S. government computer intelligence consultant who has been in the public eye  – and U.S. government's crosshairs  – for almost a decade as a result of his revelations of classified U.S. government surveillance programs in 2013, saw a slightly humorous side to the way ICIJ journalists were able to, yet again, mop up supposedly-secret data, some of which allegedly tied world leaders to secret stores of wealth.

Such files, he noted, were still being "secure[d] with a Post-It Note marked 'do not leak.'"

"Hats off to the source!" he added.

Finally, perhaps one of the most unexpected comments on the latest ICIJ document came from Richard Murphy, one of the original founders of the UK-based Tax Justice Network, who, among other projects is a director of someting called Tax Research LLP. In an article on his blog entitled "The real message from the PAndora Papers is that it is the fight to save democracy that is the big offshore issue now," he argues that at this point, in actual fact, "there is remarkably little tax evasion going on," and that instead, "the big issue...is the assault on democracy, and populist politicians are doing all they can to aid that."

He went on: "I have long argued that offshore's real purpose has been to act as an aircraft carrier, from which assaults on democracy could be launched. One way to achieve that was by denying revenue to democracies.

"I would suggest past tax justice campaigns are solving that, as is the OECD.

"But the action required now to really know about the funds flowing into countries like the UK, which is vulnerable to this assault, is not being delivered – because there is no consensus that the accounts of all limited liability entities should be on public records in all jurisdictions, althugh that data is obviously necessary both for effective and fully functional commercial markets, and to make sure abuse from illicit financial flows can now be identified and stopped."

More in this category: « House of Reps' Maloney and Salazar head up latest effort to bring Covid vaccines to expats ACA calls on Congress to 'investigate' expats' exclusion from Child Tax Credit improvements, while taxed for unobtainable healthcare »