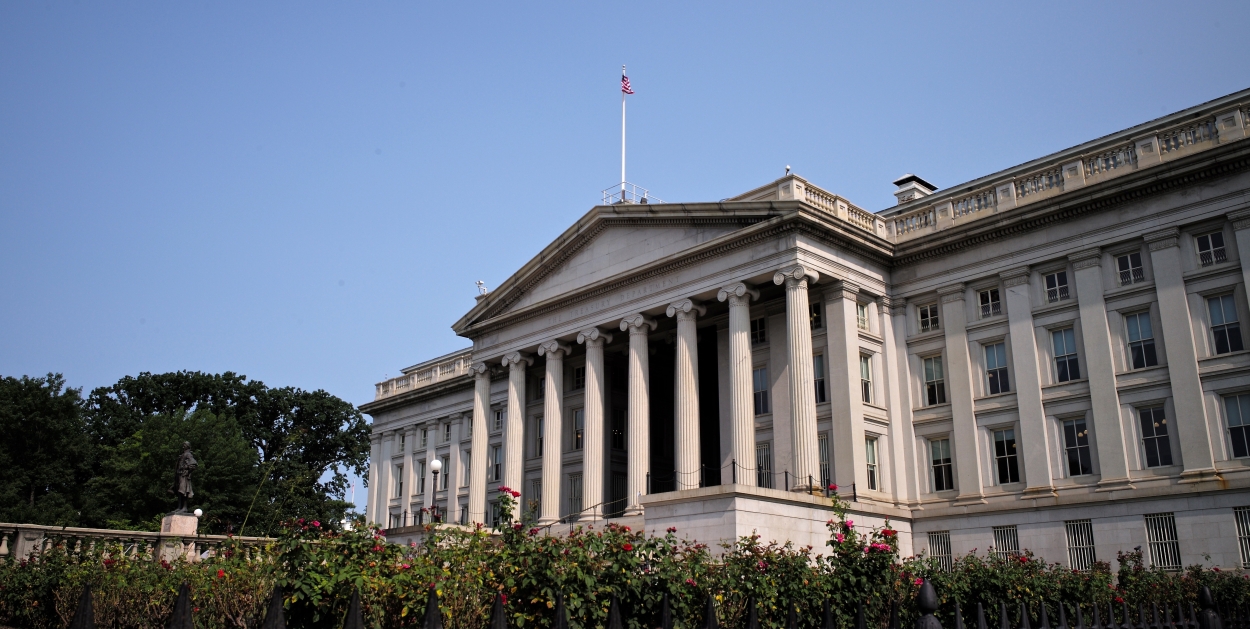 Senate Democrats have unveiled a revamped version of their plans to require U.S. banks to report their customers' account information to the Internal Revenue Service on a regular basis, in response to significant opposition from Republican lawmakers, the banking industry and U.S. taxpayers.

In a statement on Tuesday, Senators Ron Wyden (D, Oregon) and Elizabeth Warren (D, Massachusetts) announced changes to the party's controversial bank-account reporting plan that included raising its key reporting threshold to US$10,000 from US$600, and added an exemption that would spare many workers and retirees the need to report.

The lawakers' statement coincided with the publication on the Treasury's website of a Fact Sheet detailing the Democrats' revised plan, and the reasons it was being introduced.

"The only way to ensure that upper-income taxpayers pay what they owe is by giving the IRS the resources and information required to close the tax gap," the Treasury website statement says.

"The Administration's compliance proposals will do just this by providing a bit of additional information and making transformative investments in the IRS, such as hiring enforcement agents who are trained to pursue tax evasion by sophisticated, upper-income taxpayers."

As reported here last week, the Democrats' plan to require U.S. banks to report their customers' account information to the Internal Revenue Service on a regular basis was hit from the outset by criticism from banks and other financial institutions and organizations representing them, as well as individual taxpayer groups and, of course, the Republican party.

"Target Tax Cheats, Not All Taxpayers" was the headline of the American Bankers Association's opinion on the matter, on its website, which was followed by the sub-head: "Proposal in Congress would force banks to share bank account information with the IRS for most customers".

As reported,  a Republican member of the House Ways and Means Committee, Rep. Drew Ferguson, last Friday introduced legislation that would block the Biden administration's controversial plan to require U.S. banks to report their customers' account information to the Internal Revenue Service annually, citing "strong concerns" about the proposed legislation's possible effects on taxpayers' "privacy, the IRS's ability to safeguard private bank account information, and undue burdens on families and small businesses." Another Republican, ranking member of the Senate Finance Committee Mike Crapo of Idaho, delivered a 15-minute message to the Senate earlier this week on the subject, and is now calling for more details on the revised version of the plan to be published.

Expatriate Americans and organizations representing them have also been speaking out, pointing in particular to the unintended and significant effects on expats that a similar legislative effort introduced in 2010, in order to monitor on the overseas financial accounts of U.S. citizens – the Foreign Account Tax Compliance Act – was continuing to cause expat Americans, eleven years on.

Indeed, the amount and ferocity of Stateside opposition to the Democrats' original "tax compliance proposals" has been observed with particular interest by some of the few expatriate Americans and others who remember the way FATCA was quietly signed into law on March 18, 2010, buried deep inside a domestic jobs bill called the HIRE Act, without so much as a word of opposition published or broadcast in the mainstream American media at the time.

One Europe-based trade journal that did happen to cover the news of FATCA's being signed into law the day after it happened described it as a "crackdown on offshore tax shelters" that was said to have been included in the HIRE Act in order to help offset its US$17.5 billion costs.

The artice noted that, in order to do this, the HIRE Act had, "at some point in its progress through Congress, subsumed an earlier piece of legislation known as the Foreign Accout Tax Compliance Act, which in turn [had] evolved out of the [never-signed-into-law] Stop Tax Haven Abuse Act of 2007."

"In the U.S., the focus of press coverage has been on the HIRE Act's aim to reduce the 9.7% jobless rate," the trade journal article went on.

It then quoted Josh Matthews, one of the founders and partners of a then-recently-launched London-based wealth management business called MASECO, as presciently flagging up the fact that non-U.S banks and custodians who wished to continue working with U.S. taxpayers going forward, in the wake of FATCA's passage, would "have to invest time, effort and money into significantly changing their client take-on process, client review process and their U.S. tax reporting capabilities, among other things."

Matthews added – again presciently – that many banks and custodians would "not want to do this for what is typically a very small percentage of their client base."

He went on to note that at that point, even though FATCA at that point had been signed into law, "only a few of the trustees and custodians that we have spoken with even know they have a problem".

Even before FATCA began to come into force in 2014, Matthews's observation that many non-U.S. banks and financial institutions would not want to look after American clients as a result of its IRS reporting requirements began to be proven to be correct. Even now, many non-U.S. banks and financial institutions continue to refuse to accept American clients, particularly those that are targeting a budget-conscious clientele.

U.S. citizenship renunciations also began to take off as soon as FATCA was signed into law, as a Government Accountability Office report in April, 2019 noted, even after the U.S. initially began to charge a US$450 fee to do so. The renunciations continued to grow even after the fee was raised to US$2,350, alongside an "expatriation tax" for those would-be renunciants with a net worth of US$2 million or more.

According to that GAO report, FATCA contributed to a "nearly 178%" increase in the rate of citizenship renunciations between 2011 and 2016.

The trend has continued, with the number of renunciations processed in 2020 the most in any calendar year ever, in spite of the fact that U.S. embassies a consulates around the world – which are needed to process such renunciations – were closed or offering reduced services for most of the year.

Advocates for fairer U.S. treatment of American expats, meanwhile, say that while it's indisputably a good thing if U.S. lawmakers have learned a lesson from the problems FATCA has caused – if this is, indeed, among the reasons for their opposition to the proposal to introduce a similar regulation aimed at monitoring Homeland Americans' bank accounts – it suggests that these same lawmakers ought to also be calling for FATCA to be reviewed.

Advocacy groups such as the American Citizens Abroad have long called for Congressional hearings to be held to examine the way American expats are taxed, with a particular focus on the U.S. system of citizenship-based taxation, which no country other than Eritrea practices, and which is said to exacerbate such regulations as FATCA.

One American lawyer who works in the cross-border legal space, meanwhile, says he thinks much of what is being said about FATCA and the Democrats' proposals for a Stateside law requiring banks to provide more account information to the IRS is wrong, and that the objections being stated have been "significantly overwrought."

Because his views are so far from the mainstream he requested anonymity.

"Just about everyone I know says, sometimes in whispered tones, that there is a surprising amount of non-compliance," this lawyer began by saying, adding that this was what, finally, led to FATCA being brought in, and, he insisted, "not...under a veil of darkness, there is no veil of darkness in Washington."

Also contrary to what is routinely said, he went on, "I have no doubt that FATCA is effective in bringing people into compliance. [The bottom line is] that many, many people are filing and paying taxes because they are afraid to death of getting caught. And rightly so."

That said, he believes Congressional hearings would be a step in the right direction, and would probably lead to a move by the U.S. to a residence-based taxation system, which he regards as "not a big deal" and would not "blow open the doors to cheating by wealthy people. And RBT, of course, is the answer, for Americans abroad, to the harsh implementation of FATCA" that many are currently experiencing.

What the revised Democrats'
plan for bank scrutiny looks like

Under the revised "tax compliance reform" plan, as outlined in a just-published U.S. Treasury Department Fact Sheet, ordinary wage and salary earners, as well as federal program beneficiaries, are to be exempted from the program's reporting requirements, on the grounds that the IRS "already has information on [their] wage and salary income, and the federal benefits they receive".

As for other taxpayers, the Treasury argues that its proposed reporting program will see U.S. financial institutions and banks add "just two additional numbers to the information that they already supply to taxpayers and the IRS: the total amount of funds deposited into the account, and the total amount withdrawn over the course of a year."

In addition, "the scope of this information-sharing is extremely limited," the Treasury Fact Sheet says.

"The rationale for this reform is that the IRS can use this additional aggregate information to focus its enforcement efforts on wealthy tax evaders, with an improved ability to identify tax evasion and to decrease audits of compliant taxpayers."

"Any additional reporting will be minor," the Fact Sheet states in this section, while "it cannot be emphasized enough that this proposal does not involve raising taxes on any taxpayers. Instead, the proposal is designed to collect taxes that are already owed under current law.

"This is an economically efficient and progressive way to raise revenue."